Anything about BXs
Messages: 163

Kitch wrote:Got to admit, this is the most hardcore work I've ever seen anyone do themselves DIY style.
We're rebuilding a Frogeye Sprite, but all the welding etc was done by a welder, painting by bodyshop etc. All we're doing is stripping and rebuilding.

Kitch wrote:Got to admit, this is the most hardcore work I've ever seen anyone do themselves DIY style.
We're rebuilding a Frogeye Sprite, but all the welding etc was done by a welder, painting by bodyshop etc. All we're doing is stripping and rebuilding.

After seeing this its not even worth doing it

Not my sort of hardcore but whatever floats your boat!!!

I really wanted to get the car finished by close of play wednesday (gota go back to work thursday), and if I cut alot of corners I think I could get it done, but in reality, it aint gona happen. I dont really wana cut corners since everything thats been done so far has been done to the best of my abilities (i.e. badly!).

So I reckon I'm looking at another 2 or 3 weekends.

Finished the welding at the back today.
Ended up making 6 small plates for the sill/ wheel arch: 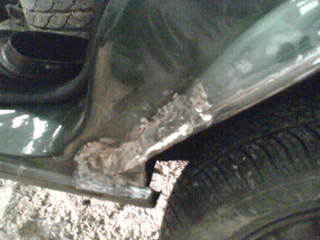 Then trial fitted the 1/4 panel (just to make sure it still fits! 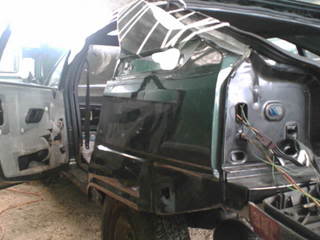 Placed all the sound deadening in and laid the carpets, then plumbed the turbo gauge back in (and it still works) 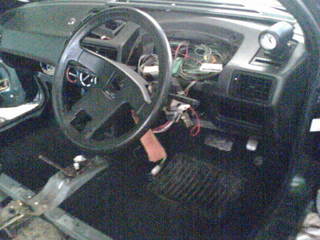 Then I wheeled the car out to have a clear up and turn her around so I can get easier access to n/s tomorrow, and couldn't resist taking a few piccies! 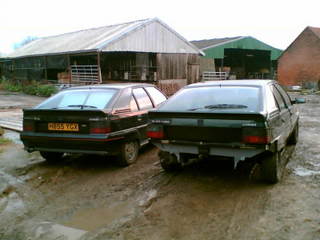 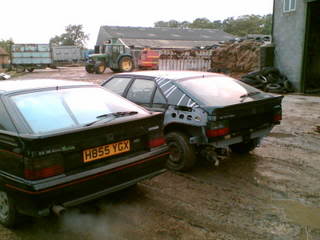 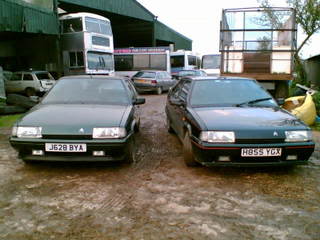 Hopefully tomorrow I'll have the dash finished, the stereo in and the remaining panel work done at the back........

docchevron1472 wrote: I really wanted to get the car finished by close of play wednesday , but in reality, it aint gona happen.
So I reckon I'm looking at another 2 or 3 weekends.

That's still going to be a massive achievement even then.

When you`ve finished it mate I reckon you should do a single thread with all the pictures and descriptions. I wonder if Jon (or one of the mod`s) could then post it up as a permanent `sticky`, as your incredible efforts and skills should remain for all to see?
For the technically incompetant like myself you`re already a legend in BX terms Doc and I`m sure an inspiration to others too.
I`m also jealous of your storage facilities you lucky so-and-so, is that an A40 Farina in the back ground by the way?
Vauxhall apologist.
Top

is that an A40 Farina in the back ground by the way?

I think its probably a John Deere Cavmad

Actually Doc, I'm getting annoyed with you!!! you're making me feel very lazy and inadequate

Only kidding mate, its great seeing the piccies and watching how its going. This could possibly be the finest BX around when its done which simply makes our own BXs look cr*p by comparison....you devil

It does look great mate, its spurring me on to get my16v as good as I can get it!
Top

BX Bandit wrote:Actually Doc, I'm getting annoyed with you!!! you're making me feel very lazy and inadequate

That`s odd, you seem to have managed that on your own

(Yes, I was only joking)

Nice one Jon, Chris thoroughly deserves his own spot for all his hard work.
Vauxhall apologist.
Top

cavmad wrote: is that an A40 Farina in the back ground by the way?

Blimey, thanks all. I never realised this would cause such a stir! I figured a couple of technoheads would be interested.........

It was an A40 Farina Billy! My bro was given it for nowt with MOT! Drove it round till it fell apart (the boot lid was held on with gaffer tape when he got it!!), it's now doing sterling work as a scrap metal bin, when it's full up we'll weigh it in and start filling another scrapper with steel!!!!

, spent most of the day trying to get the bl**dy 1/4 panel to fit.
In the end I had to compromise slightley at either end but the panel gap between the wing and the door is a bit questionable. If dad is happy with it then thats fine but if he isn't I'll rip the f%^&*ng lot and start again! 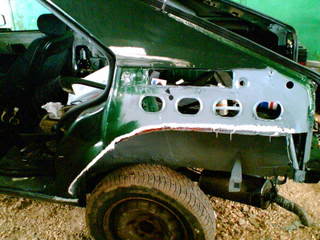 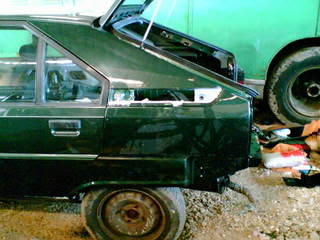 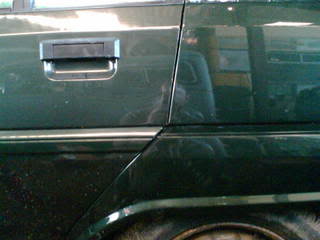 I'm not too unhappy with it since I think the door will adjust enough to make it look ok but it aint my car... I dont think dad's actually seen the car since we trailored it away (unless he crept up when I wasn't there?!?!)
so I'm hoping he'll be happy with what I've done....

With the bumper on though it finally looks like a car again!
and the automatic badge very kindly donated by Philip Chidlow finishes the back off nicely! 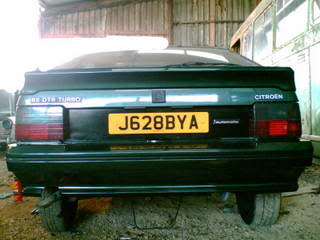 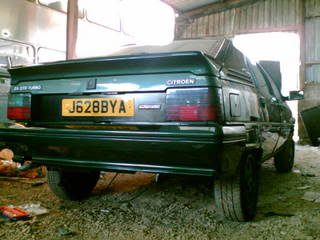 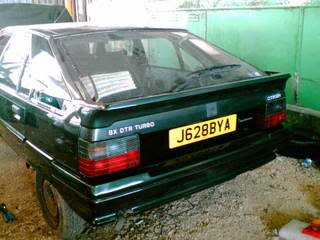 Now I just need an appropraite badge for the left hand side of the number plate.... I have something in mind I'll have made!

Since Halloween is approaching here's a piccy of the doc in axe murderer mode!! 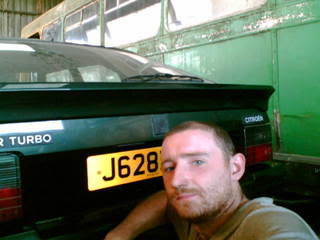 I've got one day left before going back to work and however much I'd love to stay off till the cars done the bank would send out a hit squad but I'll see how much of the interior I can get done tomorrow!

Oh, and Mr. bandit, believe me matey I'd much rather this had never happened and we could have continued the gradual upgrade that we were doing..... But needs must when the devil rides!

Needs must is right mate, the upgrade can wait...your Dad need his motor!!

but what you should do now is