Anything about BXs
Messages: 96

Yep, really cant add anything to wahts already been said. All good advice.
Get a good solicitor and screw the other side. Having seen the piccies, there's absolutley only one person at fault here. It's not just the pisspoor amount offered for the car, and the laughable amount offered for personal injury, it's the inconvenience you're incurring. And dont let them forget that their insured driver could have killed you, as I said before, that was a HUGE impact, on a straight road with excellent long range visibility. There is NO excuse for what happened other than reckless driving. The police should be doing the twat for driving without due care etc..

Differing circumstances, but one of our guys in work got badly injured when a lorry hit the side of one of buses, the truck took most of the O/S of the bus out, opened it up like a tin of beans.
The offer the truck drivers insurance comapny offered was beyond laughable (our driver was unconscious for a day and spent three weeks in hospital,and he never felt safe behind the wheel of a bus again and left the job soon after).
The union solicitor got on the case and our driver got £115,000 which was 100 times more than the initial offer.
Like I said, different circimstances, but the principle remains the same. This was not your fault, you and K were injured, and you've been inconvenienced. For the other parties insurer to argue the toss is typical, but it's also every form of wrong imaginable.
Smokes lots, because enough's enough already!

K's solicitor has agreed to handle my claim as well. Everything's in her hands now, and she sounds pretty positive.

Insurance companies are behaving... oddly. Mine has already sent me the £300 cheque for the car (which I am not planning on banking) and made arrangements to take the car away - despite the fact that I have told them every time I've spoken to them that I want to get it fixed.

I went to visit the car last night for the first time since the crash. Not a pleasant experience, and it is much worse than I realised at the time.

I took some photos. The full set is here and here are some choice ones: 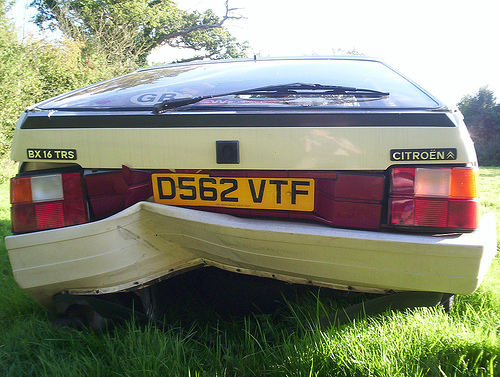 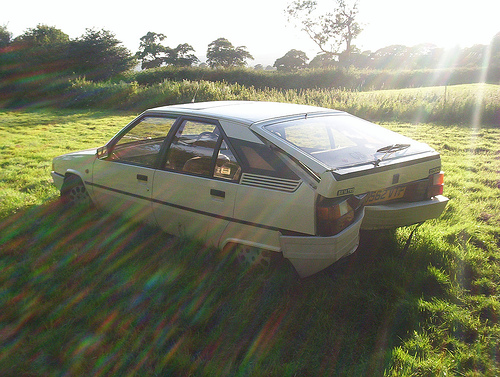 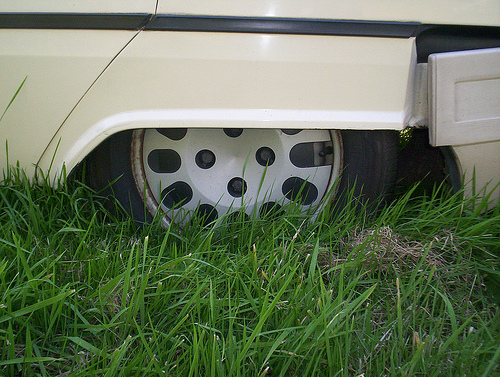 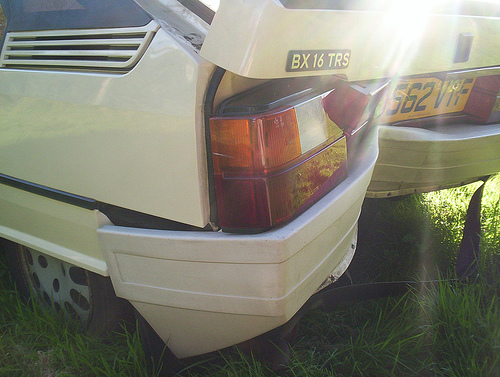 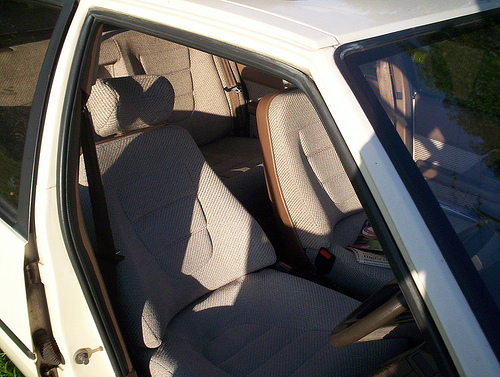 See how the driver's seat broke when I was forced back into it. It's twisted round, and the mechanism's broken so it doesn't come back up. I guess that's happened and the passenger seat is OK because my foot was on the pedals - I came to rest with my right foot jammed hard down on the accelerator pedal. It also explains why my back feels so much worse down one side. I hadn't realised how much I twisted. 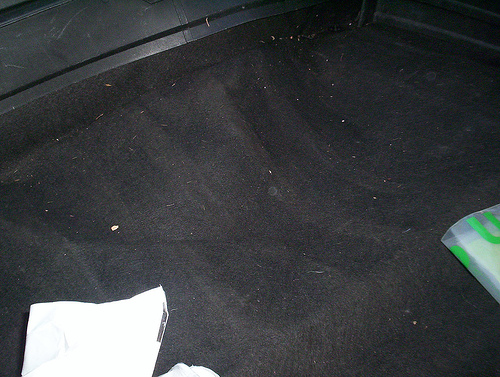 Christ! Was aheck of shunt, fixable but not a 5 minute job! You can see the n/s quaters been pushed up against the door, shame the rare tailblazer has broken.

If it was me I dont know what I would do,, needs a boot floor, rear light panel, tailgate, bumper, lights.
Top

Just a thought, Stu.
It might be an idea to get the car moved from its present location, in case the insurance company send round a truck to pick up the car while you're not around!
As Tim says, looks like a heckofabang!! Probably fixable, but looks like quite a lot of welding needed! I reckon Doc's experience of rebuilding rear ends would come in handy!

Main thing is that you and K are OK.....cars will fix, humans may take longer!

Sounds like the solicitor is up to the job. The insurance companies involved will squirm like fish on a hook, to avoid paying more than they really have to, but in the end you SHOULD get what you deserve from them!

Good luck, and keep us up-to-date with proceedings. (See you at Stratford??)

Did you make the claim through your insurance or through the other persons?
If you make it through yours, they will value your car, issue you with the payout and subtract yoru excess, which they will refund only when they get the money back off the third party.

What you shoud have done really is inform your insurance of the accident but tell them you will be claiming yourself against the other insurer. You may have a battle on youe hands now to make your own company not count this as a "claim". A mistake I made years ago when i had F/C insurance on a car that was shunted from the rear.
My insurers still classed it as a claim despite recovering all costs.

Leave this in the hands of the solicitor, and still insist your car is repaired to its pre accident condition by the third party insurer as it looked to be a lovely example pre accident.
Good luck - and remember the above is not formal legal advice but just my opinion!
Top

marty wrote:Did you make the claim through your insurance or through the other persons?
If you make it through yours, they will value your car, issue you with the payout and subtract yoru excess, which they will refund only when they get the money back off the third party.

What you shoud have done really is inform your insurance of the accident but tell them you will be claiming yourself against the other insurer. You may have a battle on youe hands now to make your own company not count this as a "claim". A mistake I made years ago when i had F/C insurance on a car that was shunted from the rear.
My insurers still classed it as a claim despite recovering all costs.

I've got an awful feeling they're trying this, yes.

Of course I rang my insurers to inform them of the accident - that's what you're meant to do. I was very careful to say that the other party accepted liability at the scene. Obviously not careful enough though

I also called his insurance company, partly to make sure he had. They have made me an offer for the injury. My own company has made the offer for the car. Odd.

As for whether it's fixable... I'm no expert, but it's worse than I expected. I don't want to build my hopes up too much so I'm assuming it's scrap until the Doc has cast his eye over it.

Dave, I probably won't be at Stratford. I've got two Morris events on that weekend and I was thinking about having a house-warming party too!
Top

Ouch! Thats worse than I expected

It's repairable, but then anything is. To actually repair that would be a mammouth task.....look at the door shuts in the quarter panel....the whole floor etc.

I hate to say it, but it's a dead'un IMO. The effort put into repairing that would be better spent on another BX that needs help. That's got enough in the way of good spares to make another nice car and keep the faith going, if you know what I mean?

There was a £500 Digit offered in the window of an estate at the CCC rally. Pursue that?

I have to say, IMHO, life's too short. Say goodbye to old girl (I am sad to see that smashed tailblazer, having seen your glee when it was fitted at the National), but glad you're both OK.

From memory the going rate for whiplash is almost two grand these days, no mercy Stu

Kitch wrote:There was a £500 Digit offered in the window of an estate at the CCC rally. Pursue that?

I didn't see that Digit. Anyone got further details?

What's the situation with the GT, Adam? I've got a good source of panels for it now

I'm in the process of arranging to collect the GT from Adam at the end of this month!
Adams off to France for a few days soon, so I'm going down the weekend of the Stratford Meet, to see if we can get it running well enough for the trip back up North the following weekend.

Don't give up on Snoopy yet, mate! I've seen worse cars fixed up and running again. I guess much depends on any structural damage, apart from the floorpan. Rear quarters, back panels, tailgate, etc. can be replaced....but if any rejigging is required then it makes it a whole new ballgame!
The rest of the car is certainly worthy of a rescue mission, if it's at all possible!
If you do eventually break her up....can I have first dibs on the bonnet?

What happens to Snoopy is really going to depend on the insurance now so we will see. If it's decided that he's going for scrap, I'll do my best to keep hold of him as a source of spares for the Club. You're welcome to the bonnet!
Top

With the number of Mk1's reducing all the time, certain spares will become increasingly harder to find. One item that comes to mind immediately is the upper half speedo cable! Adams GT needs one!) These are different from the Mk2 fittings, and are pretty hard to find.
No doubt there are many other Mk1 specific things, that would be worthwhile saving, if possible, before Snoopy gets cubed!

I wonder if Docs farm would class as a scrapyard?

I agree with Kitch - as the back door shut has closed up then the structure has suffered severely. In fact its done exactly what it was designed to do which is to spread the load throughout the structure thereby absorbing some of the impact and reducing the forces to which you and your partner were subjected.

My guess is that if you look carefully you will find creases round the back seat somewhere as well as stretched spot welds along the 'chassis' members. While its possible to repair almost anything I think you will have a very difficult job. Having said that the 'Trade' can do amazing things with hydraulic rams etc - all of which can, I expect be hired from specialists.

Otherwise its a question of unpicking the welds very carefully, straightening or replacing panels and re-assembling with extreme care to get the thing straight.
Top

How about this one as a temporary replacement, take the screen off yours & fit to this one, sorted