Tell us about life with your BX, or indeed life in general!
Messages: 413

54mpg is still a bit thirsty for me

I also looked at insurance, £250 for a BX TD, more than my wifes 05 Grand scenic

If the right GTI came up though

I insured my 1990 Gti 8valve on a classic policy for £140. Insurance is so strange though, you'd have thought a much more expensive newer car would cost more to insure, but no

Like most things, if you shop around then i'm sure you can get it cheaper, i only pay £180 fully comp to run my txd & its our main car

MULLEY wrote:How many mpg do you get from your bike?

I have bought a potential replacment though. It needs a good service but by the end of the week I will be riding a Suzuki SV650 sport

Did a 400 mile round trip to fetch it though 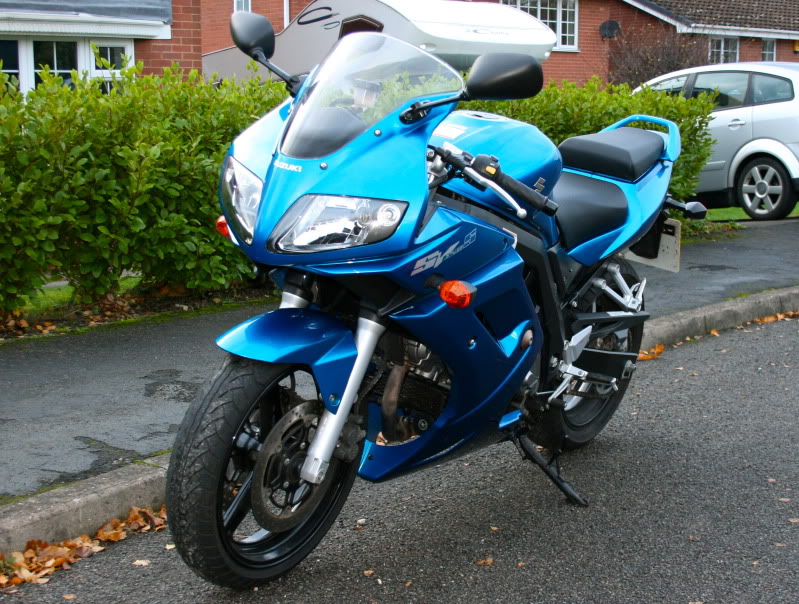 Changed my tyres over to winter boots today, did a bit of rust correction on the rear sill & painted it up. Also did the same with the rear wing while i had the wheel off where there was a bit of rust bubbling coming through.

Managed to take the horn off, gave the connectors a clean up, still doesn't work

Sunny Wakefield today to see my mate Ken, as per usual he's a gent & a legend, learnt a lot today.

All you's saying its a 5 min job to change the glow plugs, erm no, even Ken i think was surprised by the lack of access, the main air pipe to the airbox was taken off & then the top plastic cover that sits above the engine to make access at least possible. We compared my set-up to Ken's motors, & his deffo seemed nicer access than mine, well it is my car afterall & as i've found out over the years although it's a good un, it does have unusual things happen to it that have never happened before

There were 2 dead glowplugs, so i must have been doing well to get the bugger to start when it was approx -10

Also replaced the crank seal at the pump end as it was leaking. Re-tightened up the belt as well, was going to put a new belt on but realised the one i had must have been for my gti, so it was waaaay to big

At least i know how to do it now, so i'll get a replacement belt shortly & fit it when its warmer.

Ken kindly looked at the handbrake cables, nowt wrong with them, it would appear that they were iced up when they were one, when i released the handbrake the cables stayed in place & came off the runners, so just had to re-attach & now i've got my handbrake back & working great.

Bit of duct tape over the main pipe that goes into the thermostat, it was showing a bit of wear where the air pipe was rubbing it, hopefully keep that going for a bit longer.

I'm booked into Westroen next week to get some nice rear spheres fitted, so looking forward to the ride & handling to improve, it currently feels like a normal sprung car

Now what else needs doing

Erm yes, i knew what i meant

Satnav decided to take me across snake pass today

stupid thing, luckily conditions weren't too bad. I even got overtaken as well, either the geezer is finnish, has winter tyres on was mad

I did slow down & let him pass though.

Made it to Westroen & Doug sorted out some nice rear spheres, the old ones had about 10 bar of pressure left in them, so at least they weren't totally knackered & therefore he can re-charge them for another lucky bx owner. Checked the accy sphere as well & decided to change that, so all in £90 & fitted, i'm happy, cheers Douglas

He also spotted that the bolt which holds the camshaft circular disc was loose, so loctited that back on for me, glad he spotted that as i could have been unlucky & that could have ended up somewhere with consequences.

Camshaft circular disc?
Whats one of them then??
Smokes lots, because enough's enough already!

I thought exactly that too Chris, when I first read the post.

I'm only guessing at Matt's Technical Description, being that his BX is an oil burner that he's trying to describe that it's the exposed drive pulley fitted to the end of the camshaft (which drives the HP pump), whose retaining bolt was loose !

RxBX wrote:
I'm only guessing at Matt's Technical Description, being that his BX is an oil burner that he's trying to describe that it's the exposed drive pulley fitted to the end of the camshaft (which drives the HP pump), whose retaining bolt was loose !

I well, that could be down to me I suppose