Interesting read so far. I notice your seatbelts are mounted to the floor. It has been suggested that in the even of an accident you can cause yourself some serious damage by doing this.

I have only scratched the surface, but most people recommend an FIA approved roll cage in the first instance, but at the very least a harness bar. It may be worth having a little google for some options/opinions.

Alfaman, you're right - I have been warned off this by a couple of others as well. I don't want to fit a cage because of the insurance hike that will no doubt accompany it! I might look into a harness bar.

Also, all my pictures have stopped working - oh dear. I must buy some more webspace...
Good heavens! My signature's been moderated...
Top

So the last post with any real meaning was August 2008. Bugger.

Since that time I have done - well - sweet FA frankly. But I think 2012 really should be the year to get something done with this car, even if it's just setting it on fire (I jest of course, it's uninsured, what would be the point?). So over new year I decided to attempt to raise it from the grave.

On inspection I found squirrel droppings on the rocker cover gasket, clear signs of small furry life in the engine bay and a total lack of coolant. Things not looking good really. I stayed positive though, put in a lot of neat antifreeze (a magnificent example of shutting the stable door three years after the horse had bolted, retired and died peacefully) and checked the oil level. Looked good, so I put in a half-charged battery, disconnected the dizzy cap and tentatively turned it over on the starter. It turned over. So I reconnected the dizzy cap and had a go. After ten turns or so -

Not only that but after a while longer,

Alleluia! So next order of business was sort out the tyres. I had laid it up on one space-saver and four alloys. Nearside tyres were fine. OS front had deflated (dodgy valve cap). Luckily my dad recently bought a 405 Executive. Unluckily it turned out to have the structural integrity of a fondant fancy that's a week past the sell-by date. Luckily he kept the alloys so I could bung them on the BX to get it moving. Wheel swap completed, I ceremonially put the centre cap back on the steering wheel and tentatively put it in gear and drove it for the first time in over three years!

Only a few yards mind you but it felt good. Here is evidence. Phase 1s are the best looking aren't they? 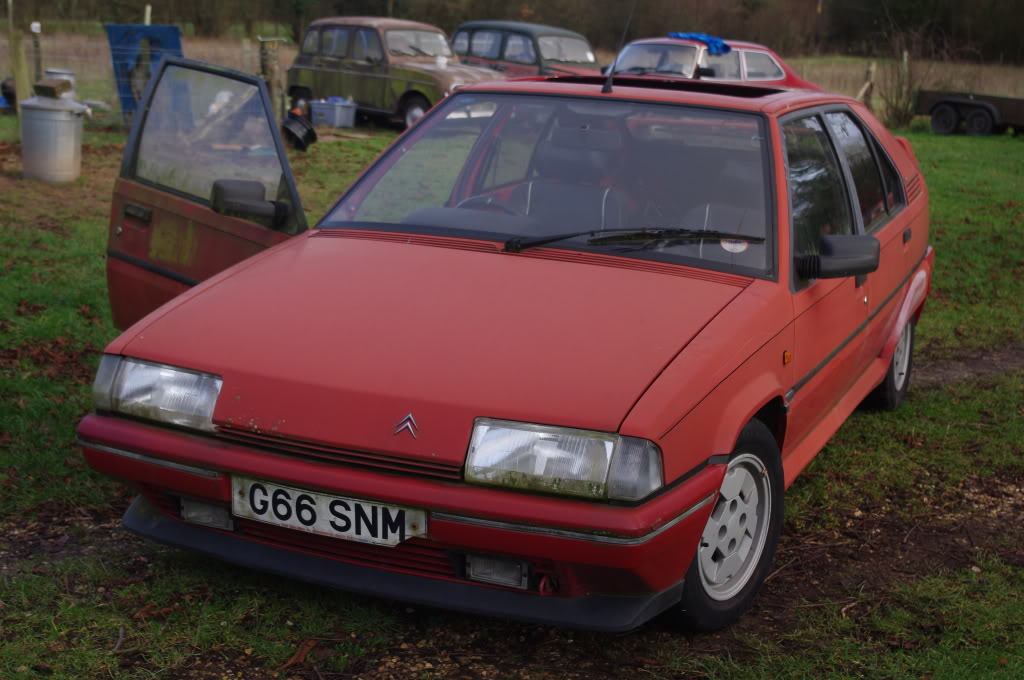 Anyway it all seems to have survived well, interior is in good shape and no evidence of water ingress. 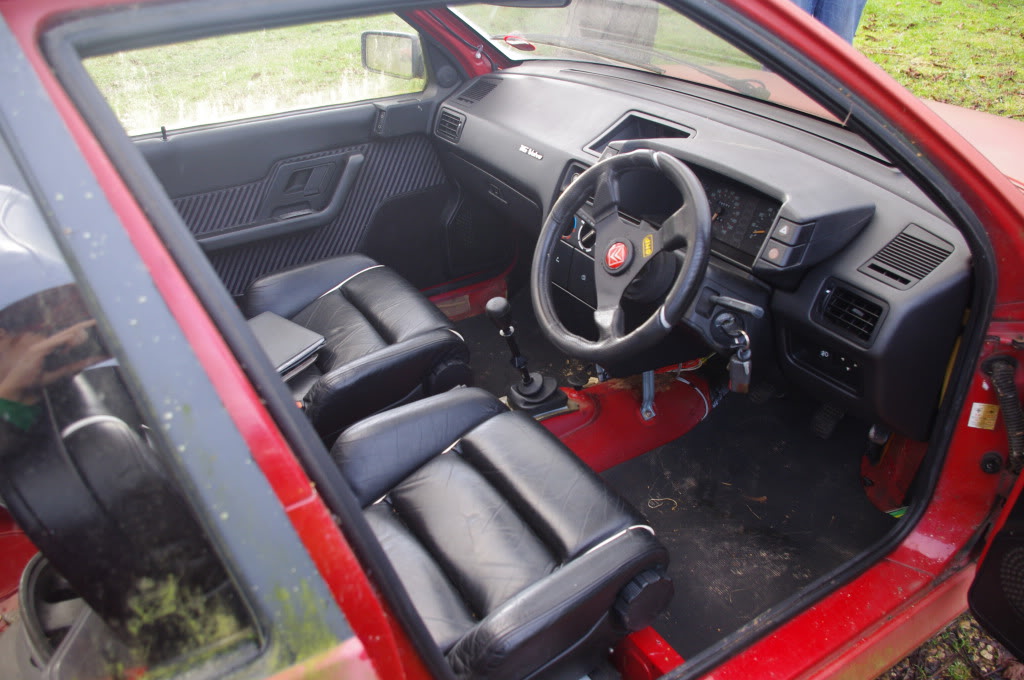 Unfortunately as I backed it into the space, it coughed, spluttered and died. I backed the last few feet on the starter and investigated, but no amount of EZstart would raise it to life again. Bugger. Still a good day though. 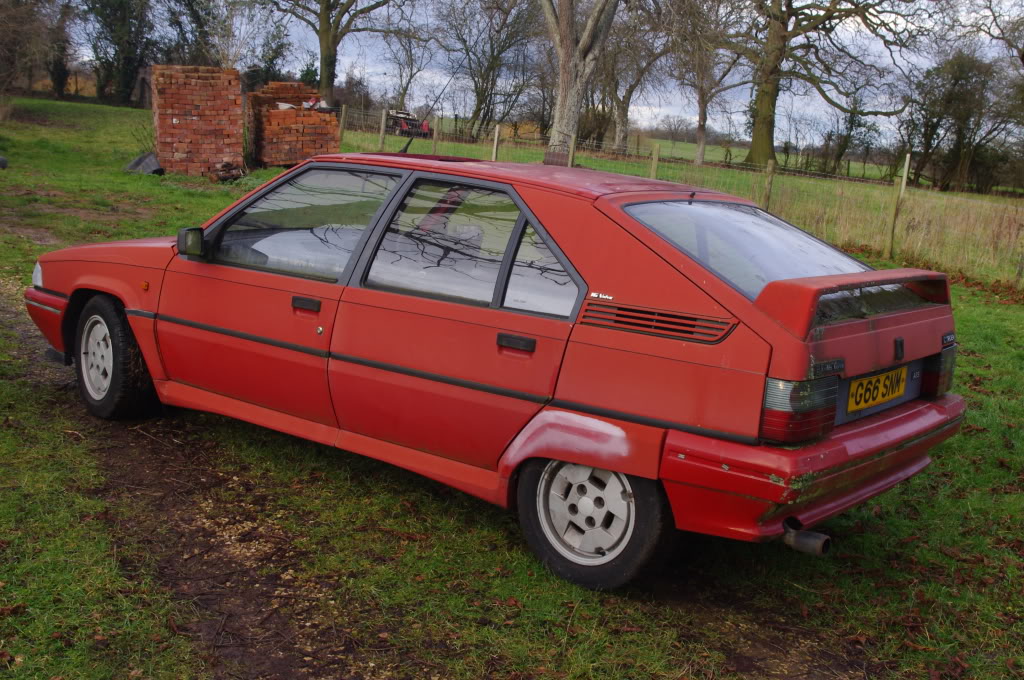 So after all of that I tried a trial fitting of one of my super-light C5 steels. Turns out I have the wrong wheel bolts for them. Oh well... bigger fish to fry right now...
Good heavens! My signature's been moderated...
Top

Defender110 wrote:Sorry to divert a little off your main subject matter but can I ask about the old Renaults in the back ground; what's the story there?

Love the matt-effect red paint on the BX!
www.classichub.wordpress.com
Top

The Renault 4s are a long story... basically the brown one is my first car, the green one is a tax exempt one with a rotten chassis but an engine that runs like a sewing machine. We have a chassis for it. Out of shot are an imported LHD one which is a daily driver and a concours sunroofed model. All are 845cc. The family have had probably 20 over the years, these are all that are left...
Good heavens! My signature's been moderated...
Top

Minor update on the non-running, no pictures (because nothing has changed) but... I suspected a weak spark of some description - that or just the effects of 5 year-old petrol - so I cleaned all the electrical connections I could see in the engine bay, the ignition amp connector in particular was completely filthy. I tried to check the condition of the plugs but neither of my plug spanners would fit down the block! Anyway, having done some cleaning and fiddling, and after my dad kindly added a few more litres of fresh petrol, I connected the jump leads to the Synergie and tried to start it while dad revved the engine (in the Synergie that is, I was revving the 16v). It coughed and spluttered for quite some time before catching again, then it would run on full throttle but nothing below it, then it finally started properly. Hurrah! Then I discovered it wouldn't run above 2500rpm... but that turned out to be because I hadn't connected a big breather hose that runs to the ICV. Anyway, after that it finally went.

I drove it! Only for a quarter of a mile or so (up parents' drive and back) but that's the first real distance it's gone since 2007. A good day.

Unfortunately, having been watertight (and rodent-tight) since 2007 it now smells like something died in there, which probably means that something's died in there. Damn! I'm going to have to take it to pieces again... let's hope it's not behind the dash...

In other news, my Saab 900 was laid up next to the BX with a clutch fluid leak. When I moved it I found a very large, very dead rat lying directly under the leaking slave cylinder

It clearly had a taste for Dot 4!
Good heavens! My signature's been moderated...
Top

Don't run your car with neat antifreeze, it will overheat.

It has far less heat capacity than water, so run a maximum of 50% mix.

Don't worry, it won't be running far enough to heat up for quite some time...
Good heavens! My signature's been moderated...
Top
Messages: 39