Pity about the house, nice car though!

Anything about BXs
Messages: 23

A week's motoring, 600 more miles on the clock, and all seems well. The dashlights turned-out to be a faulty dimmer switch, so the spares box sorted that, haven't got around to getting a fan resistor yet and haven't got a spare, which is nuisance as they're fairly expensive.

Gave it a quick wash on Saturday evening and got as wet as the car when the skies opened. Still it now looks a great deal better, and took us back to the Island on Sunday night and back home on Monday evening without missing a beat all the way. And, managed to shave 3/4 of an hour off the journey time for the TXD, mind you I drive that fairly steadily in deference to it's mileage, and by now VERY thin clutch.

One thing that has surprised me is how highly geared it is, 3000rpm gives me 70mph in 5th in the TXD, but 80mph in the TZD. A whole new driving experience, and I'm smiling all the time.
Top 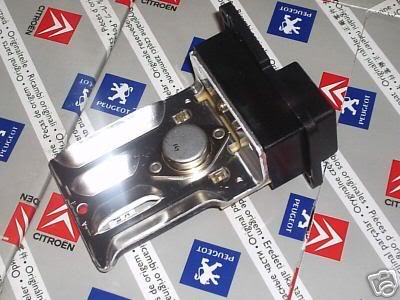 Be forewarned that this might not be exactly what you have on your TZD as there appears to be some variation in the type and location of components and at least two versions of the circuit in use. See,
http://bxclub.co.uk/forum/viewtopic.php?t=7555

From various reports it seems that there is a very good chance that it's simply a bad connection somewhere --- so it should be worth locating the various connectors and cleaning them with WD40 (including the connector to the resistor or power module).

Doz gives a good description of removing the front panel in order to access the control pcb here,
http://bxclub.co.uk/forum/viewtopic.php?t=5515
David

Can't get anywhere near 66 cars - we are probably in the 40's though, including 3 Renault 4's - one of which shares everyday car duty here with the BX diesel estate. We have found them all to be very reliable, quirky little cars, better than a 2CV cause at least the heater works and its got a hatchback.
Easily the worst we ever had was a 1 litre Metro, the only consolation was that someone else paid for it - noisy, uncomfortable, thirsty and a horrible reddy orange colour - just like the one pictured on the forum a few weeks ago! In my opinion not a patch on either a Renault 4 or a 2CV. Had a ride in a Laguna once or twice I think, but it just qualifies as 'modern porridge' - they all look the same, are all far too complicated, or is it just me getting old and reactionary.
At present the fleet consists of
BX TZD Estate - about the most comfortable car I've ever had.
Renault 4GTL - useful little runabout
Citroen Relay 2.5D LWB Hitop - much better than a Transit
Renault Trafic Eribacar camper - comfortable but a lot of wasted space.
Renault 4cv - 750cc's of rear engined fun - everyone thinks it a Fiat (in the UK anyway)
Citroen Ami 8 - cost 3 bottles of Chateauneuf de Pape and runs like a watch!
Paul in Normandy - BX 1992 Millesme 1.9D, 1999 Peugeot 806 2.1 TD (the Bus) - gone bang on the M25, in a scrapyard somewhere in the SE of England, 1985 Visa Decouvrable, 1990 Land Rover 110TD (Great Uncle Bulgaria),1999 Isuzu Trooper, 1991 Hymer motorhome with Peugeot J5TD power, and a shedfull of mopeds!
Top

paulwitchard wrote:Easily the worst we ever had was a 1 litre Metro, the only consolation was that someone else paid for it - noisy, uncomfortable, thirsty and a horrible reddy orange colour - just like the one pictured on the forum a few weeks ago!

You've both got me reminiscing. We had Metros at work, and they took an aweful amount of punishment without a murmur. We wrked 24hrs in three shifts and the cars were used by all and sundry throughout the 24 hours.

As for Amis, well I've had my share of those as well. I remember a 1970, Estate which was the family car for a few years when the kids were young. We spent a holiday on the Isle of Mull, a wonderful place for kids to run free. Reading to Oban for the ferry, overnight. Loaded Ami, Food supplies and kids toys etc on boot floor. Sheet of ply over that with carpet covering,then dog's bed and dog, Kids in the back of the car, me and spouse in front, roof rack on with two weeks luggage for a family.

Set off at 11pm, stop every couple of hours for a pit stop. Arrive Oban at 11am for the 12 o'clock ferry. the Ami managed a steady 70 on the Motorway throughout and didn't miss a beat. One of the best cars we've ever had. It's still around, I passed it on to a chap who is re-building it. Interesting earlyish model with sliding windows in the front doors.
Top

Thanks for the ideas chaps, I now have a first time starter, rather than having to kick the throttle to get life out of the engine. It's funny, I've been driving diesel BXs for 18 years, and didn't know about the trick of waiting for the relay to click out before starting. Mind you the other two always started first poke after the light had gone out.

I'll try the modification to the heater fan circuit, as soon as I can remember where I packed the soldering iron. I've no doubt that'll work just as well.
Top

Thanks for all the help chaps, and chapesses? It's nearly sorted.

Yes Ellevie, that was the right type of resistor, when I took mine out I found that the exposed part of the PCB was completely corroded. So I now have a clear screen and toasted feet.

The final job will have to be Hydraflush and a change of LHM, as the steering is becoming a little difficult at times. That's what comes of driving a BX that's been sat for a few months and is probably still on its original LHM.

A Merry Christmas to All!
Top
Messages: 23