OK, so with the arrival of the TVR into the fold, the BX has kinda been pushed out a bit

Basically we have a nice sized (all be it single) warm, dry garage here at home. However TVR's leak like seives and are not designed for the weather the ironically surrounds the country that made them! So it's now in said garage. The BX was sitting in there, but due to the fact it's getting on a bit and is starting to rot in small places now, I wanted to also garage it so I rented a garage in a block on the outskirts of Southampton for it.
Problem is it looks like with all the heavy rain, the garage is leaking! It's got a make-shift drainage system in the concrete floor down one side which fills up, although it doesn't seem to over flow. It's also damp on the other side and water is lightly dripping through the roof onto the car. When I put the car in there a couple of weeks ago, I also put my watertight cover on it, so the dripping isn't as issue.

What I'm now worrying about is that will this wetness cause more issues than before? If theres no air getting in then I'm guessing the floor will take ages to dry and surround the car in damp? That said, it's got to be ten times dryer in there than outside so is it still a good idea anyway? I'm renting it very very cheaply off a mate and I can't really keep it on the driveway here as it means parking a car on the road, and there isn't much kerb space as I now live in a cul-de-sac.

Ideas? Is the valver in danger?

I think a carport is the best idea. I really miss ours

. OK the car gets wet occasionally but the the wind quickly dries it. Garages are ok if dry.

IMHO to put a wet car in a garage is one of the worst things you can do for it. Assuming your car was dry when it went in, might not be too bad.
They think it's all over, it is now!
Top

If the garage is that wet i think you are going to get rusty locked brakes and clutch if you are not too careful.
I would tend to block one wheel and leave the hand brake off if you have to leave it in the damp this should prevent the pads from sticking to badly.
Other than that i should start the car regularly and give it a spin round the compound.
But as ken say's a car port is the way to go.
At the moment i wish i had one.
Can't weld in the rain.

The other thing that might help, if you could block the car up on ramps or something. Anything to allow airflow underneath. One of the problems with BX's, they sink so low so not much air flow.

That is a pretty cool garage! Shame I don't have the £12k needed!

I'm not quite sure what to do with it now really. The garage isn't soaking wet, but it is damp and there are puddles on the floor. I don't really have the space here....I suppose the last resort is to put it back into service and use it

Would it sitting in a garage do more harm than have it on the road during the winter months?
CCC BX monthly column writer bloke thingy - bx@citroencarclub.org.uk

Why not wait for the next dry spell and then have a go at sealing the roof with some form of bitumen roof sealant --- at least you might be able to stop the worst of the leaks.

I had my garage roof refelted a few years ago at a cost of about £450. It's best to get them done when they start leaking otherwise you could end up having to replace the wood underneath as well as the felt, which is a lot more costly.
David

Probably not a great deal of help but I recall someone telling me years back that wooden garages are the best because they absorb moisture rather than let it stand on concrete and run all over your car. Could you sort of lag the garage with wood and see if it helps?
Vauxhall apologist.
Top

I'm stunned that no-one has thought of the bleeding obvious here.

You have two cars neither of which you want to get wet.
Yet you only have a single garage, so the TVR goes in there.

Now, whats next to the garage?
Kitchen?
Do you REALLY need a kitchen?
REALLY??
I have a microwave next to the computer. Thats as much of a kitchen as I actually need.
So the obvious solution is to knocka dirty great hole in the wall of the kitchen (I can supply trench compactor and jack hammer), shove a up and over, or better still, roller shutter door on. Park BAH in the kitchen.

Wouldn't it be great if you could employ a shrinking spell on your cars --- then they could take pride of place in your living room.
Perhaps Arthur Weasely could be consulted about this charming prospect.
David

Hahaha BAH in the kitchen?!

Problem is, my garage is kinda next to the kitchen, downstairs loo and staircase. Can't live without staircase. Staircase is needed.

Open sunroof and climb to floor above?
Vauxhall apologist.
Top

Again, it's so obvious its scarey!
Remove staircase, throw in skip. They take up far too much room anyway.
Have you never heard of ladders??
Does the same job, takes up less space, and if you need a ladder elsewhere, they're easily portable!

Keep the stairs (can be useful in reaching parts of the house). Keep the kitchen (useful for food and drink).

But - why do you need that BX-sized lounge? Simply knock the windows out, stick in a new garage door and - voila - a new home for BAH. Put your telly on the bonnet and you've got your own fully-leather-upolstered drive-in.
1985 BX 19 GT
2007 Alfa Romeo GT
Top

I cant even find my BX

Thought this might amuse. Thats my GTi under there after four days of continual snow in Val d'Isere this week. It took two of us a couple of hours to dig it out from the 3 to 4 feet of snow.

Its a bit like a natural garage and you certainly don't get any puddles in it to hasten the tin rot. 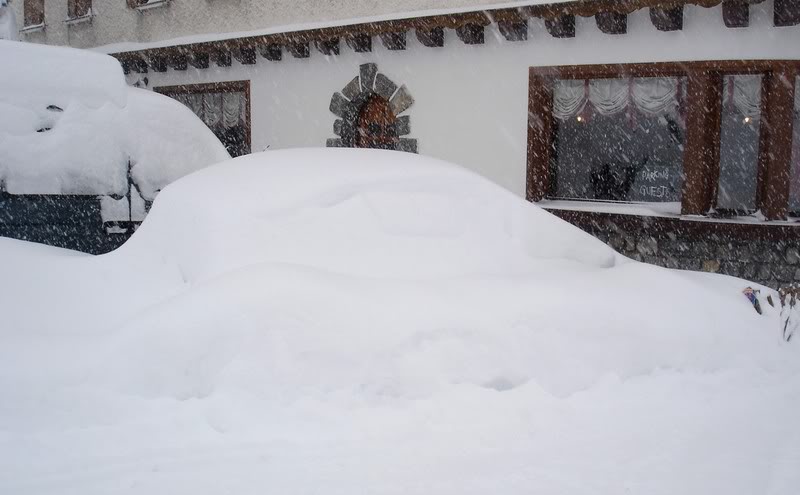 [/img]
The Joy of BX with just one Citroën BX to my name now. Will I sing Bye Bye to my GTI or will it be Till death us do part.
Top
Messages: 20