Tell us about BXs you have spotted on the road, or BXs/parts spotted for sale including eBay finds.
Messages: 60

Hey Tim, with Ken's trailer this should be all systems go without a hitch!

(well apart from hitching the trailer that is!

Hope the price negotiations go well 'cos there's no reason why they shouldn't if the scrap yard wants to operate a quick turnover.

I wont be bringing the whole car back sadly, just the bits I need, I cant afford and dont have time/space for another project, the 3 Citroens I have so far all need time and money spending on them, if someone wants the whole car then I will be happy to go without the parts and source them elsewhere, but if its in a scrapyard already chances are its past saving and if its been declared scrap then I dont think its a easy task to reregister it and I certainly wouldnt want one of those godawful Q plates!

I will of course keep you updated and take some pics, if anyones interested that is.
Last edited by tim leech on Wed Jan 23, 2008 9:55 pm, edited 1 time in total.
Top

Spoke to the salvage yard today. The car has been declared scrapped and they arent willing to sell it complete

, Im travelling down early saturday morning to get some parts

Artic do you fancy a roadtrip? if you need any bits for your 16TRS, I imagine it will have the same interior as yours being a B reg, the GT had the grey tweed trim when launched but changed for the black interior (similar to the Current CX Gti) in late 1985, they gained side repeaters and the electric sunroof but sadly the funky calculator/computer was replaced by a clock instead.
Top

Just re-checked the photos which are still stuck on my phone: the reg no. I gave is correct, so DVLA must have deleted the number now.
The interior is the grey tweed and a bit grubby but should clean up, and the early space-age dashboard was all complete when I was there.

Shame that the yard won't sell it intact, but if a load of you went down there to buy bits of it you could reassemble them outside...

Seriously though it's good to know that some of the car will live on.

Thanks Rob, Im aiming to be there about mid-day if your about give me a shout
Top

Artic do you fancy a roadtrip?

Who's car we going in?, i could take the C4 it holds quite a bit with the seats down.
Top

I have a Golf tdi Estate we can use, I wont need a big boot as I only need a few bits, if you want to come along do you fancy meeting me at mine for about 9am saturday? I will drive us down to the breakers and back?
Last edited by tim leech on Fri Jan 25, 2008 1:52 pm, edited 2 times in total.
Top

Don't forget to take your camera.

Mines shot, Andy do u have one?
Top

Yes, i will bring it & tools, i have a grinder but not sure if there is power near by?, i could do with the doors if they are any good
Top

No worries mate see you then.
Top

artic-steel wrote:Yes, i will bring it & tools, i have a grinder but not sure if there is power near by?, i could do with the doors if they are any good

Doors were good (very) when I photographed the car. At the time it was down the side of one of the buildings (the environmental prep), but you'd need a very long extension lead and I think the building concerned is on 110v. If you need a grinder, then I'd advise begging or borrowing a cordless one with a spare freshly charged battery.

If the car is still in the same place then as you leave the office continue straight down the access road for about 50m and follow around to the right. The road continues down past the cafe and starter/alternator shed and then you pass the large tyre/wheel bay (this is where the original wheels/tyres will be if they still have them) and environmental prep building with toilets opposite. In front of you is the area for older cars. If you turn left and then walk down to the perimeter fence and then left again (heading back up to the prep building) you'll find the burgundy BX GT. Hopefully it will be in much the same condition as when I saw it.

If anyone spots any 2cv's (other than the red Special at the rear left corner) or Dyanes/Ami's please let me know!

p.s. If you've never been there before it's easy to miss the entrance; as you leave the M23 head for the Pease Pottage Services. Drive past the entrance and continue on the same road, soon you'll see a chain link fence on the left with a large box hedge behind. At the end of the hedge is the entrance; it's not immediately obvious as the road bears slightly to the left and they only have a small sign.

The cafe at the yard is perfectly OK, but the services have a Burger King, cashpoint, cafe, newsagent/sweetshop, and also a mini M&S food store. The yard itself does take plastic and every time I've offered to show them inside my bags/toolboxes they've refused and inevitably I find that stuff has <ahem> fallen into them...Parts prices at the yard tend to be pretty fair and in the case of 2cv's very cheap. My tip is to offer them about 30-40% below what you'd reasonably expect to pay and point out any faults on the item concerned.
Top

Sounds like quite a caper. I hope you fellas have a good day and, as Ken said, make sure there's some photos for us armchair participants

What a day, Andy (artic) and I have been to Bridges, which is far and away the biggest breakers yard I have ever been too, alot different to the ones I visited as a lad there are now new "de-polluting" laws and everyone who enters has to wear a high-visability tabbard, theres a cafe, a "till" where you pay for your parts and you even get a receipt!

To say the car is tidy was in outstanding condition is a understatement, its in as good if not better than my own GT, having only covered 57000 miles to boot, had itw original dealder sticker/number plates and citroen book pack still with it. The tax only ran out last month and it was last serviced 2000 miles/12 months ago by a Cit specialist (sticker on engine). There is NO visual rust at all, the usual places are all perfect, the interior being a early (non sunroof) car is a brown tweed and although now dirty was intact apart from the computer and the indicator switch which had already been removed.

I have NO idead why its been scrapped, unless something major went bang, the cambelt is in tact and looks relatively new.

Unfortunatly the car is now beyond help as it has been "de-polluted" which means the tank, sump, and both struts have been punctured and the fluid drained, to add insult to injury theres a battered old fiesta sat on its roof

, all wheels and tyres are also removed from each car so its sat on the deck which wont have done much good.

Someone else has also had some bits off it, the front spheres, cooling fan, and the interior parts so theres another BX'er who knows of it, on a more positive note it provided me with all the bits (and quite a few more) I needed for the paltry some of £10 each (as he said we must be dedicated to have driven 150 miles

So if anyone needs any practically perfect Mk1 bodypanels, interior (Charlie!) and engine parts get down there quick before it gets recycled.

) with a silver GTi tailgate in a seperate compound and theres plenty of Xantias and ZX's. 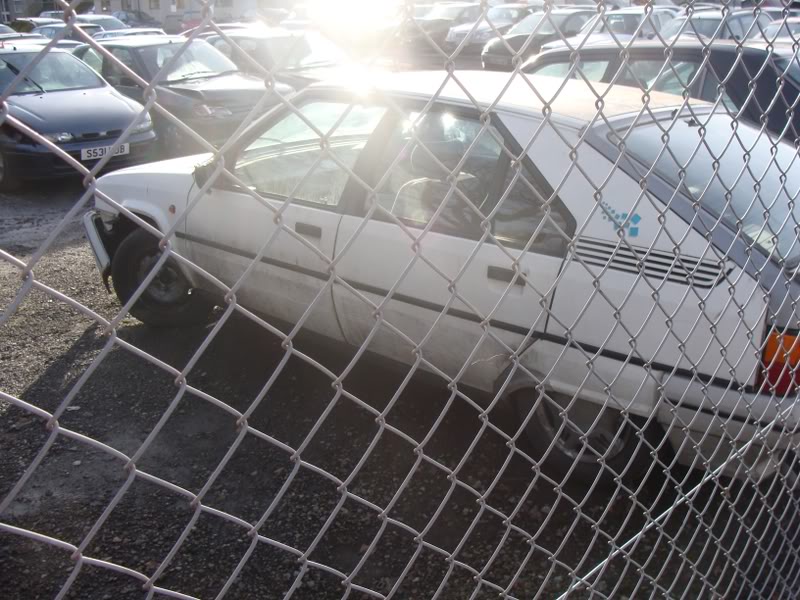