A place for us to show off our cars in all their glory. Please keep picture sizes to about 800x600 pixels.
Messages: 23

gearing's same as on my gti. weird. guess I must just be heavier footed in the gti.
towing a trailer a fair distance tomorrow with a moderate weight so will be interesting to see how it like that

back from an insanely fun weekend

also just went for a cruise around 'red rocks' on the southern coast of wellington, NZ. about 6km down the road from my place. pretty rugged and usually only attempted by 4x4s, and eccentrics in bx citroens. lol.

pic at Waitomo (home of the famous caves) in Waikato, New Zealand.

Need to check correct setup of heights, and potentially replace high pressure pump as it's become rather growly and is painfully slow to pump up
plus doseur is in need of repair

I guess for a car that lay idle for over a year and has done 280'000km it's not too bad, especially given the state of our roads.
Will source a secondhand pump in the coming weeks from the 'pick-a-part' junkyard that only charged my $26 for some recently serviced rear spheres and low km rear suspension units
Top

bit sad really. swapped for an rg250 and a random 80s moped, and a trailer load of spares.
guy I swapped it to is a mate of a mate, and he took me with him on sunday for my opinion on an 'old citroen like yours'.
turned out to be a relatively rust free (read:only rust = a small piece in one side of the floorpan) and never-restored or repaired, 1960 ID19!
He scored it for $200, which was literally heart breaking for me as I know how rough with vehicles he is

he already has 20 cars, all whom never get worked on so I hope to be able to score this for little more thanhe paid for it, in a few weeks when he tires of the idea. He seems content with the bx.

I don't think I can live without a hydro citroen for too long!
Top

I'm back after a wee while.
Obtained the aforementioned ID19, had her since June.
Got it for a VERY princely sum (so far she owes me $500) with a brand new WOF, and being 48 years old, qualifies for ultra cheap registration. All legal.

Drove her straight home to wellington after meeting the guy who had owned it for most of the last 30 or so years. He stopped on the side of the road in his XM as me and a friend had stopped to turn around.
Completed a couple of thousand miles in her in the week following as I had a few short notice trips to complete that i couldn't go via my parents to pick up my more 'reliable/sensible' '72 crown.

couple of weeks ago picked up a 1970 d super to use as parts (mainly LHm system as an upgrade for the ID) for $150 off our local 'ebay' type website. towed her back from Taupo airport to Feilding( about 250km or so) Behind dad's Nissan Navara. Had quite a bit of interest.

will post back as i continue to work on her if anyone's interested. Not going for a full restore at the moment. She's now rust free and undercover, and I love the tattiness of it so as long as it's not deteriorating then I'll keep the body as it is

That's a good looking TRi and the price is something that you can't complain about! Wish people on this side of The Pond would be so reasonable including wreckers! Those rear suspension arms did sound cheap! Citroens in Sydney at least are more an opportunity to be fleeced by so called specialists, so the number of BXs here is dwindling fast as the repair costs outstrip value by mile...I mean, kilometres.

Yes, the colour is interesting and those mag. wheels are the same as on the TRIs sold in Australia and I think the first of the TZIs here had the same mags?? I have a TZi wagon which had the same wheels originally but a previous owner changed to the Speedlines at some point. We also have a TRi hatch with Speedlines but don't know the history of that one.

That Crown is a great car, I used to have the slightly revised model dating from 74, as I remember?? Very good car which I sold for what I paid for it some years on.

Good to see more Kiwis on the BX Forum!

Pulled the ID out of the shed after a couple of month spell lying dormant this long weekend just gone.
saw the local vintage car club having a display in the centre of town...Easily the coolest thing there was a Citroen traction. Very nice. Got a hearty wave from the owner as I passed him on the road the next day

Took her for a 700km Jaunt yesterday too.
Got around 8.5km/l. Not too bad considering I thundered along at around 70mph the whole day in very windy conditions

. I'm constantly amazed at how much it loves cruising at such high (for a 48year old car) speeds, and how little fuel it uses, all the while running a little bit rich. I'm looking forward to the improvements I can make to increase it's economy!
Top radiator mount broke somewhere around a very dodgey, run down town called Patea so a cable tie has been despatched to sort that until I can get to dad's workshop to weld her back up.
Had a few waves from other older cars, and drivers of newer Citroen C4s, Xantias and a bx or two

Got her down in wellington again for the week on daily driving duties.
The only quibble I have with the car is the lack of Audio system. The longstroke motor is great to listen

to but it still gets a little boring when you're driving by yourself, so after i dropped the girlfriend back to her place in New Plymouth it was a little tedious when stuck behind some slow moving campervans......
Not wanting to add a permanent system I may mimic what I've seen on a Volkswagen website previously. Over in the states people often use old suitcases to mount a speaker or two and a cd headunit, and a smallish 12v sealed battery.
I'm thinking a large-ish suitcase with a small (circa 100w) amplifier, cooled by a couple of small pc fans, and some reasonable speakers, hooked up to a power socket mounted in the car will be a good idea. doing away with the headunit in favour of an amplifier with relevant cord to plug an MP3 player or similar would be alot easier, and look alot more like luggage than a makeshift stereo

looking around on the net there's a few different ideas though. I bought very cheaply form a junk shop a few months ago, a small suitcase record player that the lady didn't think actually worked. pluged it in and it goes great! so now I don't want to pull it to bits to do with it what I originally intended....

It's so small anyway that I'd only be able to have one speaker which isn't ideal... hmm

anywho a couple of pics of different systems. some pretty haggardly built but others are really nice. I want a case that's very 'retro' looking. thinking of plastic hard sided late-60s to early 70s type thing to start with. project for weeknights I think... 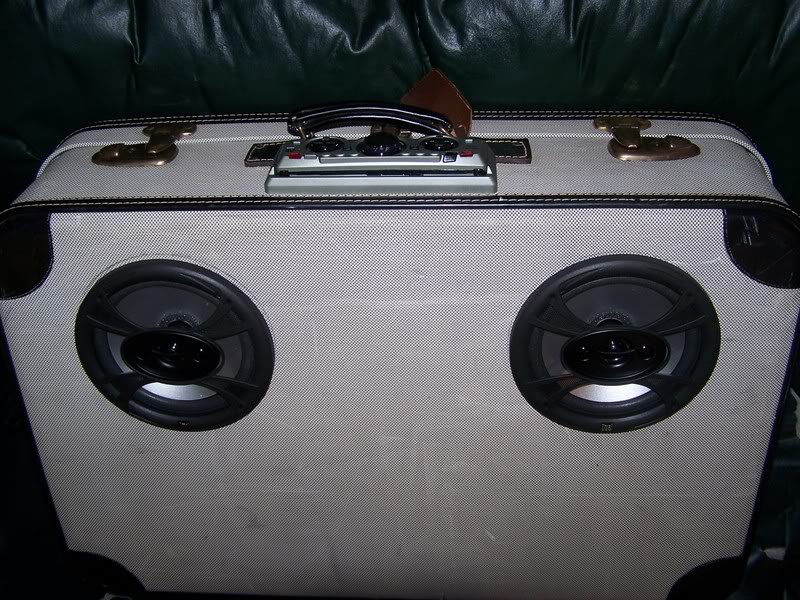 top one's pretty rough looking but the red one is exactly what I want
wonder how it sounds
Top
Messages: 23