Anything about BXs
Messages: 48

Philip chidlow wrote: Yes I noticed that about the bonnet.

But what to do? Where will I find a Dolmen Grey bonnet?

I'll put 99 octane in it when I get the chance.

If you were REALLY careful, emoved the bonnet and clamped the leading edge you could chop it down. I've done it before, but it took ages as I didn't want to wreck the bonnet..

As for the fuel, it doesn't really matter what you use in it, being as it has the knock sensor the ECU will adjust the timing to suit whatever you pour in. Although if you want the full beans then 99RON is the only way to go. If you're giving it beans alot you'll want to use 99RON anyway, otherwise the valves and seats will get rather angry!
Smokes lots, because enough's enough already!

Ah that must be one of the first ones with a knock sensor then. I've heard they're not quite as sharp as the 2 row ones.
I've been running mine on normal unleaded recently, as the prices are just stupid. I've got no choice but to get used to them, so I'm gonna fill up with 99RON at the begining of the month and then top up weekly with normal and repeat it. Hopefully it'll help my valve seats without crippling my wallet even more than it already is

I have the option of 2 row or three row.
Despite the money saving abaility of the three row, I still use the two row, and have no intention of swopping to the three row.
I'm not sure what the difference is in the mapping TBH, but there is a notable difference between the 2.
Since 99RON is only 1p a litre more than diesel round here I dont let it bother me that much, even less so since the last time I actually drove the valver 99RON was 98.9 round here.

Valve seat recession isn't really a problem on 95RON unless you're racing it alot, which lets face it, we all do since thats what it's for, other wise we may as well have a diesel.
95RON does cause pinking on two row cars, and loses some performance, but if you're not going beyond 4500RPM that often I'm not sure I'd worry.

With some of sh!t they're throwing in petrol to get 99octane it makes me wonder which is the lesser of two evils TBH..
Bring back leaded 4 star say I.
Smokes lots, because enough's enough already!

Looking good Phil! Nice colour and condition. Where did you photograph it? I notice there's a Bentley parked in the background.
On the subject of leaded petrol - I have a lead additive that I put in the tank of my C-50 when I fill it up its huge three litre tank ( not quite a sports vehicle I know!) - leaded is not available here as far as I know.
Todd

I know it's still available, there's a filling station not far from here that sells it, but £1.50 a litre seems cheap!
Over here it's £1.72 a litre, and however much I love the valver, and the ambulance, I'd be bankrupt inside a month if I used it!

I have dabbled with addatives, and whilst some are ok, on the whole the methods they employ to get the desired results are not wholly beneficial to the longterm health of my engines...
Smokes lots, because enough's enough already!

toddao wrote:Where did you photograph it? I notice there's a Bentley parked in the background.

A footballer's wife's paradise, locally, called Beaulieu Park. Martina McCutcheon lives (or used to live) in the house I parked outside - and yes there was a Bentley cabriolet, a new Range Rover and a brand new C6 (Yes! C6 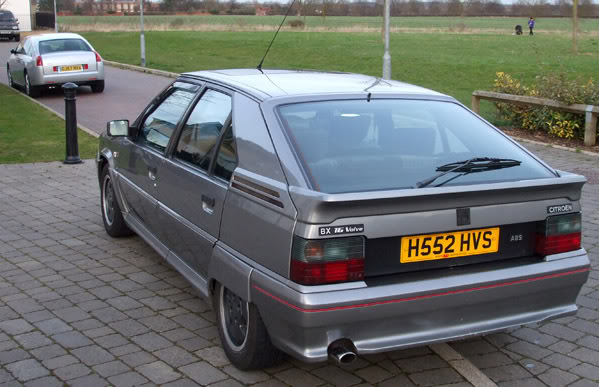 Lovely car Phil, glad the badges camein handy, I have seen that car before!
Top

Martine McCutchin, I'd do her some damage so I would!
Smokes lots, because enough's enough already!

A good diet wouldn't do her any harm first though Doc

And I reckon Miss (?) M.Mc would be just the sort of bird who would love the throb of a 16v! Would set her body quivering ( pre-diet!) Get yourself down there Doc!
Had a look at Beaulieau Park on the internet - it's pricey!! Phil's 16v must be the most trophy motor to have graced its streets. Ok, I am a little BX biased!

I pulled up near there in the 16v and a new C5 top spec model (don't know what but it had leather and alloys) was beside me. The owner - looking like a 1970's East End villain - gave the valver a long hard look. He smiled and walked off. I don't know if he was impressed.... but I think he was definitely curious...

Looking at the plate its along way from home being registered in Bonni Scotland!
Top

Well, after a few days here's the list of projects:

Get rid of the horrid non-standard spheres set up as it doesn't suit my kind of driving. New 16v set going on tomorrow. New Xantia Acc. sphere might stay as I don't think that'll necessarily make a difference to the way the car drives. As I said before my previous 16v rode much better, this one is low and hard and the rear-end is way too hard for day to day as opposed to track... relatively small potholes unsettle the car on corners, the nose judders up and down over concrete roads and it has a tendency to tramline. As Doc says if it is made by man it can be fixed by man!

I wonder (can anyone offer any suggestions?) if the height correctors have been played with to lower the car slightly (?). Getting it checked and everything 'reset' as much as possible to 'standard' 16v.

A change of tyres will help: Michelin Energy E3 AT or more likely Pirelli P6000's all round.

It had a replacement strut return pipe for the MOT. I think one (o/s) is weeping a bit so I assume that's the other. New one on tomorrow. Or find out what and where the leak might be. Oh for a BX that doesn't leave a calling card on the road.

Rear arm bearings suspect (as do get rear wheel contact with arces on tight turns) BUT this might be because the car is riding lower with XM spheres on the rear. If they need doing they will be done.

One of the belts is squeaky on start up. Will check that out.

There is a leak into the driver's footwell from the heater matrix I guess as it's coolant... Not toooo bad but quite moist - so I'll have to come to terms with getting a replacement fitted... hohum...luckily there're all the bits in the boot!

Somewhere there's an exhaust blow - a look on the ramp tomorrow...

It had a new clutch recently but even so it does seem that the pedal needs to be pushed deep into the carpet to disengage - particularly reverse. Can it be adjusted?

All in all it's going to probably cost me again what I paid for it over the coming months... But should be worth it (to me anyway) in the end.

Rid Height can indeed be reset, my own 16v when I got it had been set low and had some "active"? Spheres on it, the ride was shite but it handled well, needless to say its all back to standard thankfully.
Top
Messages: 48