A place for us to show off our cars in all their glory. Please keep picture sizes to about 800x600 pixels.
Messages: 118

I also have the "f" symbol on my numberplates but i used the legal uk 3 d font. Had the plod behind me loads of times but never been tuged. If i get told i have to change them by the plod i will otherwise they will stay as they are

Aerodynamica wrote:There was a different and I believe, legal font used on UK cars in the early 80s - a similar sort of mildly squared off font that looked quite special on a proper 80s barge.

Anyone recall what it was called? AFAIK you can still get it from specialists today. 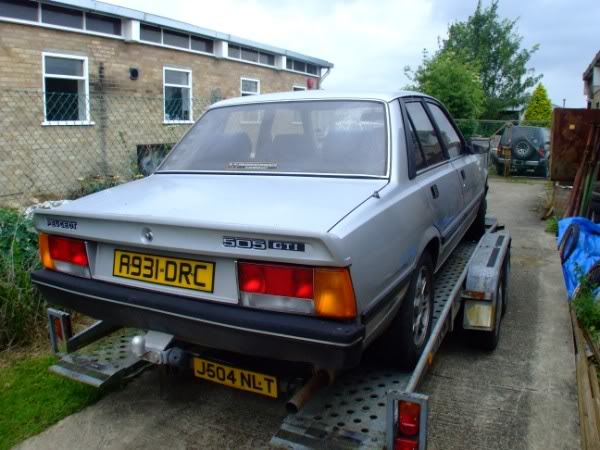 Maybe not to everyone's taste tho.

Sorry M didn't see your post until after mine. Min 20? koknobs

At a risk of thread hijacking (Sorry Tim) if you ask on the AS forum (Autoshite) there probably would be 20 people willing to pay £20 for a pair of plates - they dont have to be 20 of the same, but their minimum run is 20 pair. They also do the same font but in Silver / Black too.

rob-bx16v wrote:I also have the "f" symbol on my numberplates but i used the legal uk 3 d font. Had the plod behind me loads of times but never been tuged. If i get told i have to change them by the plod i will otherwise they will stay as they are

I suspect the Fuzz would have to be reasonably bored to pull you over for that number plate, although just because you don't get pulled over doesn't mean it's legal.
this might be a signature
Top

I also think that if the font was for example a strong italic style that was barely legible then the police might have something to say or the letters and numbers were arranged to spell your name and spaced incorrectly I think might also interest them. But the font is very clearly readable and although technically might be an infringement I don't think any copper could really give a monkeys unless he's really out to get some serious brownie points.

I don't think any copper could really give a monkeys unless he's really out to get some serious brownie points. Very Happy
_________________

I was pulled last year for yellow headlights - copper didn't know her game..


if you ask on the AS forum (Autoshite) t

thanx mate, I've been on AS for years under the random username j-j. It was AS that I asked for the font name and naturally someone knew immediately!!

Much as we love 'em the BX is pure shite (for anyone unfamiliar this is a compliment!)
Graeme M

How is it my loss if I don't like the fact that you're displaying unlawful number plates?

Earlier in the thread, you wrote:Jeez, Will you lot chill out!

Which I think is advice you may need to take yourself. You have to remember that when you do anything to a car in terms of a modification, some people will like it, others won't. You've posted the car up here for critique, and I've simply pointed out that your choice of number plate isn't road legal.

... and at no point has anyone made a comment about you.
this might be a signature
Top

Maybe David, BUT I am more than happy to congratulate someones hard work and generosity, but would not see the need criticise if it doesnt appeal to me as nothing is gained by upsetting the apple cart.

Roverman wrote:Everyones opinions are there own but maybe to express them a little more diplomatically would be a better bet?

When it comes to aesthetics, then that's a perfectly valid point, which is why you'll notice I often don't comment on what modifications people have done. In general I couldn't care less what people have done to their car, as it's their car and they can do with it as they please.

The only reason I commented in this case was to make sure you were aware (as many people are not) that the plates you had fitted aren't legal. TBH I think I was reasonably diplomatic in the first instance, as I did say "I presume the plate is for show only" rather than saying something like "YOU CAN'T USE THAT PLATE!!! IT'S ILLEGAL!!!!!!eleventyone!!!"

I only then pressed the point as your reply seemed to completely ignore the legality of them, focusing entirely on their aesthetics. If they were a legal alternative (such as the "Serck" font mentioned above) then fair enough to concentrate on how they look, but if something isn't legal, then it's of no consequence how it looks at all... the fact is that it's not legal!

I'm also not specifically highlighting YOUR number plate. Had I noticed the one on Matt H's car first, I would have made mention in that thread rather than this one.

Am I making a massive fuss about this? Yes, I probably am, but given that the government and general public seem to be anti-older-cars and seemingly looking for any excuse to demonise the "older" car driver, and force us all to buy brand-new cars, I think we have a bit of a duty as a public forum to make sure our old cars are as legal as possible. This means taking a responsible attitude to every single aspect of our cars (like having legal tyres, legal working lights and legal number plates......) Otherwise we'll all get tarred with the same brush "those tatty old dangerous illegal cars" and the government will do what has happened in other countries, and we won't be able to work on our own cars, or they will be forceably scrapped at 10 years old.

Probably sounds a bit over-dramatic, but given that it's happened elsewhere in the world you can imagine it happening here.

Edit: Rob... any chance you could shrink that image down from the huuuge size it is? It's making this page very hard to read.
this might be a signature
Top

DavidRutherford wrote: Edit: Rob... any chance you could shrink that image down from the huuuge size it is? It's making this page very hard to read.

Right can we get back on track please?

Number plates - not to everyone's taste

There - done. If anyone wants me I shall be on the park round the back with the kids
Top

sorry david i dont know how to shrink images (need to learn ) but someone seems to have done it for me so thankyou to whoever it was.

Maybe, but they are unlawful for road use so whether people like them or not is IRRELEVANT! You can't use them on the road, and that's that. Even if you think they look good.

Yes, they can be used off road for show use, but what's the point in having a plate made up with the correct registration if you can only use it off-road? It might as well say "BX GT" on it if it's not going to be used on the road.

It would be no different if you said "I'd much prefer the look of my car if it had green brake lamps". Fine, you may like that, but it's not road legal.
this might be a signature
Top
Messages: 118