Had the BX up to a fair old lick early this morning,

Not too far off it's theoretical maximum.... Noticed the wind noise from the sunroof wind deflector though! (Wonder what effect that has on economy?

I have always been under the impression that there was NO 1.9 turbo diesel BX produced. OK maybe a test-bed, but essentially not.

Then I saw this: 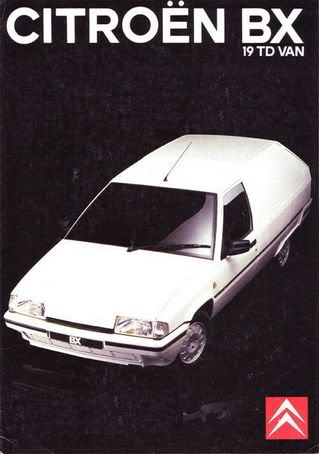 I have that brochure and its defo a 1.9D n/a, with the T standing for something else like on a BX 14TE/16TGS etc or maybe like a Merc 300TD estate, where the T stands for transport?
Lots of Motors, mostly semi broken....
Top

Ahh, I see. I which case Tim you'll need to correct my Heuliez article caption.

I don't know why (it's not really precipitated by anything that's happened on here recently) but I feel the need to get something niggling off my chest: It's my blog so this might be the best place.

Over the last few years on here, I regularly got stick for posting points for discussion and suggestions that would ultimately lead nowhere and (to some) seem pointless. I like to think aloud, I say. I enjoy discussing the practicalities of, for instance, creating a BX track day car, or making a BX WRC homage, but because I don't actually do it doesn't mean it's without merit in discussing. Anyone who knows me will know I do go off into a fantasy world sometimes. It's what I do for a living!

I was criticised and mocked for buying cars, saying this or that was the dog's and then selling it again a few months later. Well, on the face of it maybe that's justified. Case in point might be the 23k mile 16TGS auto I bought. It was to all intents and purposes like buying a new BX. But it didn't harmonise with my driving style. It was, dare I say, a little boring? So was I wrong to sell it on (it was offered to the BXC first)? OK I made some quids... but there you go.

As far as the 16v 'HVS' I had for a few months goes, I couldn't avoid selling it. In hindsight, I was over-enthusiastic about spending money on it early on and then moaned about losing so much when I sold it! I made a mistake. I feel bad about the rants I posted, some of which were too personal. I bear no ill-will to anyone involved - it's just the way the cookie crumbles sometimes.

I have in the past, mooted some plans that ultimately came to nought (but who doesn't do that?). Some ask(ed) what's the point in spending anything on a BX or finding 'my ideal BX' when all I do is sell it on. Well as far as the recent St. Tropez activity went (I kept it a week), it was an experiment - an opportunity to take - but pretty quickly I decided it wasn't for me... But I always meant well. As for accusations that I'd accept 'free stuff' for a BX that was then sold on very soon - therefore in some way insulting the gesture, I can only think of one instance - I was given some 16v badges. In fact, I send stuff out now and then for free, but it's generally free because I don't need it or it didn't cost me much in the first place lol!

But I sat down yesterday to start work and caught sight of the BXagon map I still have on my wall and realised there was something we did together which was worthwhile. We did raise over £5,000 for Cancer Research UK and we had a great time and the event did a lot to raise awareness of the BX within the CCC. (Thanks again to everyone who took part and thanks to those who supported the effort).

As a spin off, I am resigned to being (hardly reluctantly!) a BX owner for as long as it is practical. The GTi I have has been in my possession for 17 months now and as sure as I can be, will be with me for a lot longer.

Which brings me to end of this cringe-worthy self-justification. But I feel better for it. So onwards and upwards.

No-one should have to justify themselves here Phil, certainly not for owning a BX anyhow!

Has anything specific happened you want looked into?
PM me or Mat if there is.
Smokes lots, because enough's enough already!

No nothing recently and certainly nothing that specific - but I have had some feeling for a while that maybe I have been misunderstood in the past!

No, I think the main reason for my blog entry was cathartic. Everything's cool.

cool,
shouldn't worry, I'm misunderstood all the time, some people are silly enough to think I actually know what I'm talking about! PHAIL!
Smokes lots, because enough's enough already!

Lets have a sweepstake of how long you keep that one

Don't be so harsh. I do change cars quite often being fickle and spontaneous - but if I want to buy it and keep it - or not - that isn't necessarily a bad thing.

Phils defected to the XM boys!

Hardly defected. I haven't even got the car yet!

They're taking the piss.

Four months?!! Any one of us would've lost our licence for a year or more - AND had to pay a bigger fine - AND even be jailed.

I don't think the punishment is too lenient. I would accept it (if it was me) as pretty fair. What I object to is that this penalty (pardon the pun) is not applied evenly.
• 1992 Citroen BX TZD Turbo Hurricane
• 2006 Xsara Picasso 1.6 16v
Top

'Being chased by paperatsi' as a defence! what did he think they were going to do if they caught him fire live rounds from their cameras?? Rather than admit to boy racing he thinks inventing a tale that puts his and other peoples lives in danger to avoid a picture justifies speeding and what grounds does he think he has for an appeal especialy when he didn't even bother to turn up in court for the hearing.

He was only doing 104, thats still 2nd gear in a lambo