I thought I would try and write a bit about my current project on my BX (TZD Turbo estate), which is replacing the 1769cc engine with the 1905cc TD from a Xantia, kindly donated from my Dad. BTW I caught the Citroen bug from him about 20 years ago - he has now moved on to a C5 which seems to have cured him as after a year of ownership he is after a Passat!
Anyway, I digress. My BX has been laid up for about 9 months as the cambely was due for replacement, and I didn't really see the point in changing the belt as I would be replacing the engine next weekend. Or the next. Or the next... Fast forward to now and I have a little more time so out with the old (going to find a new home down south with Kermit) and off with various bits to fit on the Xantia engine, such as sump (want to keep the air con!), oil cooler sandwich plate (smaller on the BX) and the timing cover (I prefer the one on the BX as it uses clips rather than bolts).
Earlier this week I was having a spot of bother with the crankshaft pully bolt - I couldn't budge it using 4' of leverage so I had the bright idea of using a spot of mechanical assistance. I.e. breaker bar on bolt head, tow rope to breaker bar, other end of rope to tow hitch on a V8 Discovery. Some of you may be ahead of me here (no, the Discovery didn't break down!), but it did succeed in pulling the Xantia off the tree stumps that I was using as axle stands, and dented the side of the BX

After I had jacked everything up again I tried to use a trolly jack under the breaker bar until the weight of the car was being supported by it, and then tap on the socket head with a hammer. When this didn't work I decided to call it a day as it was midnight and had started raining.
Next day in daylight, with a huuuge scaffold pole, I got the F"%$ing thing undone

I am swapping the cam with a N/A diesel cam (kindly supplied by David Rutherford) as the profile should give me a little more torque off boost, hence I have to re-shim the valves. I am slowly learning that it may not be a good idea to work on the BX in the dark when I come back from work. as I have mis-measured one of the valve clearances - now 0.06mm tight. Bugger.
Anyway, the Xantia engine is out, ready to be cleaned up and lots of new parts fitted to it. If anyone is still reading this far then I will try and post up some pictures, also any hints I can think of...number one being don't try and undo a crankshaft bolt with a 4x4!!!
Top

I love reading these blogs and that is a fine use for a Xantia engine, transplanting it into a BX

I'll be following it with interest.

I'm keen to know how the NA cam performs in a turbo engine.

Your adventures with getting the crank bolt undone

There is a simpler way but it's a bit late now I guess. The simpler way is to use the starter motor with a good "T" bar jammed up against the wishbone. As long as you ensure the engine cannot start, a quick whizz of the starter releases the bolt a treat. Never failed me yet, even when faced with a bolt that had been tightened by King Kong previously although that one took three spins of the starter...

Keep up the good work Mat, looking forward to the next instalment!
Jim

citrojim wrote:that is a fine use for a Xantia engine, transplanting it into a BX

Not too much progress today, got the new engine a bit cleaner, fitted an almost new tensioner, new clutch, got the old water pump out too. Also changed the oil level sensor and the rev counter pickup, as the Xantia one had failed and mine is fairly new. The garage that serviced my Dad's car obviously liked silicone sealant - I'm sure the water pump was sitting at an angle to the block, there was so much underneath it

but the gasket face looks in perfect condition

Then rain and hail stopped play; but I did manage some pictures in the 10 minutes of sunshine that we had... 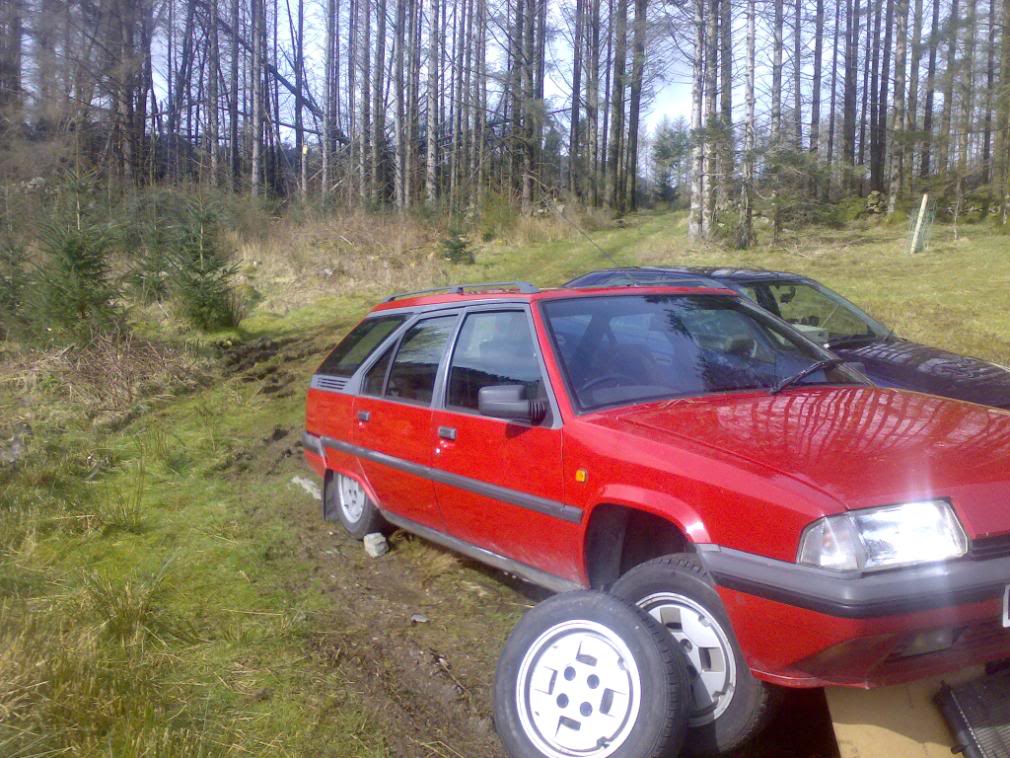 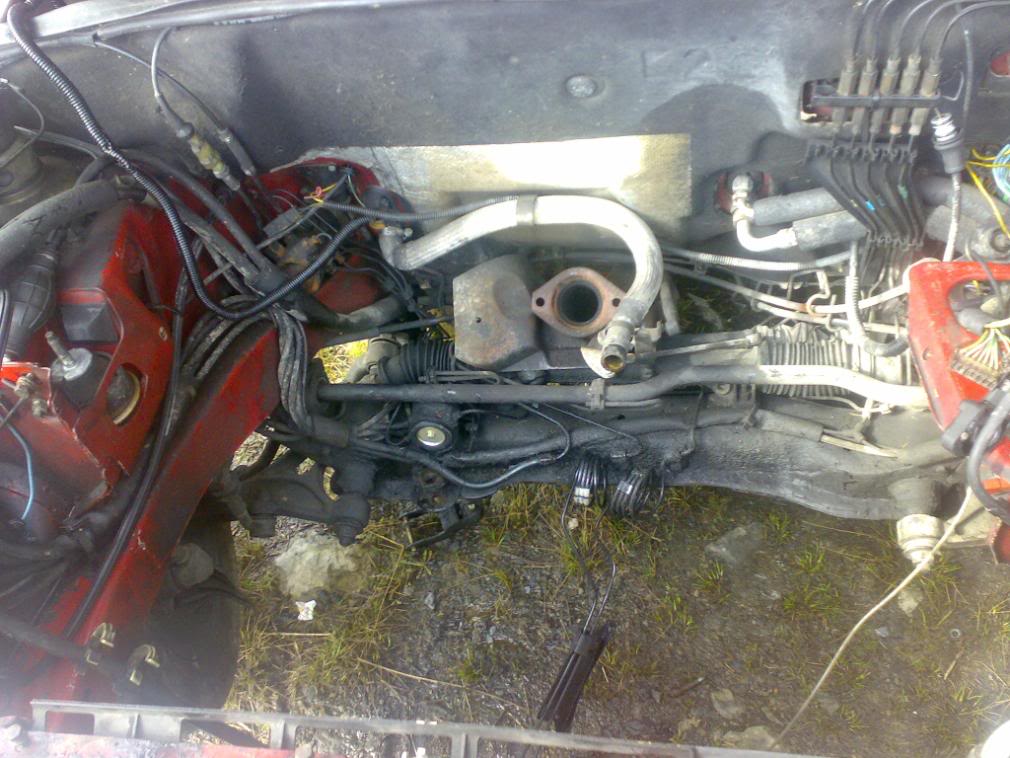 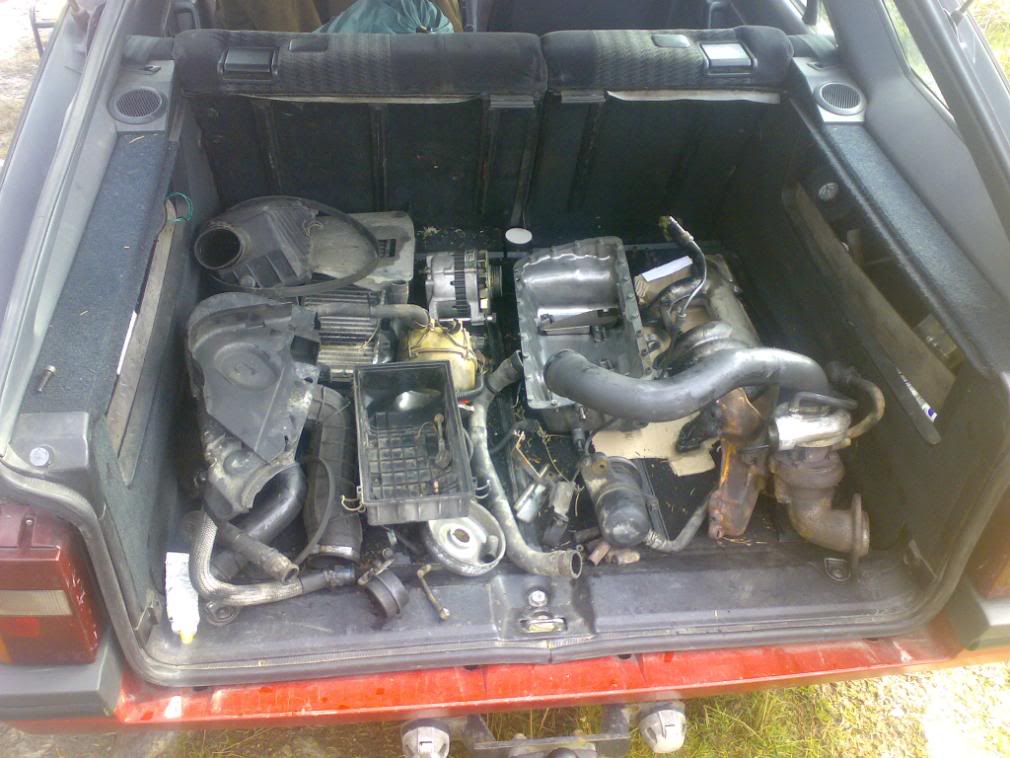 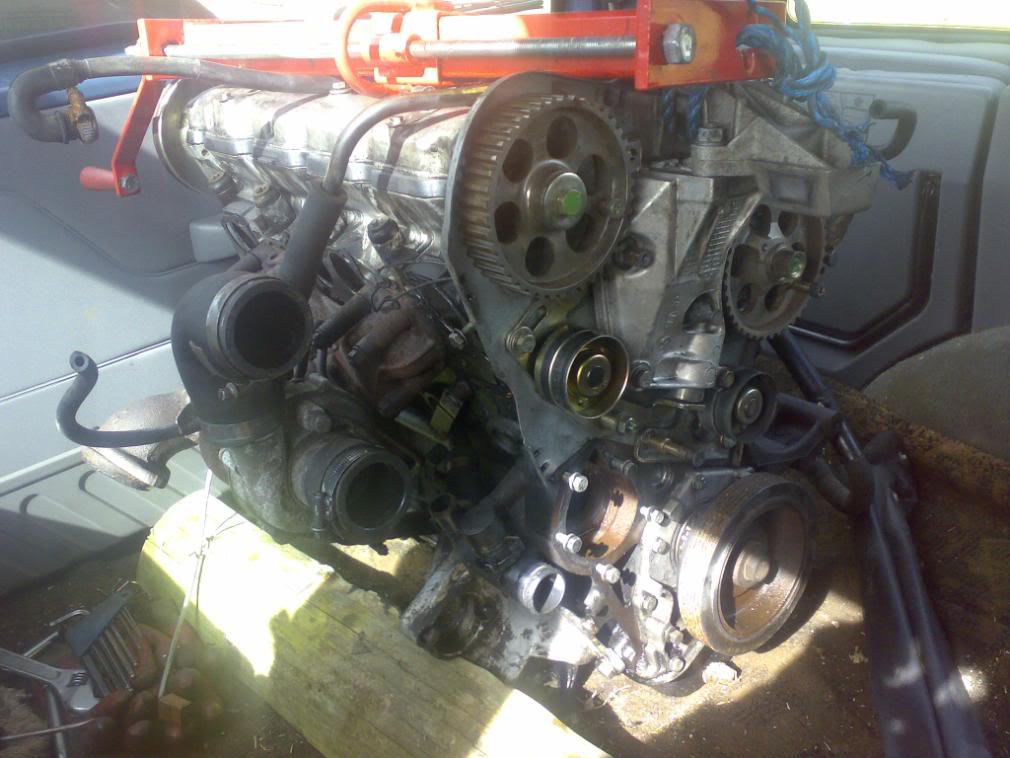 Ready to fit to the new lump... 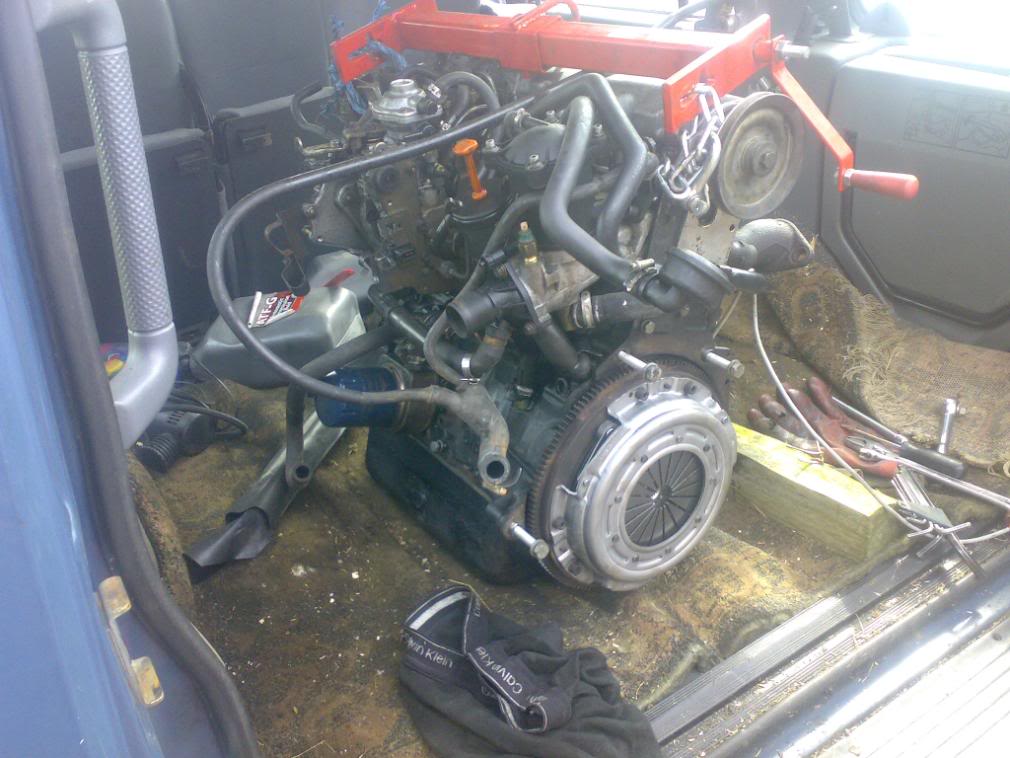 Before I get any comments about being well off given my choice of rags I had better point out that they are a worn out pair (but they do make nice absorbant cloths!)
Top

Badly phrased Mat, what I meant to say was it's a good use of a part of an otherwise dead Xantia that is beyond saving... I'm all for a terminally ill Xantia donating it's vital organs so that a BX can reap the benefit

In truth, despite my Xantia habit, I'm really rather fond of the BX... As you know, I just object strongly to perfectly good Activas and Valvers donating their engines to 205s and the like

Tell me, did all that silicone sealant hold the coolant in? I ask because I have a brand-new water pump to fit to my 2.1TD when the cambelt gets done and it came without a gasket. I'm told silicone works but I have my inner doubts

Hope you haven't got anything against 16v 205s? As this is parked outside! I couldn't agree more though, I find at a crying shame when ANY usable vehicle is scrapped in order simply to buy a slightly newer model. Such a waste.

Don't worry, no Citroens were harmed during the making - only a very banana shaped 405 Mi16x4. I did for a minute conside taking off the 4x4 running gear and trying to make a TD 4x4 using the stronger 405 transfer box, but fortunately (and uncharacteristically) common sense took over (and the rear subframe was fairly bent too).

Yes, the silicone sealant prevented any leaks - although they used a gasket as well. I could understand it if the gasket surface was damaged, but from an engineering point of view I don't like using the stuff as it seems like a bit of a bodge, plus you have the potential for all the squeezed out sealant falling off and lodging somewhere else. Not so much of a problem in the coolant but in the oil system could be fatal for the engine

If the gasket is the same as for the lower capacity diesels (I understand the block is broadly the same?) then I think I have a spare water pump gasket which I can bung in the post for you...
Interesting tip using the starter to undo the crank bolt, thanks - I had read about it but always worried about damaging the starter (how I wish it was just the starter I damaged

). Might give it a try next time I get stuck.
Top

citrojim wrote: Tell me, did all that silicone sealant hold the coolant in? I ask because I have a brand-new water pump to fit to my 2.1TD when the cambelt gets done and it came without a gasket. I'm told silicone works but I have my inner doubts

hhmm, well, silicone does kinda work in so much as it tends to stop large quantities of collant disappearing. But for the long term, computer says NO.
Gaskets are available as a seperate item and are cheap. Always use a gasket and a smear of Hermitite.
After all, a gasket is much cheaper than another engine.


Mat, do you have the colour name for your 205??
It looks exactley the same as this: 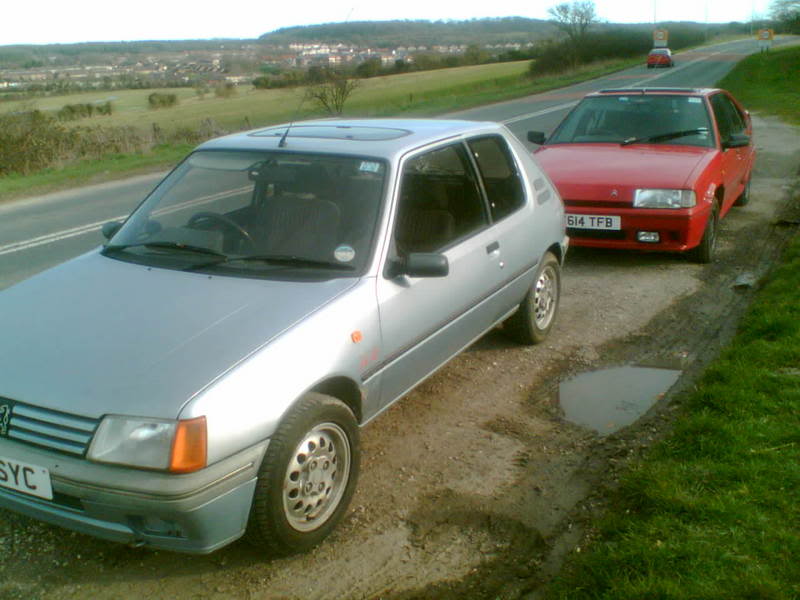 Which is a bluey silver. Or is it just a trick of the light with your car??
Smokes lots, because enough's enough already!

I think it's more a trick of the dark...as ours is a straight silver colour. Here's a photo on the day it didn't rain in Wales last year.

Funnily enough not a bad match for hammerite silver!
Top

That's lovely. And with a 16v engine a great wolf-in-sheepish wolf-clothing!

If you get what I mean

Thanks Phil, it's actually for sale at the moment to pay for house renovations - but all the people who have come to see it have been blatant time wasters.

Today I shall mostly be deciding which turbo to use (Garrett or KKK). I have asked the advice of others on another thread:
http://www.bxclub.co.uk/forum/viewtopic.php?t=8412

Hopefully will also get a chance to go mountain biking this afternoon as well.
Top

That's tantalising, Mat - for sale? Where - and for how much?

I hope everyone is enjoying(!) being back at work. I have taken the week off to catch up with a few jobs that need doing, and it also means I should be able to complete the swap without having to rush it in a weekend.
Yesterday I mainly boxed in some pipes in the bathroom, but I did manage to put on a new water pump... 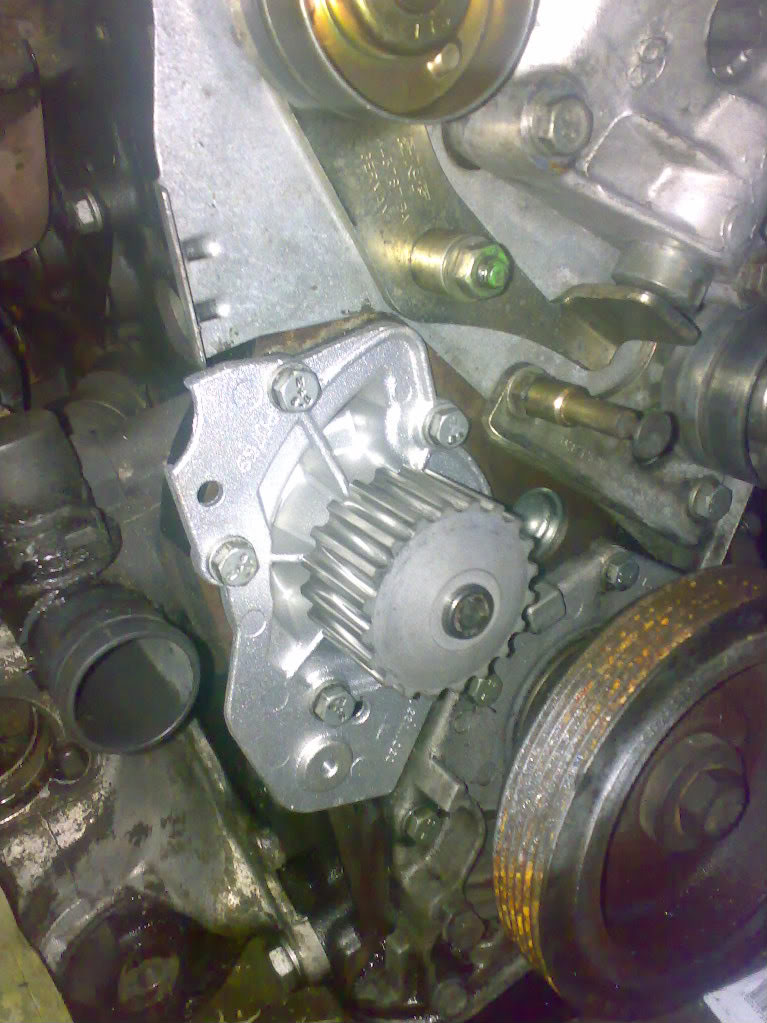 ...and fasten one of the intercooler brackets down properly. 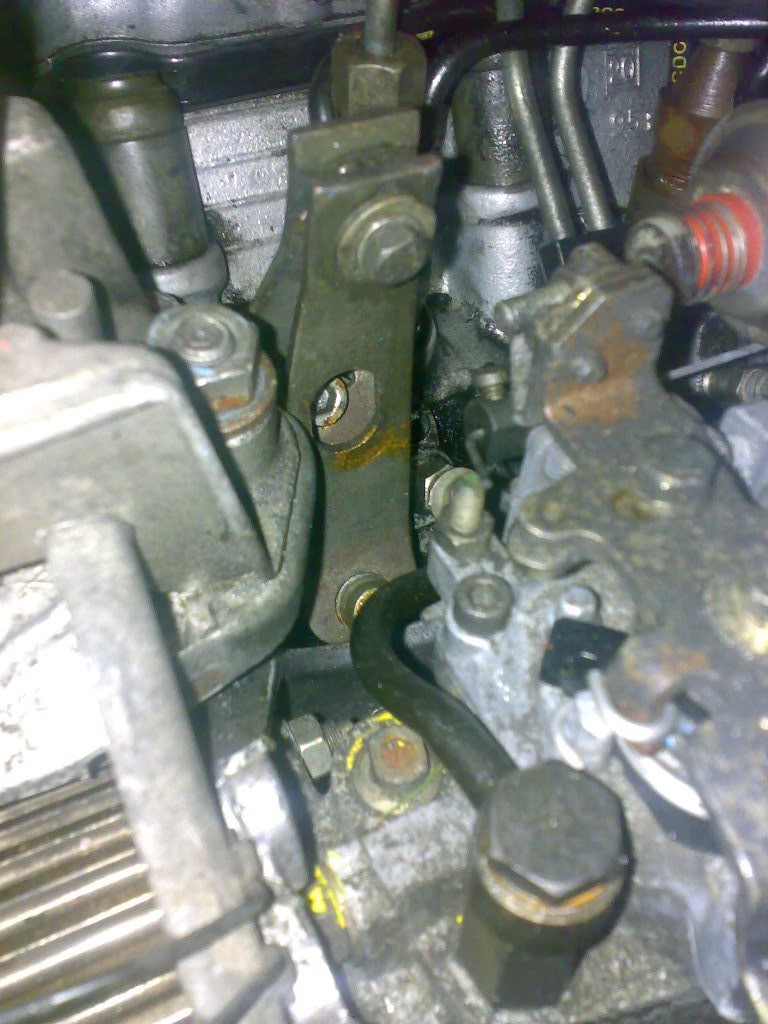 It sits on a blanking off plate on the head, so I changed the gasket on it at the same time. The bottom bolt is a bit of a pain to get to, thank goodness for ball-ended allen keys!
Today I have pinched some valve shims from a mate's scrap engine, set the clearances correctly this time(!) and put new cam seals in. 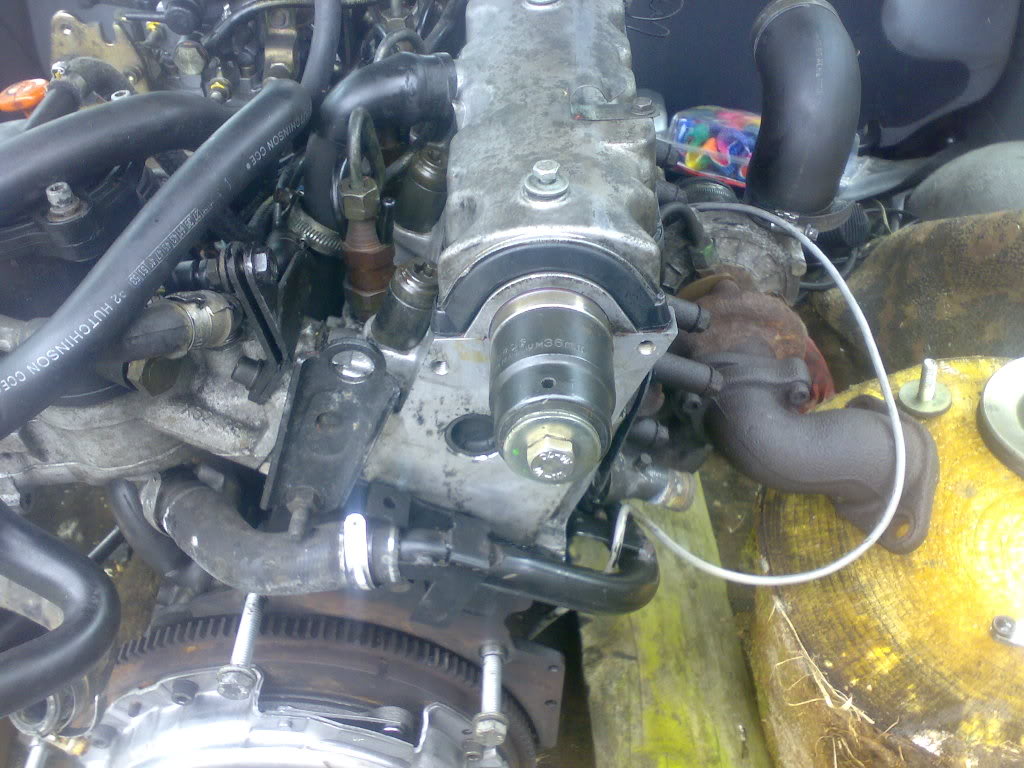 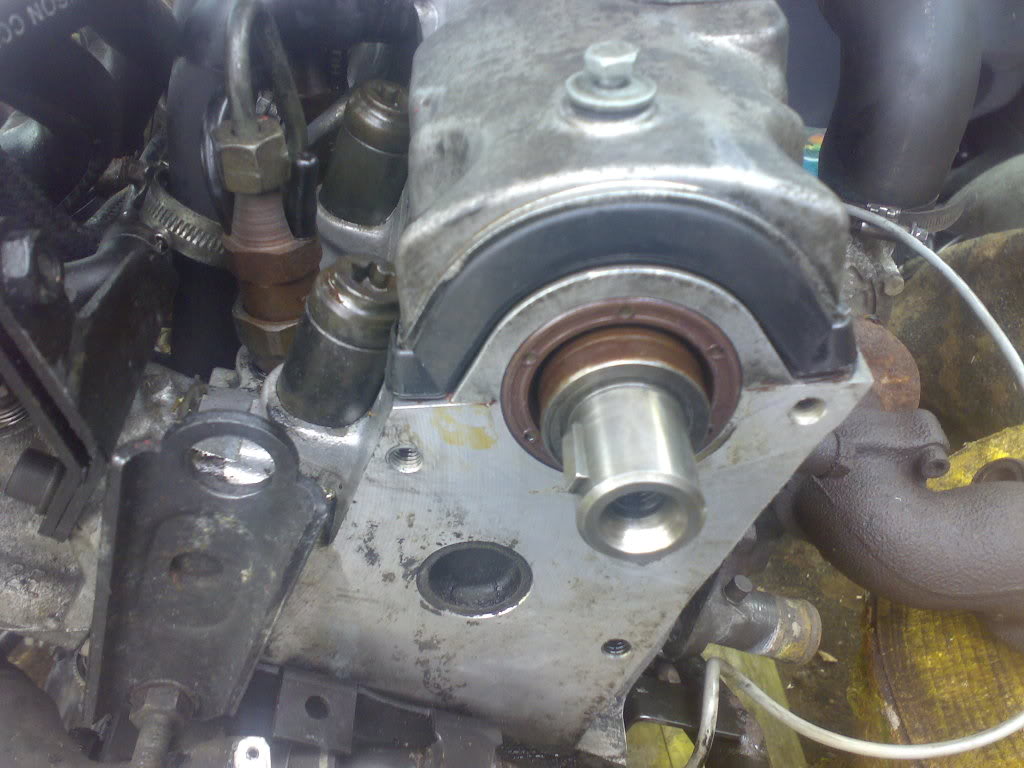 Off to the motor factors later (an hour round trip

) to get a new inlet exhaust gasket and then it's time to swap the turbos over.
Top

Good work Mat! Looks as though you're living on a Xmas tree farm.


Yesterday I mainly boxed in some pipes in the bathroom

Funnily enough that was my afternoon's work yesterday. Looks better and hope your's the same