Just a single in line joint I imagine, and replace from before the damaged bit, back to the hc.

On the alternator front, see if you can get a part number off it, I'll see if we can find something to replace it with. You'll understand when you clock the make on the side.

Vanny wrote:replace from before the damaged bit, back to the hc.

Hmmm, problem is that the union on the HC looks like it's been sat at the bottom of the sea for a few years...I'd rather not try and undo it unless I have to! But I suppose that would be the best solution, as I'm only delaying the inevitable


Vanny wrote:On the alternator front, see if you can get a part number off it, I'll see if we can find something to replace it with.

D'oh! NOW I read this...£90 odd later. Lucas LRB00359 on the side, but please don't say what you could have got one for! TBH, I needed it to be mobile straight away - the only other fully working vehicles are the Disco (needs MOT) and the van (prepped for paint) so I had to bite the bullet and buy it. If I had a spare car on the road I'd have had a go at repairing the old alternator, but I just needed a quick fix. A couple of weeks later and both the van and the red BX would probably have been finished, but that's life. 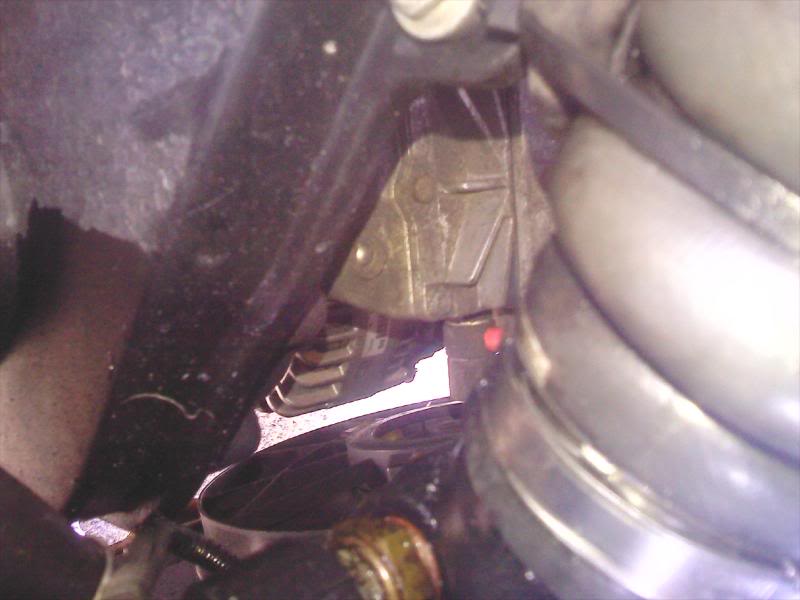 ...but slightly easier from underneath. 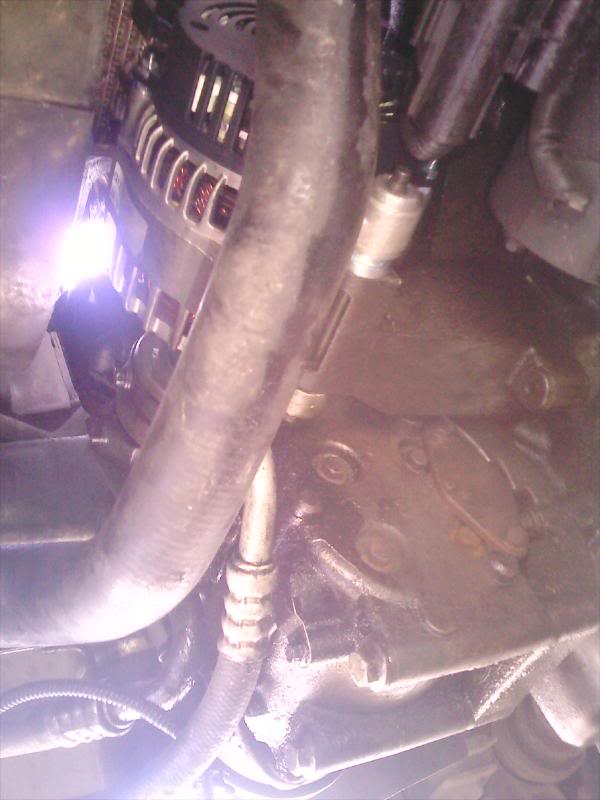 Only took half and hour to get it out, and same again to put it in - took longer to get to the motor factors! Now charging at ~14.5 volts.

Most of the rest of the day has been spent chopping firewood, so am aching slightly now. But I did get chance to sort out the height corrector on the white one. Here it is stripped down a bit: 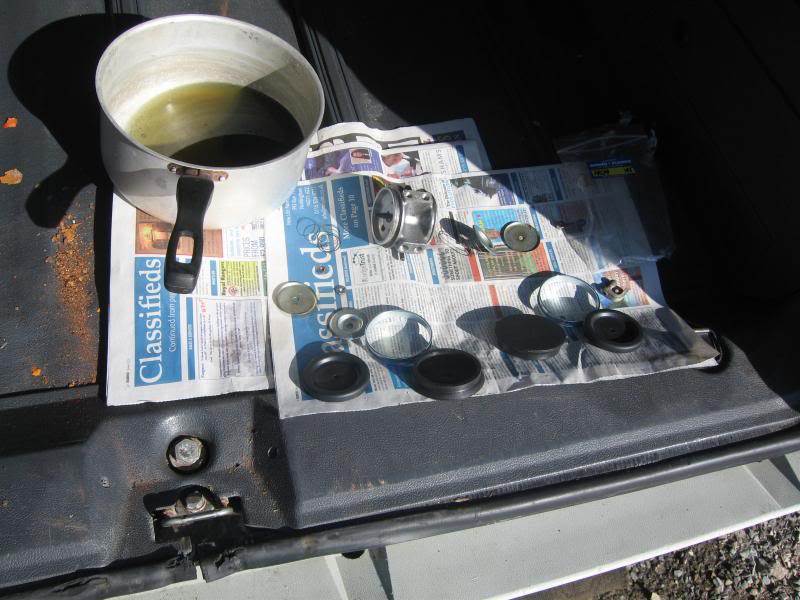 I did take the slide valve out and clean the internal passageways (in the saucepan full of murky looking petrol). Then back together with new diaphragms... 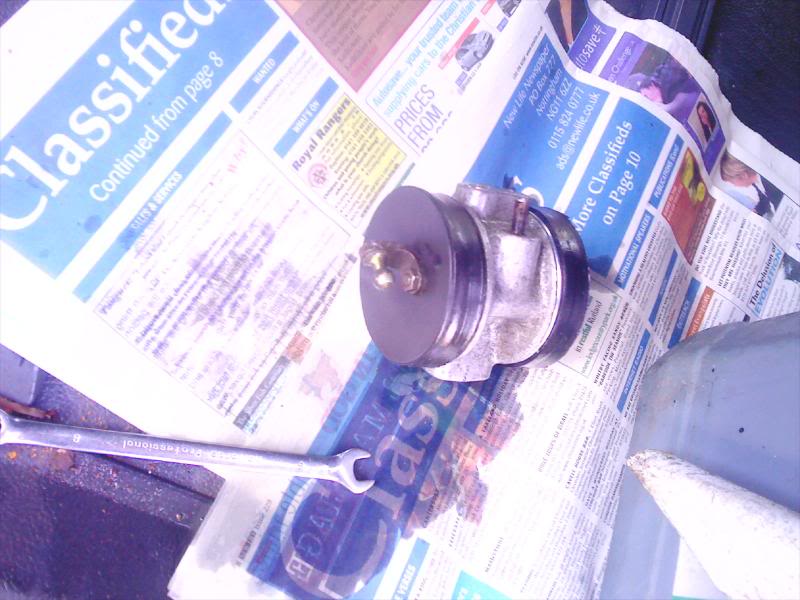 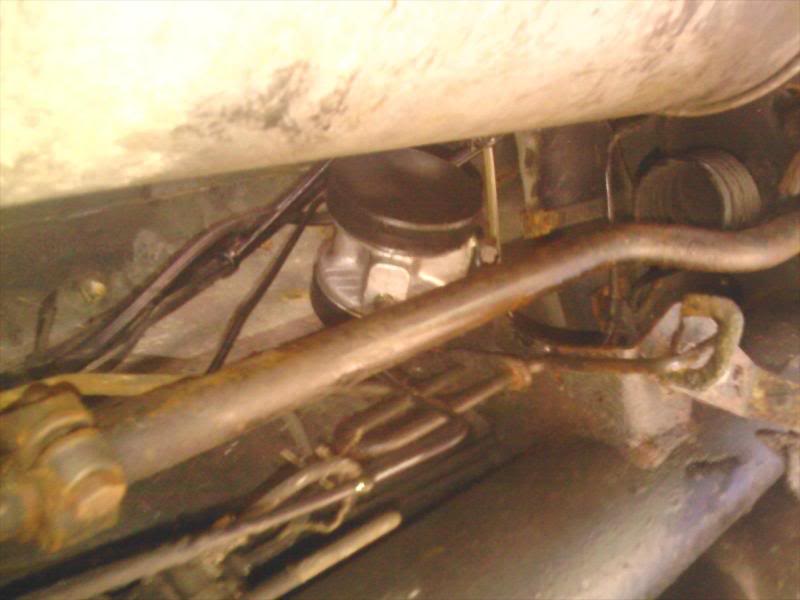 Time to see whether it rises, and it does! 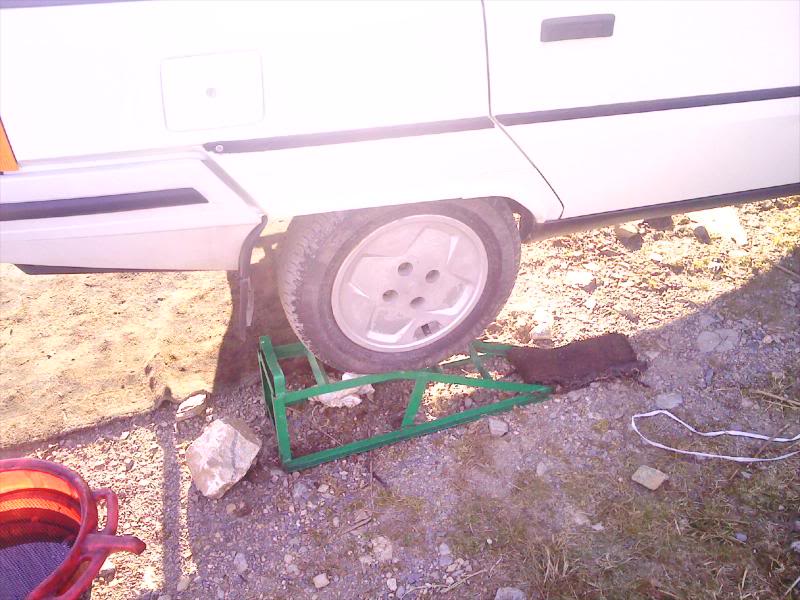 And now time for a grumble - the logging trucks have been trundling past for the last few weeks, fairly uneventfully. Until this. 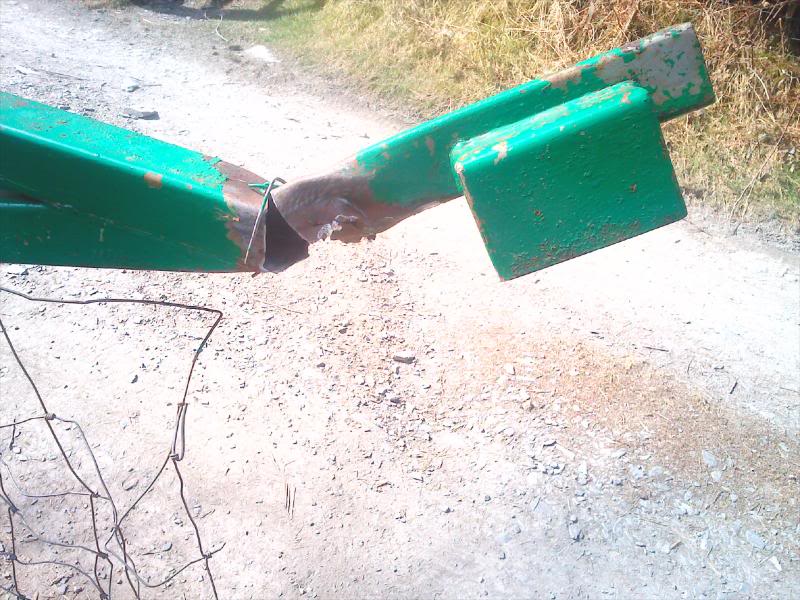 It seems one of them has hit our gate, and buggered it fairly impressively. I did wonder about trying to weld it back straight, but the difficulty would be getting power to it. We've reported it, but aren't holding our breath they'll replace it any time soon

If the pipe is knackered, take the hcc out, cutting the pipe, and undo it in a vice?

On the alternator front, I was thinking of building one out of the scrap bin, but the scrap bin has been emptied, honestly. Feel better.

That would mean removing 3 pipes rather than one...think I'll see how easy (or otherwise!) it is to crack off before deciding. Wondering whether to try a soldered repair if I can find some close fitting tubing to sleeve over it with.

Today saw more firewood cutting and fitting new rear discs and pads to Lana's MINI, but also managed to change the rear spheres on the white BX - getting a faceful of LHM in the process 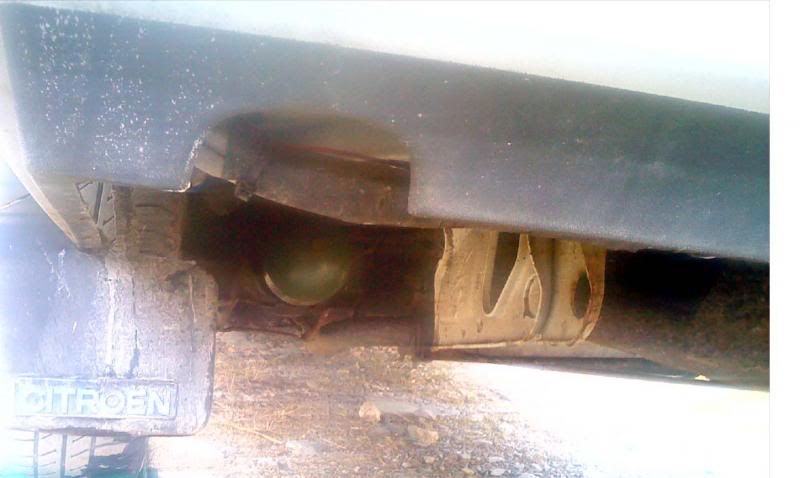 Should ride a bit better without a ruptured sphere!

Also did some paintwork on the van, although the flatting back took longer than actually applying the paint!

The colour hasn't come out true to life in the second photo, as daylight was fading - it's less 'in your face' than it appears. I'm really pleased with the colour; just what we wanted and although it's hardly a concours job when you apply it with a roller, I was pleasantly surprised how the marks disappeared as it dried.

Coachpainting! You need a man called Mat, another one that is, he's going to coach paint my bus, he's properly epic at it!
Smokes lots, because enough's enough already!

We've now had half as many dry days this year as we did in the whole of last year! Sadly it's due to end so I've blagged the use of a barn for a few days/weeks so I can finish the paintwork on the van at leisure. It was a 15 mile cycle ride back, which was quite fun as I've not done any road cycling for years - amazing what speed you can get up with smooth tyres instead of knobbly ones!

Then cut a bit more firewood this evening while it was still dry...and seeing as the white BX was not doing anything I thought I'd put it to use carrying the logs to the wood shed.

Probably not as heavy as it looks, as it was pretty dry. Should burn nicely!

I've been thinking today about the corroded hydraulic pipe on the red BX - if it was under full pressure then surely there would be no seepage; it would just spurt out at great speed. So, it must be the return pipe that's affected. It all makes sense, as I only noticed leakage when it was taken off the road - when it was being used every day it didn't often get chance to sink so there would have been very little passing through the return pipe.

Which means I can do a temporary bodge for now until I feel the urge to do all 4. I have some injector leak off pipe which has an ID of 3.2 mm, which should be a good fit over the 3.5 mm hydraulic pipe. And seeing as it's only a low pressure return, fuel pipe clips should hold it in place securely.

In other news I won a tailgate latch mechanism from eBay for 99p which looking at the photo appears to have the tailgate open switch present. This has been missing from mine ever since I bought it. Something to fit when I get bored...

Sadly it's going to end? We're desperate for rain here! A couple of days would be nice, then it can sod off again for a bit.
www.classichub.wordpress.com
Top

In my experience, if you get a pin hole leak on one of the rear high pressure pipes, you tend to get a green mist emanating rapidly to encompass the entire car! The two times this has happened to me (once on the valver, once on the RD) i have been in reverse on a moderate incline. I suspect this loads the suspension just that little bit more, causing the weakness to open up.

The only high pressure leaks I've had I would agree!

Tonight saw me stripping stuff off the van ready for paint: 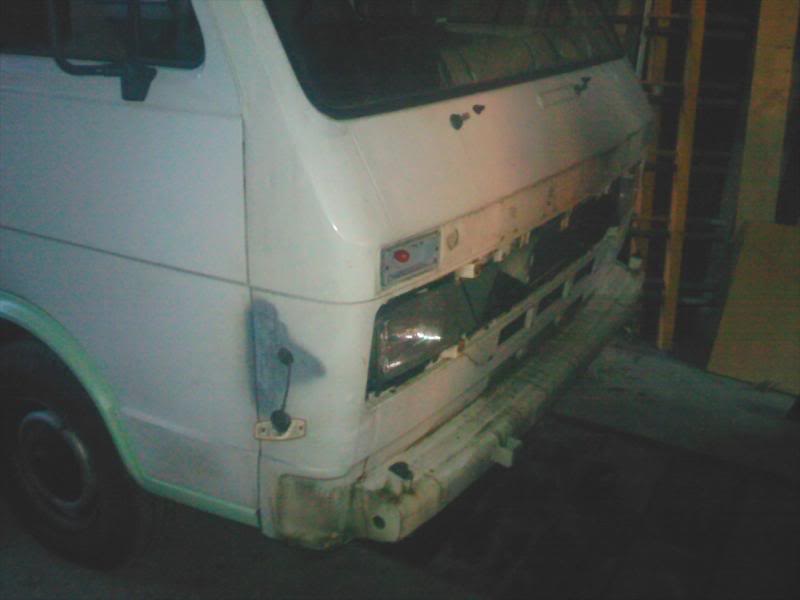 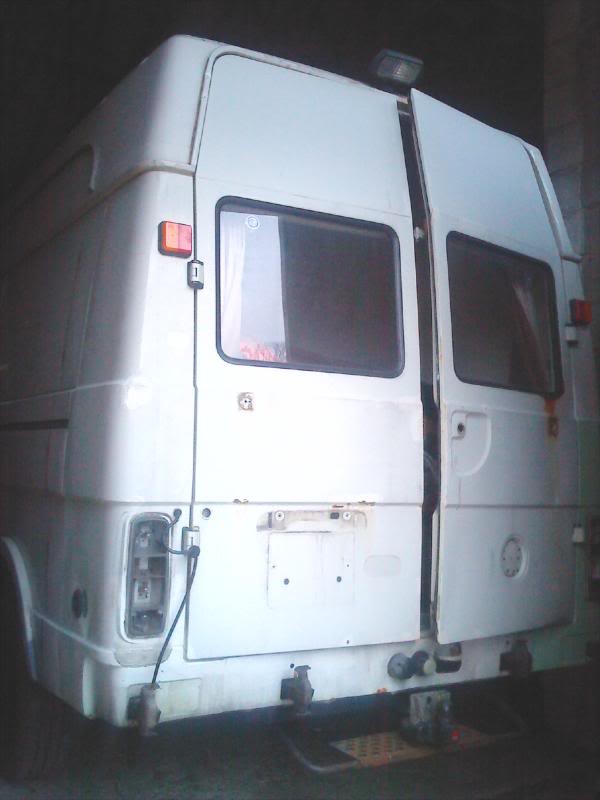 Then trying to unload the wood from the white BX... 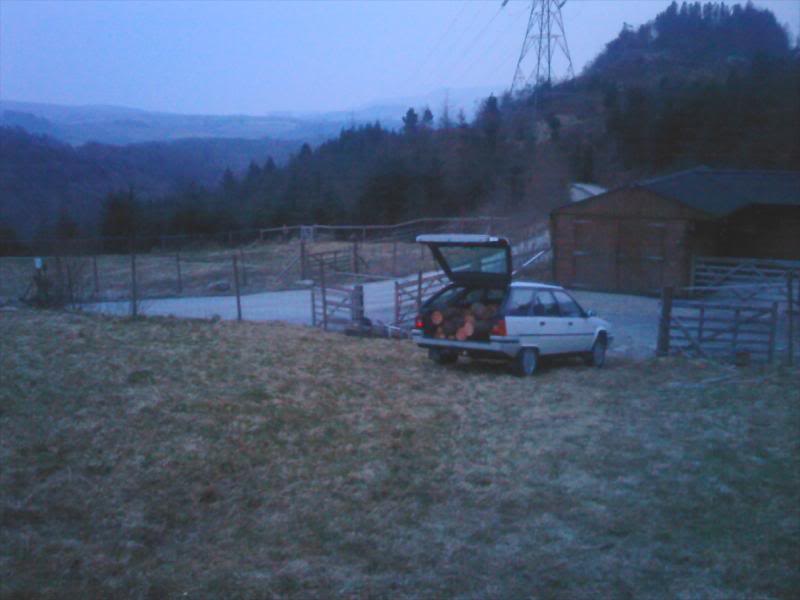 ...unfortunately I couldn't get any closer to the wood store until I'd taken some weight out - the wheels just span on the grass.

Still no rain, and a glow in the sky alerted me to the fact the forest had caught fire!

Fortunately the wind is taking it away from us, so we can sleep relatively easy tonight. Unless of course another one starts the other side of the house...

See? Rain is a good thing! As soon as it stops, Wales catches fire.
www.classichub.wordpress.com
Top

mat_fenwick wrote:Fortunately the wind is taking it away from us, so we can sleep relatively easy tonight. Unless of course another one starts the other side of the house... 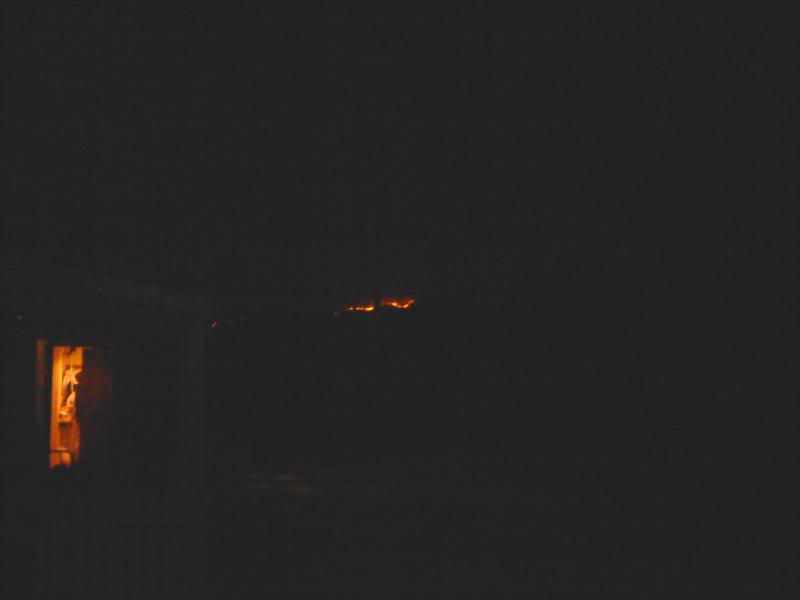 Another fire on the opposite hillside

Still not too worried, as there is a road between us and the fire. But a bit eerie to hear it crackling away...better not wake Lana otherwise she'll worry about it.

Looking on the bright side I then managed to repair the LHM leak on the red BX as this (fuzzy) photo shows. 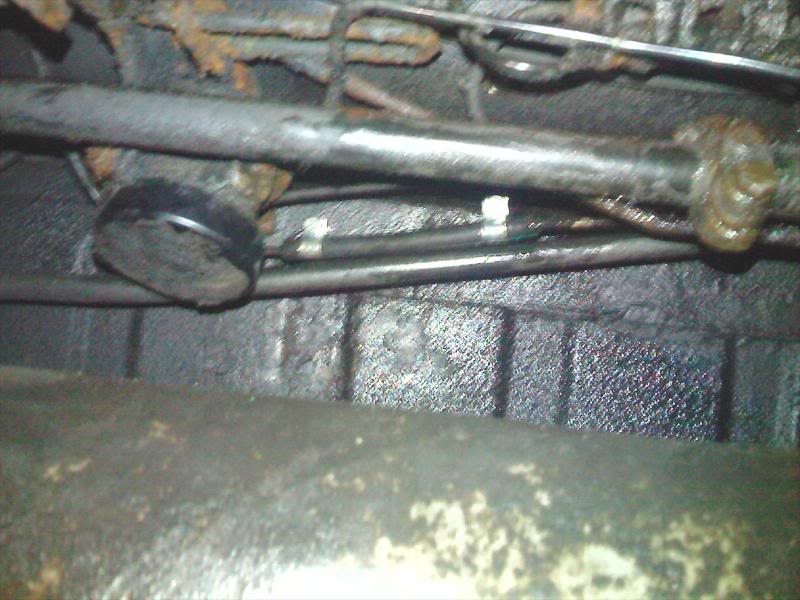 The true test will be dropping it to low and having the fluid return back to the reservoir, which I can't do as the back end is in the air. Seems dry so far though!

Spent about 2 hours sanding back the paintwork on the van today in readiness for painting, and found a few spots of rust (surprise!) which need sorting first. Only one hole though, behind the front bumper and seeing as it's a) hidden and b) there's no decent electrical supply where it is right now I may leave welding it 'till a later date.

Re-wired the chainsaw and replaced the chain tensioner, then squeezed in a bit of BX tinkering. The headlining is now back in the red one after welding/sealing the roof. Also fixed a distorted rear light lens by heating it with a lighter and then clamping in the vice. It's not the first estate lens I've seen that has distorted around the bottom, so the only things holding it on are the top screws. Must be the heat from the foglamp bulb?