Finally got round to wiring up my console lock/unlock switch as mentioned in this thread. 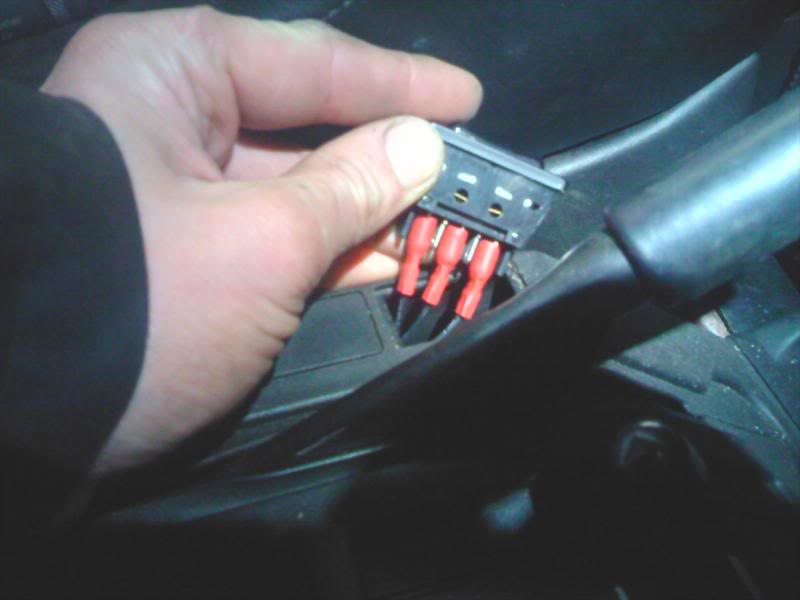 ...the centre one being connected to earth at terminal 2 of the central locking module 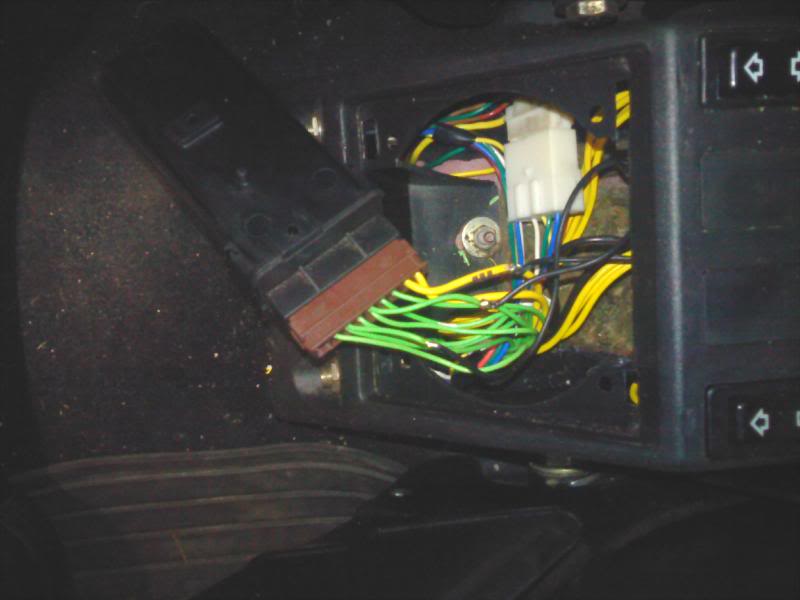 The other two wires (locking triggers) are connected to terminals 5 and 7. Insulate the new connections, and job's a good 'un!

I guess this is going to confuse the hell out of an 'intelligent' remote central locking system (the type with only one button). Easily overcome by pressing the remote again if it doesn't lock, but you'll never quite know if you need one press or two. I already get this problem if i lock the car by key instead of the fob. I suspect this might be why some modern cars only have a single button to lock/unlock the doors.

The volvo v70's got internal lock buttons on both front doors.

I believe they were put there to keep the lower classes and hoi poloi out lol
1991 BX Meteor 1.6

Vanny wrote:I guess this is going to confuse the hell out of an 'intelligent' remote central locking system (the type with only one button).

You're probably right (although I haven't checked), and it's something I hadn't thought about. But in practice I don't think it will matter, as I can't think of a situation where I'd lock it with the switch and unlock it with the fob. TBH it's more a little gimmick to fill one of the switch blanks, and I'll probably rarely use it. But more switches = better!

Back to the rear wing rust now - as the panel is on its way I could set about hacking into my rear wing. Here's what it looked like before: 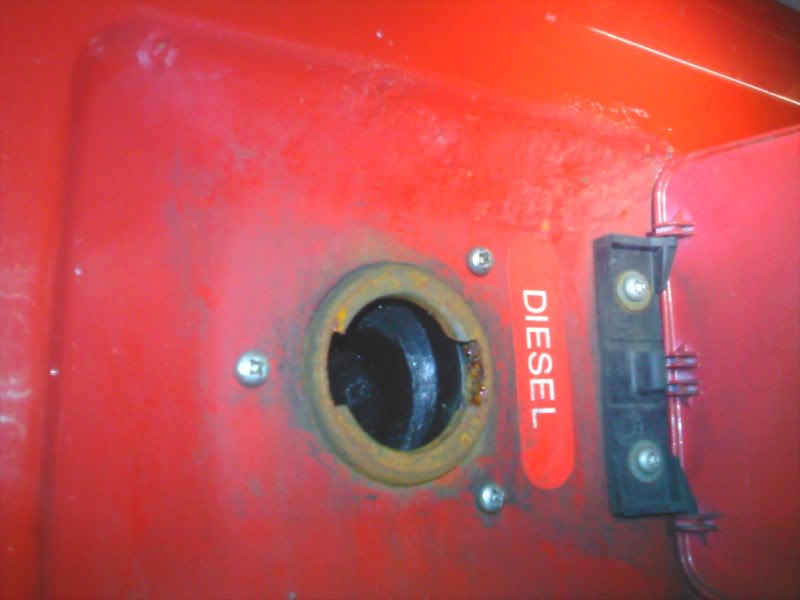 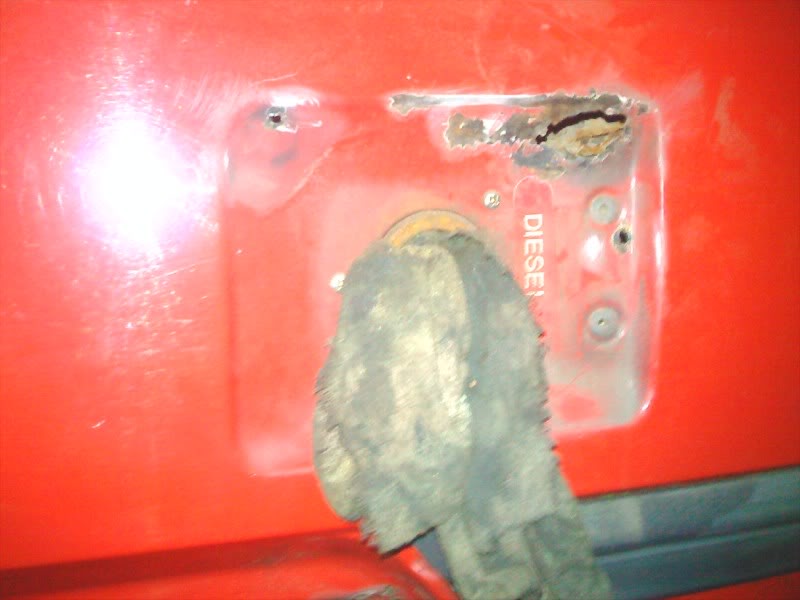 Notice how the filler neck appears to be fine, which pleased me. Fast forward a couple of months to now, and I attacked the panel with the angle grinder. 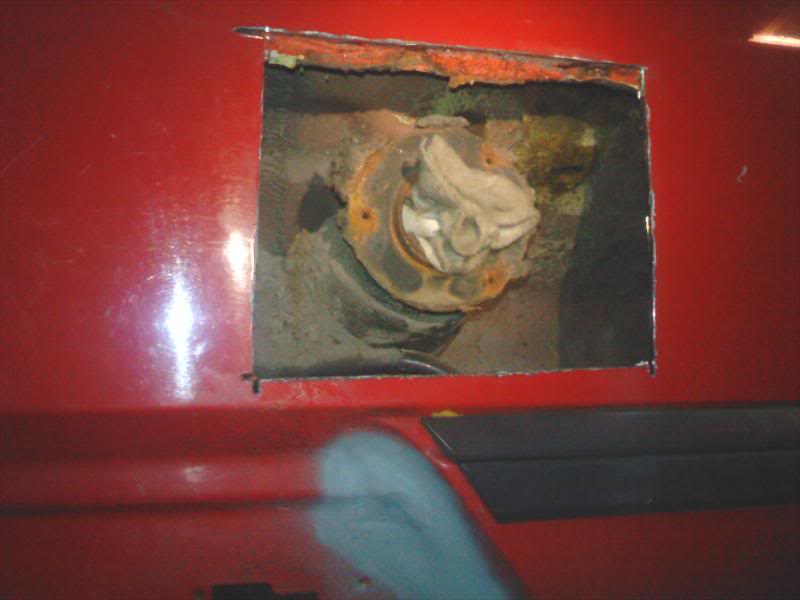 Lots of mud present, despite regularly hosing out and a thorough pressure wash before taking it off the road. The mud was all slate dust and pine needles (i.e all stuff from our track), so a city car would probably not suffer so much. The reverse of the panel shows how much the rust extends, so trying to butt weld in a couple of patches from the front would have been tricky to weld to the weakened steel. Plus, I would never have been able to clean up the rear face satisfactorily. 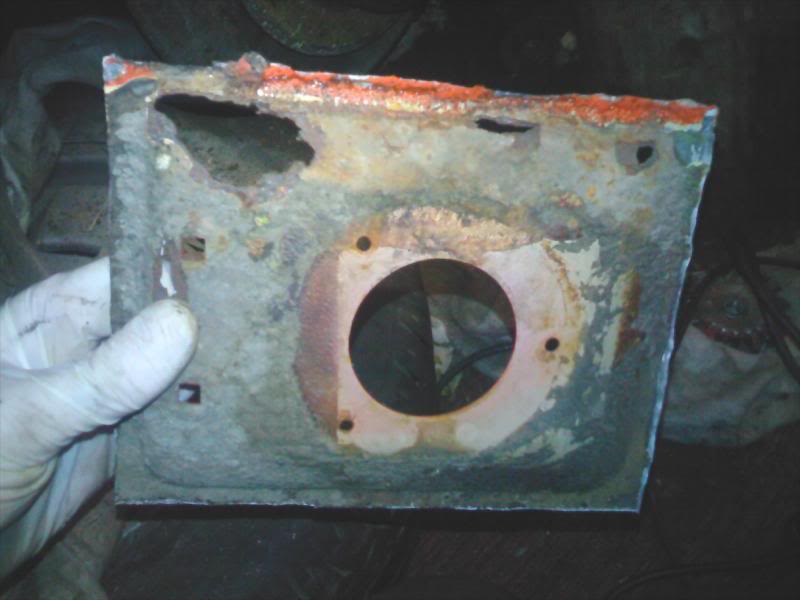 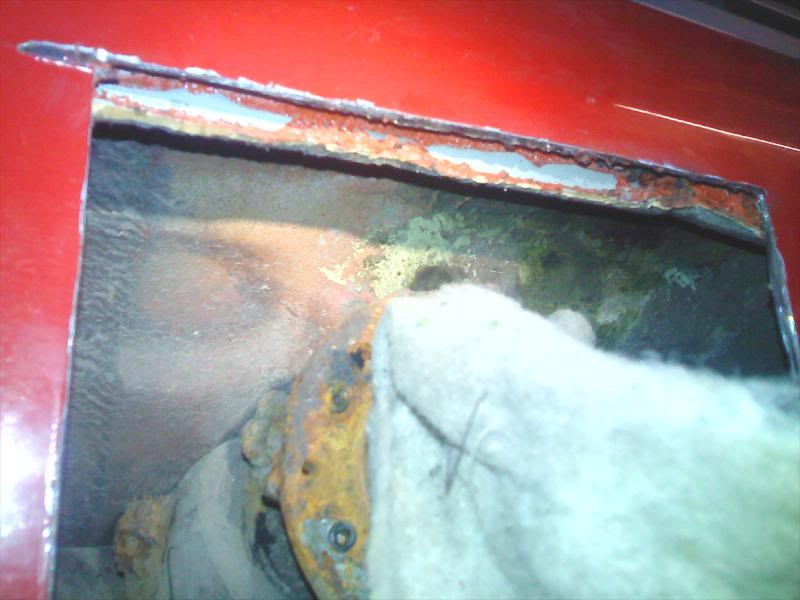 ...but let's have a closer look at the filler neck. 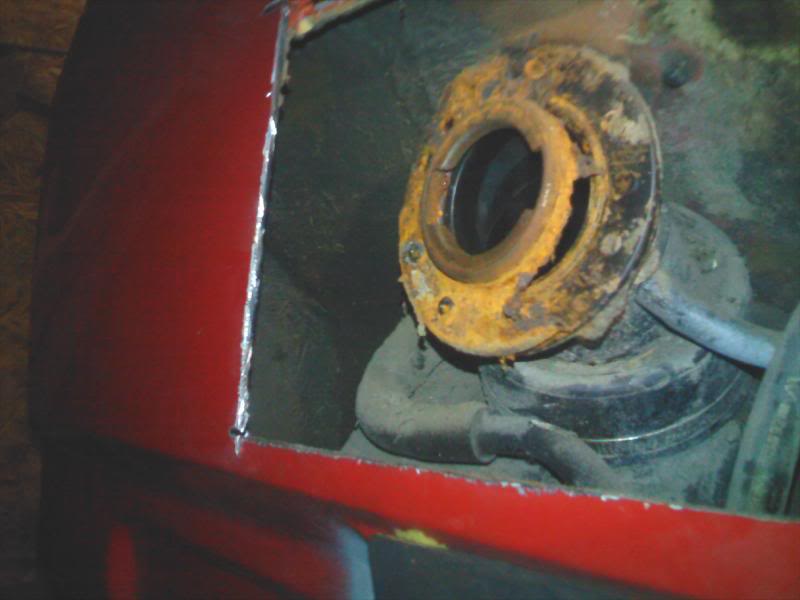 Bugger. Although the neck itself is OK, the flange which the flap engages into (no smutty remarks required please

) has corroded away. It's another one of those jobs I haven't done on a BX before, so I'm unsure whether that is available separately from the neck (it's riveted together so doubtful). I'm off to trawl the forum as I'm sure my question has been answered previously. I know Chevronics have some new necks in stock, but would rather keep costs down if at all possible after my recent eBay antics!

EDIT - I've discovered that the flap locking ring is what I need, so will see what I can find...last resort is borrowing the one from the white BX, as that appears perfect from the outside at least.

Just wondering Mat, if I removed the screws from the filler flap hinge, would I be able to insert a waxoyl probe into the filler neck cavity?
Mark Smith

Eh? You're the second person to mention that in the last two days!


if I removed the screws from the filler flap hinge, would I be able to insert a waxoyl probe into the filler neck cavity?

Well..yes if the tube was thin enough - the Bilt Hamber aerosol ones would fit but my usual compressor gun probe wouldn't. But it would only really cover the area forward of the filler neck, not all round it. The area is accessible from inside the wheel arch once the wheel is off, and you'd want to clean any mud away before applying Waxoyl anyway. I reckon if you reached up with a hosepipe you'd be able to loosen any mud with your fingers and wash it away.

Bugger. Although the neck itself is OK, the flange which the flap engages into (no smutty remarks required please

) has corroded away... I know Chevronics have some new necks in stock, but would rather keep costs down if at all possible after my recent eBay antics!

At least you have a flange! Mine is more or less brown dust! This is obviously a serious corrosion trap and I'd be tempted to get a decent replacement in there and smother it with anything that will protect it. I've just seen some new photos from Chevronics of that area on the St Tropez and it is scary what goes on in hard-to-clean places. Needless to say, the old wings were toast. I'll post them up shortly.
BX14TE St Tropez 1990 - now sold
Xsara Forte 1.4i 2000
Kawasaki GPz550A4 1987
Top

I read your blog assiduously Mat, but in general I never have a clue what you're hammering away at. It always puts me in mind of this though . . .

What the hell is he building in there? We have a right to know.

First thing I do when buying any oldish car is thoroughly de-debris the rear wheel arches. When I got the valver, nearly three years ago now, I spent the afternoon with up on the ramps clearing all the crap out from underneath. I'm sure some of the stuff I removed had been mentioned in the Domesday book, it certainly looked old enough. The worst car I had was an old Rover 820i that had belonged to a farmer.

Mat re the nuclear power station building conundrum. I can just picture you in your workshop working on the next project you've conjured up. Doc Brown from 'Back to the Future' springs to mind.

Would you ever catch me on the roof, signalling with a flashlight?

Would you ever catch me on the roof, signalling with a flashlight?

That was the bit that clinched the deal! lol

Tonight was mainly spend prepping the van for paint (still!) Should be able to get some primer on tomorrow, followed by the top coats later this week.

My tailgate latch mechanism arrived from eBay today, and depite being listed for an estate, was clearly for a hatchback. It mattered little, as all I was after was the switch mechanism to trigger the tailgate open warning light on the dashboard (were any estates fitted with this - I've only seen it on hatchbacks?) With a little bit of modification I got it to fit the estate latch. I also had to glue in the captive nuts which secure the latch mechanism, as 20 years of use has caused a couple of them to loosen.

Another thing that has seen 20 years of use is my mountain bike. I was out on it at the weekend, and noticed some play in the headset bearings. On stripping it down today I found that the upper cup which sits in the frame had shattered! I suppose it's done getting on for 10k miles, most of them off road so I can't complain.

Primed the bare metal on the van tonight, although I forgot photos

Here's a photo of the remains of the headset on my bike... 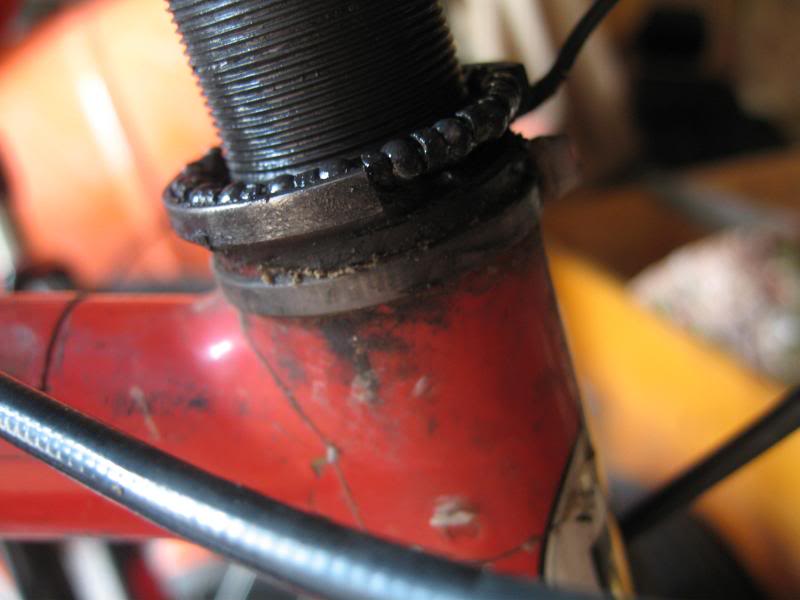 ...although nicely greased, obviously metal fatigue has taken its toll. Still, not much demand for one of that size any more so picked up an identical replacement for £15 delivered

Back to the BX, this is the switch added to the estate latch mechanism. Tailgate open: 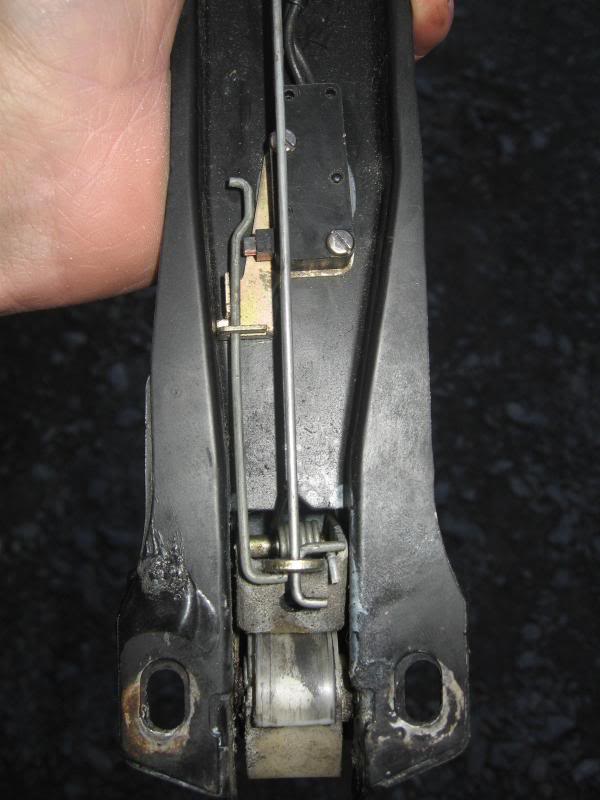 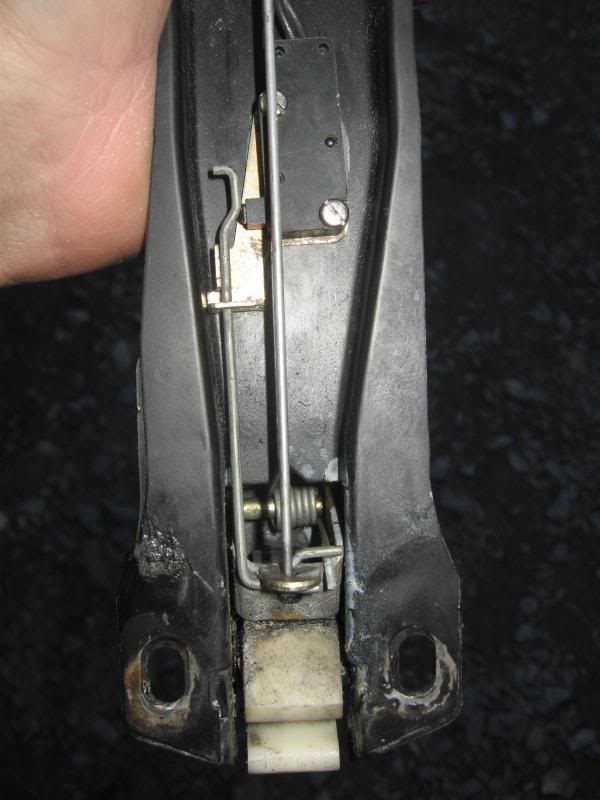 OK, I admit that I'm sad but little things like this are important to me! 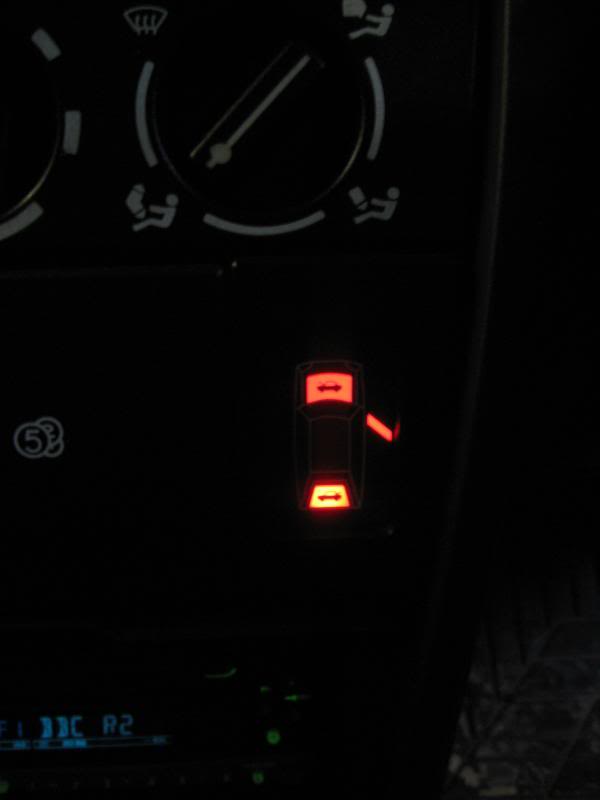 Just got to wait until the wing arrives now, and find a fuel flap locking ring from somewhere...best I can find so far is a complete second hand neck for £40