Of course, being a volvo driver I do expect a clear road ahead lol,
It used to makr me laugh when I had the trajet , everyone trys to pull out in front of people carriers thinking they are slow underpowered diesels,
First (safe ) opportunity I used to love eatching their faces as the old 2.7 v6 came on chat and I sailed past them
1991 BX Meteor 1.6

[quote="Mickey taker"]Of course, being a volvo driver I do expect a clear road ahead lol,

Reminds me of the Hedgehog/Volvo driver joke Mick!!

Des Smith wrote:Quick Mat, it's time we got back on thread - give us an update on your campervan before the lynch mob arrives!

OK then, if you insist! On my way to the Wetherby meet (which I'll take about later) yesterday, I collected some new cushions for the van (very rock n' roll!). Making full use of the BX's loadspace, but unfortunately that meant I had to put up a tent on arrival. 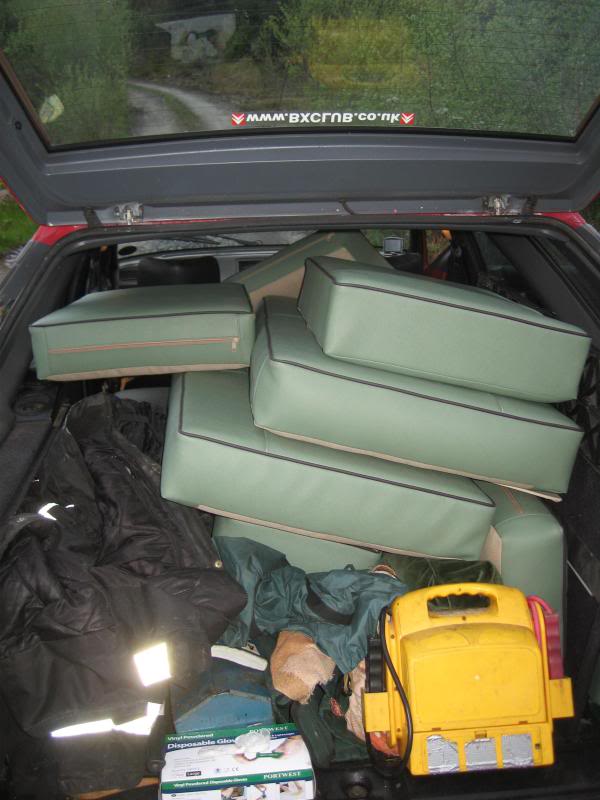 The quality is absolutely first class, and the little details are spot on too - this notch was to clear part of the van metalwork... 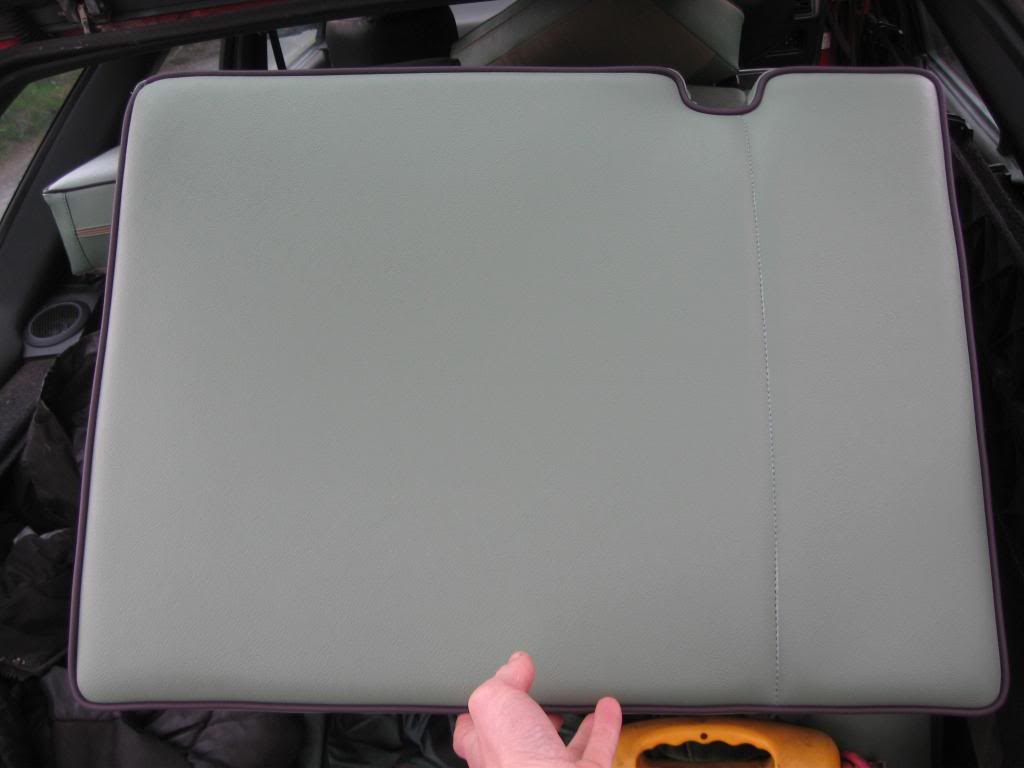 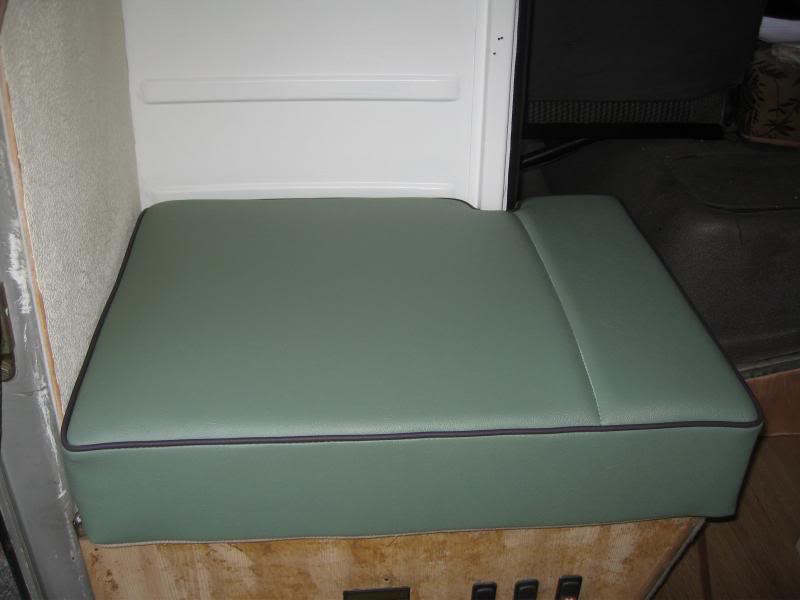 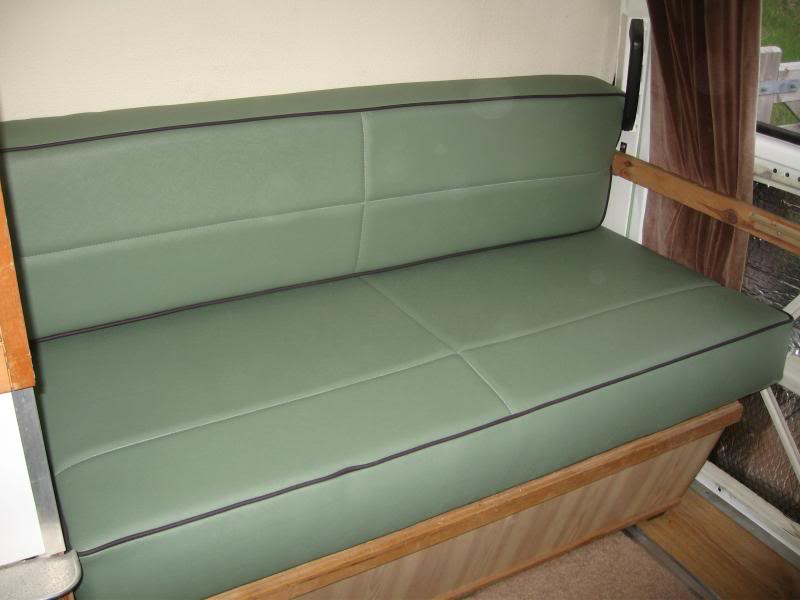 The box around the toilet is pretty much done too, although the play in the hinge means the front panel has dropped slightly from when I marked the hinge position. Not sure there's much I can do about that, but as I was thinking of some edge trim around the top it won't be visible. 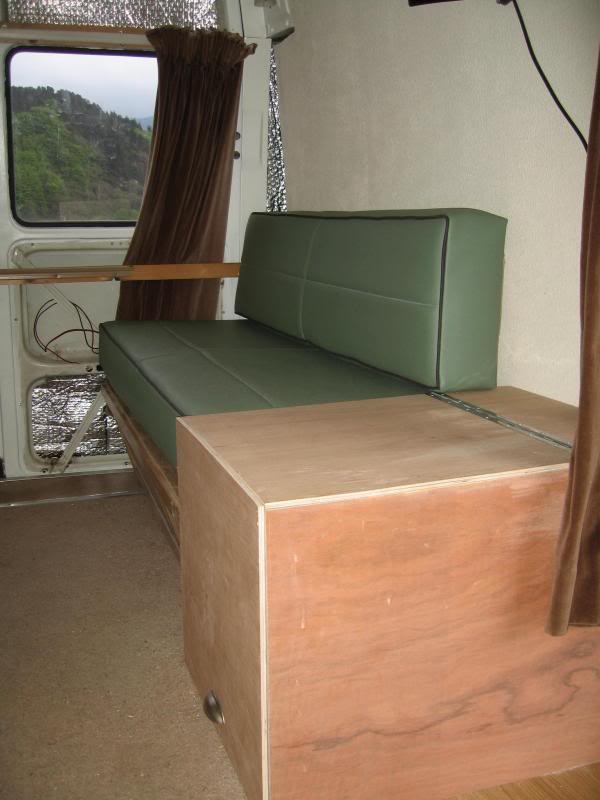 I wouldn't bother with a hinge Mat, just leave the big seat in the 'up' position.

I'm busy catching up on posts, and after reading this lot as a cyclist, motorcyclist-in-training, car, 4x4, campervan and caravan owner, I'm stuffed!

As a kid, I did the cycling proficiency test in school, something that I believe has since been discontinued, which probably has something to with the attitude of cyclists.

My first motor was a Bedford CF van - in fact after passing my test I drove nothing but vans for 8 years, some of which were LHD. This is something I'd recommend all drivers try, as the limited vision does wonders for your forward planning on the road.

Although I received no formal training, before I towed anything my Dad (a class 1 HGV driver with 40 years experience) taught me how to tow, including reversing.

While I wouldn't say I've never broken a speed limit, I've found that a lot of the people who get upset about the speed I'm driving are wanting to break the speed limit. On the other hand I've found that by driving a slow vehicle considerately drivers of faster vehicles are generally more patient.

For some reason, this reminds me of the final scene in 'The Italian Job' (the original one with the slow unreliable British Minis). It must be the angle and the rugged Welsh landscape through the back window, but I'm expecting the gold to slide inexorably towards the back door and Michael Caine to say...

citsncycles wrote:This is something I'd recommend all drivers try, as the limited vision does wonders for your forward planning on the road.

I do quite a lot of this these days, and i must admit, the first time, it was quite an eye opener. 3 litre v6 gives plenty of get up and go, but when you're sat on the wrong side in a very low car, that might not actually accelerate, you really do have to think about it!

I consider driving a skill to be developed and grow proficiency in. It's rather a shame that the governing bodies don't.

Defender110 wrote:Got to disagree with this Des, yes they needed a bit of regular maintenance but slow and unreliable! never!

We are on the same side, Kevan - it's just my twisted sense of humour. I really haven't got a lot of time for the BMW minis - skewed proportions and all that teutonic functionality has completely overlooked the essence of the car that Issigonis designed. The fact that they used the Mini for 'The Italian Job' spoke volumes for the image and reputation of the car at the time, and I for one will always have a soft spot for them. Having said all that, these days I'd rather look at them than drive long distances in one.
BX14TE St Tropez 1990 - now sold
Xsara Forte 1.4i 2000
Kawasaki GPz550A4 1987
Top

Hmmm, wonder if I should point Lana in the direction of this thread! She's pretty keen on hers, and I have to (grudgingly) admit it's good fun to drive. When she was test driving them though, it was interesting that the build quality seemed to vary dramatically, even between ones of similar age and mileage. Still, it's served her well and the only thing it's needed apart from service items in the last 25k miles has been a couple of exhaust mounts and a brake pad sensor.

Back to Citroens...I've got a Berlingo van in for rear axle replacement and some other MOT work at the moment - it seems to have seized solid! It's a 53 plate but has only done 19k miles from new, as it was previously used as a site vehicle for Portmeirion village. The owner seems happy enough that I'll not be able to get it done before I go away, so at least there's no pressure on me. Would be nice to get the white BX out of the way first (and pay for the cushions!)

mat_fenwick wrote:When she was test driving them though, it was interesting that the build quality seemed to vary dramatically, even between ones of similar age and mileage.

I'd never have thought it possible that BMW could be accused of producing a 'Friday afternoon' car. Well, well, they're not infallible after all!
BX14TE St Tropez 1990 - now sold
Xsara Forte 1.4i 2000
Kawasaki GPz550A4 1987
Top

No, and whilst hers feels pretty well put together (one of the best we looked at) it doesn't have quite the premium feel I'd want/expect if I bought one new, although still far better (if that's how you define better) than a BX say.

I forgot to mention the reason for leaving Wetherby early was so that we could go to a dog show on the Sunday. After the rain of the previous day it was a pleasant surprise to have hot sun in Wales! First day of the year for just a T shirt...I tried to soak up some rays but I was then used as a pillow.

A pretty good result though, better than my BX would have achieved in a show! Plus there was someone who would sketch a cartoon of your dog for £3 - I wish I had that kind of skill.

If you've ever driven a modern Mini, then you'll know what i'm on about

I do like the originals, they only share the name, but both have whats called the fun factor when driving them. Build quality is fine, not upto 3 series quality, its miles better than a BX tbh. I must admit to finding the views about the BMW Mini's quite interesting, quite a few people seem to actually have a hatred (probably never driven one either?) which is quite an emotive thing to have about a car, all a bit strange imho, but each to their own i guess. I plan on buying another, but it will be tax bustingly low & a diesel, viva la mini, erm