In my defence, never having seen 'El Presidente' in the flesh I didn't know what to expect. The only picture that I ever associated with him was his old avatar (and he didn't look anything like his photo...)

The mower I still think was a bargain, running ones go for £350 upwards and the equivalent model new is over £4k!!!

Even has 5 gears (although not much use without a running engine, at 250kg I'm not pushing it around.)

mat_fenwick wrote: The only picture that I ever associated with him was his old avatar (and he didn't look anything like his photo...)


Ah, that would of course be because Jon's old avatar was not actually Jon!

Mower racing at this meet at Mats anyone???!!!
Smokes lots, because enough's enough already!

So that's another project I have to finish then? Sounds like a plan is evolving though, can you imagine the carnage as we plough through Stewart's tent, fuelled by alcohol (the mowers obviously).

Any ideas as to how I can mention the idea to the wife? Maybe suggest she visits a friend for the weekend...

You sit her down, then gently say
"Right, me and the lads are getting together for a bit of a drinking sesh, you dont mind do you darling?"

She says "of course, that'll be fine honeybun"

Then you say "I'm really glad you said that, cos we're meeting up here"

By then she's said yes. Cant say fairer than that!
Smokes lots, because enough's enough already!

mat_fenwick wrote:In my defence, never having seen 'El Presidente' in the flesh I didn't know what to expect. The only picture that I ever associated with him was his old avatar (and he didn't look anything like his photo...)

Funny how you build up a mental image of someone and that person turns out nothing like you imagined...

Just like you Doc. From reading your posts, I had such an image formed and, well, I'd better not say or you might just come and rearrange the appearance of one or more of my Xantias

Needless to say, you were nothing like I imagined. One the other hand Mat, you were...
Jim

I don't know whether that is a good thing or not...

That reminds me - I brought along a few Xantia spares for you (alternator, driveshaft and a couple of lights) but I forgot to hand them over. Will you be coming along to Stratford do you think?

mat_fenwick wrote:Will you be coming along to Stratford do you think?

So....this is what's been happening in my life recently. On the DIY/house side of things I have replaced all the guttering - living in Wales that is kind of important! Also done a fair bit of plumbing in the room that is to become the kitchen, it now has a working LPG cooker, and hot, cold and waste water pipes. I hired another digger to remove more tree stumps, had the worst weekend weather wise imaginable, but removed about 30 stumps, 'levelled' the area and now grass is growing doesn't look too bad. 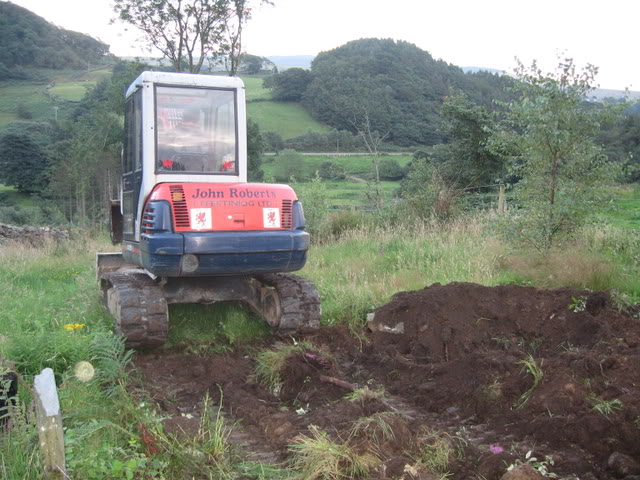 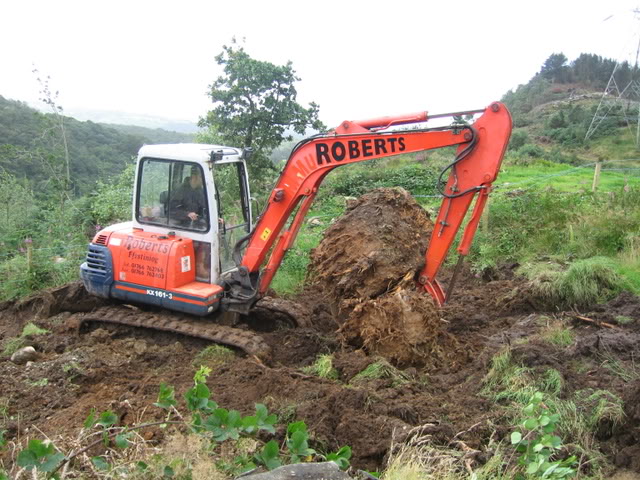 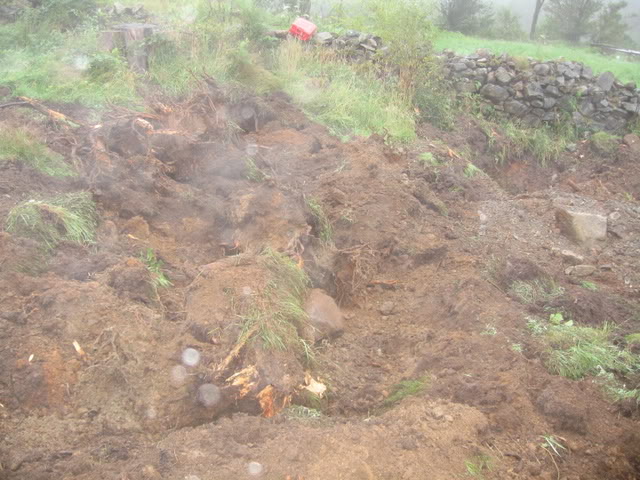 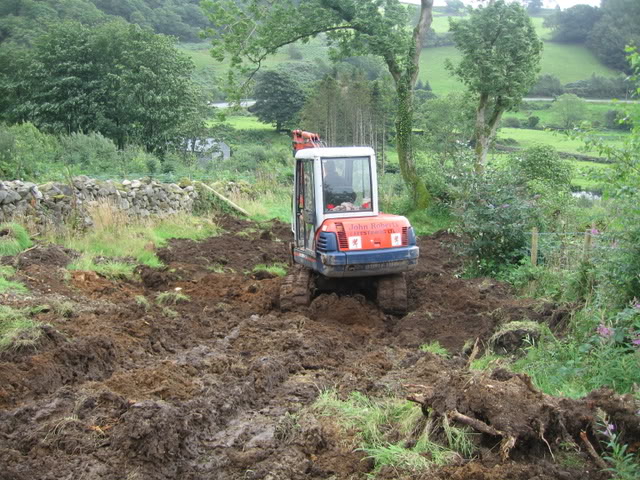 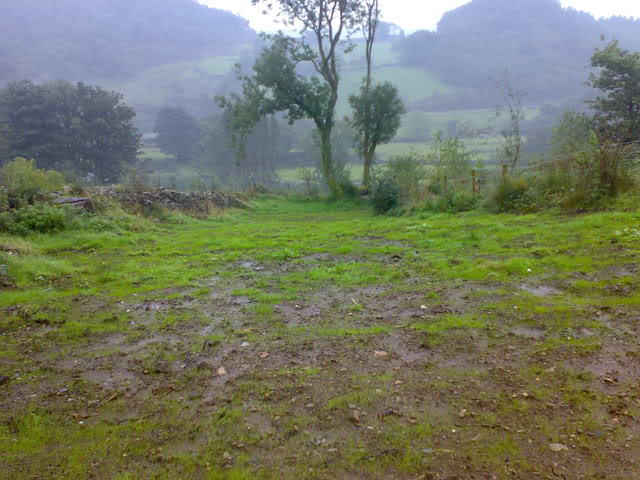 The mower still won't generate a spark (no, it's not 'gone off' fuel!) which is puzzling to say the least. The original coil checked out OK resistance wise, points are working correctly so I changed the condensor in case that was at fault (only £2). No spark. Maybe the coil is breaking down under load, so I replaced that. No spark. It's a magneto system with magnets built into the flywheel - they are magnetic but maybe not strong enough???
The BX - well I put a rag over the inlet manifold (intercooler removed) to keep any debris out. Needed to move it a couple of feet so I tried to start it, thinking I'd removed the rag like I meant to. Ran for about 3 seconds then stopped. Whoops I thought, well maybe not exactly that word. Spent 2 hours trying to get the inlet manifold off but can't get access to one bolt. Plus I still need to do the valve clearances, see if that's the cause for the running on 3 cylinders.
Just returned from a week touring France when I was stopped twice by Customs, twice by the Gendarmarie, and had the inside checked by the woman in the ferry ticket booth as she didn't believe it was a campervan! Do I look that dodgy? I have the job of route planner for the BXagon trip - I'm really looking forwards to the whole thing. I'm not a fan of Satnav systems but I am considering getting one before the trip as a back up, but I would hate to rely on one. Let's see if I am converted...
The next picture shows something that makes me very happy!

This may seem a little sad, but every vehicle I have ever owned has had a rev counter until I bought the van. It's something I really miss, and was in fact fitted as an option, all the wiring is there utilising a pickup in the alternator. But, it was extremely rare - speaking to a specialist LT35 breaker who has been doing it for 20 years, he has never seen one, so I thought the chances of me getting hold of one were slim at best. But while I was wiring up a few outbuildings for a friend down the road, someone knocked at his door (who had spotted my van) to tell me he'd just scrapped his van and wondered if I would like his stash of spare parts before he binned them. In the spares I found a BRAND NEW boxed rev counter that he must have bought but never fitted! Well worth £10 for the lot I think!

mat wrote:The BX - well I put a rag over the inlet manifold (intercooler removed) to keep any debris out. Needed to move it a couple of feet so I tried to start it, thinking I'd removed the rag like I meant to.

I did exactly that - only in my case it was a bit of kitchen roll. Wouldn't start afterwards so I just keep cranking it foot to the floor for a while, and it eventually stuttered into life, ejecting a large cloud of grey / black smoke and lots of little bits of charred kitchen roll in the process

Here's a bit of good news - having removed the rag and re-checked the valve clearances I found that there was no clearance on no. 3 inlet. A spot of re-shimming later and it turned out that the shim in there was nearly 0.3mm too big, the valve must not have been shutting properly when I initially did the valve clearances...
Anyway, it runs, and pulls very well on my brief test drive. I hope to get it MOT'd before the end of the month. More later when I have more time.

jonkw wrote: I'm pleased to see that you are levelling your "garden" ready for our tents!!!

Get yer kip mat out and get drinking - by the time you keel over into bed ye wont care if your sleeping on a mole hill or a mountain. I once bivi-bagged up Conniston Old Man - drink, and lots of it make for a comfy night.
Top
Messages: 1938