I had about 300 pirates on the bus Saturday night celebrating early for halloween, what exactley have pirates got to do with halloween?
Smokes lots, because enough's enough already!

Don't blame me, I didn't organise the party! I must admit being slightly puzzled as to why it was a pirate theme, but went along with it unquestioningly...

at least I'm not alone in my ponderings, I was beginning to think it was just me!
Smokes lots, because enough's enough already!

In other news I have been offered this 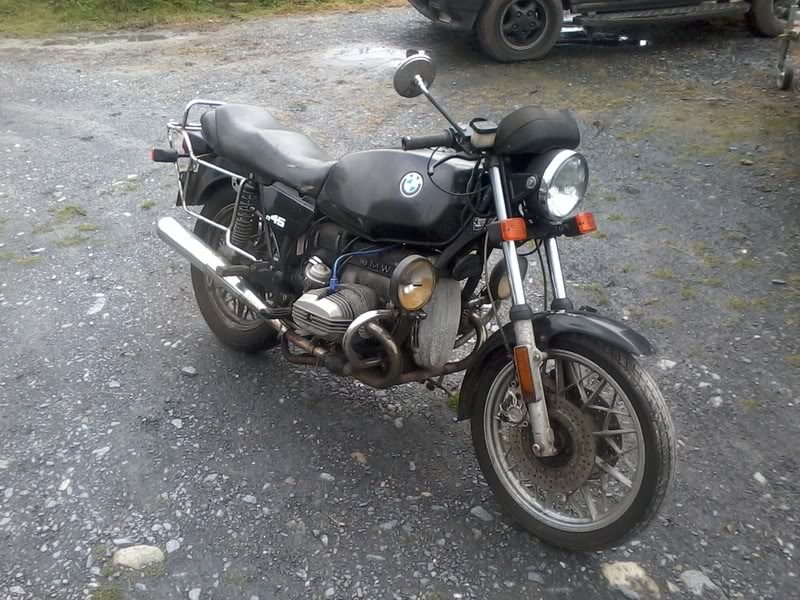 Realistically I've had to say no as apparently it needs a lot of welding to put it back on the road, although it would be worth a lot more than my bike once done. A shame as it is my ideal Landy and free road tax too! But we need the money more than another project. Problem is I don't want to get rid of my bike, even though it has been off the road for a couple of years. But putting my sensible head on, it's a shame to see it deteriorating in the shed.

Did a spot of realignment today... 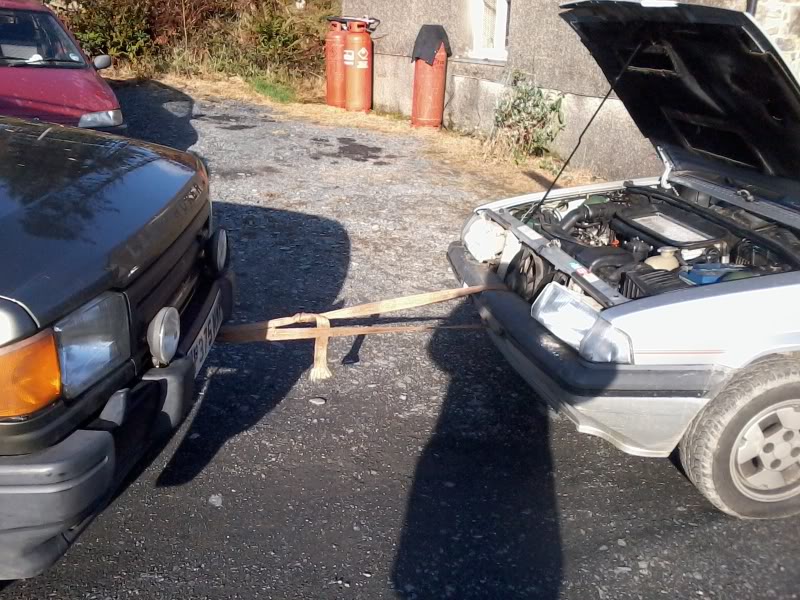 The front crossmember had been pushed in so it was pressing on the fan housing. Pulling it slowly just dragged the car forwards (despite it being in gear!) but a quick tug had it back to a more reasonable shape.

Ye, they bend dead easy them Land Rovers good job you had a tough work horse to straighten it again

Actually the Disco proved very useful earlier this week when we had an Asda delivery - after he'd dropped off the shopping he went on up the track to turn round the van. 10 minutes went by and he still hadn't returned, so I went outside and I could hear a revving engine So I went to have a look, taking the Discovery and a tow rope!

It's a poor picture but he'd tried to turn around on a sloping part of the track, his front wheels had sunk into the verge and he was tried to reverse back uphill with an empty RWD van! Not a chance. Managed to pull him out with no drama, but should have asked them to at least waive the delivery charge as we saved a tow truck coming out!

Had an unexpected afternoon off work yesterday, so decided to go to the beach. Bizarrely the weather seems to be improving over the last couple of weeks, as the sun has shone on two separate days in the last week! 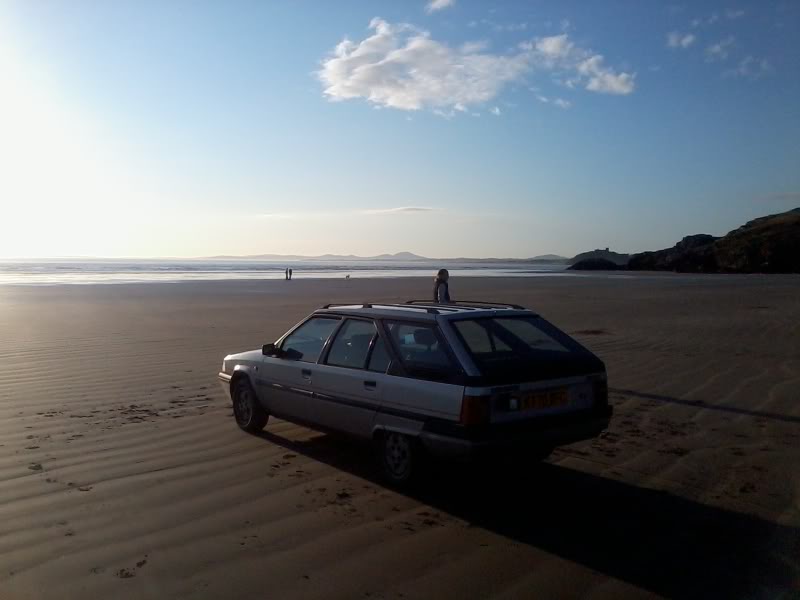 Back to the usual rain today, although a good weekend is forecast.

Nope , still a big fan of Landies, I don't miss my Disco II despite it being my longest owned vehicle by a good margin (5years) but I deffinately miss having a Defender. Unfortunately the L300 is better for purpose as it is selectable 4WD so can be used as a 2 wheel drive van for the many motorway miles (all over the UK from Plymouth to the Orknies) + I can sleep in it on arrival. All my Defenders were brilliant vehicles from the 200Tdi to the TD5's but they were not great motorway cruisers though I have already decided that I deffinately want to go back to a Defender when the time comes to replace the L300 and perhaps fit the Ashcroft transfer gear conversion to give longer legs when in High range without affecting low range.
Kevan
1997 Mercedes C230 W202
2003 Land Rover Discovery Series 2 Facelift TD5 - Daily driver / hobby days and camping.
1993 Land Rover Discovery 200tdi Series 1 3 door - in need of TLC
2020 Fiat Panda 4x4 Cross Twin Air.
Top

Defender110 wrote:selectable 4WD so can be used as a 2 wheel drive van for the many motorway miles

I wonder how much better that makes the consumption, I suppose it's difficult to say because you're comparing different vehicles. I presume that means that you can't run in 4WD on the road as there is no centre diff?

Personally I wouldn't want to go back to a vehicle with no centre diff, as a number of times I've found that there is actually better grip with the centre diff unlocked than with it locked. I.e. when you are turning the steering hard to one side, a locked diff means that some wheels will have to slip on the surface, and sometimes once you start to slip you can't regain traction. A lot of what we use ours for is towing, and often when you're manoeuvring a trailer you need to use full lock more than you would normally (or at least I do!)

The other day I picked up a car thermometer cheaply on eBay, so seeing as I broke the clock in the silver BX I thought I could stick the thermometer display in its place. It still looked a bit clumsy and stuck on (as indeed it was!) Until I had a thought. Upon sliding the clock module out I found that the thermometer fitted quite neatly in its place. Wired the backlight into the sidelight feed for the clock, and it looks almost original (apart from the modern blue LED!)

The only problem with this position is that the internal sensor picks up heat from the heater assembly (I don't really drive with temperatures of 36°C!) But that doesn't really bother me as I am only interested in the outside temperature. I don't drive along and think "I wonder what temperature it is so I can work out which direction to turn the heater knob."

Some modern part-time 4x4s have a centre differential as well! In fact, the Pajero/Delica can have a baffling array of lockable diffs, including the rear - which is very sensible.

I'm with you Mat. I don't want a 4x4 without a centre diff. It will just force a loss of traction if doing a tight turn. That said, I was aware than the Range Rover was probably wasting a lot of energy driving all four wheels when it didn't need to (that had a viscous centre diff though, very effective I found!).

Like the temp gauge. I still need to fit the coolant temp gauge to the BX (and the fan switch...). As well as many other things!
www.classichub.wordpress.com
Top

/\ Not that I'm aware of, but I guess with a bit of searching you might get lucky! This is what I got if you want to do the same.

I quite fancy a limited slip rear diff for the Discovery - that said I've not yet been in a situation where I needed one! I think the Merc G Wagen has 3 locking diffs, but they're not exactly cheap!