Pedal box out, piece of cake. Not sure if this is the easier or more difficult cable type though. 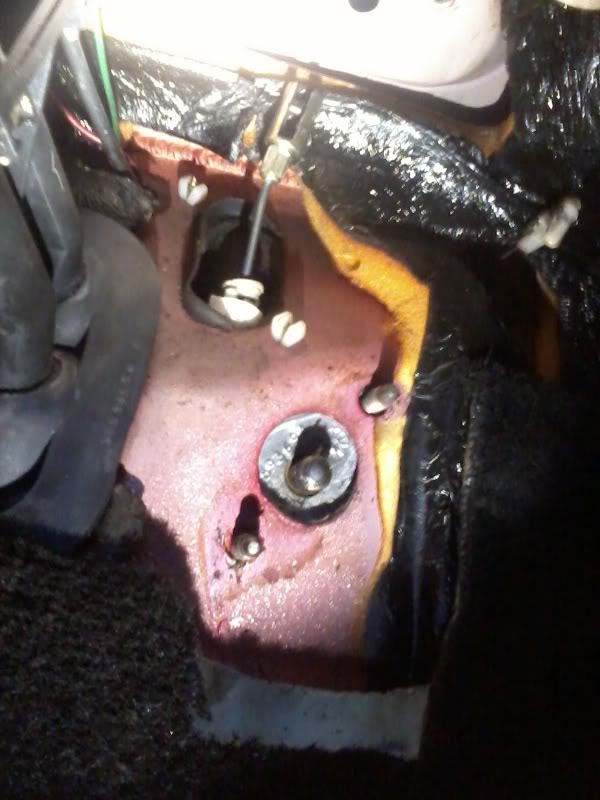 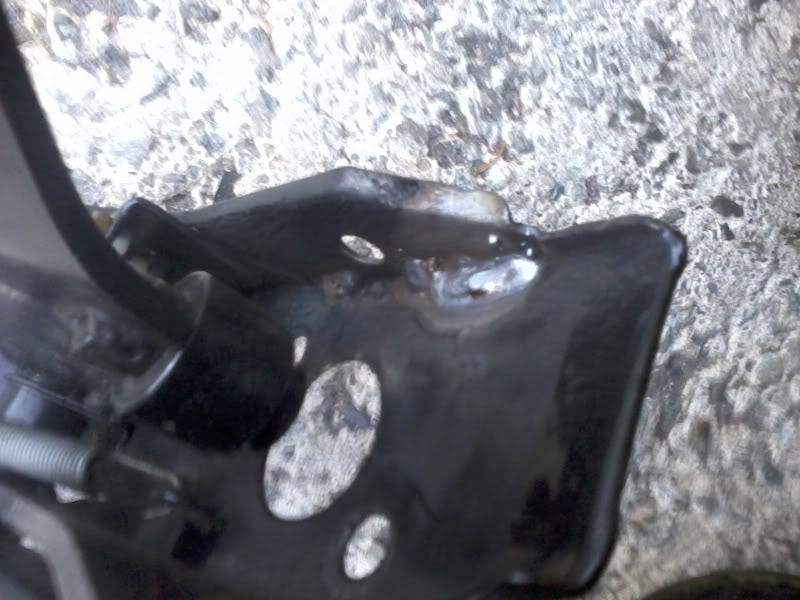 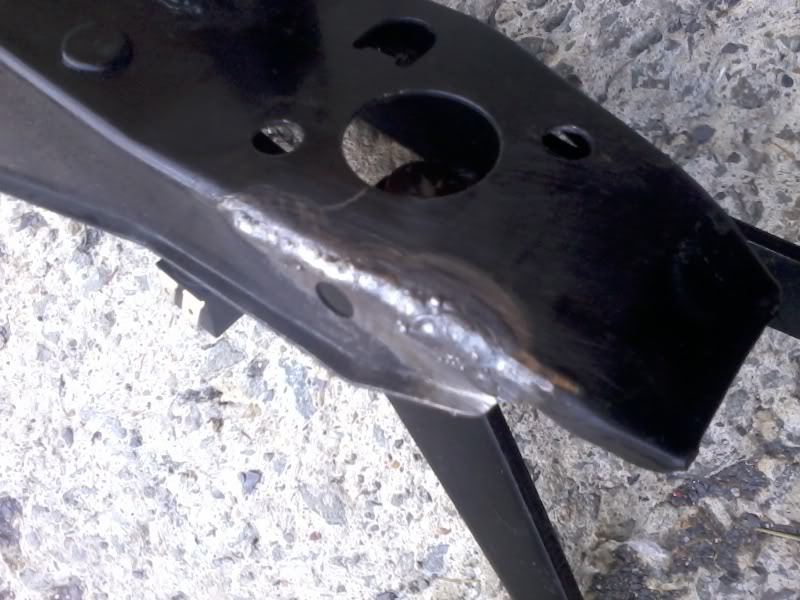 And a little bit of reinforcement. 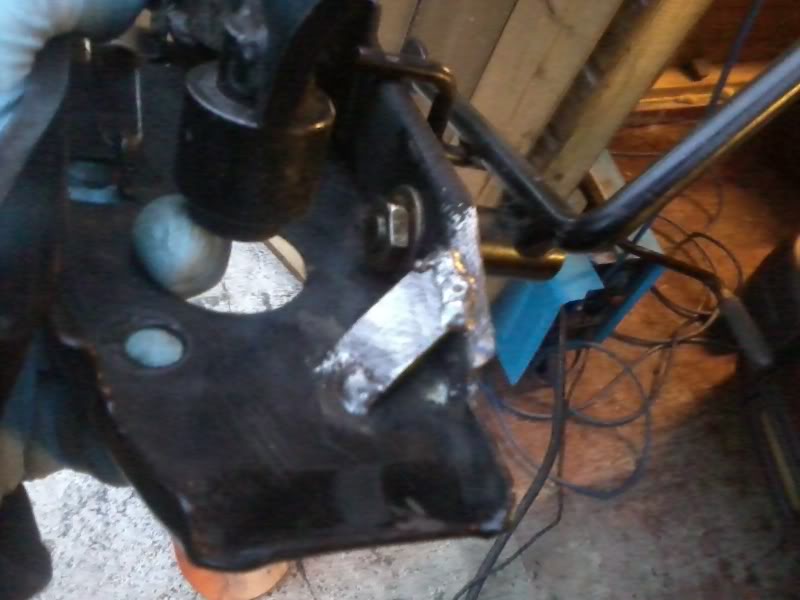 Back out now after tea to sort out the brake pedal spring and reinstall.

Given that I have just got in now, it's safe to say re-installation didn't exactly go smoothly....will explain more tomorrow but seeing as I have to be up in 3 hours, I'd better get some kip. Not that I actually feel tired yet, just pissed off!

You drilled that crack right?

Also, the spring is in the plunger head, which comes off the car very easily, then you remove the spring and put it all back together, there is no need to remove the doseur valve completely.

Wow - you we're up 'till 4 am fixing that, I'm glad I left it in before going on holiday!

It was all going reasonably well to start with - had it out, welded and painted by 9pm. By about 11 I'd given up with the old cable, and decided to fit the new spare I had. It seems like the ring which locks the plastic ferrule on the end of the outer cable into place is reluctant to stay in position if removed once.

So I go and fit the new cable, making sure to follow the routing exactly. That goes into position fairly easily, but there is no locking ring so have to remove the rectangular grommet down at the back of the engine. Access is tricky/impossible without removing the turbo trunking.

I think that with a new cable which locks into place, if you leave the gearbox end free you should be able to pull through enough slack to fit the cable easily, then thread it through without disturbing the grommet (although getting a new cable through the grommet may be difficult without removing it). Taking the throttle pedal off helps when maneuvering the pedal box back in without stressing the cable too much.

Anyway, pedal box end sorted, grommet, hoses and intercooler back on. Then I come to connect up the gearbox end to find it's the wrong bastard cable, and about 2" too short! At this point I realise two mistakes - firstly parking the BX up on ramps and blocking in ALL other roadworthy vehicles (it was now half 12). Secondly, gluing the bulkhead sound proofing back on with (very smelly) contact adhesive, when I then had to repeat the whole job.

Getting the old cable ferrule back into place was the trickiest part, as it would not stay in position when the pedal box was moved. I had to do it all down the back of the engine, and tilting that forwards would have (with hindsight) saved some time. You have to rotate the ferrule as well as getting it lined up, which was tricky with just fingertips, and probably took an hour just to do that. I still hadn't got it in position, when it started raining.

It was at this point that I shouted a few things that could probably have been heard in the next county (it certainly woke Lana up!) and kicked an oil drum. That didn't help in the discomfort factor, but bizarrely on my next attempt it snapped into place, and it was then just the straightforward job of putting everything back into position.

Spanner ratings - probably a 4, as you may get lucky and have it just pop into place first go. Closer to a 5 if you have big hands! Daylight would have made it quicker I think, as I had to feel the shape of a part down the back of the engine, then remove my arm and shine a torch down to see what it was. A headtorch helped, but still cast annoying shadows.

I oiled the old cable before putting it back, and that has made the clutch action smoother. The crack hadn't affected pedal travel, but I think it does feel stiffer i.e. there's no slight sideways movement of the pedal.

That's genius. We've got an old oil drum and I might position it near the garage. Kicking that would be more sensible than hurling expensive tools around when it all gets 'a bit much!'

What an absolute ball-ache though. Lesson learnt about blocking in other vehicles though perhaps? I had a similar thing with the Maverick and ended up abandoning it partly blocking our driveway. Don't think the neighbours/postman were impressed, though it probably wouldn't have been wise for them to argue the point at the time...
www.classichub.wordpress.com
Top

and Saturday was spent doing some DIY for a friend in return for him helping me by programming the PIC in the gauge.

Today was spent splitting firewood (inbetween rain showers) and replacing the exhaust on an '07 Mundano. To my surprise the existing system was in one piece from just after the manifold, so had to be cut into sections for removal. The new system was in 3 pieces, but it seemed a shame to waste a complete system (most of which was in good condition) simply because the backbox was rusty. Another indication of a throwaway society?

On another note, I really must ask for payment up front in future! It wasn't a problem in this case, but I was reminded that the last job I did was to fit some driving lights to one of our neighbour's pickup, as well as a few other odd jobs. I charged him (a very reasonable IMO) £30, to which he readily agreed. But I haven't seen a sign of him since!

You have a man that does PIC? How many

That does look rather tasty though!

I'm thinking about replacing the dash clock with something more fancy.

He's a guy Lana used to work with, who set up his own business. Looking at his website, he does code in C amongst other things. Mine is based around a 16F877, for the simple reason that that's what the circuit with the old LPG system used. So I cut a hole in the cupboard to mount the display, only to find there was a short within the PIC (it was drawing well over an amp!)

So in return for some DIY help with his house he wrote some code for me and loaded it on; apparently getting the right protocol for the display was tricky. Byte wide, 4-bits wide and serial (SPI) control were a few he mentioned to me that it could be before he got it working - maybe that'll mean more to you! As well as the display it will illuminate the LPG switch when below 1/4 full, and flash when nearly empty.

On the BX front, the mods to the brake pedal didn't work as well as I'd hoped to start with. There was still more pedal travel than I wanted but that was simply down to the gap between the pedal and the doseur pushrod (rubber cap was missing). Hence I had a very non linear pedal movement, with the first few mm doing nothing at all.

After adjusting the pedal stop position so that the pedal contacts the pushrod almost straight away, the feel is great. Very little movement, but nicely linear and progressive. Hopefully I'll get chance to compare it back to back with a Mk1 this weekend, but from memory feels very similar.

Um, might need to bleed the Mk1's brakes if you want a realistic comparison.

I haven't got around to doing it yet, though it seemed better after the roadtrip anyway. Maybe I just got used to it...
www.classichub.wordpress.com
Top

mat_fenwick wrote:Pedal box out, piece of cake. Not sure if this is the easier or more difficult cable type though.

Glad to know that it was not just my lack of skill that was slowing me down then!

I changed the front strut return pipes on Saturday, as one of them had split completely. I had noticed they looked perished when I was changing the ball joints a month or so previously, but (wrongly) thought I'd be able to squeeze another few months out of them.

Whilst down there I was pissed off to find that the new CV boot I'd put on had a small hole. Enough to coat the are with CV grease though. It certainly wasn't present a week or so ago, so can only assume a manufacturing fault or damage from a branch or similar. My plan is to repair with a bit of rubber and vulcanising solution, after injecting more grease in.

Very wet and windy today - I ventured out to check on the river which was quite high.

Most of the day without mains power, but fortunately we had enough petrol to last in the generator (about 10 hours). The guys who came to clear the trees off the line brought with them a chipper on a trailer, but unfortunately when they arrived found that a wheel had fallen off. So they asked if they could leave it here for a while until they could get some more wheel bolts and a wheel. They also said we could use it if we wanted, so managed to get some time off work to put it to good use!

Lets hope I still have the same number of limbs this time tomorrow...

Managed to reduce a lot of branches down to chippings this morning - and am very impressed with the machine! It will cope with wood up to 8" diameter, although anything over about 4" will go for firewood.

It would probably be an efficient way of disposing of a body too, although I didn't put that to the test...

I also managed to repair the CV boot; I had been trying to make up my mind whether a vulcanised rubber patch or Sikaflex would be the best solution. In the end I went for both 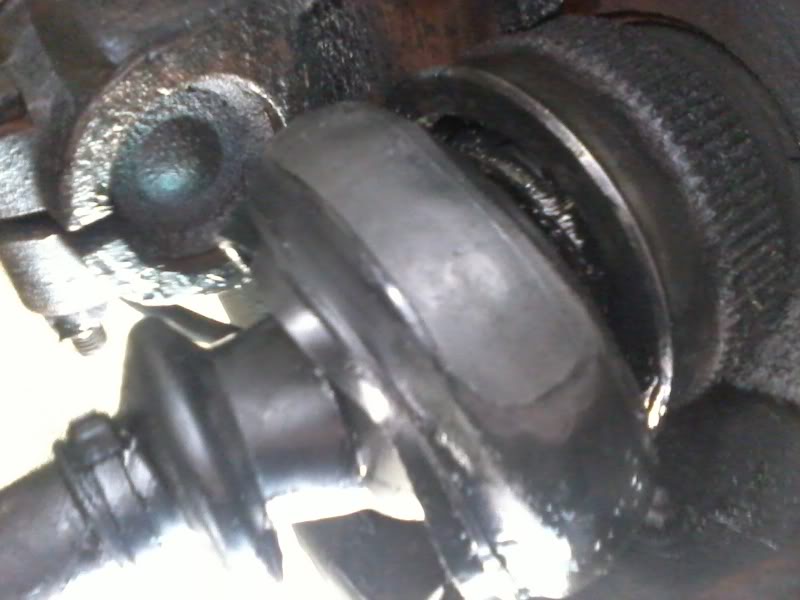 After cleaning with petrol and roughening up I glued a patch on the inside with vulcanising solution, and then applied Sikaflex to the outside. Time will tell whether it will hold!

Yep. That definitely looks like a man who might need to dispose of a body at some point

Funnily enough, you're not the first person to mention banjo players around here!

Done another 100 or so miles since the CV boot repair this morning, and so far so good. Went out for a meal tonight with a friend of Lana's dad, who happened to own a BX about 10 years ago. He kept going on about how it was the best car he'd ever had, and was most surprised/pleased I still had mine!