Yes, 16v calipers too. No increase in ultimate stopping power as that is dependant on disc diameter (=leverage), but a noticeable resistance to fade. In fact, with OE pads I haven't yet managed to get any brake fade, even driving hard down Alpine passes.

Trueing a wheel in our first campsite in the Alps

It was great to be able to ride for a morning, then stop at a mountain restaurant for lunch. Pricey though, so we only did it the once!

Lots of hills - although it was possible to use the ski lifts for some it felt a bit like cheating, plus meant that you were more likely to be on busy trails.

Bridge over a waterfall

View from one of the trails

Lana sprained her ankle, so had to spend some time by the lake recuperating. After one hot day I rode straight into the lake fully clothed, just to cool off. Bliss.

Also did a spot of walking - this mountain was almost deserted

Met up briefly with Todd, who found a great camping spot by a lake (I may have had the odd swim...)

But I was not tempted by this reservoir outfall!

We've always had good experiences eating in France, until now. Went into one restaurant near Troyes, and after waiting half an hour with no menu were rudely asked if we were ready to order!. We did so, and had the table laid by having the cutlery almost thrown at us! I was then charged extra for having a pizza with two toppings omitted, and Lana's steak was poor. So after unsuccessfully trying to make our point, we left and 'appropriate' amount on the table, and departed.

Ironically, after having the worst culinary experience of our lives, the following night we camped next to a McDonalds in Bar-le-Duc and had one of the best! Not in MaccyD's, but in this place:

Now I realise that as someone who has their steak well done, I'm probably not qualified to talk about good food but this was perfect. So juicy (often well done steak is dry, but this was not), with an amazing sauce. Good dessert too - restored our faith in France as a nation of food!

On the way back up we visited Fort Douaumont. Thanks to Phil C for suggesting this back in May, although I didn't get to see it then. Very interesting, and also very sobering to see it and the surrounding cemeteries

On the way back up we stopped near Revin near the Belgian border. Looks a place to return to. Nice walking/cycling...

...and spent the night by a picturesque lake

mat_fenwick wrote:I also noticed that the rear height corrector linkage was missing - must have dropped off in the last couple of hundred miles as that's the last time I changed the suspension height. Raided the one from the silver BX for now, but on the look out for a replacement if anyone has one knocking around?

which bit do you reference mate? the rod from the lever to the rear HC? Or the swivel arm? or the ARB clamped link?
either way, i can sort one out
Smokes lots, because enough's enough already!

It's the swivel arm - must have become detached from the rods (somehow!) and then just unscrewed itself. Unless a BX owning thief helped themselves to it...

Thanks for the offer mate

Apart from a morning's mountain biking, I've spent almost the entire weekend de-rusting the seams on the van. My previous attempt lasted about 3 years before rust started again - no bubbling was evident but once the paint was taken off it was starting again. This time I have a sandblaster gun so I've been able to get deep into the seam. Some were very thin and pinholed, so had to 'stitch' the seams together with MIG welding.

Then painted with Zinga, and sealed with Sikaflex 221. I've not been that impressed with the Tigerseal I've previously used - seems to peel away very easily. Then I'll be painting it like this:

This evening popped the starter off the red BX, to strip and clean the solenoid (intermittent no start). Put everything back on, and was cleaning away my tools when I noticed the solenoid spring lying on top of one of my socket sets

Still, at least I'm getting faster at changing a starter - got it down to 20 minutes now!

Stripped down and freed off the rear brakes on the silver BX tonight - the weather wasn't very kind and and one point the rain was literally cascading off the car (and me!) in sheets. I refitted the rear wheels, together with some new wheeltrims (thanks Todd!), which has made the car look a lot more presentable I reckon.

I've also treated it to a set of new tyres, as the ones on it were extremely cracked. Still needs a handbrake cable, front to rear fuel pipes and some front drop links, then time for an MOT.

Great stuff. Very happy that this one is living again. Common sense says I should still buy yours and bin mine. It'd almost certainly make more financial sense!
www.classichub.wordpress.com
Top

Ah, but we don't do things just because they make financial sense! It made me strangely pleased to hear you were keeping yours. It would probably be sensible for me to keep the (lower mileage) silver one and sell the red one, but I've got kind of attached to it after coming up to 120k miles.

Less rain tonight, so I did the handbrake cable, bled the brakes and fitted a new drop link. The nearside seemed to have been replaced recently, and had no detectable play so I only changed the offside. Let's hope a Motaquip part is better quality than the one that failed on the red one!

The old drop link was a pain to get off, especially so as the rain started and I couldn't use my angle grinder. Managed it in the end though. Just got to change the front to rear fuel pipes and it'll be ready for an MOT - if I time it right it'll have 13 months ticket!

Perhaps i was lucky with the only droplink that i've ever tried to remove. I was warned that the nut on the top would just merrily spin around, would get stuck on the thread & then the whole thing would spin & the nut won't come off. I just grabbed the shank right at the bottom of the threads (making sure not to touch them as i wasn't sure the droplink was knackered or not) with some molegrips & then the nut continued to wind off & voila, the droplink easily came off & i still had a viable nut & no damage to the droplink. Which turned out to be good as there was nothing wrong with it (only realised after i'd fitted the new one & the ratteling sound was still there

Yeah, that's what I did - still kept slipping though so had to break the nut into two pieces with a nut splitter. Had BT round this morning to fix a line fault, and also got the windscreen removed from the Discovery (it cracked back in March). There's no holes around the aparture, but a bit of rust that needs removing. I hope that grinding back doesn't reveal any pinholes, as it looks quite pitted.

I also replaced the fuel lines of the silver BX with copper ones. Plenty of 8 and 10mm pipe in stock:

so with the driver's side up on ramps I put the new lengths in.

When I came to start it I realised my problem - the fuel level was fairly low, so with one side up on ramps, the pickup pipe was exposed and I couldn't prime the fuel system. Fortunately I had a bit of spare fuel, so filling the tank was enough to get it started.

MULLEY wrote: I just grabbed the shank right at the bottom of the threads (making sure not to touch them as i wasn't sure the droplink was knackered or not) with some molegrips & then the nut continued to wind off & voila, the droplink easily came off & i still had a viable nut & no damage to the droplink.

You appear to have a 'magic' set of mole grips there Matthew, is there nohing you can't undo with them

I don't actually use mole grips all that much nowadays - I bought a set of these about 10 years ago and they seem to work much better. They use the force you apply to loosen the fastener, to dig into the nut or bolt head, so the harder you pull the better they grip. It will even grip something that's completely rounded enough to take my whole body weight (out of curiosity, I put it onto a round bar and could do pull ups on it!) 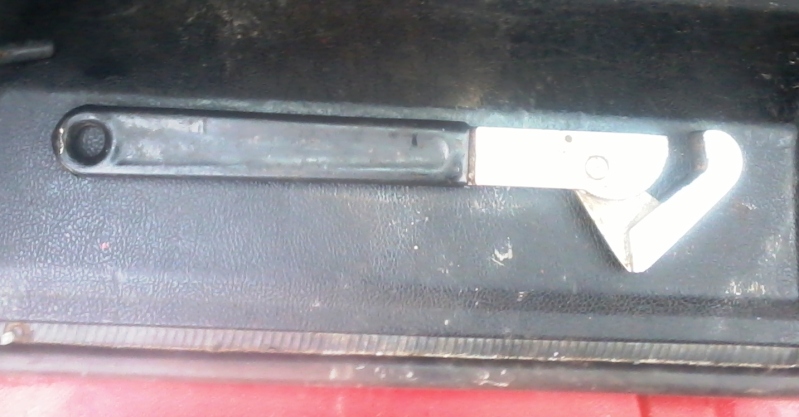 Unfortunately I leant the medium size one out and never got it back, so didn't have one of the right size to do the drop link. I don't actually know the name of the tool, so don't know what to search for to buy another!

I've seen really cheap and cheerful ones around, without the spring loaded jaw - but wouldn't trust them if I'm heaving on it. If the metal is too soft it won't dig in properly and will just slip.

mat_fenwick wrote:I've seen really cheap and cheerful ones around, without the spring loaded jaw - but wouldn't trust them if I'm heaving on it. If the metal is too soft it won't dig in properly and will just slip.

They're rubbish - I got an oil filter remover of this type (cheap, cheerful, no springs) as part of a big box of goodies I bought with axle stands, creeper board, chocks, etc and a lot of additional swearing was required to get the oil filter off, the bloody thing just didn't grip at all. This could be bad workperson blaming tools etc

- dunno if catsinthewelder (who borrowed it) got along better with it.

I do like the look of your decent version, will have to see if I can get some of those.
Diagonally parked in a parallel universe
1991 TZD hatch (Triton Green)
1992 Hurricane
Top

[quote="mat_fenwick" Had BT round this morning to fix a line fault, and also got the windscreen removed from the Discovery ([/quote]

Good service from BT there.