A place for us to show off our cars in all their glory. Please keep picture sizes to about 800x600 pixels.
Messages: 82

If you're jacking up at the roadside, then the BX standard jack is fine... just don't venture under the car, and don't attempt to use more than one side at a time.
this might be a signature
Top

Well, I learn something new. I really didn't know this before. I have a trolley jack but always jacked it from the sill jacking point as per Haynes and yes, it was always when putting the car onto stands that bending occurred. At least I know now, I feel like a right amateur.

Any ideas how to bend back the bent jacking point on the TRD as it's well 'ard and I don't want to further f it up!
Todd

toddao wrote:Well, I learn something new. I really didn't know this before. I have a trolley jack but always jacked it from the sill jacking point as per Haynes and yes, it was always when putting the car onto stands that bending occurred.

I believe the problem is compounded by the the 'reach' of the trolley jack and the surface under the car!

I used to borrow b-in-law's long reach trolley jack and had no problems at all. I then bought my own trolley jack from Halfords which was of a shorter wheelbase and bending of a sill point happened first use. I did straighten it and it happened again

I reckon it happens because the jack wheels have to move freely over the ground surface in order not to exert a sideways force on the jacking point and that the short reach jack's geometry requires it to move further.

I think these BX jacking points are laterally weaker than the force necessary to move the wheels of the jack.

Hi Todd,
I would use a large vice to straighten out the lip. If you don't have a vice, ask your wife...whenever I complain that I don't have a vice (or indeed workshop) she reels off a long list of vices!
If the two flanges of the sill have come apart I would wire brush the gap between them as much as possible, maybe some chemical rust remover if you can't get in there (although getting back to bare metal is best). Then a squirt of anti rust wax (Waxoyl/Dinitrol kind of thing) before you use the vice to close it back up and reshape it. That way the wax will fill the seam and prevent water working its way in.

mat_fenwick wrote:Hi Todd,
I would use a large vice to straighten out the lip.

Best avoid straightening because it's strength is gone (bending is weakening) and you will see it bend back straight away if you do unless you contrive some additional method of reinforcing it.
The jacking point can still be used with it bent over and it does not crumple into the sill itself.

PS: I take it that we are both referring to the front and rear jacking points and not the fitting attachment in the centre for the supplied BX jack.
1991 BX19GTi Auto
Top

OK, point taken but personally I would bend it back anyway to avoid a rust trap, and not use the sill as a jacking point at all (apart from the standard centre attachment).

Thanks for replies fellas.I'll try the vice, just got to lift the car up onto the work bench! Yes it's the front jacking point. I want to bend it back and seal it before it admits the never sleeping rust. I made this mistake on the yellow one and it's now a rusty, pulpy mess ( though I didn't initiate this)

Way2go, that's very interesting about the smaller wheels on the trolley jack. Mine not only has small wheels but the barn has got a recently laid softwood floor and the jack sinks into this. Before I laid that floor though it used to go almost all the was through courtesy of the friendly wood worms that have been having a good old nosh for the last few years!
Todd

Wandered out to work this afternoon and was confronted by this. Oh, damn. 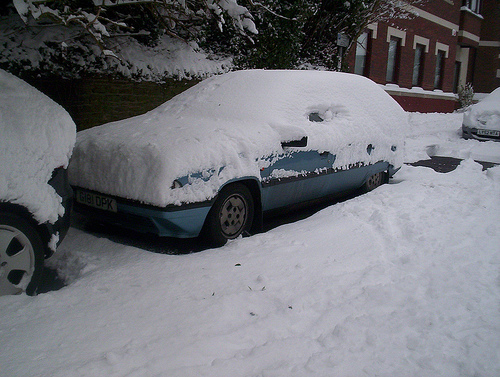 Still had to make an attempt to get to work though. We don't get snow days - I'm an emergency service, me! Of course, that meant attempting to drive along this: 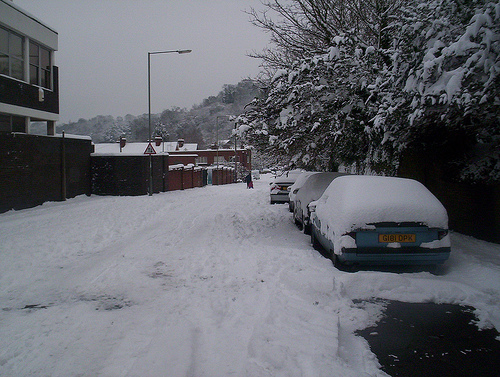 I wasn't the first so thought I should give it a try.

With the snow cleared off the car, most of the journey wasn't too bad. I don't think any of it had been gritted, but the main road part had been mostly cleared by passing traffic so I just took it easy and got there fine. The nice thing about a diesel in these conditions is the way you can just trundle along at idle; I don't think I used the accelerator or brakes the whole way there.

I first hit problems when almost there. The first access road I tried had not been gritted at all. I got a long way up but eventually ground to a halt, not being brave enough to fly up it, and once I'd stopped I couldn't get traction to start up again. 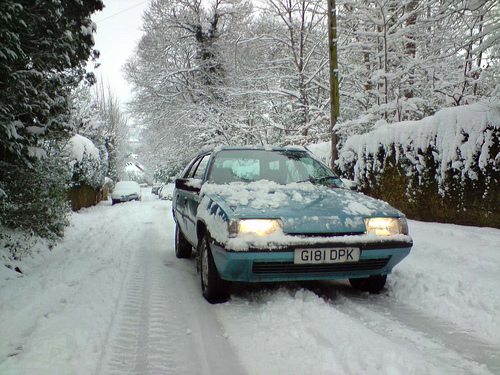 I never managed to get forward traction and ended up reversing all the way back down and out on to the main road to try the other access road into work.

This time I made it! 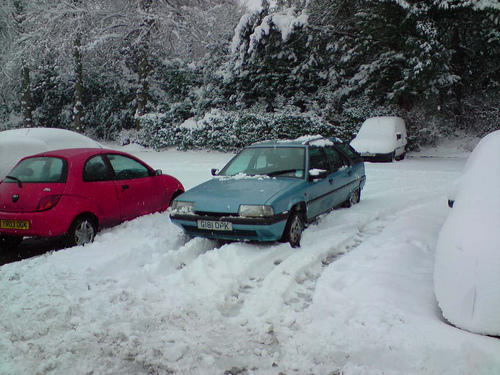 I kinda ground to a halt and abandoned it, but what the hell - I'd made it.

Eight hours later and I needed some help to shift the car off the drift and out of the car park, but after that it was plain sailing. I got home, taking it very easy indeed because of the risk of black ice, and parked up almost exactly where I'd started from. 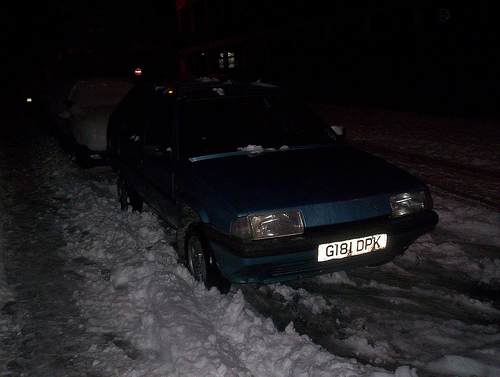 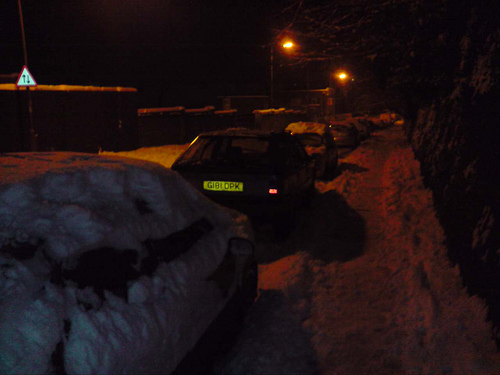 Got it all to go through again tomorrow... at least I know now which access road and which parking is clear! Be proud that one BX has done its bit to Make Surrey Safer

Well done Stu and some good pics there - I can't believe that's the UK!

The news is saying it's the worst snow for 18 years, and it really does seem to be all up and down the country!

Surrey is already pretty safe, yes. I work for Surrey Rozzers, gabbing away into the radio from the Control Room sending officers to vitally important instances of kids throwing snowballs.
Top

We need you in Brizzlw mate.
All night in work we all had nothing but little shits throwing snow balls at our buses.
Needless to say I did my upmost to run the little ferral fuckers over, dont think I got a direct hit though.

"It's only a bit of fun mister"
"yeah well, running over arseholes is my bit of fun, now fuck off"..
and so on..

Do you ever get any lip off the rozzers over the radio?
Some of the banter on the companies radio system can be side splittingly funny sometimes.
Smokes lots, because enough's enough already!

It's tricky. We have to be careful to follow correct radio procedure, but we have a good relationship with the officers and a bit of banter is inevitable. We normally save it for the phone though, when no-one can listen in!
Top

I know what you mean, our radio is on licence, and is monitored, but every so often the controller will forget to let go of the transmit button and come with some crackers!

It's even funnier sat in the radio room listening to the off air banter about various drivers...

I'd love to be a rozzer, only I'd be one of my leftfield oddballs with the obligatory personal / drink problems..

"shut it son"
"we're the sweeney, and we aint had any dinner"
etc etc ad nauseam!
Smokes lots, because enough's enough already!

Here was the scene chez nous on Monday morning: 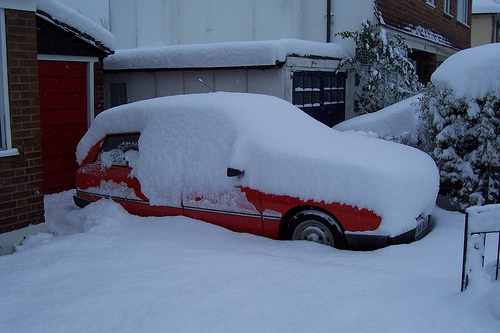 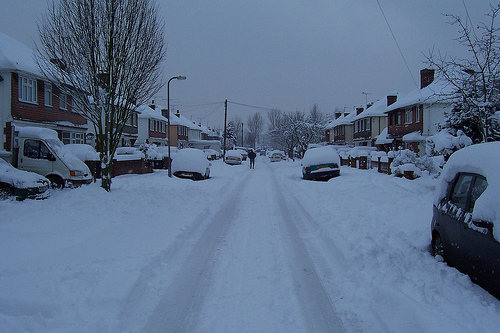 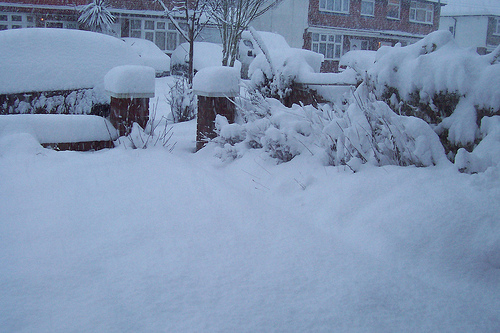 The University was shut Monday and yesterday, so I gingerly made my way to work in the car for the first time this morning. After falling on my arse while walking to the bus stop and waiting 1 hour for the bus that never came

Then finding out that I needn't have bothered because when I phoned University Security, I was told the restriction on my colour parking permit for today had been rescinded this morning. Nice of them to let everyone know!!