The End of Everything

He's good at cleaning ears, note earwax all over his gob

Why I've been quiet..

Ok, so it's probably time I updated this thing a bit.
I've had little to do with BX's of late since last Thursday this arrived: 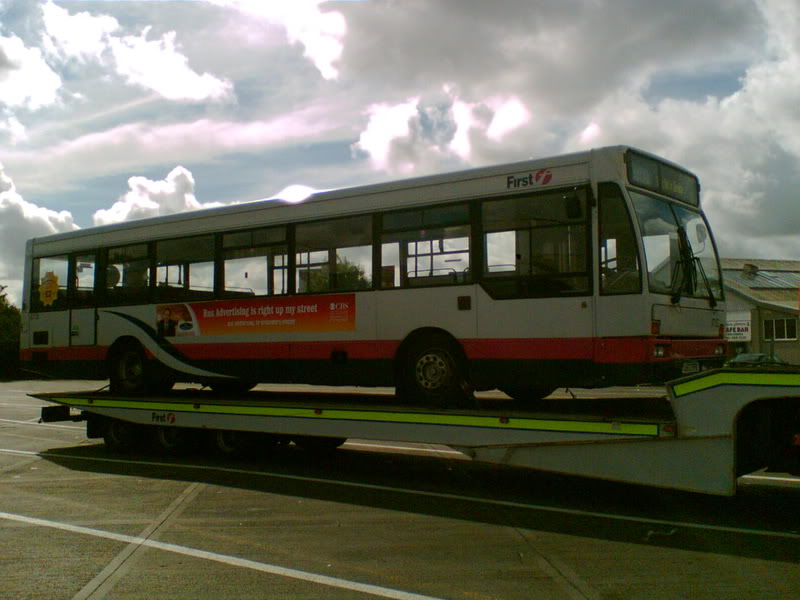 After alot of smoothing of the waters, the engineering director agreed to sell me this Dennis Lance / Plaxton Verde bus circa 1993.

Infact the engineering director has been really helpful and arranged free delivery and a spare engine.
I have to return the wheels and tyres as the tyres are leased, but he is providing a set of rims and I have some tyres sorted.

Within seconds of unloading the old girl off the truck I drove it up to the shed and my very good mate Matthew (who did alot of the leg work in me getting this thing in the first place) set about removing the various adverts and First stickers that adorned the bus: 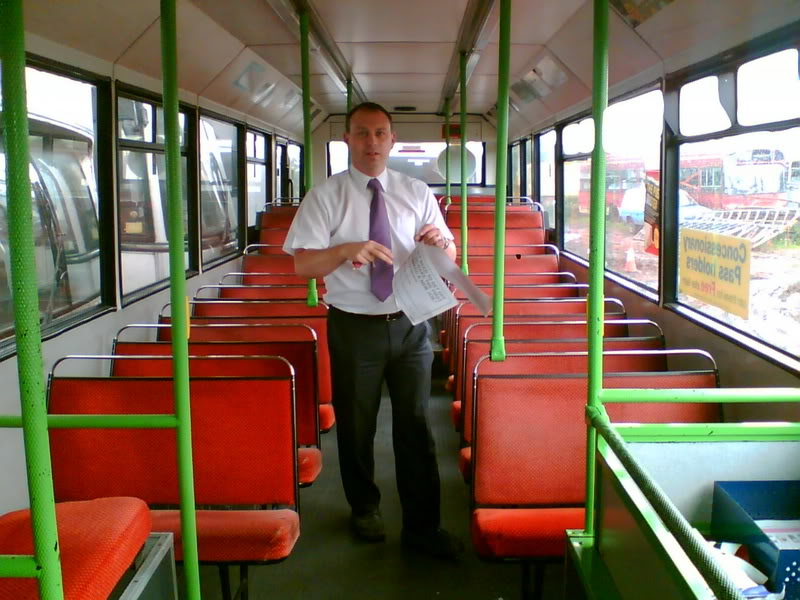 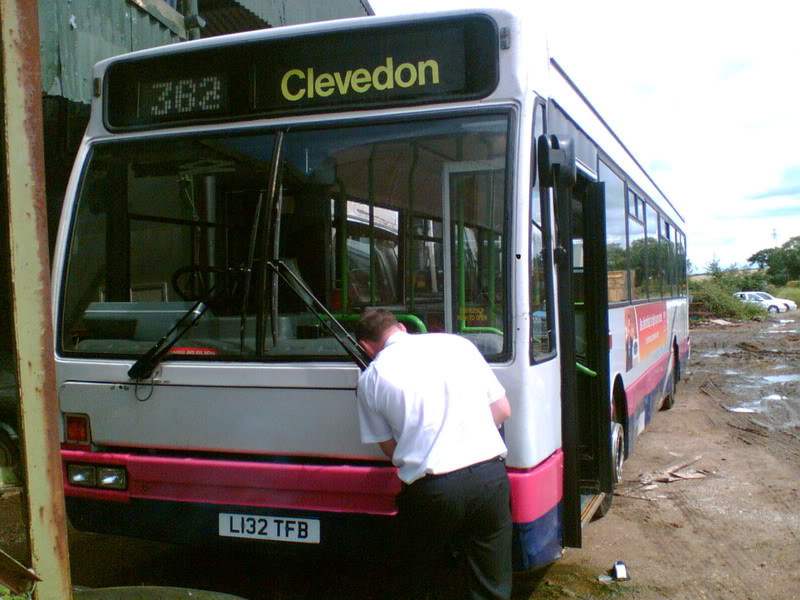 So, Saturday arrives and I set about finding out why it's only running on 5 cylinders and smoking like a northern industrial town in the thirties.
I had been told the engine had dropped a valve, but I didn't think it had. I pretty much thought an injector had blown.. 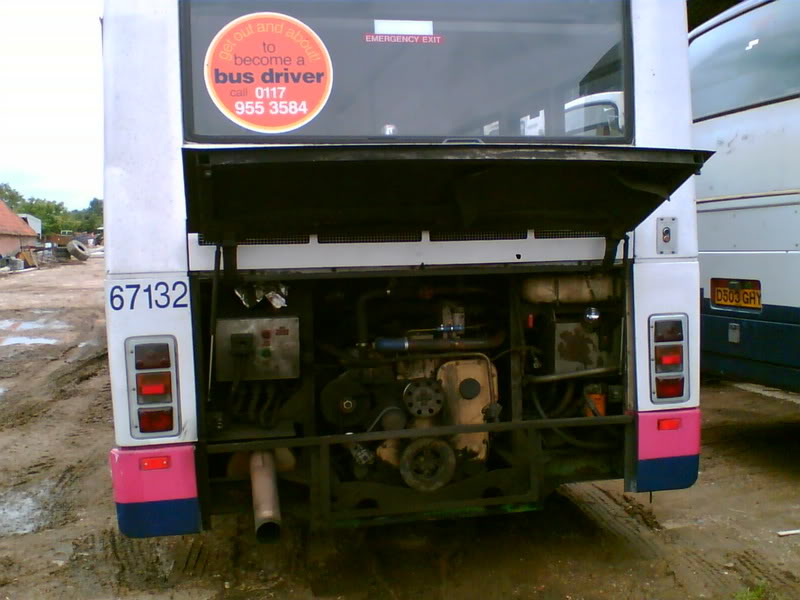 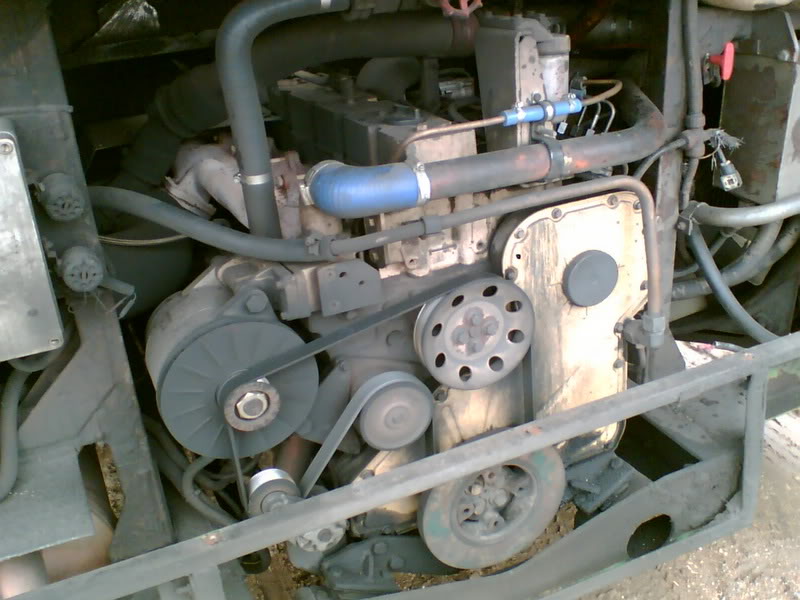 A rather lovely (and original) Cummins C series 8.3 litre direct injection Turbo Intercooled 211BHP engine!
Which is mated to this: 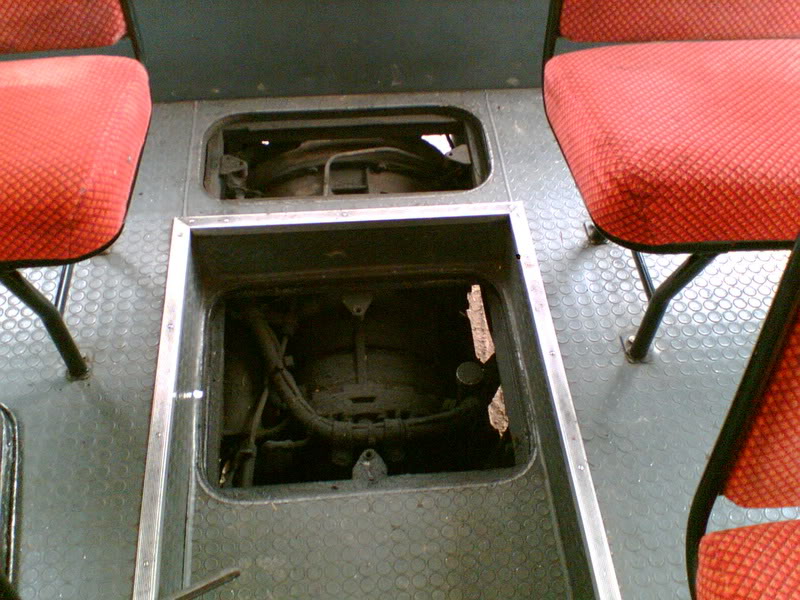 So, I ran the engine up and cracked each injector pipe off in turn, which told me Number 4 cylinder was not firing.
By now I had really convinced myself the injector had failed, but I pulled the rocker lid off (no easy task in itself on these) to check the tappet clearences and just to ensure it actually hadn't dropped a valve.

Once the lid was off the actual problem became apparent: 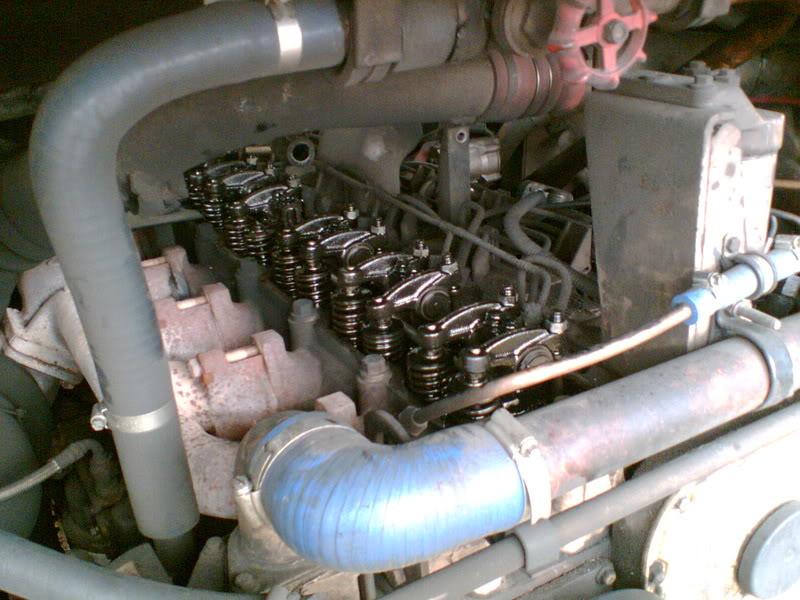 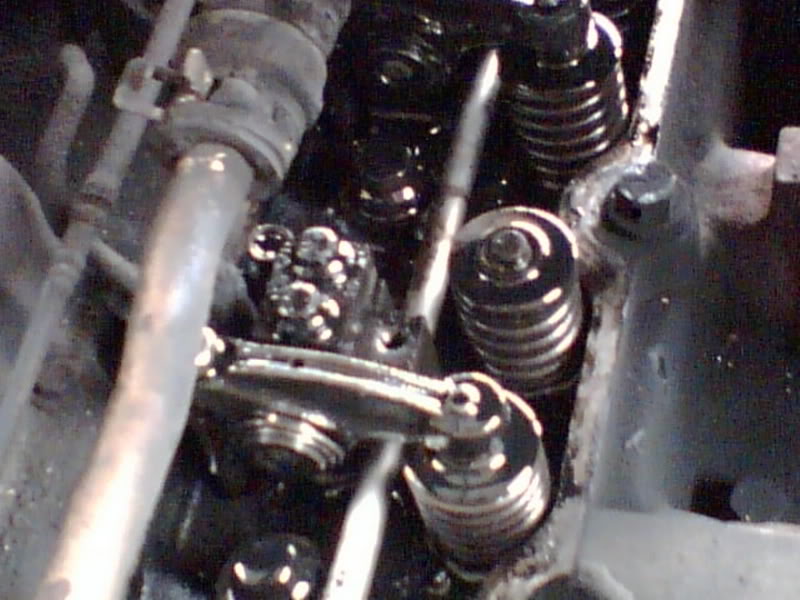 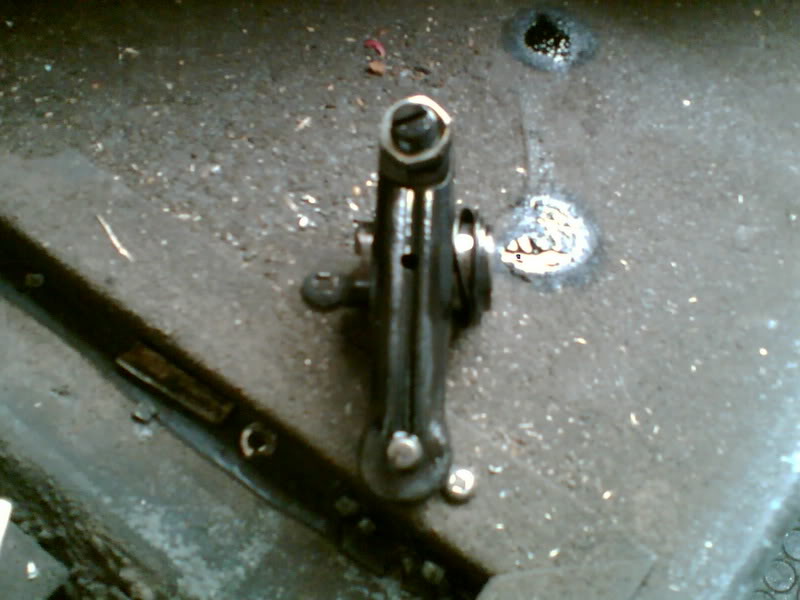 The rocker shaft on number 4 cylinder has failed. The entire inlet rocker was sat on the cylinder head still with the remains of the shaft in it.
Looks like metal fatige and everything else seems fine, so a new shaft will be ordered and fitted this week which should return it to 6 cylinders of diesely greatness!

Since I cant do much else to the engine until I get a new shaft I turned my attention today to the floor and chassis at the back end: 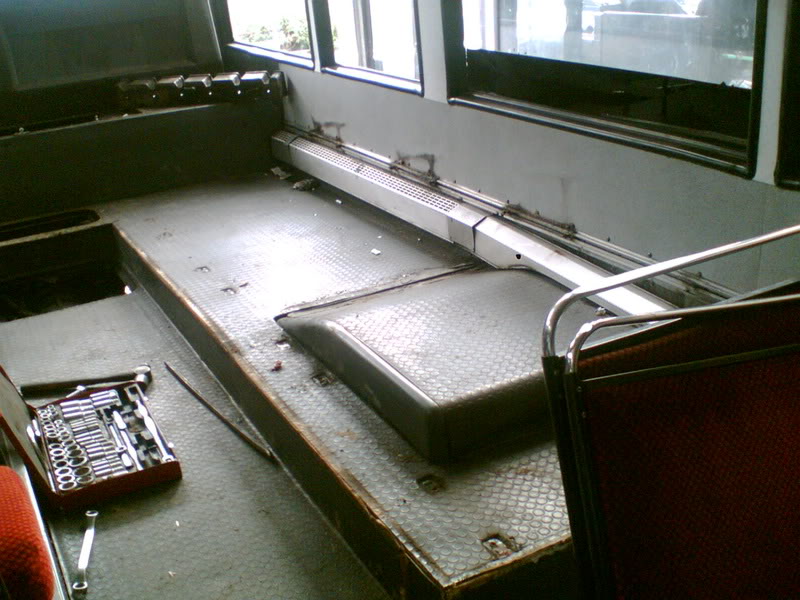 Sadly, like all Verde Lances of this era it's as ripe as a pear: 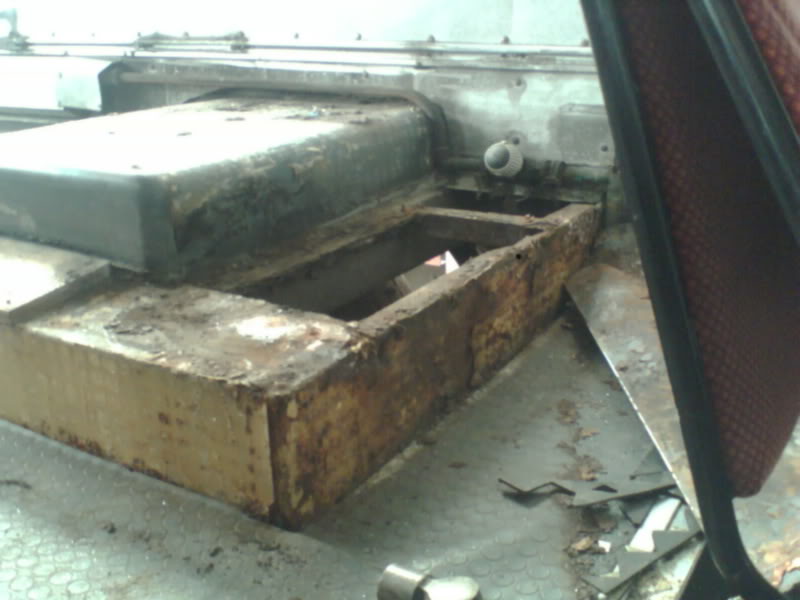 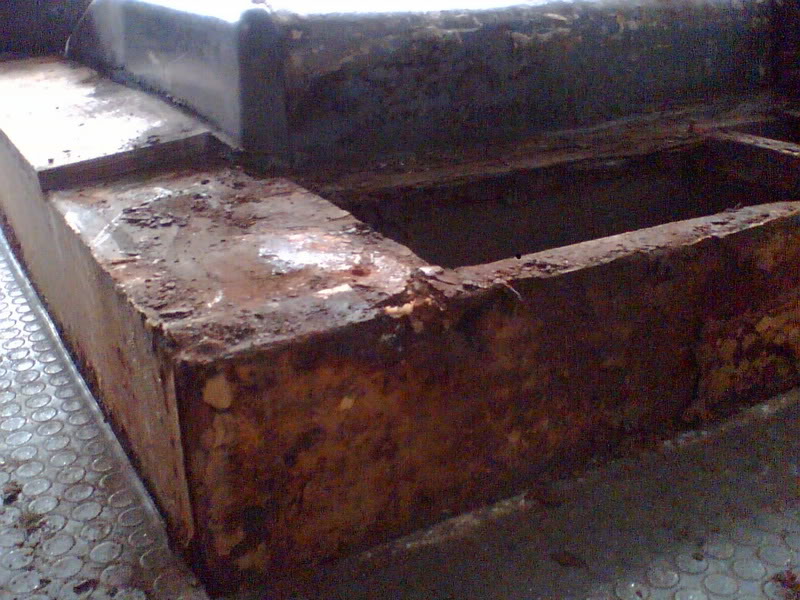 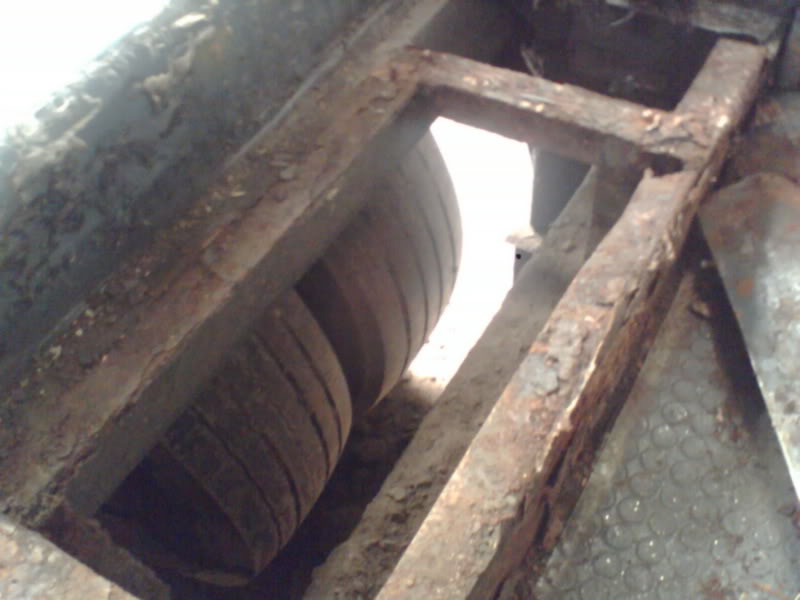 So plenty of sutting and welding to do, but I'm not at all disheartened. All of the fleet are exactley the same or worse, and once I've got to grips with making up new stress panels, floor bearers and repairing bits of chassis here and there it will be better than new.
Smokes lots, because enough's enough already!

Fascinating stuff. Sounds like a project and a half, but should be worth it in the end! What are your plans? Do you intend to restore it as a coach, seats and all, or a maybe even a luxury personal transport, complete with bespoke interior?

Or even start up your own rival bus company?
Jim

Philip Chidlow wrote:What are your plans? Do you intend to restore it as a coach, seats and all, or a maybe even a luxury personal transport, complete with bespoke interior?

Yep, I want to get this to as near "as new" condition as is humanly possible.
132 has always been my favorite bus, infact I drove it the night before the engine failed.
It's just a toy for me really, but I always wanted it, and by the end of this year it will be the only surviving Badgerline Lance anywhere.
Within 5 years it will probably be the only Verde bodied Lance anywhere so it's a little bit of history really.


Sir Jim wrote:Or even start up your own rival bus company?

noooooooo!
Part of the conditions of sale is that it cannot EVER be used for commercial work again. Which is fine by me, by the time I've put several billion hours work into it I dont want shitty members of the public on it anyway!
In all honesty we have enough classic / vintage / rare buses in the fleet to start a bus company, infact there are more buses at the farm than Marlborough street have as an entire depot allocation!
But it's just for fun, and preserving a part of the countries transport past.


The Dude that owns the place! wrote:I'm loving that, will have to pop along and take a look when I get back from hols. When I expect to see it all finished!

I'm rather fond of it too! When they work properly they are really exceptionally good fun to drive!
It's gona take me a while to get this thing sorted Jon, so I guess you're going on hols for 5 years or so?!

Doc, I think it's a brilliant restoration project

Good to see something a little different being lovingly restored.

But for you, such common sights we take for granted now will be gone forever in a few years and we'll all be poorer for it so good on yer!

What livery are you going to do her in? I guess not the "First" she's in now. Perhaps take her back to her original Badgerline?

So, in a few years will we be reading of your work to restore an Optaire bus?

Shocked at the corrosion though. How many passengers have you lost through holes in the floor?

I'm sure (=I hope) MoT standards have changed over the years, but I vividly remember watching the road going by through the floors of the coaches my primary school used to hire.
Top

It would make an awesome campervan!

Complete with a built in garage for a BX.

Good to see something a little different being lovingly restored.

Thanks dude. It makes no financial sense at all, and really couldn't have come at a worse time, but I just couldn't say no.


CitroJim wrote:What livery are you going to do her in? I guess not the "First" she's in now. Perhaps take her back to her original Badgerline?

It can't go on the road in it's current livery as "Barbie 2" is still a current corporate livery, not that I'd want to leave it in that shit livery anyway. Indeed it will be coach painted wxactley as was when new in rear slant green and yellow Badgerline livery, as and when I can find a piccy somewhere of it in said livery I'll post it up.


CitroJim wrote:So, in a few years will we be reading of your work to restore an Optare bus?

hhmm, not unless someone else is paying me to do it! I'm not a huge fan of Opturd products, they actually made a body for Lances which looked a bit bland, but they didn't rot like Plaxton Verde's...
I think I'll stick with what I've got for rather a long time yet, although I've said this before and something else has come up!
I'd still like a Bedford OB bus, but there's only one left of the type I want, and thats owned by a millionaire who wont sell it under any circumstances..

CitroJim wrote:Shocked at the corrosion though. How many passengers have you lost through holes in the floor?

None yet!
It's actually not as bad as 134 and 121 were. Both of which got scrapped recentley because of the corrosion.
134 was so bad when one of the bodymakers at work was walking up the gangway to the back of the bus the N/S front wheel arch was moving! It got binned the same day.
But there's still quite a number of Lances in the fleet, all the P1 Lances are as bad if not worse, and most of the P2 Lances are almost as bad. And they still ply the streets everyday with paying punters on. Scary aint it!
Smokes lots, because enough's enough already!

stuart_hedges wrote:I'm sure (=I hope) MoT standards have changed over the years, but I vividly remember watching the road going by through the floors of the coaches my primary school used to hire.

Erm , they aint changed that much mate!
134 (see above) was MoT'd two weeks before it was scrapped, and all that corrosion didn't happen in two weeks, none of the fitters that MoT prepped it noticed and neither did the VOSA examiner

.
Even though I'd been moaning about it for months previous. You actually could look in the mirrors whilst driving along and see the whole side the bus flexing as it went over bumps etc..
Smokes lots, because enough's enough already!

ok, this is an appaling piccy, mainly since I dont have scanner so this is a photo thats been taken of a photo in bad light!
But this is 132 in Badgerline livery in 1999 when she was 6!
By this time Badgerline was actually First Bus so the large Badgers are no longer present on the sides and the now infamous "F in circle" has appeared after the Badgerline name, but the livery is correct.
It will look like this minus the F in circle and with large Badgers on the side (er decals, not like actual Badgers!) 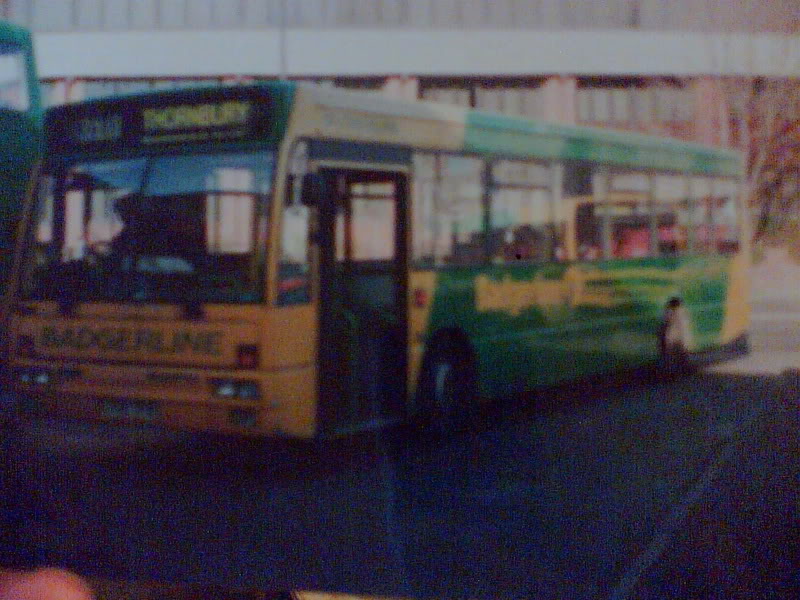 Chris, you're a brave man taking on that! Just out of interest, if you hadn't aquired it, what would its fate have been?
Todd

Meh, it's only rust, it's all fixable!