Thanks, Alex. Maybe if you can make the CCC National 19 July, you can donate then - by buying some junk (sorry, valuable bric-a-brac) from the BXagon Boot Sale!
• 1992 Citroen BX TZD Turbo Hurricane
• 2006 Xsara Picasso 1.6 16v
Top

IMPORTANT UPDATE
After discussions with the Citroen Car Club UK - and after attending a board meeting on Sunday - I am pleased to announce they have put their weight behind the event. So as well as being in association with the BX Club it's also endorsed by the CCC. And this will help with legitimising the BXagon further in the eyes of potential sponsors/supporters. It also, implicitly means Citroen UK are closer to it now than they were. Which might help garner support from dealerships.

As the CCC are affiliated to the Motor Sports Association (MSA) the event will benefit from their insurances re: liability to an extent - and we hope to secure something called a waiver of permit which will help validate further a team's insurance amongst other things. It is still the intention for the event to have legal expenses insurance BTW. I am in touch with the FFSA (the French counterpart) to obtain a Touring Assembly Permit which though not essential will secure the MSA's support and effectively - in the eyes of French law - give us permission to hold the event. (Not that we actually do need permission apparently, but you know how these things work! - if they do not reply it will be taken as approved).

Importantly there will be a disclaimer drafted as a supplement to a team's entry into the event. Nothing to worry about though, just a loophole or two that need closing.

Alan Smith Memorial: Alan is still being remembered in the BXagon Challenge. I have found many people I've spoken to are a bit confused by the association, but once explained fully understood why. It is for this reason - and because of space constraints - reference to the memorial is principally in the promo pack and website, not so much the car graphics. In the latter case it is more associated with the BXC logo. Which is logical really.

Not particularly as part of getting CCC's endorsement, but more because of the MSA's possible stipulation, the request was made that at least one member of a team be a member of the CCC. I wasn't entirely comfortable with this (not just me actually) so I think a good compromise can be worked out, be it short-term membership, or membership of another CCC/MSA recognised body which doesn't involve spending anything on membership!
Watch this space.

What are the other benefits resulting from CCC support?

We can 'advertise' in the Citroenian magazine. Our presence at the National Rally will be 'official' - publicised and announced. The association with the BXC is not an issue - in fact it was suggested that the CCC be more flexible with offshoot clubs such as this, and 2CVGB, etc. We want to build on the status of the BX in the eyes of the CCC membership (in fact support/recognition of the appeal of the BX was quite encouraging in the meeting!). This, combined with Tim's contribution to the Citroenian should be of benefit.

What do the CCC want from us?

They want to see that it is a success. The board were very complimentary of the concept and it's progress thus far. But in their minds it is very much a template for a Classic Citroen Challenge sometime in the future, where DS's, CX's. 2CV'z, Dyanes, Visas, AX's etc. - as well as BX's of course, are welcome.

The new revised plaque - this will be the one produced to stick on participating vehicles. Other supporters who want one will be able to order from me @£6.99 per sticker (profit to BXagon). (They're 450 mm wiide and cut out - not with the grey background BTW...) 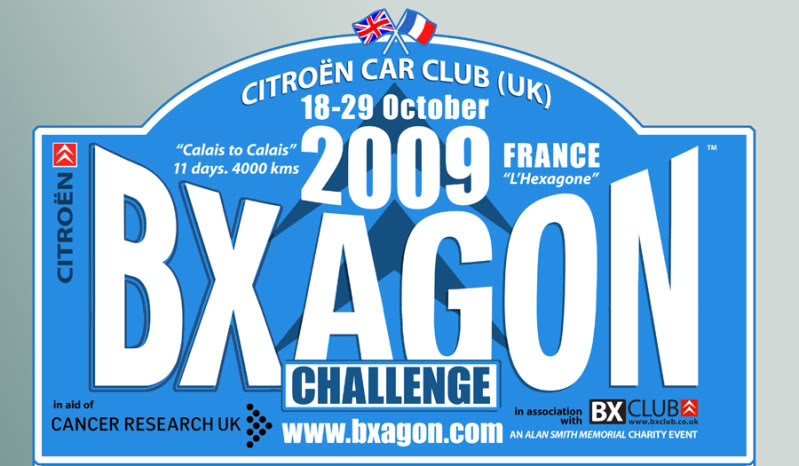 Looks good, great news about CCC aswell. If there's ever another event like this, I will definitely think about hopping on board but unfortunately this time around my age makes it very expensive (insurance) I wish you and all who take part the BEST of luck with it all!

Phil, this plaque is confusing!

After all these months of bulletins, emails etc within the BXC, according to this, it is no longer being organised by the BXC but has been switched to the CCC in prime billing and is their event. It is only now only "in association" with our BXC even though you are stiill at the helm? Does this not smack of switched allegiances?

Also the words "An Alan Smith Memorial Charity Event" makes it sound like that is a cold & established organisation. Would it not be better to use a warmer phrase like "Remembering Alan Smith 19XX - 2009" ?
1991 BX19GTi Auto
Top

There's no switch of allegiance at all, it's just that the CCC are the obvious choice if I want to increase the scope of the event. It has never been as you say "organised by the BXC" more fully - and very kindly - endorsed and supported by Jon and the majority of the membership! As it is it doesn't seem like there'll be more than nine teams particpating from the BXClub and frankly it's not quite enough. I do need to broaden the appeal. Part of this is through the CCC obviously. Although the AlanS line is reduced in size (for practical reasons) on the plaque it's more prominent on the web site(s) see below, where the CCC isn't featured yet. Eventually there will be a CCC link on the main site though. The Promo pack likewise makes it clear that it is dedicated to Alan Smith and I have to say, that element of the event is sacrosanct!

It was always the intention to broaden the appeal of the event with a view to it becoming a template for something open to more than soley BX owners. If in a couple of years time the CCC want to do a 'X'agon Challenge open to all 'classic' Citroens, or whatever, that will be fine by me.

The BX Club is still where my heart lies, and I appreciate the logo's a bit small on the plaque. I'll see what can be done -(but BTW it's always been 'in association with'...). The extensive number of postings, updates and e-mails is all part of the 'organic' growth of the event. I've not done this sort of thing before and maybe there's a flush of over-enthusiasm. Sorry but I am mellower now! All part of the learning curve.

There's no sinister hidden agenda, or undue influence being imposed. Let's not over-analyse... if at the end of the day I get another four or five teams to participate and raise another corresponding lump of money for the charity, I'm not too worried.
• 1992 Citroen BX TZD Turbo Hurricane
• 2006 Xsara Picasso 1.6 16v
Top

I think I'd like to add: The BX Club was (and is) the spawning ground for the concept and I will NEVER lessen the association with this Club. But the event - meaning ultimately, Cancer Research UK, will benefit from it's association with the CCC.

I hope members of this Club will see my association with the CCC as nothing more than practical and actually useful - cetainly in raising the profile of the event and of the BX itself.

Another practical (there we go again) aspect in getting their endorsement will also benefit the BXagon fund-raising at the National Rally, which should raise a fair few quids.
• 1992 Citroen BX TZD Turbo Hurricane
• 2006 Xsara Picasso 1.6 16v
Top

Maybe by you Tim but not everyone is impressed by a "bigger badge".

A large number of us hold the BXC and BXP in higher regard as you should have noted from numerous postings here and there.

Don't know what the fuss is about really. The CCC is more 'recognised'. It's mistaken to gauge a Club's 'recognition' by the (worthy) loyalty and participation of its members.

Of course its membership will hold the Club in high regard, otherwise why be a member? Recent events on the forum have shown it has the potential to be a fragile environment and only the continuing loyalty and support of its membership saw it survive. Long may it continue to do so!

Although the BX Club is a more BX-focussed and with a, dare I say more involved/dedicated membership than the CCC, it is not recognised by Citroen UK. It is not a signed up member of the MSA. It doesn't attract advertising from the likes of Pleiades or Chevronic or various Citroen dealerships and indeed Citroen itself. It can't/doesn't hold rallies. That's not to say that in itself is bad! Just, that from an 'outsider's' viewpoint, it is ultra-specialised and very 'niche' (again nothing wrong with that!).

There's room for all of us in the world of the BX and Citroen in general. In discussions with the board of the CCC it was quite apparent there are many BX-owners out there who choose to be part of the CCC and (even if they have heard of the BXC) have decided to throw their lot in with the 'bigger' club. Their loss I'd say.

I'm a member of both. Nowt wrong with that.

A full-page ad for the BXagon will be running for the next few months in the Citroenian magazine. I am hoping, given the association with the CCC that Citroen UK will find it in their hearts to feature the event in the Citroen Magazine...

So basically, it's all down to broadening the reach of the event in order to raise more money for Cancer Research UK. Bottom line.
• 1992 Citroen BX TZD Turbo Hurricane
• 2006 Xsara Picasso 1.6 16v
Top

Fair enough Phil but who cares whether BXC is 'recognised' by the Citroen UK or MSA (whoever they are)not? It's their loss, not our's and this place won't lose out if they can't be arsed with us.
I still maintain that CCC is an elitist bunch with nothing worthy to offer for £35 a year and BXC and BXP is a far better place to visit.
If the CCC can help out with your event then all well and good.
Vauxhall apologist.
Top

cavmad wrote:BXC and BXP is a far better place to visit.
If the CCC can help out with your event then all well and good.

Maybe by you Tim but not everyone is impressed by a "bigger badge".

A large number of us hold the BXC and BXP in higher regard as you should have noted from numerous postings here and there.

Interesting stuff!
It's well known I'm not a big fan of the CCC, but any publicity is good publicity, so there's nowt to loose.
That said, in terms of a BX only event such as this, the CCC has about 2500 members I believe, now I dont know what percentage of the membership have BX's, but I'd have thought it was fairly low.

So if nothing else at all, this event may have done more for the ranking of the BX as a proer Citroen in the eyes of the CCC than anything that has come before.
Smokes lots, because enough's enough already!

And now we've got Chris Goffey (remember him?!) of Top Gear fame writing about the BX/ BXagon Challenge for the Citroenian - and a foreword for the 2010 Calendar... And he's said he'll support it so we'll be able to quote him on publicity too.
• 1992 Citroen BX TZD Turbo Hurricane
• 2006 Xsara Picasso 1.6 16v
Top
Messages: 351