2013 CCC NATIONAL RALLY, Thank you Everyone!

I don't think Nigel would let even the Queen run things her own way. I don't envy your predicament!


Ive got to know him quite well as of late, he is the most eccentric guy in the world, but his dedication to the marque and the CCC itself is oustanding and he is very kind hearted.

Just trying to get him to "delegate" a little interesting....we shall see If I get a turn on the PA this year as I had the mic taken off me like a naughty school boy in 2011....

Tim Leech wrote:Please note you book your camping space through Wicksteed Park...not me, as some of the FCF people have tried too!

Bit confused here, I thought you said we could just rock up and pay on the gate for camping? Or is that just the show and camping HAS to be pre-booked?
Smokes lots, because enough's enough already!

According to Wicksteed Pk's own website, under the T&C'S camping sub menu, "all camping pitches must be pre-booked using a debit/credit card".

It seems to be the ( camping ) industry standard practice these days Doc.

I suppose campsites get an awful lot of idiots reserving pitches and not turning up, so fair enough.

And Doc, don't worry about being confused, it happens to me almost every day!!

*no firearms are allowed on site*

Bugger, I'd better leave the Gatling gun at home then!!

No firearms? Right that's it, I'm staying home! Wait, what about a tank? Are tanks allowed..
Smokes lots, because enough's enough already!

Doesn't mention tanks, or half tracks. Rommel, you're most welcome!!

Well, home again. I am a terrible photographer, so will let others post those and just write some words. There are some pictures already on the book of faces, which I don't think you have to log in to see (CCC page and BX Club page)

I didn't get there until quite late on Friday night - about 9.30 or so - after a long hot day in the office. There was plenty of space in our little corner of a very large campsite (shower/loo blocks in Leicestershire). Tim had eaten, I cooked some mess or other which Mark and I despatched before we all turned in reasonably early.

I woke up at 6 am on the Saturday to an overcast sky - convinced it would "burn off" I sensibly smothered myself in Factor 50 suncream, but it remained overcast all day - at some points it was even chilly. LOVELY after such a long hot week and probably for the best rather than everyone walking round the campsite looking at shiny metal in blazing sun. Tim and I did first shift on the gate and it was great fun talking to people as they came in and admiring their P&Js, but you can have a bit too much of a good thing: 4 hours and only one cup of tea later I'd really had enough of that. Mark, later joined by Jane, manned the gate whilst Tim, Michael and I shot off into Kettering to entirely fail to find McDonalds and Tesco. Subway and Morrisons proved to be perfectly adequate subsitutes. Fortified by lunch and with BBQ makings in hand we returned to the field of dreams and had a wander round. Great to catch up with old friends and make some new ones throughout the rest of the day. Excellent turnout for the first day of a weekend, I do believe that the Xantias won hands down, which was only right and proper, given their 20th anniversary. One of the nice things about being on the gate was talking to a number of people who weren't club members but loved Citroens so had come to visit and admire (either on foot or in German/Japanese/other tat).

I'm really not a big drinker but after a very tiring day decided that red wine was both deserved and required and lack of same was an issue that could only be resolved by getting into a complete stranger's car (OHAI Dave) and this time, actually finding Tesco (well, he did). BBQ (lovely), erudite comparison of sub-fiver bottles of wine, merriment, mess, and setting fire to things (inevitably) ensued: I'd loaded up the boot of my car with some wood for Mat, which at a couple of points during the next few hours seemed an *alarmingly* bad idea ... Finally made it to bed at 2.30 am to wake up at 5 when it got light.

Despite entire lack of hangover (much envied in some quarters), adamantly refused to face the day on only 3 hours sleep, managed to get a few more in and actually wasn't the first up and about - those honours going to Tim and Mrs Tim. Messed about with concours forms, hijacked Nigel to insist that someone not from the BX Club should really take a turn on the gate now, babysat raffle tickets whilst entirely failing to be of any use whatsoever in responding to punters' questions except for being able to point 'em at where concours entries should go. Wandered round the field with Mrs Tim, made a valiant attempt to sell him a Visa with the admirable aid of a very nice man who let him sit in one and play with the funny switches. Lovely to catch up with more people, vote for concours - some really tough choices to be made there - and generally 'hang out. Some beautiful cars again, good turnout from most marques, RWDs absent but especially lovely to see a Bijou. I think the BXs won the day on turnout today: good to "meet" the black GTI Hurricane and see some other old friends again - A/RBX, "that" gold GT with only 8K miles on the clock, Rob M's elegant blue TRS amongst others. A few late late entries for NEC nominations to be posted tomorrow when I'm a bit less wiped and will get the poll opened this week for voting to be completed by end August.

Helped the Chair count up concours votes: Tim was most embarrassed to have to announce his own car as the winner of the BXs, hopefully he wasn't too crestfallen by Mike's, Mark's and my Pythonesque shouts of "We didn't vote for you" - C1 TBX was truly the people's choice then. Luckily there wasn't a 'shed of the show' category as Timex may have been given a run for its money by a gloriously tatty Xantia.

Packing up and goodbyes are always sad, but the sun came out to cheer us on our way, and (several) final cups of tea later, the weekend was over. Thanks - as always - to Mark for letting us all run in and out of BX Club HQ, using the gas and water, creating washing up and mayhem. Hopefully he'll enjoy having it to himself tonight in peace and quiet as he finally gets a chance to look at his ICCCR book! Thanks to Tim for organising - he did such a great job that he has been nominated to organise next year's National too - I'm hereby confirming my offer of co-ordinating/assisting to co-ordinate volunteers/rotas so that we don't end up with people stood at the gate for too long. Thanks to Jaba for o/s/f wing, Tim for fitting same and Mat for slotting in a relay which will hopefully prevent the car's intermittent starting fault recurring. Thanks to everyone else for what was a smashing weekend - looking forward to the next event

Great to meet everyone and well done to all the stalwarts for who weren't as lightweight as me and did the weekend! Nice to see a reasonable turn-out of BXs. A shame the sun didn't put in an appearance until the drive home... I took a few pics which I'm posting here, but I'm going to let others put up the full monty gallery. 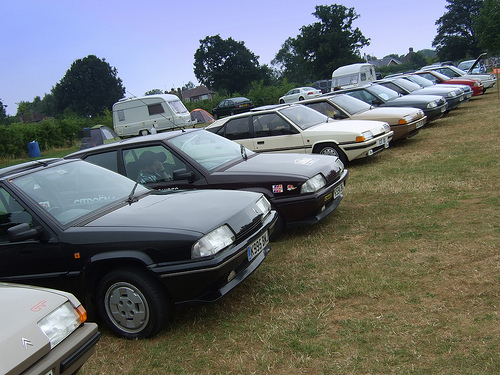 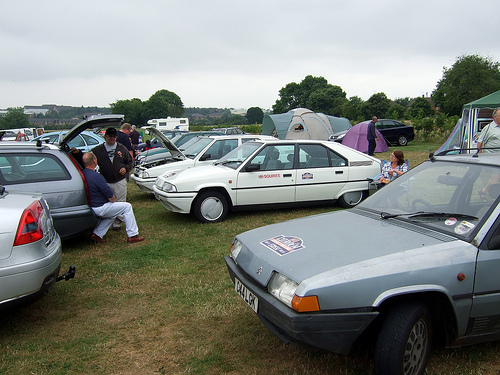 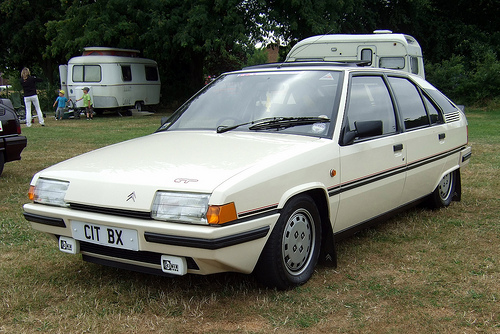 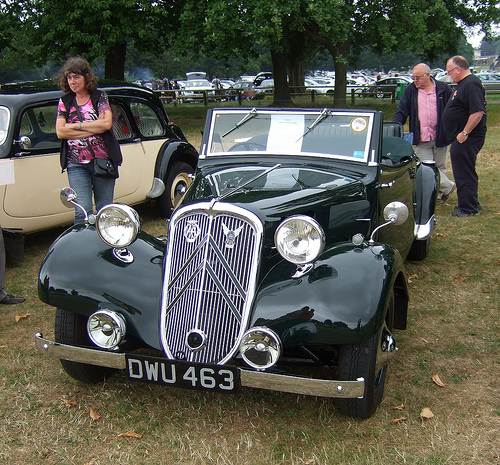 Home, washers on, GT unpacked, the wife's delivered safetly back home and I'm just about awake?

Thanks to you all who attended and of course those that assisted me to make the rally a success!

No new tailblazers, mudflaps or centre armrests on sale....guarantee if Paul296 had come we would have a choice !

As for next year? Well who knows, I need as Sandre pointed out more help on the day as I didn't get chance to inspect the cars or look round Wicksteed either.

On a plus side I managed to get a go on the tannoy to do concours and raffle prizes! Although I could see Nigel out the corner of my eye getting twitchy!
Lots of Motors, mostly semi broken....
Top

You should have just started making facts up Tim, see how much of a twitch you could generate.

"The BX was of course styled by Ronnie Barker, with a choice of engines also shared with the Volvo 340. And look at this lovely DS, complete with bodywork designed to be invisible to radar. The suspension is controlled by the world's first super-computer."
www.classichub.wordpress.com
Top

Caffiend wrote:Well, home again. I am a terrible photographer, so will let others post those and just write some words. There are some pictures already on the book of faces, which I don't think you have to log in to see (CCC page and BX Club page)

Sandre, thats not the case, you do need an account to login to view !

Well that was ever so slightly brilliant - thanks so much to the incredibly dedicated and hard working organisers!

I look forward to getting horribly

in a field with you all again soon. I may even turn up in a BX one day.
Bride of Stinkwheel
http://weaselsemark.carbonmade.com