We'll be there with 'Bleriot', honoured to be able to show him off. Hoping to demonstrate that the BX is a perfect 'daily driver' classic car

Out with 'Alfonse', our blue & yellow 2CV all day on Saturday, but will be on the stand on Sunday so please come along and say 'hello'

-1 I'm afraid. None of you would thank me for passing on norovirus. Yes, I'm pissed off. Sorry to let you down re: stand cover Mike.
Diagonally parked in a parallel universe
1991 TZD hatch (Triton Green)
1992 Hurricane
Top

Eek. Nasty! I've not been well either as it happens so also looking like a non-attendee! Really sorry Mike. Thankfully this show doesn't tent to be quite so chaotically busy as the NEC was - though there should still be a healthy turnout. I'm glad BXC will be represented!

If anyone's going along in a non-helping capacity, I hear there's an Autotest this year. Anyone fancy demonstrating some BX bodyroll?
www.classichub.wordpress.com
Top

I've done an Autotest in my BX...sadly hanicpped where handbrake turns were required. Still managed to coma bout halfway up the board!

I'm a no show for this too - I haven't managed to sort the car out yet. Pretty annoyed about it as I don't like backing out of anything I've said I will do.

What's an autotest Ian? I'm going, manning the stand too but i'm sure I could slip away to show off the BX! Is it just Mike, the owners of the rather lovely sounding RD and myself that's going then?

A question for Mike, which gate do I use? The A37 one (signposted public parking) or the other side, the A371? Do I remember something being said about tickets on the gate too? My number is 07805 041775 if you need to contact me, i'll be at work till around half 10, then will join you, i'm only 10 minutes away which rather convenient!
I'm not a Saint, or a James, but a Tom Saint-James!

Well what a fab weekend! Didn't spend as much time at the show as i'd liked, I was working till half 10 on the saturday, and half 1 today. So got two half days at the show, today less so as it all shut down at half 4 ish, we were all there till gone 6 chatting away and testing each others cars etc. Saturday evening I tagged along to the G section convoy to Glastonbury tor, and then a meal at the pub I had my christmas meal in for work! All organised by Grant (who talks nearly as much as me!), of GS fame, who is more local than me! He has the black with orange stripe GSA Pallas SE that Tim, Paul and Mike spotted on the way down to do work on Tim's TRS estate. Coincidences eh? It was a good fun evening, Kev Sanders let me drive his GSA - which was quite dangerous as i have hankerings for flat 4 waftineess now. The GS has a lovely soft ride, better than a BX, and the flat 4 sounds amazing!

There was quite a lot of interest in the BX stand, Mike's Timex is still plodding along and ever improving, it now has proper MK1 door cards! It looks much the same as was at the NEC. Less a back box that is, and a very comical back box too, nudge it and a small pile of soot would fall out...

Mike had a brilliant idea for a use of it, as i'm sure he'll be along to say!

Met some new, and interesting people, and as always it's nice to see those that I do know. A very good success for a non citroen event, there were even those other cars there, the ones without chevrons! We had a photoshoot at the end of today, these are nearly all the citroens present at the show, there were other modern ones (C6, C5 and a ZX or two) and I saw two CX's in the classic parking (one was a lovely yellow 2.4 carb pallas

) and of course there were two diane's on the 2CV stand.

All in one, had to stand quite far back to get all of them in! 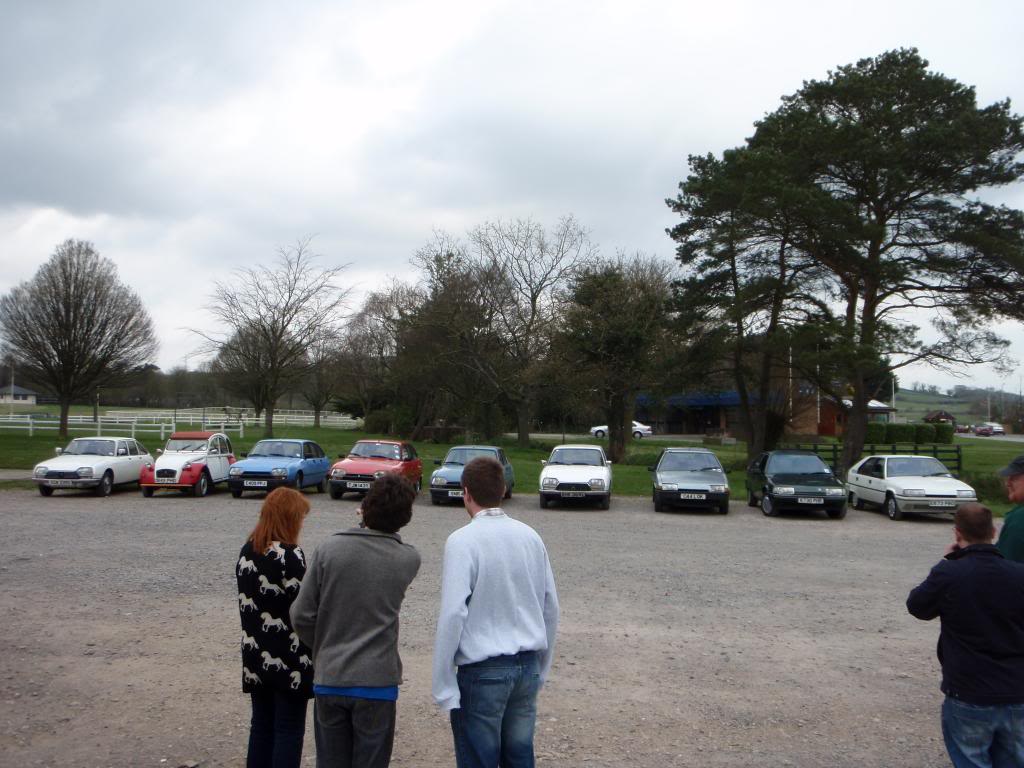 The BX's. The white one is Steve's (username: Alfonse), and it was really rather a nice n/a 17RD. With tailblazer, door handle ket guards, headlamp protectors, mudflaps and a lovely contoured carpet all of which were genuine citroen accessories. I hopped in when we left the stand, on our way to our little photoshoot, and was shocked by quite how quiet the engine was! In comparison my TXD was a clattery noisy thing. 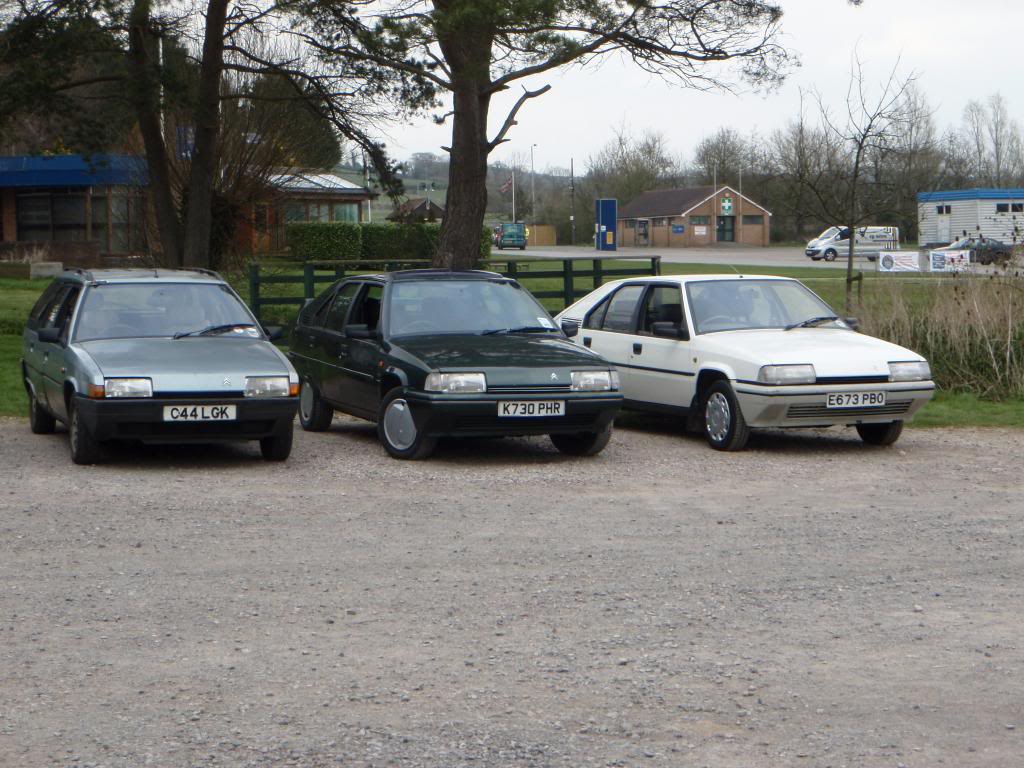 The G's, a 2CV and a romanian equivalent of an Axel, apparently. Quite an odd little thing! Never seen anything quite like it. 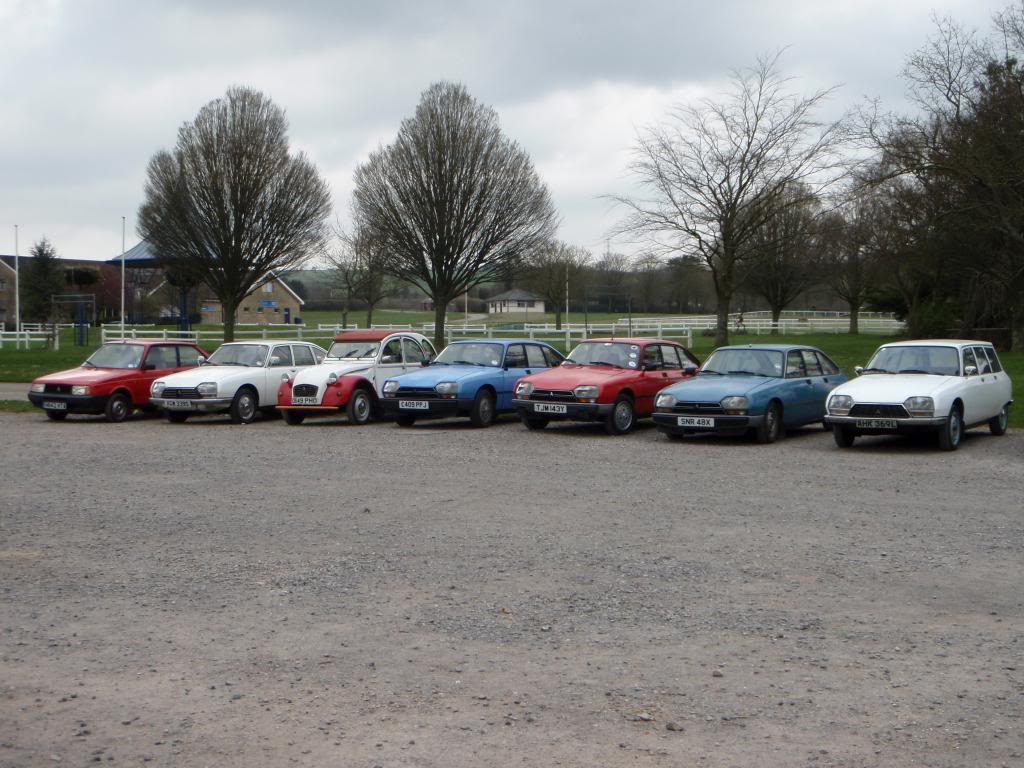 A closer look at Bleriot. 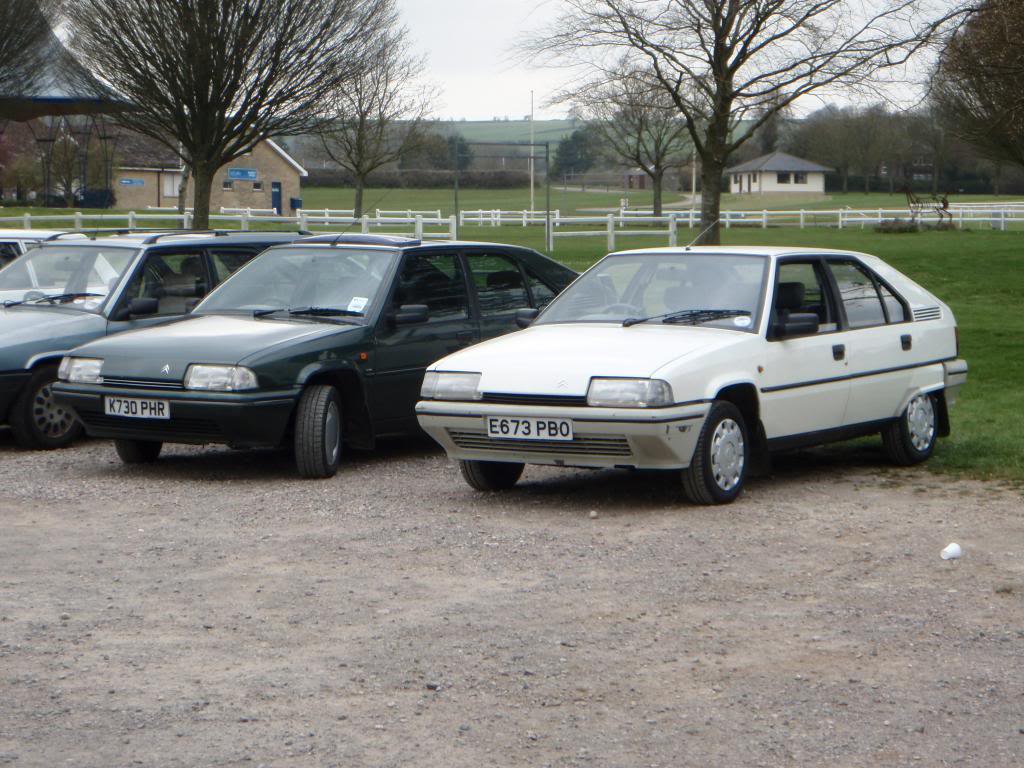 My TXD, and of course, Timex, who sounds quite sporting now with no back box. 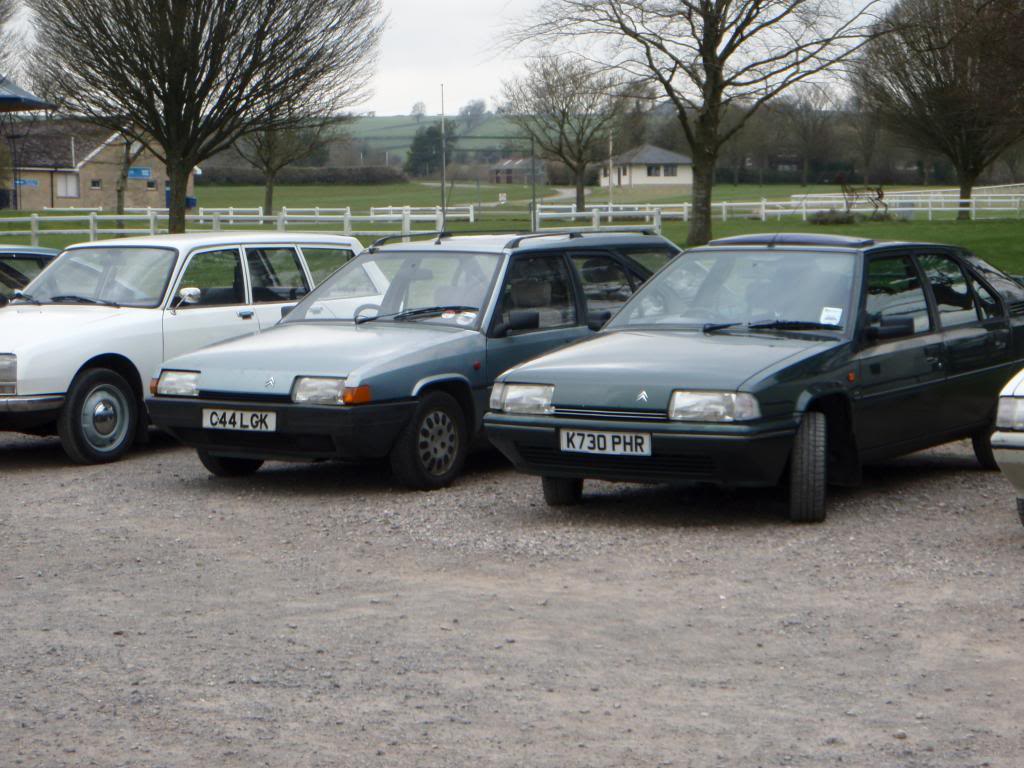 This was to see if I was just imagining that the TXD's back end looks too high, I was right it seems. 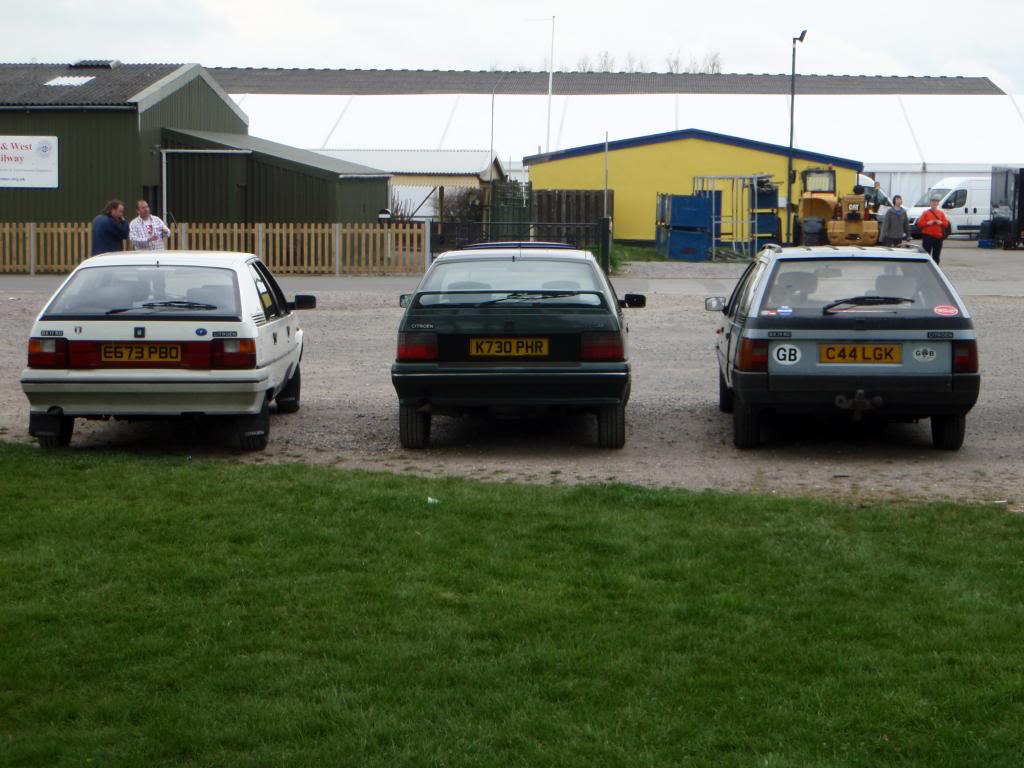 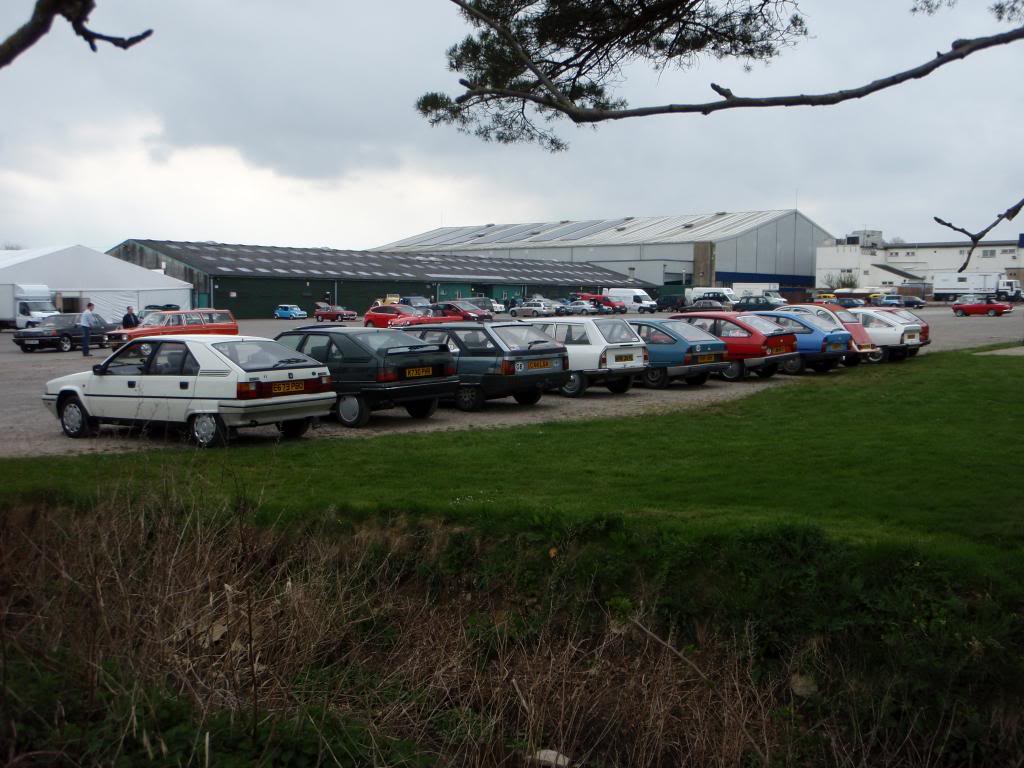 And there we go! Good fun, good people, good cars. Shame about the coldness toward the end of today, Saturday was glorious, as was this morning. But you can't have it all!
I'm not a Saint, or a James, but a Tom Saint-James!

I'd like to say a big thank you to everyone who helped to make this display happen, whether it was by supplying a vehicle, helping on the stand or lending me display material! Our stand backed onto the G section display, which managed to win Best Club Stand, and we ended up socialising with them and educating some of the G owners on the benefits of BX ownership.

As already mentioned, the cars were generally well received, and I was surprised by how many people who had bought a BX as their first Citroen 20 or more years ago were currently running either Xantias or C5's, in many cases saying they regretted moving on from the BX.

I have been given application forms for a couple of future shows - the Restoration show in early November and the next Classic Car Show which is in the middle of June next year. I fancy doing the Restoration show, and if you want to do the Classic show again I'll get the paperwork sorted.
Mike Sims
BX 19RD Estate Mk1 - Timex!
BX 4X4 Estate - Oh god, I've done it again!
BX 17RD MK1 - it called to me!
BX14 TGE, - SOLD
XM Turbo SD,GS Club Estate,Visa 17D Leader,HY Pickup,Dyane Nomad,Dyane 6,2CV AZL,Falcon S,Trabant P50,3x Land Rovers (88" series 1,109" series 2a FFR,series 2a Marshall ambulance),DKW F7, Lambretta LD150 x 1.5,Mobylette SP93,Ural Cossack,Ural M63,CZ 250 Sport,Honda Varadero 125,lots of bicycles & tricycles including (but not only) Sunbeams,Higgins & Bates!
Top

Brilliant effort. Well done to Mike and all those involved. Well done to the G Section too! Prize winning stuff. Great to see them at a show as well. We do need to remind the world that Citroens aren't all DSs or 2CVs...
www.classichub.wordpress.com
Top

Really sorry I never made it, glad a good time was had by all and thanks for pics - lovely line-up. Congrats to the GS crew

, just echoing what others have said really, it was a good day out and well done to the GS' 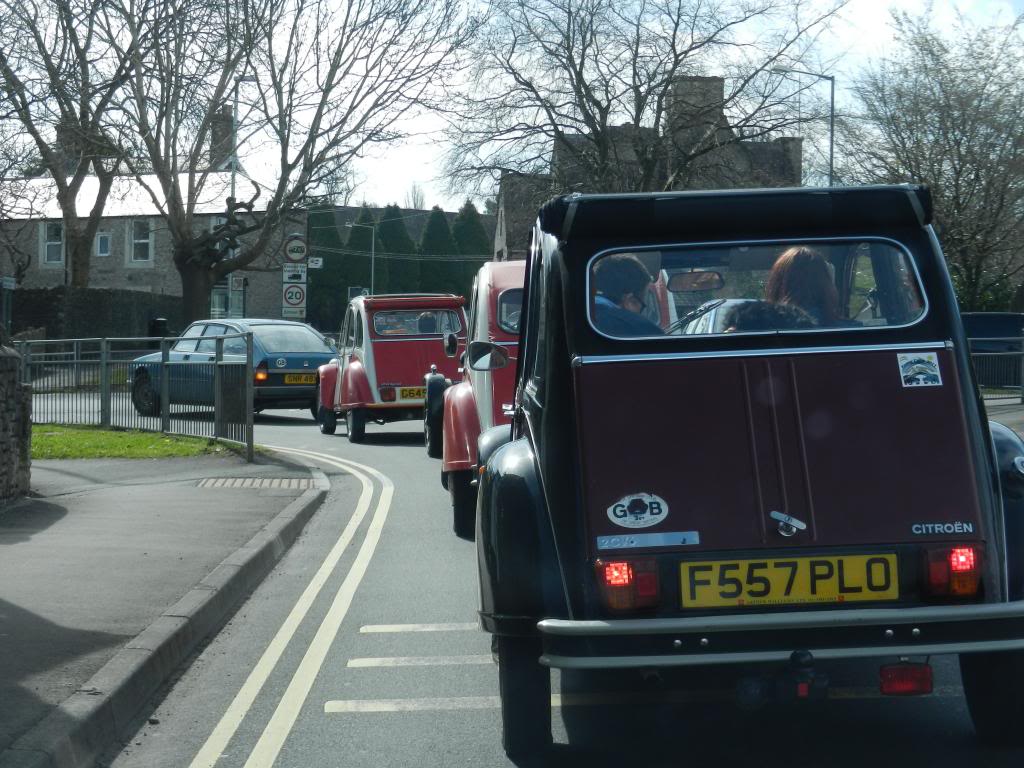 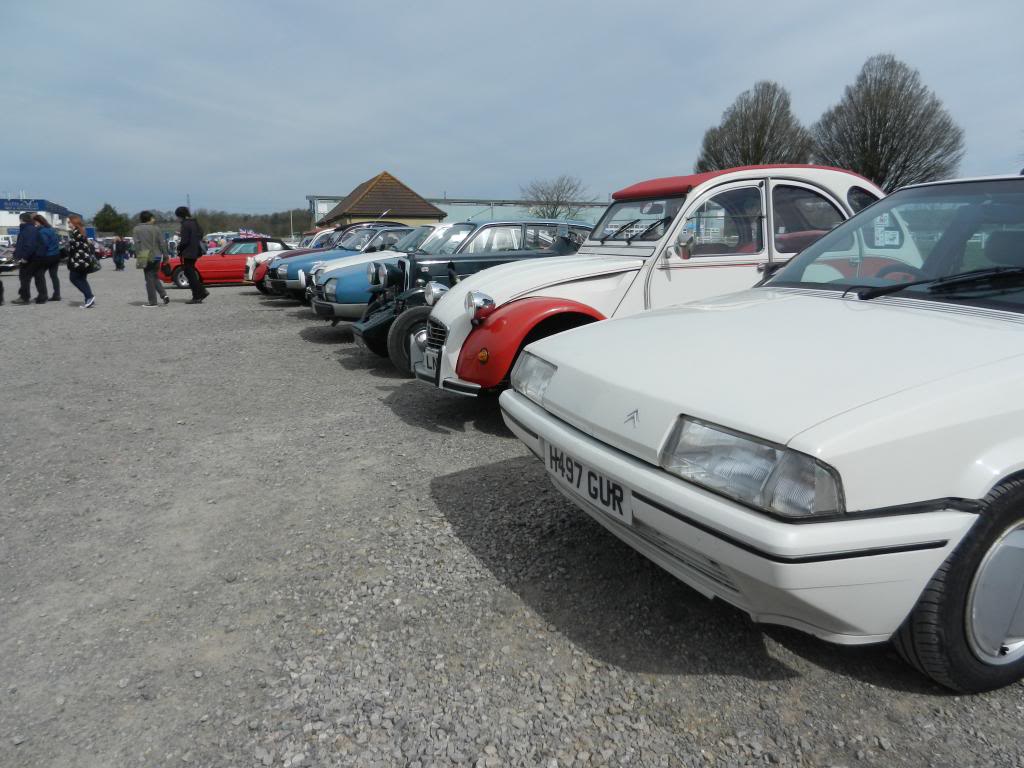 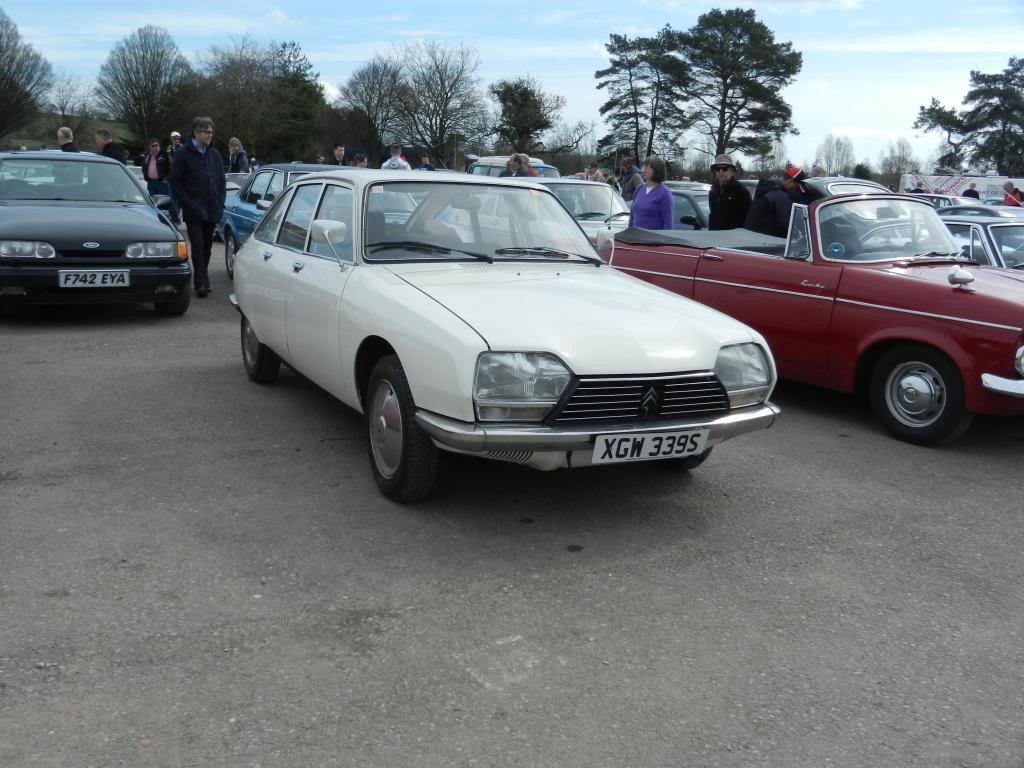 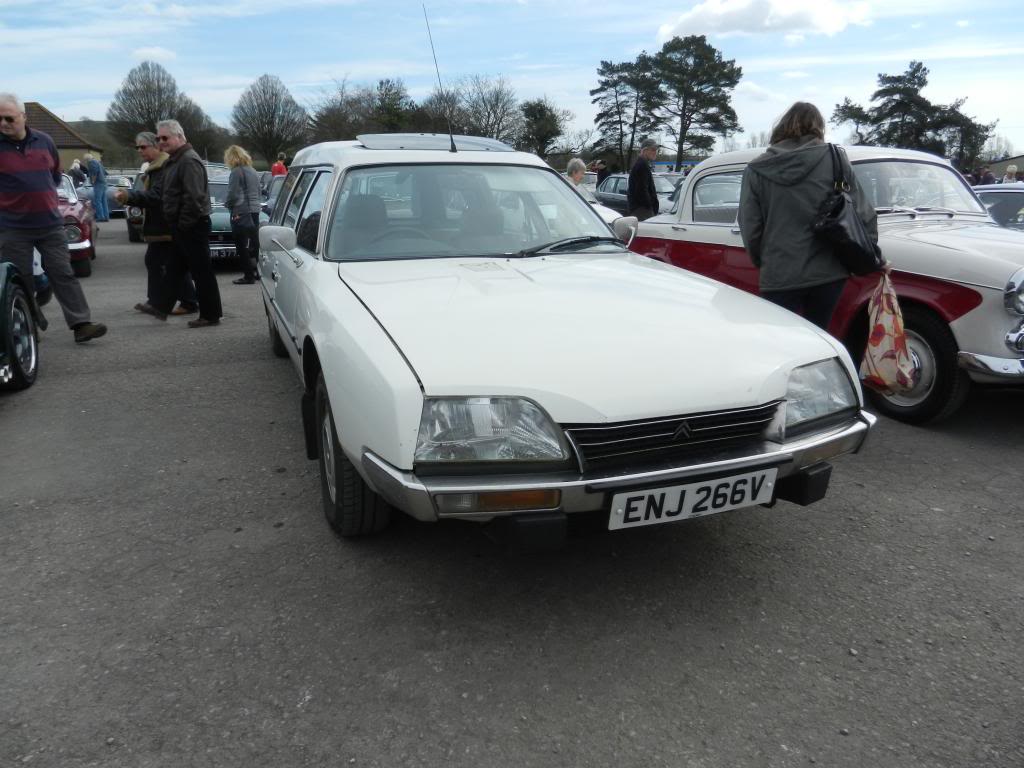 Ashes to Ashes anyone ? 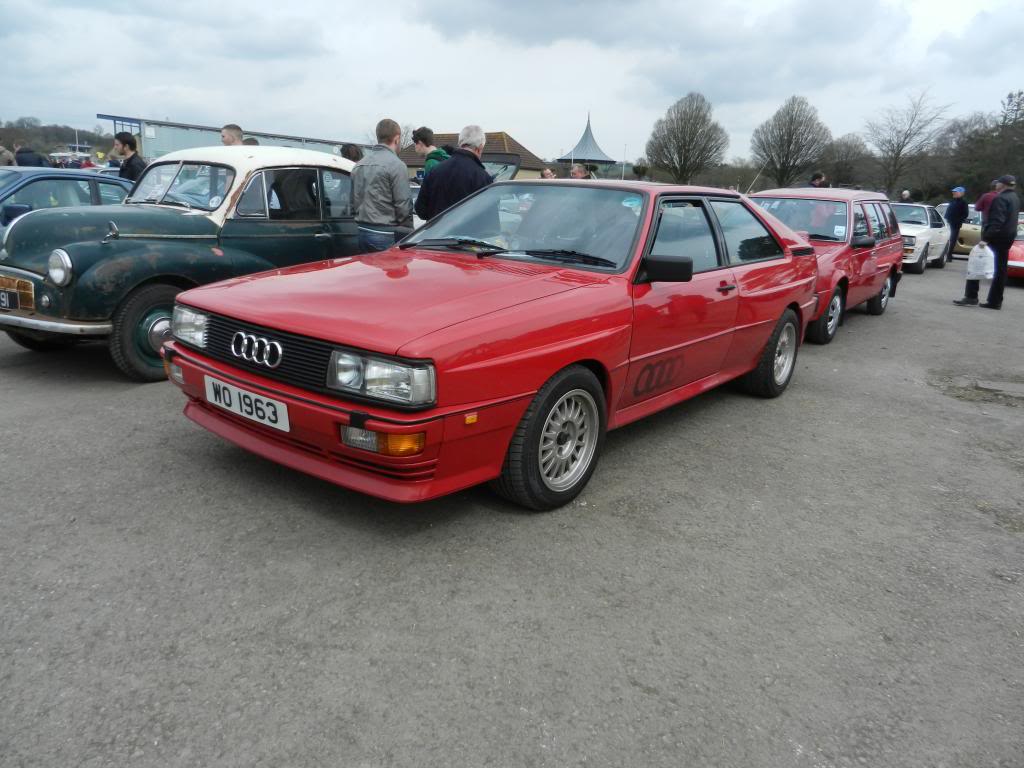 Looks to have been 'a grand day out'.

If I'd known there was a prize for "furthest distance travelled" I would have made more of an effort to get there.

Jesus, has anyone seen the angle of the rear wheel on that e reg BX, its totally fuxxed