Looks like the gearbox breather, which begs the question of where you actually put the oil...

saintjamesy89 wrote:This is the passenger side driveshaft where it enters the gearbox, should this part be exposed?

This is perfectly normal.


saintjamesy89 wrote:Why on earth would you wire a buzzer into the rear light cluster and towbar electrics?

When towing you need some kind of warning to let you know when the trailer indicators flash. Hence either an extra warning light or a buzzer which only lights/sounds when a trailer is connected. A buzzer is easier to fit as it doesn't involve running a wire to the front of the car...

Those blue connectors are the much maligned Scotchlocks, which can cause wiring problems if used in an exposed position. In practice though, they're likely to last for the typical life of the car.

I put the oil in the threaded hole on the RHS in this picture Mat, facing the opposite way to the yellow/cream plastic bit. I took the nut off with a hole in the centre, so assumed that was the oil breather? Oops! where have I put the oil then! I swear the gearchange is much better...

The thing with the buzzer, it would sound when you had more that two electrical bits on, and always with the rear heated screen on. So towing or no, it was having to go! It's amazing how irritating the noise can be. There was a wire that went to the front, but not sure what it was for. All the electrics work still now, so who knows?
I'm not a Saint, or a James, but a Tom Saint-James!

From memory you have put it into the right hole position wise, might have to check mine as I'm doubting myself now! It may be that what I've always assumed is the breather actually isn't

No big bangs with the gearbox so far, it's a bit less noisy and selects gears easier too. Can't tell if it's leaking on the bulkhead side, or if the water leak is running down here and looking like oil as it's gradually cleaning the block! The water leak is getting worse I think, and I cannot see where it's coming from. Water drips onto the starter motor and down the block behind the starter motor, then runs down the block and off the sump, giving the illusion that the sump plug is leaking (it isn't). Looking from above and below I can't see the source, unless it's a black plug/recess in the block itself behind the oil breather/dipstick part. If I had time I was going to remove this and see. But I had a phone call at 8pm saying where are you, you were supposed to finish work at 3

forgot to say i'd be doing car stuff. So I had to finish the sump gasket job and whip home, almost forgot the new oil filter too.

Did the sump gasket today, took a ridiculously long time, just over 3 hours. The longest bit was cleaning off all the gasket residue on the mating surfaces, it was really hard and compacted around the bolt holes, I had to use a screwdriver and plenty of white spirit to get it all off... It had been bodged in the past too, black silicone was [resent around the edges of the gasket. Obviously put some new oil in too, went for the Total brand semi synthetic for turbo diesels which was a mid range price, but apparently decent stuff - it has made a differ3ence to turbo noise, it's more audible now, whether that's good or bad i'm not too fussed - it sounds better! 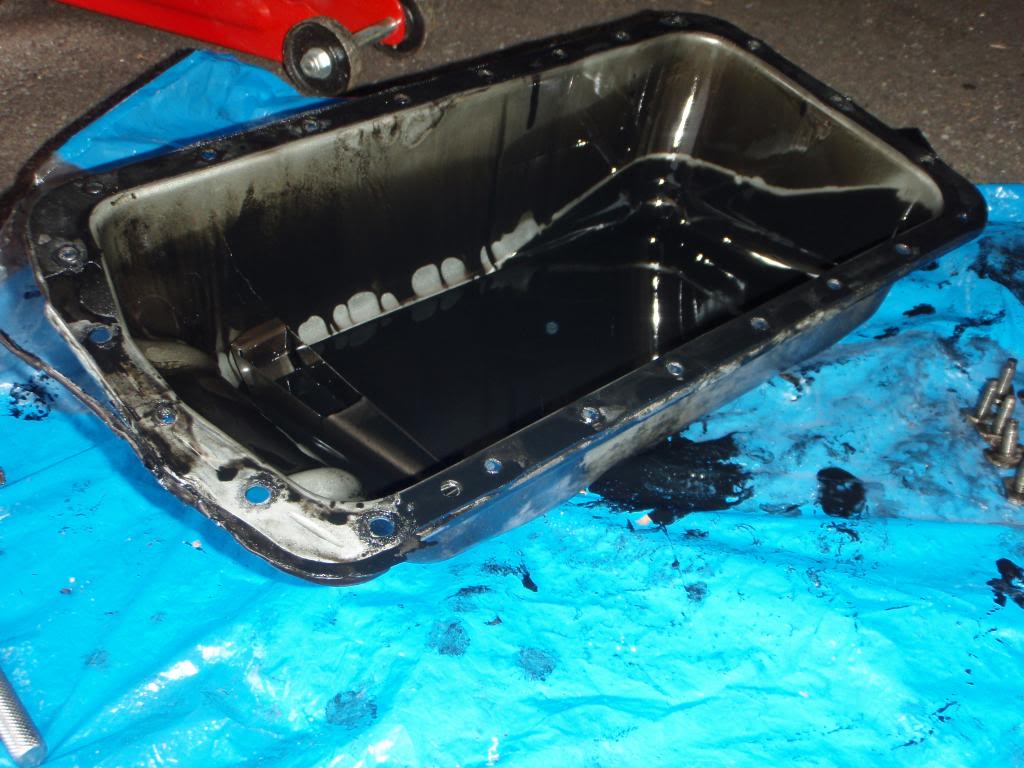 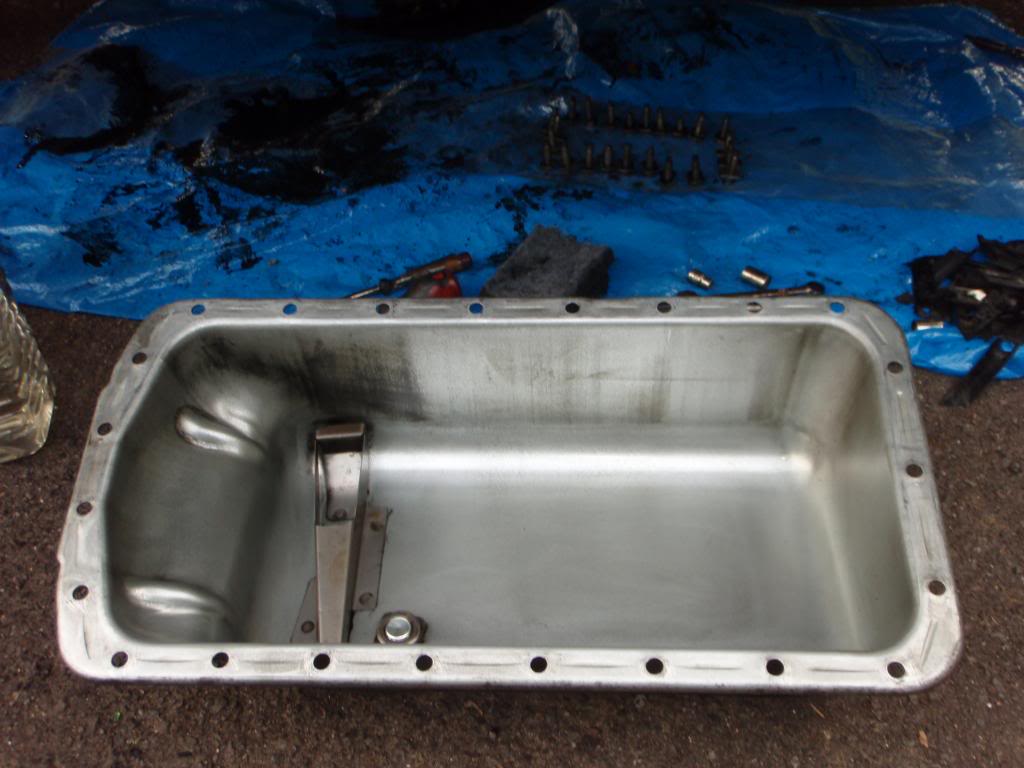 Had to photograph this! The brilliant green flying BX! 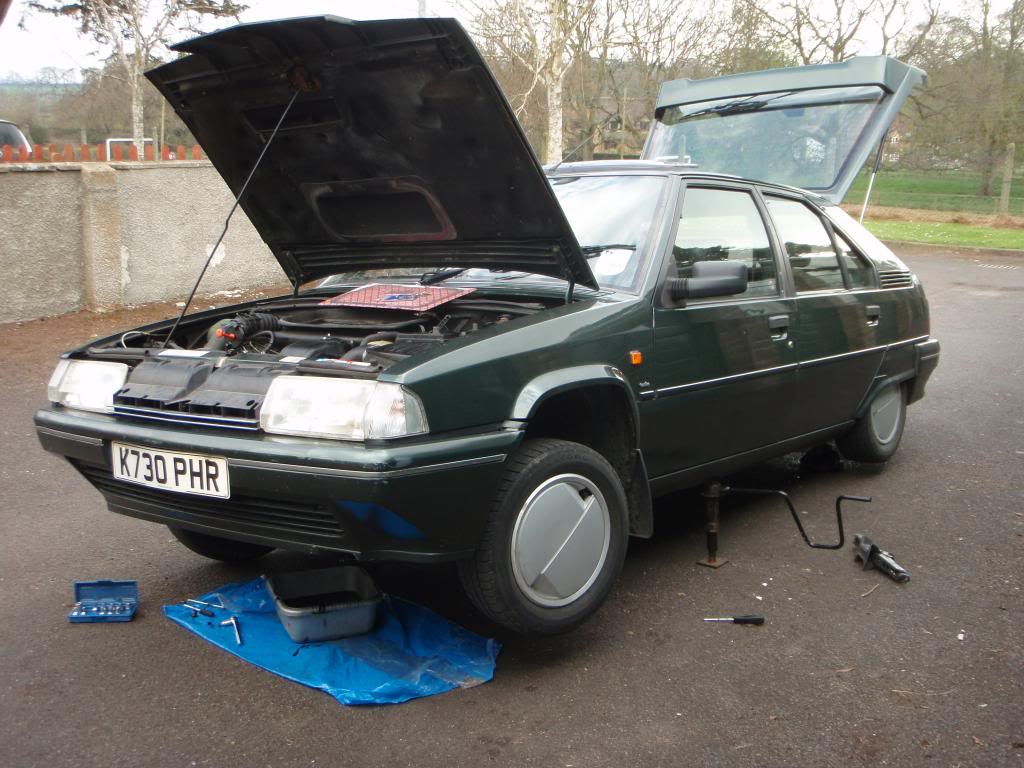 The reasons for the BX having to fly are slightly more sinister though. 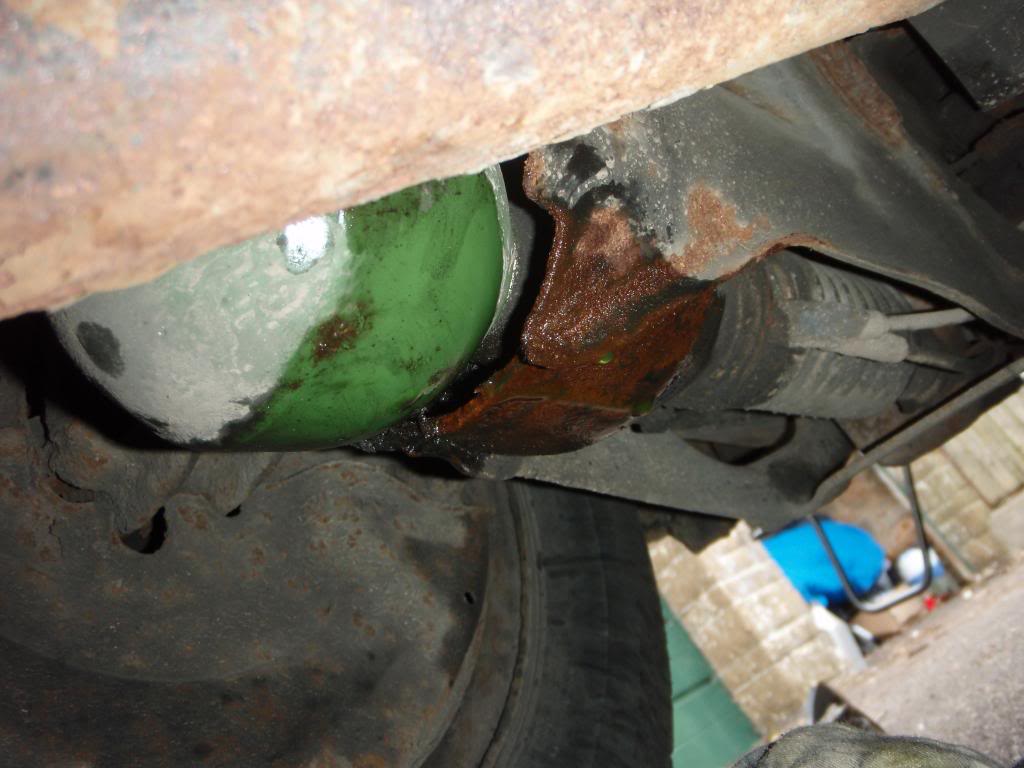 It was quite a leak, and came from inside the sphere 'cup', I could see that it wasn't the sphere seals, but a leak somewhere inside the cup, LHM was filling up in there and leaking over the edge. I jacked this corner up and put the suspension on low, and the leak almost stopped. It wasn't a dribble, it was a drip, but it was 4 drips per second or so. Not sure what could cause this? I planned on taking the sphere off to see what was going on, but I ran out of time. Any ideas on what this could be? It sounds suspiciously like Ian's problem with his TZD estate, a hole in the rear cylinder.

On better news, the spare tyre (on the drivers front corner) is bald, and the inside of the other side in very worn, I did say good news though! I have found a good steel wheel and a matching pair of rear lights (courtesy of rabbercelt, thanks!), now that we have a tenant in our house (at last, hooray!) I can afford to go for 2 new Michelins next month. That is the pinnacle of excitement in my life at the moment, yep.

Next on my mental list is tyre/wheel options for my 2 BX's. I want to go for comfort on the TXD, so thought I might put the GT wheels onto it (175 section avon fuel savers), these tyres came with the GT and are part worn, but good condition. With the GT I want sporting-comfort, and have flirted with the idea of 185's on it (as per the digit of Mr Rugg) as they look quite beefy and sporting on a MK1, and do fit well apparently. So put two new MIchelins on the TXD (185's) and when the GT is running and getting sorted, put the 185 set on it and have the TXD with 175's, which may be more comfy? Need to get the sphere pressure's checked soon in the TXD too.

Ramble out (for now, mwahahahaha)
I'm not a Saint, or a James, but a Tom Saint-James!

It's getting late and I need sleep, but ignore what I said about the gearbox before. I don't know what the white thing is but it's not the breather...

Re: the LHM leak, if it's not spurting out I would be confident it's not the cylinder which has developed a hole.

It was only a fast drip, thanks Mat, that's put my mind to rest a bit! I'll just have to whip the sphere off and look to see what what. Another note, it made a quite audible gurgling noise when I put it in low (whilst leaking), almost like when you pull the plug on a bath, and the water is draining out. Looked this morning, no puddle underneath but that doesn't mean it won't leak when running again...

Fix one leak, find another...
I'm not a Saint, or a James, but a Tom Saint-James!

No more leaks from the rear passenger strut, could it have leaked only because it was jacked up at a funny angle? If the supply/return pipes have holes, could the leaked LHM have collected in the boot and then just tipped out due to the angle? It's odd, but i'm not complaining that it's not leaked since!

I had big plans today and tomorrow, got the two days off as I worked the weekend. I fond the other water leak, it's leaking at the thermostat housing to head face, so I was going to get a new gasket, or failing that I have some DIY gasket (the blue stuff), and I have a new jubilee clip to fix the hose at the bottom of the expansion tank. Other things I wanted to do was to do the other Opera window on the GT, and we have tenants moving in to our (empty for last 6 months) house tomorrow, so I was going to go over and make sure all is well and clean for them.

But what did I do? I was harmlessly washing up, and this happened. 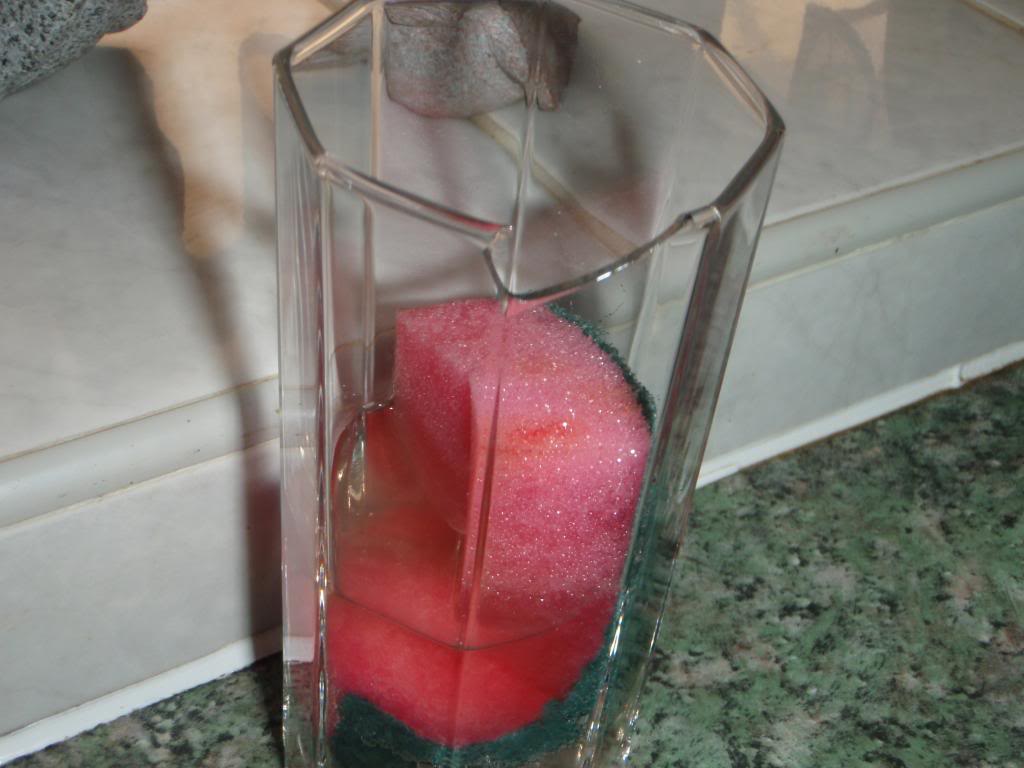 Was trying to get the scourer to the bottom, which involved trying to get my hands inside the glass, I have quite wide knuckles and managed to crack the glass rim and so slice my right hand's index finger right on the knuckle. Didn't damage the joint, but very nearly. Severed a blood vessel, so blood went absolutely everywhere, and wouldn't stop bleeding, the weird thing was it didn't hurt at all. This was about half 6. Got out of hospital around 9, four stitches later. Now i cannot use my right hand for anything that involves finger (any of them) and thumb action, as I can't move the finger joint or put any strain on it. It's infuriating! I can't tie laces, do up/undo buttons, undo/tighten bottles etc. So i'm having to wear tracky bottoms and scabby slip on shoes and try cleaning our house one handed

saintjamesy89 wrote:Now i cannot use my right hand for anything that involves finger (any of them) and thumb action

Damn, that's a real bind. But you'll find that after a week using your left hand feels almost normal...

Seriously though, owww! I winced out loud if you know what I mean!


saintjamesy89 wrote:No more leaks from the rear passenger strut, could it have leaked only because it was jacked up at a funny angle?

Hmmm, it's possible if the piston is damaged at one point along its length, it will only leak into the boot when the damaged area contacts the seal - i.e. at one particular height. See what happens when you raise and lower the car with the engine running?

Weird thing is Mat, it didn't hurt in the slightest (apart from the sutures and stitches). It is a good thing i'm not single though!

I tried that afterwards, up and down with the engine running, no leaks. Did it yesterday too. When it leaked originally it was on high, then I jacked it up, turned the engine off and after a few minutes it stopped. Bit odd! It may be my imagination, but i've always thought that corner was softer than the other side at the back, that could be all sorts of things though, sphere pressure most likely. I keep meaning to get their pressures tested.
I'm not a Saint, or a James, but a Tom Saint-James!

MULLEY wrote:The gurgling noise will be the fuel draining back into the fuel tank & not the lhm.

I disagree. When you put a BX in low, all the LHM returns to the reservoir, so you get a lot of gurgling.
www.classichub.wordpress.com
Top

I've never heard this before Ian, it was quite loud too hence my concern.
I'm not a Saint, or a James, but a Tom Saint-James!

Well, it's perhaps more of a wheeeeesh sort of a noise than a gurgle when you put it in low.
www.classichub.wordpress.com
Top

I know of the wheesh/wooshing noise that's almost a hiss, this was a proper bassy gurgle, again i've not heard it since so out it down to be connected with the leak and it being on a funny position jacked up.
I'm not a Saint, or a James, but a Tom Saint-James!