Philip Chidlow wrote:just before the salt gets put on the roads here (cutting it fine this year!).

Pah! It's positively tropical down there - the first gritting was back in October, and they're been out every night for the last few weeks, despite the temperatures only dropping below freezing on a handful of nights. I think they're being extra cautious ever since a bunch of cyclists were killed a few years back when a car skidded on an untreated road and the council got a lot of stick for it. Fair enough, it was a tragic event but I wish people would learn to drive in accordance with the conditions (and that includes not slowing to 15mph just because they can see a bit of slush on the verges!)

Because it's so tropical down here the yokels don't know how to drive in adverse conditions. I worry when I see people (ladies

), with their faces pressed up against their car windscreens, displaying a visage of abject terror, whilst driving at 10mph across a snow flake.

in my view even more deserving of disdain are the idiots like the one who drove into my BX last January; driving too fast and recklessly for the conditions. Utter prats.

Oh, and by the way, some south-dwellers (assuming they have any driving sense) are well used to driving in snow; they spend their winters in Val d'Isere

Changes on the car front... our venerable BX, having been examined yesterday and assessed as being a 'solid' car with nothing much to worry about at the moment (apart from one or two cosmetic issues) with the fact it has its recent MOT of course, we have decided, after 26 months of ownership, it's staying with us for as long as we can realistically keep it going.

The XM's future is less certain, not because it has any real faults and is a brilliant car, but because although it is big and undeniably luxurious, it's not as practical as the 'bus' we had not so long ago. What's more Liz doesn't drive it.

Having said that I'm certainly keeping it for next year as we are planning some long car journeys during the spring and summer.... but after that - with the Citroen Classic Challenge looming in 2012, it might have to go. But sold on with no immediate replacement sought until after the event. And don't forget I should have my 'Challenge car' sorted in good time too, although it won't hold a candle to the XM let alone an MPV in terms of practicality. But hey.

Anyway, back to the BX: today it became Liz's car; I went to the local DVLA office and transferred it over. What's more Liz has put her personalised number on it. It shall now be B9 EJC... (benign, geddit?)... corny or not, it was a case of use it or lose it... it has already cost her £150 over the years to keep it on retention!

The BX will be receiving a few new bits - including discs, pads, radiator (probably) and a belt change apart from usual stuff in the coming months - AND for the first time since I've had it, a working radio. I just happen to have a pair of new old stock 1989-ish Audioline co-axial 10 oz (I kid thee not) parcel shelf mount speakers... the same as were fitted to my 1989 Toyota Corolla GTi-16...

Is the xm a TD Phil?
Top

No, it's a 2.0CT, manual Exclusive. Lovely car, with electric half leather, nicely working air con and steering wheel controls for the radio cassette and CD changer. Fast and, for a petrol in such a big car, quite frugal on a run. And with its new Michelins holds the road really well. Recently Lexia'd and no faults.

Diesels are desirable but as is often the case, cheaper to buy petrols are often overlooked. They are the more refined in my opinion. 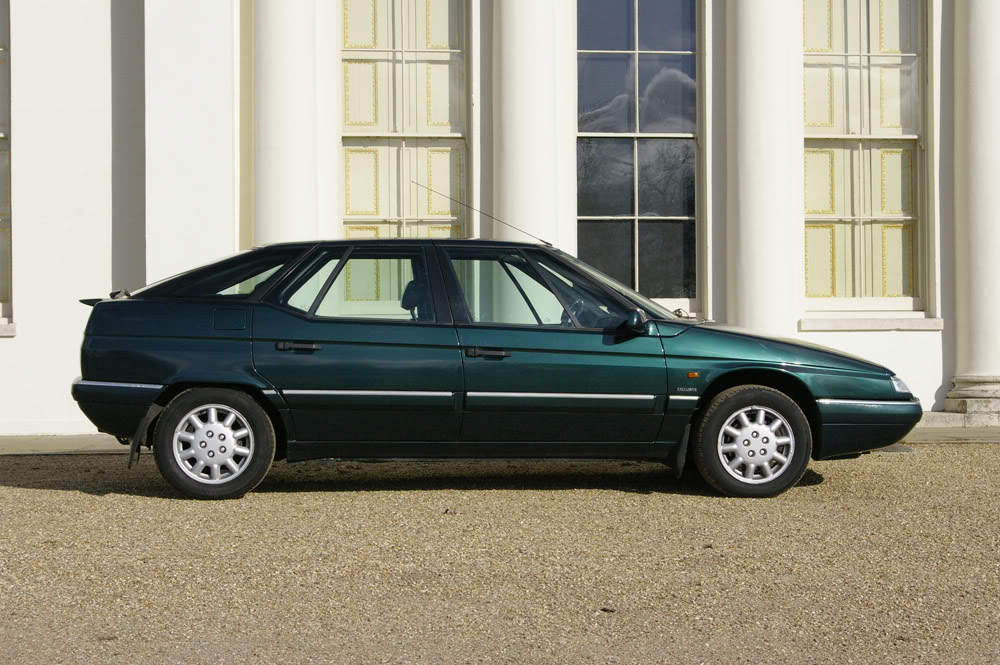 What's the fuel economy like, Phil? I'd be surprised of you get more than 25mpg around town... I do agree, petrols are more refined but, diesels are more economical and more trustworthy

I always end up resenting cars that do under 30mpg. I'm tight I guess.

It's a real beauty, I'm sure it'll be snapped up should you decide to sell.
Top

You're right, I get about 20-25 mpg urban and around 33-35 mpg on runs (best was 37 mpg for a 217 mile drive to my parent's). After resetting the computer I decided to see what a single day doing short local trips ended up being: 16.8 mpg. So it's not really used for very short trips/nipping down to the supermarket! However, at the pump, it seemed I'd managed a bit better than that, so the computer might not be quite as accurate as I thought?

Yes - I'm struggling to hit 40mpg in the tzd around town

I have done a couple of tows though, so possibly not a fair appraisal. I would have to put a brick under the accelerator to get more economy.

My driving style in the tzd is entirely different to the 19 n/a. Trying to keep in the turbo range means changing gear a lot later than I would in the 19, and the tzd is pathetic in comparison, until the turbo comes in that is

There's no point in comparing petrols and diesels on economy - ever, but in my opinion petrol cars are a better drive - except when filling up. Just depends on personal taste

We are all driving around in old cars with relatively very little intrinsic worth, so the cost of running them - as a proportion of the cost - is significant. But seeing as none of us really have to factor in cost of finance, depreciation, and so on that is associated with 'modern' car ownership, even us petrol car drivers are doing OK.
• 1992 Citroen BX TZD Turbo Hurricane
• 2006 Xsara Picasso 1.6 16v
Top

I much prefer the low down torque of a diesel, I find them a far better drive than a petrol but I'm no speed freak either although I do like my weekend spins in the TZD after a week of sedate commuting in my TGD Auto which I also thouroughly enjoy as I find it very stress free driving. It eliminates all levels of road rage

As I always say, there's no right choice. Just the one that suits.

Philip Chidlow wrote: in my opinion petrol cars are a better drive - except when filling up. Just depends on personal taste

Got to agree with that Phil, I like my cars to be responsive and lively. Especially when you need to overtake on smaller roads, with the GTi you can get it done quicker and therefore safer even when being held back by a "plodder" which usually then requires a fast ramp up of speed.

I totally agree. Trying to overtake at lower speeds in the TZD requires very careful timing to get the Revs right. When I first got it I embarrassed myself a couple of times whacking my foot down and.... nothing

I would really like a diesel auto - I've got an eye out for one in fact.

I believe my 14 driven sensibly is not far off the economy of the tzd around town. From a standing start it's not a great deal slower either, because the power range is much wider I guess?
Top

Oh no, not another road trip!?!

Well this one's slightly different in that it's a plan for our family's 2011 main summer holiday... Thought I'd share it with fellow touring-fans (and also put out an appeal for any knowledge of the Spanish section: I only know a bit of the Barcelona area - as for the rest of the 'section' I don't know anything except a few pointers from Wikipee'.

With the intention to get a fair distance in the first three days, we drive down on an early Monday morning to cross at Dover (90 mi), then (Day one; 200mi) it's off from CALAIS to around CHATEAU-THIERRY (E of Paris). Day two; onwards to MOULINS - that's another 232mi. Day three, it's off to RODEZ (210 mi). Day four/five*; cross the Sky-bridge at Millau and on to *TWO nights in or near AGDE/NARBONNE-PLAGE (125 mi). Day six (187 mi); lunch in Perpignan and on to a villa W of Barcelona, Spain (area of MANRESA) booked for one week from Saturday to Saturday, taking us to; Day twelve/thirteen*; on to ZARAGOZA (165 mi) - spend *TWO nights there - so; Day fourteen; cross the Pyrenees to PAU via Jaca (there is a plan to do Bilbao instead... but for now Pau is favoured), that's 160 mi. Day fifteen/sixteen*; Pau to BISSCAROSSE/ARCACHON (160 mi), *TWO nights there. Then it's a couple of longer-distance drives; Day seventeen; on to TOURS (248 mi), Day eighteen; continue to AMIENS (232 mi), then Day nineteen; on to CALAIS (99 mi) cross that day and on to home.

Overall about 2,200 miles in 11 days of driving; that's quite a lot less than the BXagon did - albeit a fair distance considering it's meant to be a holiday. But with a solid week of 'doing nothing' in the middle of it plus some days off either side, it should make for a memorable holiday.

Sounds really good. And you are right, having that week in the middle will make the difference.
Top
Messages: 1551