Tell us about life with your BX, or indeed life in general!
Messages: 212

Funny thing is when I drive the C4 I have real problems braking progressively. The BX is easy, but in the C4 I just can't get the feel at all to start with even with plimsols on. Usually I end up doing juddering jerky stops when I have hardly used any pressure. If however I push pretty firmly it stops smoothly. I suspect the servo arrangement is to blame, or I really do have a strange touch. As I can get 60-65k out of a set of BX front Bendix pads I don't think I am hard on brakes but progressive with braking.
Sounds like they got the feel and servo arrangement right on that ZX. BTW the Brembo pads will be Ferodo even if they don't say so...
Top

Sorry to hear that news. I know someone too you sadly died from that. I'm glad they don't use that material anymore.
• 1992 Citroen BX TZD Turbo Hurricane
• 2006 Xsara Picasso 1.6 16v
Top

Well I used an asbestos woven rope tied around the tow bar mount to stop the exhaust knocking on it. It must have been on that car the full 15 years I had it. Fortunately I don't have it any more and just live with the occassional knock on right handers....
Top

It is sad but the asbestos thing has got out of hand. Its not dangerous in a stable form. Like cement roofing sheets or an enclosed insulator like a two stroke exhaust cord. You take care handling it and do not abrade it. As particulates its really bad news. This is where Jim probably got it, as like many they would clean jobs down with an airline. I used to do it myself with brake dust, so if I am unlucky I have a % chance of getting cancer from it. It was they way you did it until it was realised it was not safe. Rather than get in a tizz, though, Asbestos just needs to be treated with respect. However an opportunity spotted, for which there is a taxation from the parasites, who merely put it in two plastic bags, rather than one, and bury it in a hole in the ground for a vast fee. That really worked well for bubonic plague, didn't it?
Miguel - 16 TRS Auto S, light blue, 43k miles - £450
Pluto - 14 E S, White, 105k Miles - in work
Egbert - 19 16v Gti, White, A/C & Leather, - Keeper
Walt - 17 TZD Turbo S, graphite, 70k miles, good op extras - Keeper
Scraper- 17 TZD Turbo E, blue, 208k miles - parts
Homer - 19 TXD E, Red, 189k miles - £250
Gary - 17 TZD Turbo E, 118k miles - in work

My first job out of School involved working on fighter drop tanks, which were made out of durestos. You had to careful abrading the resin used to seal the surface when bonding brackets on, or for resealing where it had become porous, and luckily the company I worked for took the precautions needed very seriously, with proper masks, filtered extraction etc. I was only in there for about 4 months before they moved me to another department, but I still had annual lung function tests for rest of the time I was there (7 years). Thinking at the time was that if you showed no deterioration in function after 10 years (which I didn't, as I kept the tests up with my local doctor) you should be safe.
Mike Sims
BX 19RD Estate Mk1 - Timex!
BX 4X4 Estate - Oh god, I've done it again!
BX 17RD MK1 - it called to me!
BX14 TGE, - SOLD
XM Turbo SD,GS Club Estate,Visa 17D Leader,HY Pickup,Dyane Nomad,Dyane 6,2CV AZL,Falcon S,Trabant P50,3x Land Rovers (88" series 1,109" series 2a FFR,series 2a Marshall ambulance),DKW F7, Lambretta LD150 x 1.5,Mobylette SP93,Ural Cossack,Ural M63,CZ 250 Sport,Honda Varadero 125,lots of bicycles & tricycles including (but not only) Sunbeams,Higgins & Bates!
Top

Slight change of track. It's a 'What would you do?' question....

I've finally booked a holiday next year for the family that'll cost over £3k. OK that's cheap these days, but to me it's still a heck of a wedge. But we deserve it, and I want it to be special.

It involves driving hundreds of miles to a place in France and back again, as well as pottering around once we get there. The ZX could do it, I know. But it's small, and with four passengers plus what ever luggage we can fit in, will not be the quickest form of transport. Its 1.9 n/a will need every one of its horses to keep up with autoroute traffic. But, like I say, it could do it. And still probably return 40 mpg +.

It'd be on new Kleber tyres, with a new set of brake parts, as discussed previously, and it'll be fully checked over and serviced etc.

I think it might prove more of an ordeal for the passengers (less me) than appropriate for a relaxing, well-earned holiday. So my mind is turning to another, larger diesel car - which'll be well spec'd with air conditioning a must I think (we're going in July to SW France; it'll be hot).

My budget won't be large because of the cost of the holiday itself. So, for a car in an 'on the road, ready to set off in confidence' condition, I might be able to stretch to £1,250. If I could get a decent turbo diesel ZX estate with air con then I think I'd look at that (and still have a lot of change in my pocket) but it's unlikely.

Likewise a BX TZD turbo estate with air... but that's not gonna happen is it?

So my thoughts are: (doesn't have to be an estate, in truth, if the car was basically good, likewise transmission - manual or auto)
• Xantia 1.9 or 2.1 turbo diesel Finding a good one might be hard but it will be within budget.
(There do seem to be a lot of HDi Xantias coming up. Any good?)
• Likewise Xsara Picasso
• XM 2.1 TD auto (transmission is important on this)
• C5 Facelifted '05-'07 2.0 diesel

Non-Citroen ideas are:
• Skoda Octavia 1.9 turbo diesel
• VW Passat/Golf estate/ Bora TDi
• Audi equivalent of above...
• Ford Focus estate TDCi
• (bear with me on this lol!) Renault Laguna diesel estate (a top range one)... Well if it goes wrong I am in France!

Any thoughts? Personally I am strong on the Xantia route - even consider HDi - but would give anything a chance if it fitted the criteria.
• 1992 Citroen BX TZD Turbo Hurricane
• 2006 Xsara Picasso 1.6 16v
Top

Personally I would hire a car from Enterprise rent-a-car for such a journey, we use them all the time for one-way rentals instead of train tickets and can't praise them enough. Their customer service is second to none, their cars are guaranteed not to be more than 12 months old and their rates are fantastic especially if you use your own insurance. We honestly can't figure out how they do it and make a profit. Worth every penny on a trip like this just for the piece of mind alone.

What do you do during the two weeks driving about when you're there. Isn't that a bit pricey? Maybe not. I guess if it cost £500 that's certainly cheaper than buying and preparing a 14 year old Xantia. Although of course I still have a Xantia at the end of it all.

Are they OK with you hiring in the UK taking it on holiday in France and driving it back two weeks later then? What about the insurance etc. And breakdown cover? Mind you maybe I should call them not bother you lol!
• 1992 Citroen BX TZD Turbo Hurricane
• 2006 Xsara Picasso 1.6 16v
Top

Enterprise won't let you take their cars out of the UK. OK if I was considering a trip to Wales for instance (but then again I'd take the ZX!) but not for a trip to France. Or have I misunderstood?
• 1992 Citroen BX TZD Turbo Hurricane
• 2006 Xsara Picasso 1.6 16v
Top

Matt found this, but alas! We don't have a ZX, so we can't unlock the secrets of the forbidden tape of mystery! 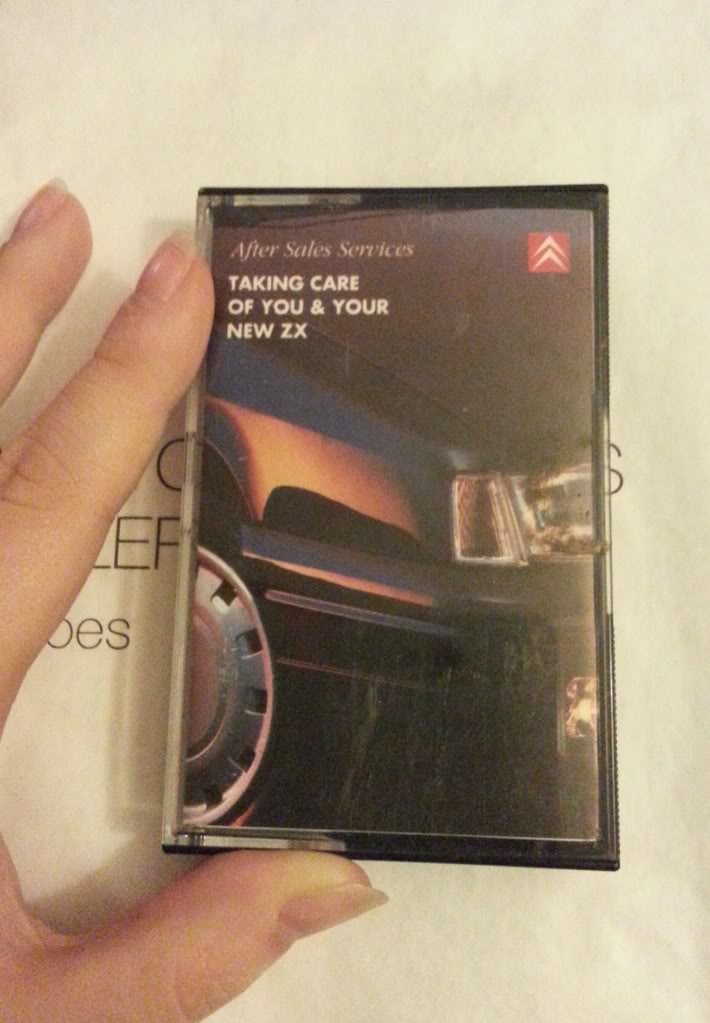 Ooooh, I even have a tape player in the ZX

It gets even better! 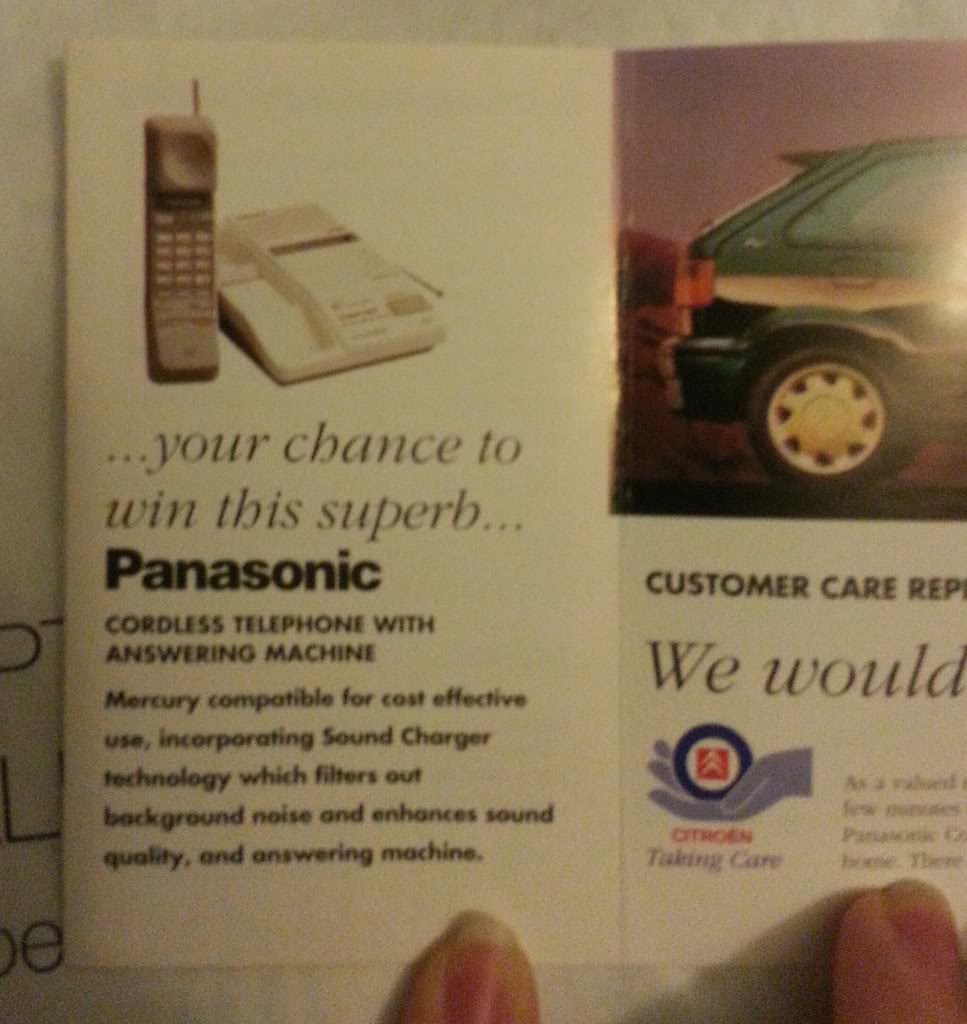