Tell us about life with your BX, or indeed life in general!
Messages: 38

Given my recent forum outage, I thought I'd be sociable and chat about recent events, although I wouldn't blame anyone for being remotely interested!

So since early March, there have been quite a few changes going on. Firstly we moved house, which meant for me, leaving the SO postcode for the first time! I'm now PO, which has been the basis of some piss taking at work, given Southampton and Portsmouth's rivalry!
From Winchester we moved to a bungalow in a large(ish) village called Stubbington, which is next door to Gosport and in the Fareham area of Hampshire.

(with space for 5 cars off the road, unlike the previous 2, so I'm happy!)

Nothing happens here, and thats how I like it! It's got an airfield, the beach is nearby (although it's mainly rocks and broken glass) and theres even a hovercraft nearby! I think it'll be a good area to raise the boys once they're here.

Ah yeah, the boys. Identical twins Still a shock when I think about it! Nat's now 30weeks along, or just under 7 months. But identical twins never go the full 9 months (lack of space being the major factor), 8 months being the ideal time to deliver. However, they can actually request to get out anytime from 28wks onwards!

So far everything is as it should be thankfully, and the docs are happy with their development. I'm bricking myself that something will be wrong with them once they arrive, but I guess that's natural. We get a scan every two weeks, and a consultant meeting every four. Different types of twins do differ, and some need to be scanned every week, with non-identicals a lower risk and needing only one every four. We did get a brief go at a 4d scan though, which was amazing, they look like this:

(thats not mine, we weren't supposed to even get one, you normally have to pay!)

I'm not unprepared for them though, the nursery is well underway (well one corner of it:)

We've got their car seats, which are red to match the valver! Bit silly, as I'll only be using the valver until August 31st! And come August 31st, they'll visit their first car show. They'll be bored stiff no doubt, and totally unaware of whats going on. Probably asleep in fact. But theres a local one in Gosport that's not too big which we went to last year and I think it'd be ideal to pop down in the BX on it's last day of service until next year.

So, BX's.....whats happened there? Well, I still have two red valvers, although it's fair to say neither are looking all that good!
BAH is still sporting the dented wing that it picked up in storage last time and the paint is getting more pink by the day! 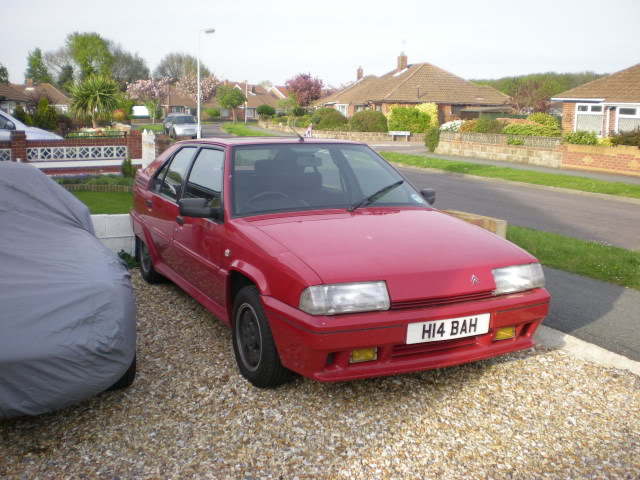 (trust me, the cameras being kind!)

However mechanically it's actually better. The tapping engine did infact turn out to be the bent valve I'd suspected. I bought another head for £25 as spares, as the casting itself was cream-crackered. I used the valves from it and rebuilt the thing with new seals and gaskets etc, just a general de-coke. And hey presto, tapping gone! It's lasted since 2005 with a bent inlet valve, so I'm impressed.
I also sold the leather to Mat, and to be honest I was worried I'd done the wrong thing, but smell as barn aside, I'm loving having the valver seats back: 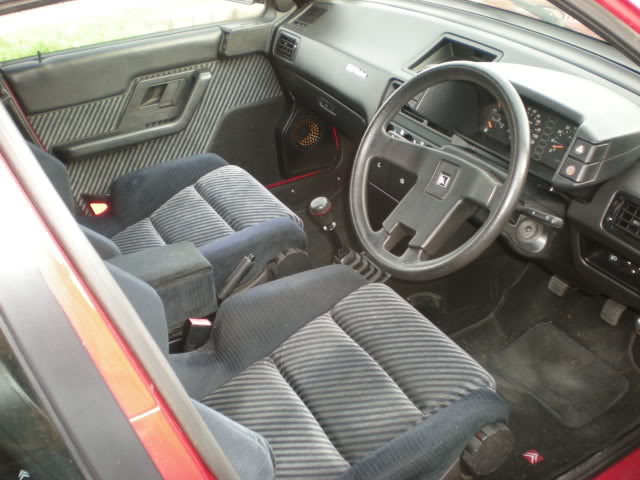 They just work so much better in that car. You're a bit more pinned in place and lower slung. I've come to the conclusion that having the leather in a valver is like putting Escort Ghia leather seats in an RS Turbo. They're both good, but for different things.
Tracking's still out mind, but with a new set of Toyo Proxes fitted (came in at less than £70 the pair, and they're V rated) it drives 100times better. PAS is still holding up though

And the pink one? Well I got it at the last house, then moved it here via an MOT. It failed on 3 pages of red headed paper! It's been sat here since, with a lack of time and so much to sort being the key reasons, but yesterday I moved it into my new garage (which is old, dangerous and roofed with asbestos - nice!) and began assessing it. I do think it's a go-er. It needs alot of work, but I've got a few spares from the last car and some of my own left over than might put it right. Then hopefully I can tidy it up, and find it a new home. Did think about keeping it, and having one turned and one original but it's just not practical. The plan is to make it a nice example, not just an MOT'd one and price it out of the reach of the 205 brigade. If an engine seeker offered me £800 for it, I'd sooner sell it for less to someone who truly wanted one but had tighter funding. As it stands, it's worth very little but with a few weeks of work I think it's got potential. It'll never be a show winner without some paint IMO, but hopefully I can get it close.
Yesterday was good though. Got the heater working properly, the sunroof now works and the remote locking (with original plip!!) is also working. Today I'm hoping to get the CV boots changed, fit new strut return hoses, change the accumulator and sort the leak from the ram. Then at least I can start it and move it without it ruining the new driveway!

Some pics from yesterday:

And the door....think it'll polish out?

Thats it so far. Hopefully I'll have more to report back with later. Man-flu is never good to work with, and I've had it 3 times this year now!


On the side, a big thanks to Mat Fenwick, who's gone to the trouble of finding a new door for me, and sourced a new crossbox. I need to get up to him and give him some money!

Congrats on the baby and the new house looks really nice. Also looks like a fairly good MTB in the garage too!

Have you managed to sort out the constant hiss noise of the BX you mentioned last year?
Graeme M

And nice to see you settling into your new abode. And the red valver twins are coming along too.
• 1992 Citroen BX TZD Turbo Hurricane
• 2006 Xsara Picasso 1.6 16v
Top

Aero: Cheers, the bike's not actually anything special. Pop down to halfords and hand them over £230 notes and you could have a Carerra Vulcan 08 too! Strangely enough its a unisex bike. Has a crossbar and comes in blue, but has some girly features too. We haggled and bought the shopfloor one, used a voucher and I rebuilt it when we got home. One of the random and useless facts I can tell my kids is that I'm a fully trained cycle mechanic

Was my first proper job.

My girlfriend bought it about a year ago and has ridden it twice! Same old story there I guess, but what with being pregnant its not really had a chance since. It may be sold soon to raise kiddie fundage.

And the reason it was bought has nothing to do with the fact it's called a Vulcan..... 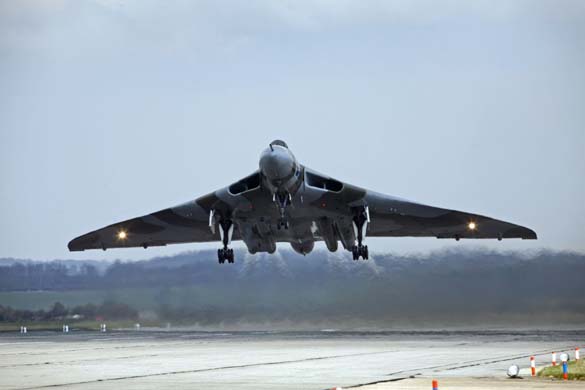 Phil: Yeah all going well thanks. The 4d scans are amazing. Like I say, thats not mine as ours wasn't official....it was the young scanner lady playing around! But we watched them move around in that detail. amazing stuff.
Top

Kitch wrote:I also sold the leather to Mat, and to be honest I was worried I'd done the wrong thing

No, I think you definately did the right thing!

Best of luck with the pink one, I'm sure we can sort something out regarding the bits.

Well after a few hours cleaning, I managed to get the pink one less pink! This pic shows just how bad it had got:

The colour is coming back in places, and the paint has a nice finish over most of it's surface area, but I think the bonnet and roof need mopping to get the remainder of the cloudiness out of them.
I was hoping the car would come up really good, because I'm probably gonna have to sell it straight away and was hoping for a mini-restoration type affair, so it will look as good as it will run. I'm a bit gutted however, as what we've ended up with are a multitude of different colours:

Now the OSR door isn't a problem, I've left that out because it'll be binned in favour of a straight replacement. But if you'll note the front wing, rear arch spat, bonnet (all replicated on the other side!), you'll see they're all a different shade of red. Now I can tell this car has had some paint (quite alot) in the past, but due to the odd and random placements of it, I'm guessing it was keyed or something in it's early life.
Now the different shade is a problem. It's not horrifically different, but still noticable and no amount of polish will change it! It's not a great job either, poorly prepped and worn down to primer in places.

Stand a bit further back, and missing badge and grille aside, it looks pretty presentable IMO:

This presents me with a problem though, because I've justified spending a fair bit of money already (not to mention everything I still need to buy!), and spending hours at a time working on it in the hope that it'll turn out a decent example and would be financially worth it.
But if the paint doesn't match, no one is going to want to spend big money on it. Thats fine by me, I can still get the car back on the road on a smaller budget and price it accordingly. Mechanically, it's really good. But priced lower will attract the vultures and to be honest it's not another case of whoever waves the money flag wins....I'm not sinking loads of time, effort and money into it to have it all taken to bits again and all the decent spares I've used going to waste when I could have kept them, or dished them out to mates who needed them.

I don't really have a plan with it right now. All I know is that within 5 weeks I'm more than likely gonna become a dad and time will be something I don't have!

But for now, that's what I've been doing!
Top

Just needs some paint that matches! Everything else is there, and original.

Except the stereo!
Top

It's been so long since I even got a quote, how much does it cost to get a good respray done these days? As a matter of interest.
• 1992 Citroen BX TZD Turbo Hurricane
• 2006 Xsara Picasso 1.6 16v
Top

It's a fairly broad priceband with bodyshops. Getting a cash job done on a weekend would be your aim. I know someone who got a Xantia done for £800....thats a prep and blowover, the shuts etc didn't need doing. Can save money by stripping and prepping yourself, although some bodyshops refuse to paint over someone elses prepping, in case they've not done it right. That usually gives you a clue they'll probably end up with a good finish.

But you'll get three quotes for £2k, for every reasonable one. There aren't any dents as such on it either, and little dings and chips bump the cost up alot.
Top 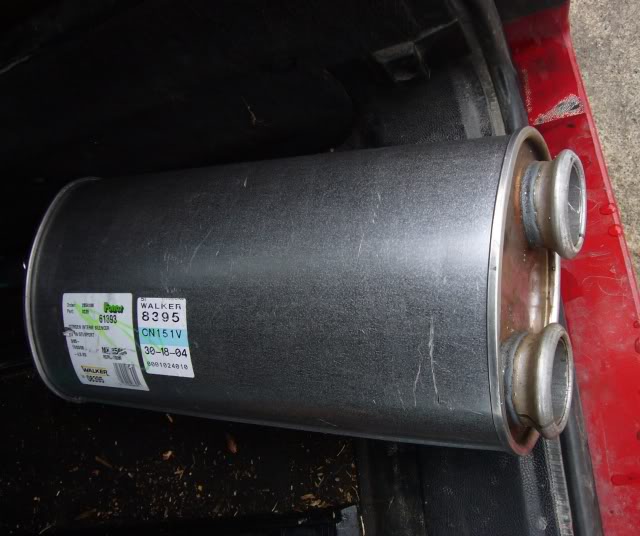 Finally got it!!! Maybe see you Saturday?

Why spend all that money and effort machine polishing a crossbox?
Smokes lots, because enough's enough already!