This is Chubley my new daily drive and first Citroen.

Chubley was listed on our local freecycle after he ran away and demolished a garden wall. We were finding our 205 a little cramped for 5 people so were looking for more suitable transport and as 'different' specifically 'not a Vectra' was our main criteria he seems perfect. We're still deciding on the future of the black stripes, They may have been fitted from new as he was at one point owned by the BBC. 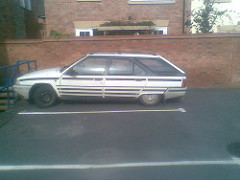 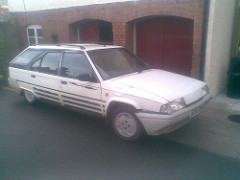 His former keeper is a wonderful charicter who has maintained him in mechanical perfection if slight cosmetic decay for many years but at 89 has decided to call it a day on crawling around under aging Citroens. This didn't quite stop him however from fixing the handbrake and a slight LHM leak on the morning that I came to pick him up fully expecting to be scratching my head over these jobs this weekend. As a farewell gift, Chubley was blessed with holy water and firmly instructed to continue to behave well

His front n/s wing is coming off tommorow to weld the top hinge back on hopefully preventing the passenger door from falling off and the front bumper is being remounted. Wish him luck with the MOT next week

Sounds like a well loved car. Good luck with the mot.

Any idea what the Beeb used the car for? I know they used CXs for filming horse races...

Excellent, along with the Green Tiger this'll be our second striped BX

Had a busy day with her today, took off the wing, welded up the A-post. The door now feels a lot better. I also removed most of the front end parts to straighten up the front panel, its still a bit twisted from the garden wall incedent but the lights and bumper look a lot straighter which should help with the MOT. He's getting close to service time but it can wait until I have the ticket in my hand before I spend the time and money.

Steve, Theres a small plate in the boot, I think it says 'property of the BBC Electrical Dept' I'll try and remember to take a pic to post up.
Ex BXer
Top

Advisories on a tyre and the other fluid return pipe, so they can be done this weekend along with the oil+filter and maybe some stripe tidying.
Ex BXer
Top

Good to meet you at the show, hope you got some good info & parts to help the BX on its way.

Hi guys, great to meet you all at Gaydon. What a weekend, I'll definately come next year

Chubley mostly behaved well on our first long run. However as most of you know from all the fannying about I was doing trying to replace it, the lower part of the speedo cable snapped on the way there. I'm expecting a new one on the doormat in the next few days. Many thanks to RxBx and Bandit for the instructions for removing the old part as well as the nice bloke with small kids that helped us diagnose the fault.

Thanks also to Richard,Brian,Vanny and Kermit for the various parts, the hubcaps make a real difference to how he looks, the shiney new nearside light makes a nice parter for the new one he sports on the offside. I'll wait to fit the wings until I have a better welder to tidy up the inners at the same time. The paint match on the nearside wing is uncanny mind

Tim, good to see you at the weekend and well done on your trophey. It was you that told me that it wasn't actually an RD wasn't it? The weekend was a bit of a blur

Is it a TGD then?

The journey home started off slowly as with no idea of speed, I crawled along trying to avoid a ticket. This was a bit dull though and my body remembered that it had only had 3 hours sleep. So the Sex Pistols cassette was found, the windows went down as did my right foot. I now know that the front wheels could do with balancing

The stripes have got to stay! What a unique car.
Top

Welcome to the club...and good save!

They really are quite addictive cars arn't they, we were just after another slightly quirky old banger to replace the little Peugeot and I've found myself lavishing far more attention onto him than the VW thats supposed to be the classic round here

Tim, you're right of course it is a TGD so I've changed the title of the thread,maybe I'll find the right badge for the back one day.