There's a lot of useful information in the following link, but it was written some years ago now and hence more time related issues are worth a check.

Most specifically rust. BXs seem well protected in relation to other cars of the same era, but look out for inner wings, A posts around the door hinges (they can also crack in this area), bottom of the C post, sills, and boot floor (especially on the hatchback).

The rear suspension struts can corrode though and cause a high pressure LHM leak, especially on estates where the strut walls are thinner due to the larger piston diameter.

Head gasket failure - diesels seem more prone to this than petrols. Probably caused in the main down to poor maintenance (dirty coolant/deteriorating radiator) and most models having no temperature gauge, so by the time the warning light comes on it's usually too late! Symptoms include rapid pressurisation of the cooling system from cold (listen for a hiss say 30 seconds after a cold start), 'hard' coolant hoses, oil in coolant, water in oil, unexplained water loss, steam from the exhaust etc.

Small LHM leaks from around the base of the front suspension struts are likely to be the strut return pipes - cheap and easy to replace but worth going for OE pipes if possible.

A hard ride is often down to flat spheres, although less common now as more BXs are enthusiast owned. Fairly easy to change, at least at the front and can be got for around £20 each. A short 'tick time' (every few seconds) can be down to a flat accumulator sphere (cheap and easy to replace) or a worn hydraulic pump (not too bad to change but pricier). Problems with the latter will often be accompanied by intermittent loss of power assistance from the steering.

Pictures welcome of any trouble spots for rust etc, I'll try and add a few as time goes on. Also feel free to add any more pointers below - ideally it will all be condensed into an easy to read guide at a later date...

Below is a guide from Car Mechanics magazine, originally scanned in by DLM. 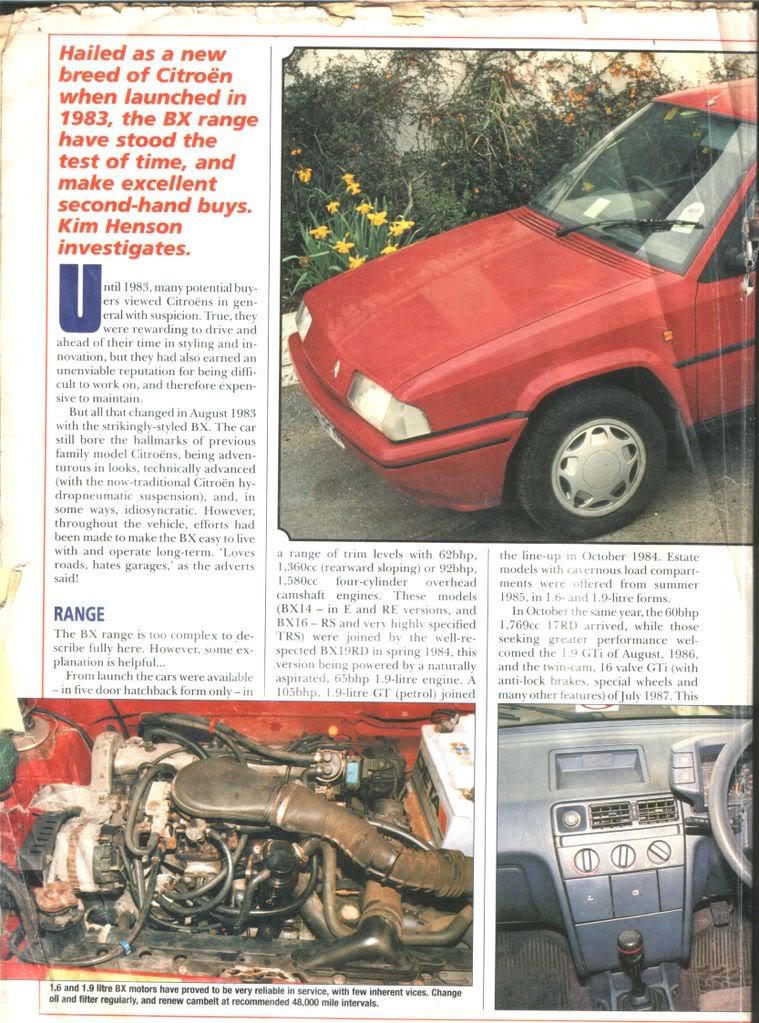 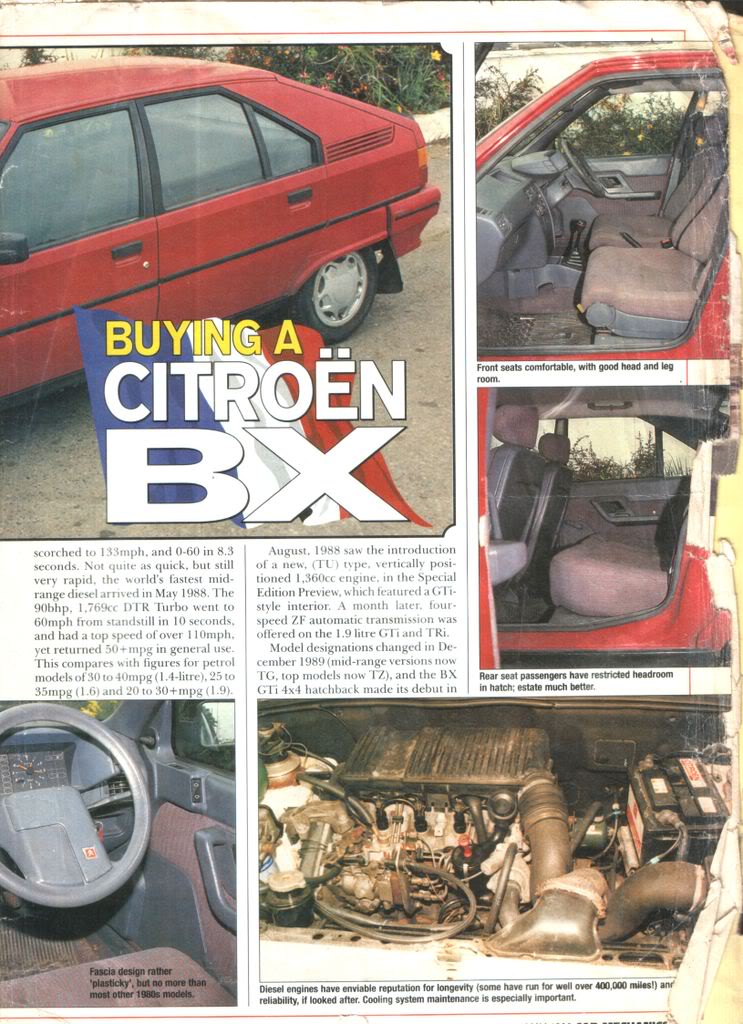 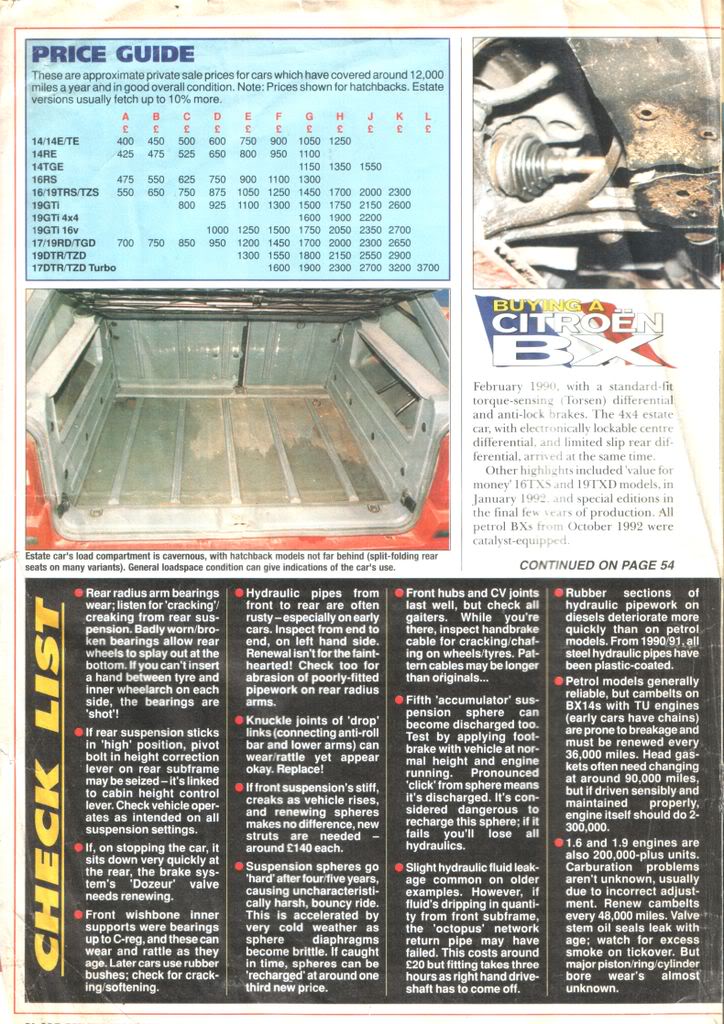 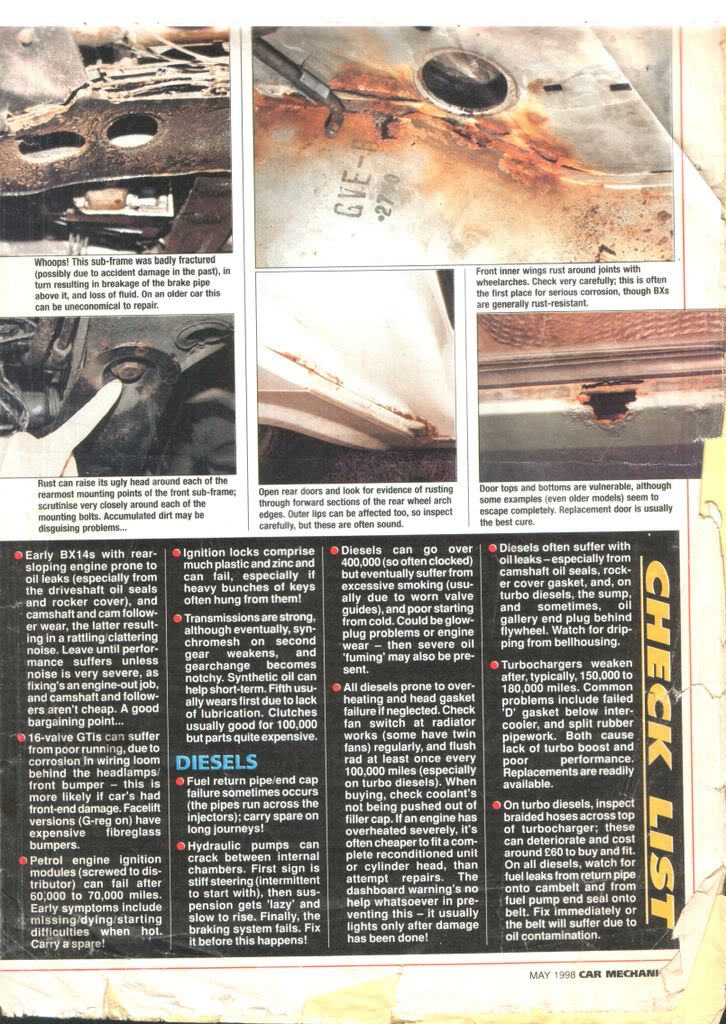 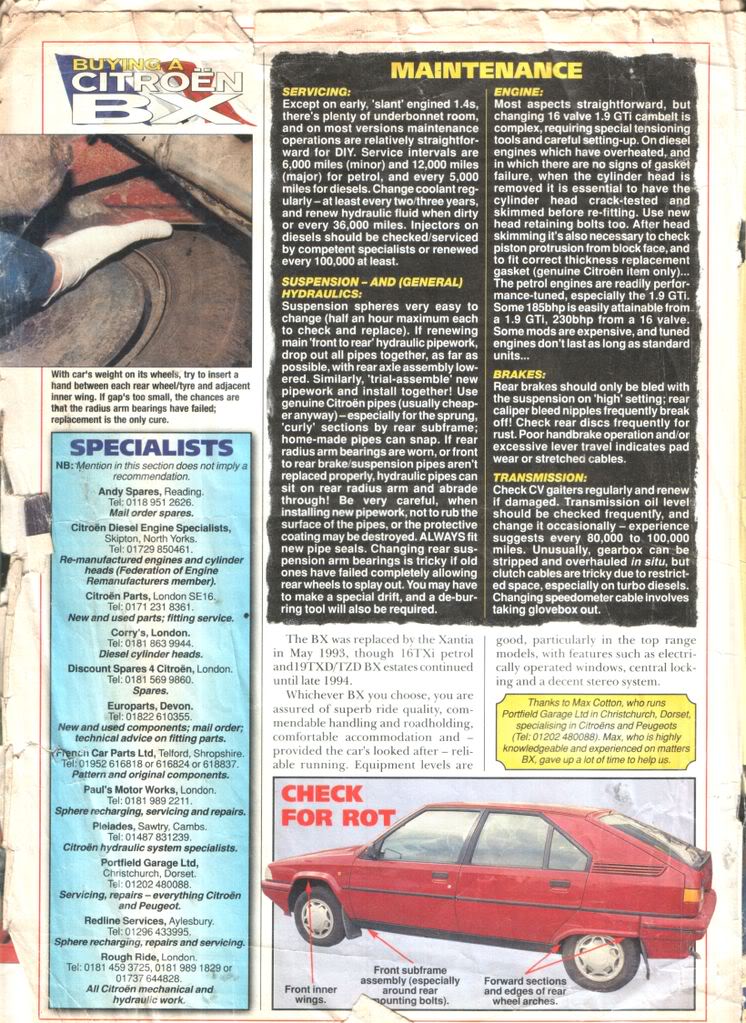 around the fuel filler flap: 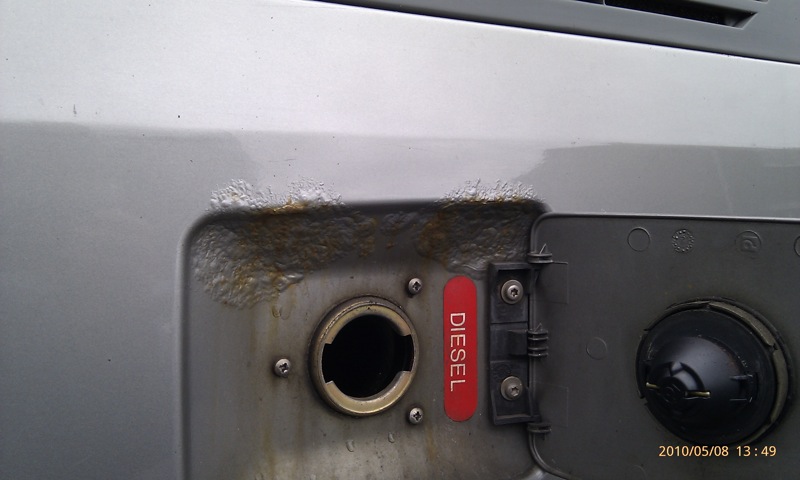 drivers door piller / hinge area even after a repair: 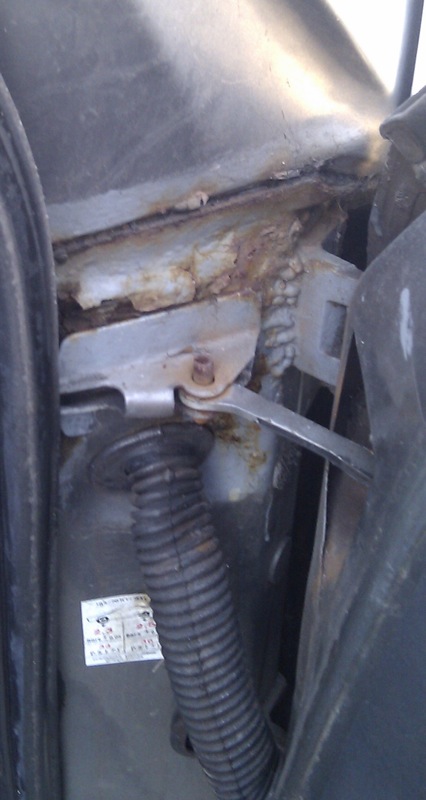 starting to bubbleup on the rear wing around the bumper.. 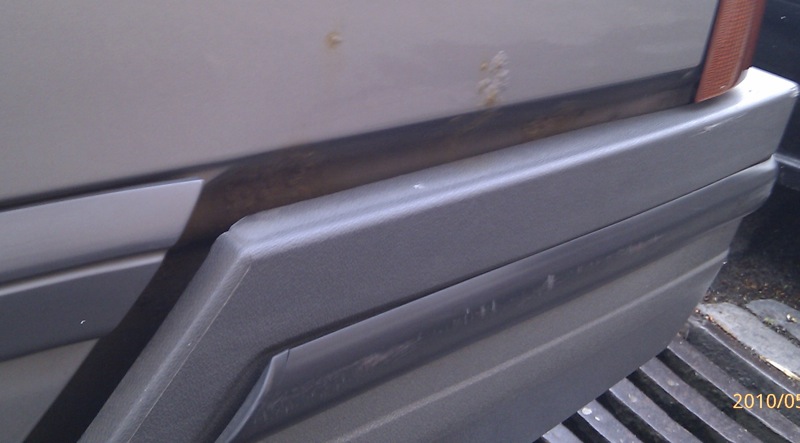 Don't forget the boot floor - in the outer corners especially above the exhaust hanger (which itself can be crusty/held on by a flaking scab of rust in most cases!)
• 1992 Citroen BX TZD Turbo Hurricane
• 2006 Xsara Picasso 1.6 16v
Top

To add to the above, apologies for some of the pic quality, but here are some more examples of rust "in the field".

First off, the front inner wings, fairly advanced, probably from a scrapper 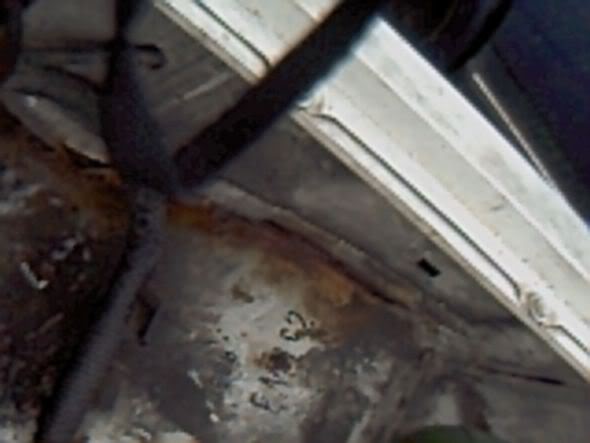 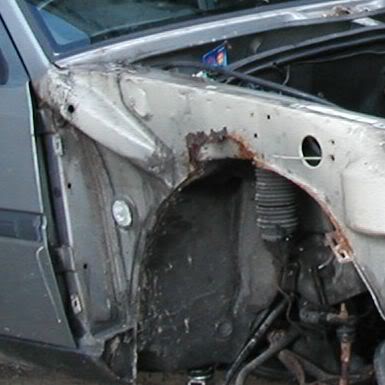 This may well be repeated on the other side, too.. 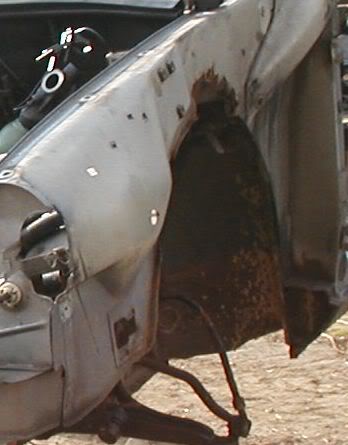 Moving swiftly to the rear of the car, there's the box-section just outboard of the rear axle section to which the rear spheres are attached. The area round the bump stop rots, along with other part of this fairly "open" box section.

There's some more rot going crossways here in the folowing pic that I can't tie to a specific structure without a BX to refer to. 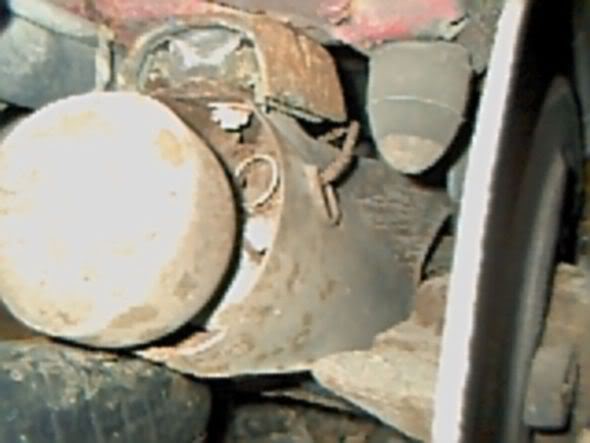 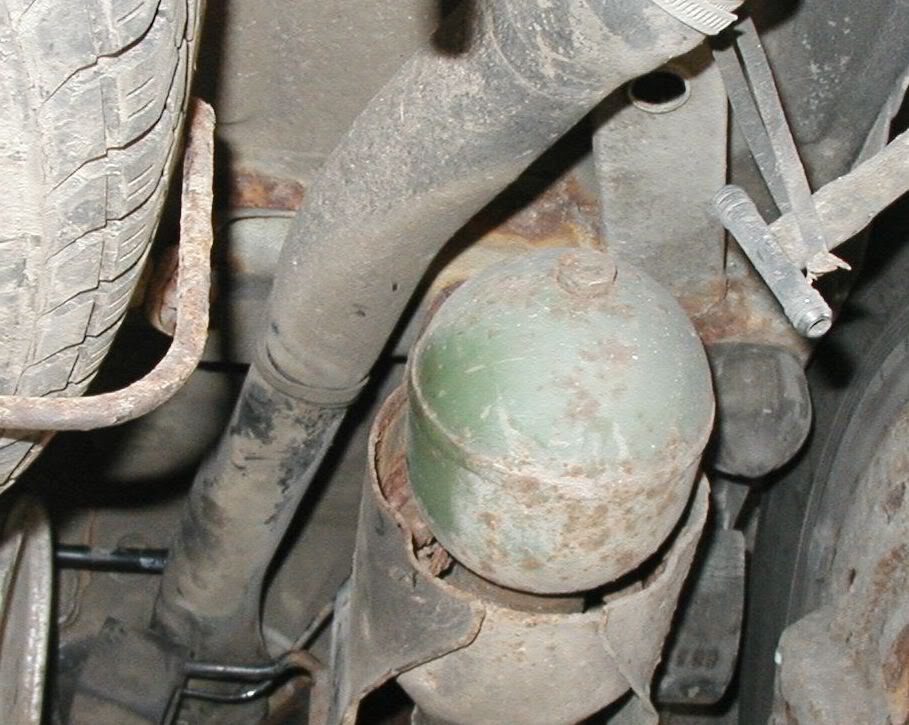 Moving further back, here's an example of classic boot floor rot on a hatchback 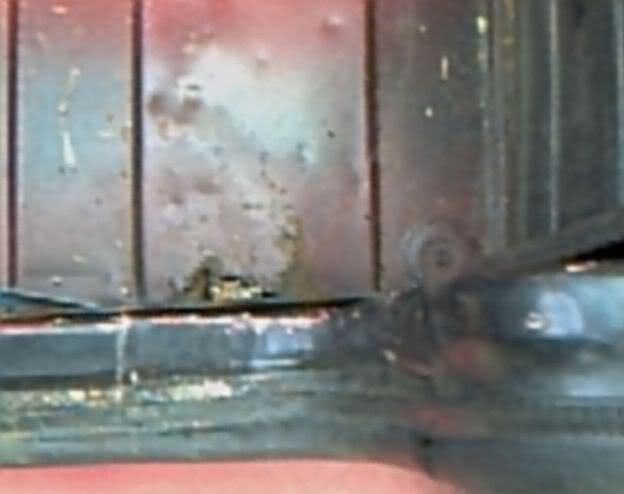 which is often not seen from underneath , and often creeps along the inside of the box section underneath, as well as right along the boot floor/rear valance edge. 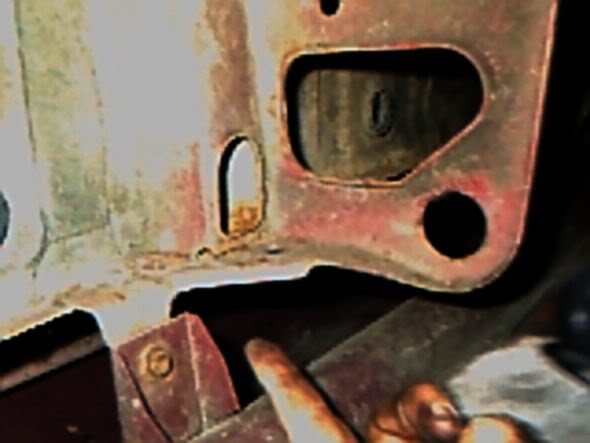 If you can't remove the carpet, thumb pressure along the very rear of the boot floor will probably tell you everything you need to know.

On the estate, there is no right-angle welded=together edge to rot along, though water can get trapped under the plastic trim covering the rear of the floor. I haven't seen this do major damage, but have seen rust-through next to and behind the upholstered panels which form the sides of the boot space of the boot. If it's coming through from outside, the first signs come in the form of holes. It's an area where plenty of mud and muck is thrown up and sticks.

If checking out the boot floor with the carpet out, it's worth checking this out as well. A really thorough investigation would include taking a look each side at the rear pair of retaining bolts for the rear beam/axle, blanked off by tape over the two cavities for them let into the boot floor.

The front pair of fixings for this, under the rear-seat trim, unfortunately requrie quite a lot of trim-stripping to examine. I recalled this car I was dismantling as sound in bodywork but this pic of the area makes me wonder if I was wrong (apols for pic quality on this one in particular).
_ 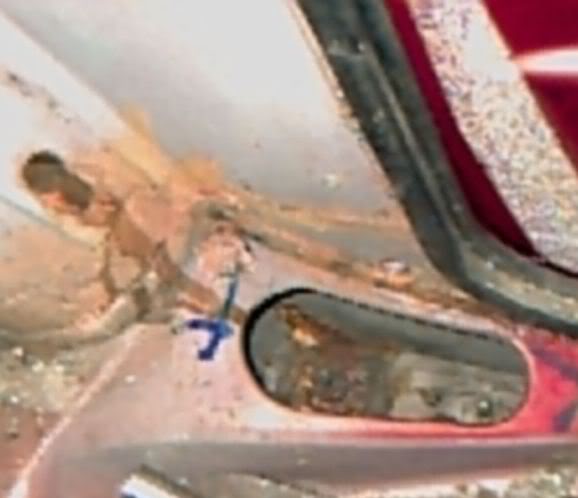 Underneath at this spot, the sills may look OK from the outside, but the inner sills could be hiding plenty of rot, seen here both behind and in front of the plastic fuel tank (a pretty horrible area to be welding around). The car needs to be on stands to see this. 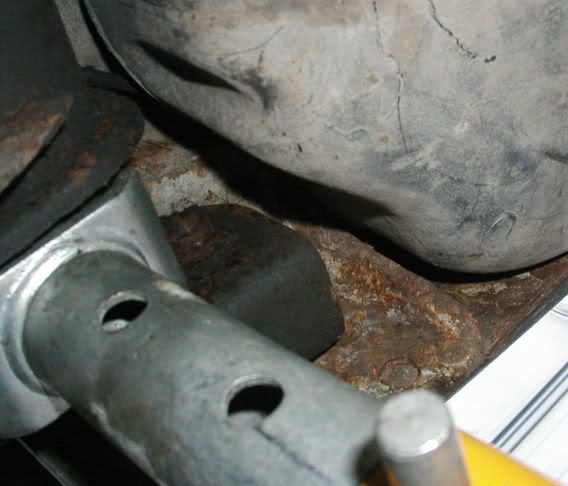 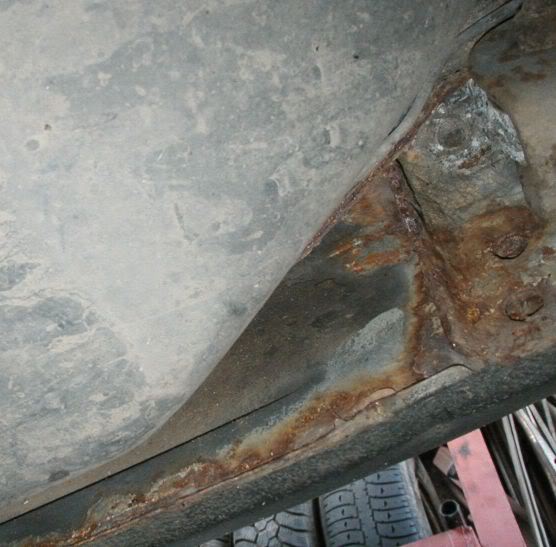 Finally, it isn't structural, but on BX hatches the sunroof area can harbour some pesky rust. When I swapped out these covers for the sunroof cable run, there were reasonably plentiful replacement parts available in the scrapyard - which is no longer the case. 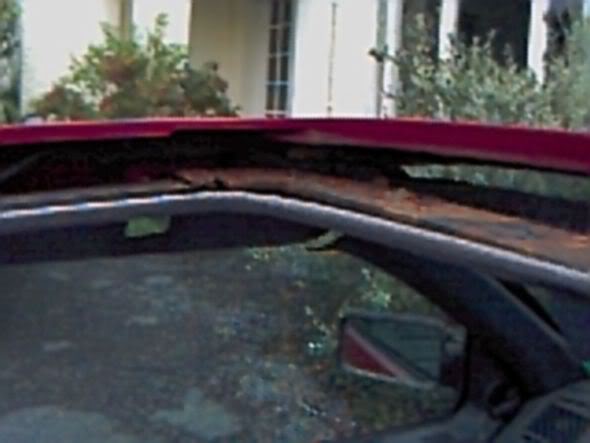 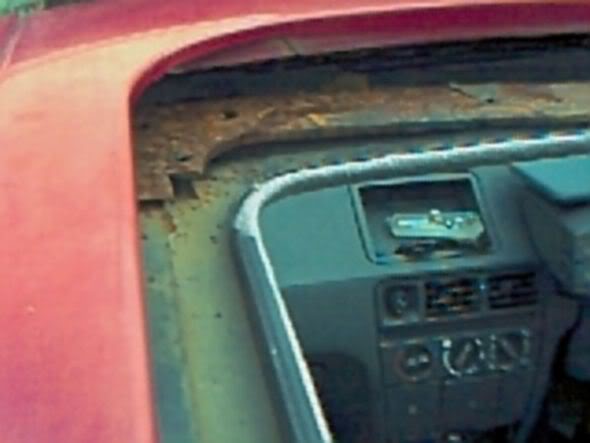 Occasionally constrained by geography. When not driving, can rely on ferry, two wheels and musclepower when a couple of miles as the crow flies would become a round-road-trip ten times the distance.
Top

After the 'What Colour is this' in THIS thread of (TizzyD), although its obviously not a Technical issue, but should qualify under 'FAQs' !

So I thought it best placed under this post/thread of 'BX Buyers Guide' (Mat, if you think its worth being in a separate thread, then just split it off) ! 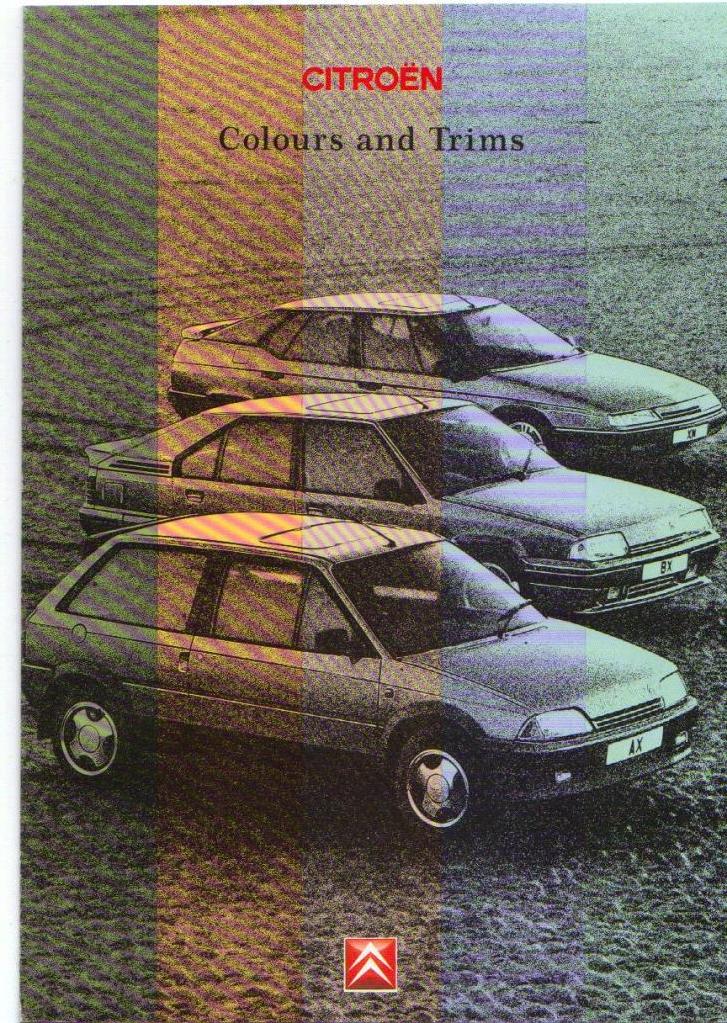 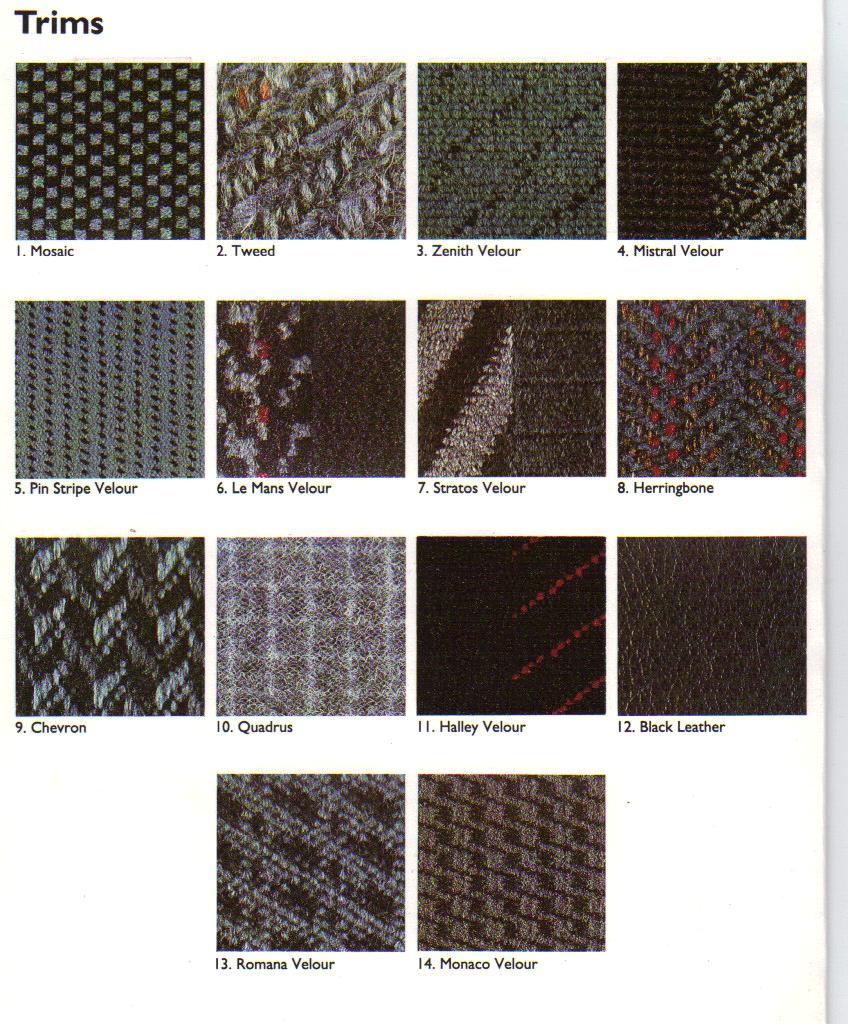 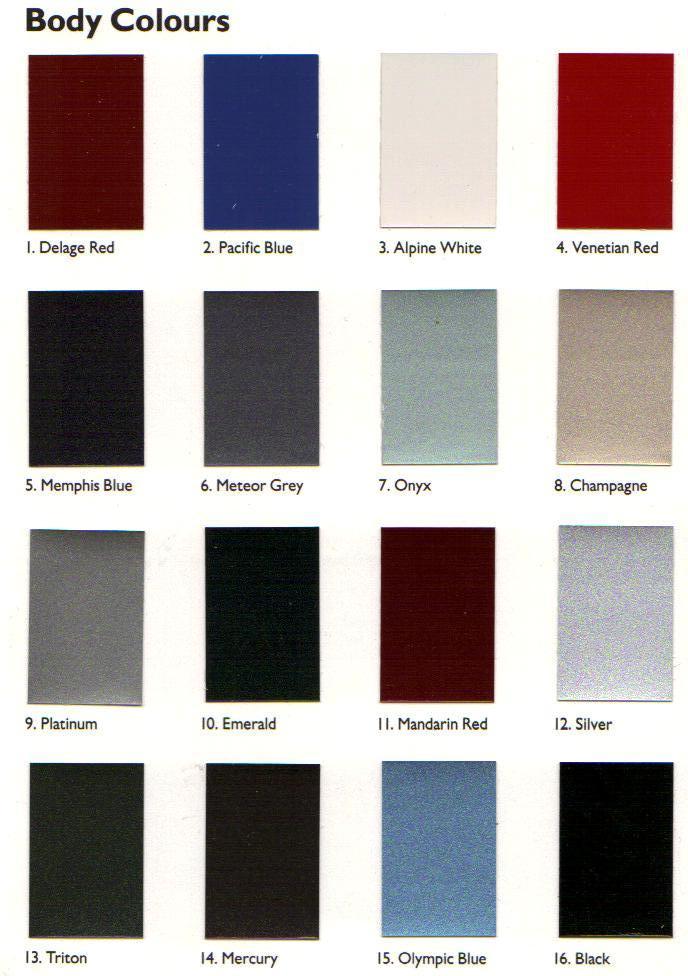 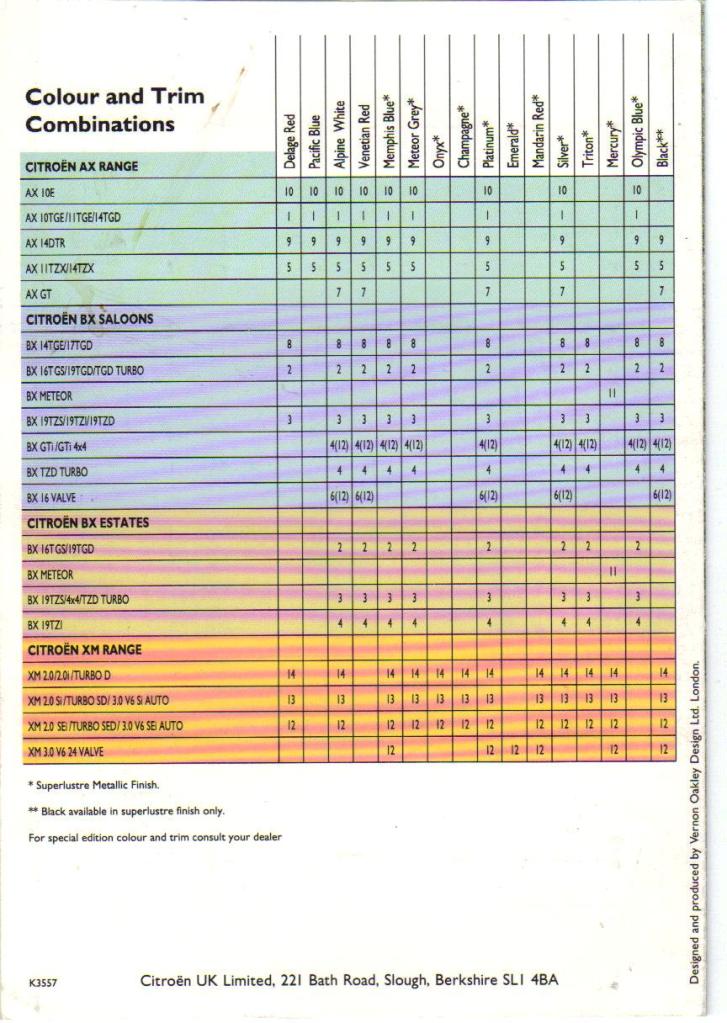 MULLEY wrote:Handy guide, but erm have you not spotted something obvious, i had to turn my laptop upside down.

Matt !
Page 1 and 3 where scanned upside down, so I flipped/rotated them in my 'Photo-bucket account' so they are the correct way up (It just takes sometimes up to 24 hr's to appear the correct way) if you used them say for E-Bay or a Forum 'Img' post straight after rotating/editing (I've haven't a clue why) !

So when I did see that pages 1 and 3 were appearing the wrong way on the forum, I actually stated (In a P.S. comment) that they will appear the correct way up within 24 hr's !

However after I looked at my posting approx. 1 minute afterwards all the pages where appearing the correct way up, so I therefore edited/removed my ('PS comment) which you obviously did not see !

But I'm sure all will be fine within 24hours time !

They look allright now, so gawd knows whats happened, put it down to the IT fairy??