I thought it was about time to start a thread in this section, not for the enjoyment of any of you members, but so I can keep a track of my own car situation

Can't be bothered to tell my story from the beginning, so here is a brief summery and a few links to my previous BXs and stuff:

Here is my 14 TGE/16v lookalike from the beginning. My first proper car. I had a few others before I passed my test in December 2007, but this was the car that started it all for me. It will always hold a special place in my heart, but it has gone now... 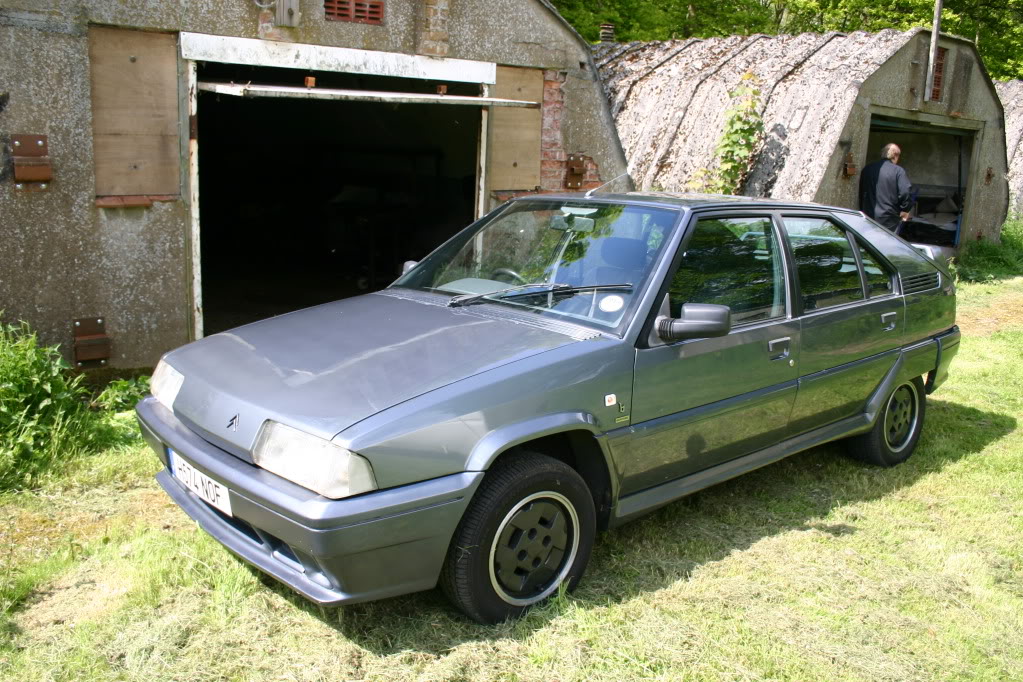 This was the last picture I have of it before it was stripped and taken to the scrap yard. It was a sad day, but it was beyond economical repair. If it had been a 16v, then it would have been welded up, but as is was a relatively high mileage 14, with dodgy (albeit good looking) modifications it was not worth the time, effort and money, as I had already bought the valver at this point. Not to mention the fact the waterpump was fucked and the headgasket was slightly suspect, after being replace just months earlier.

My first 16v and second BX was purchased almost 2 years ago, and it has been a bit of a rocky road. The first year was relatively trouble-free, and it was (And still is) a hell of a good car. I was absolutely stumped by an electrical problem that meant it wouldn't start, and the car has sat for another year. I finally got it running again a couple of weeks ago, and am slowly readying it for another MoT. 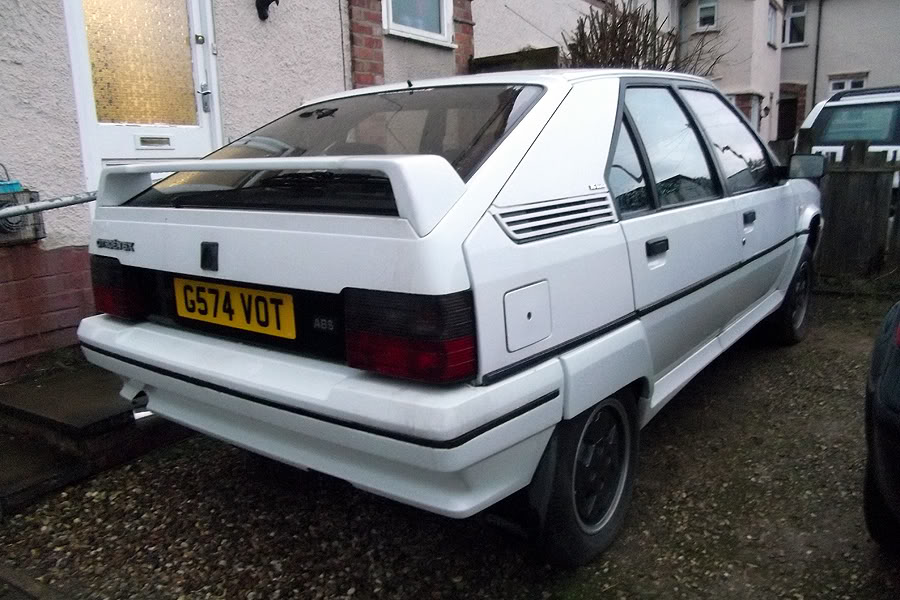 This is it as of last week... Not in bad shape at all, but will need a bit of love after a year off the road.

The next part of my BX story started at the end of 2010 when Roverman decided he was to sell his Phase 2 16v on eBay. I ummed and ahhd over the auction for a while and bottled out of making a bid. Maybe it was the right thing, I already had three cars at the time, and with one none-running BX, maybe I should just stick with the one? 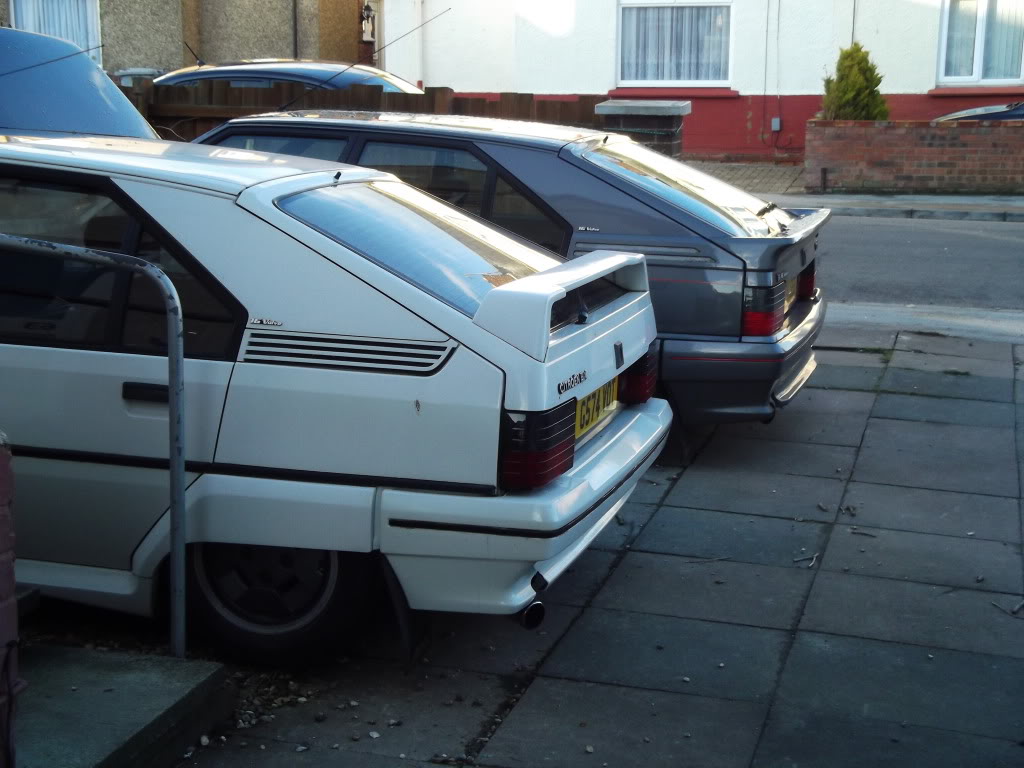 I asked Tim if I could have first refusal on the car if the eBay sale fell through, thinking there was a slim possibility... and what do you know - It did!

My latest BX 16v is quite high-mileage, and does have a few issues. I bought it knowing this, and other than a burst coolant hose have had no real problems with it. I did discover a rather worrying air leak, but once sorted, the car runs absolutely spot-on. 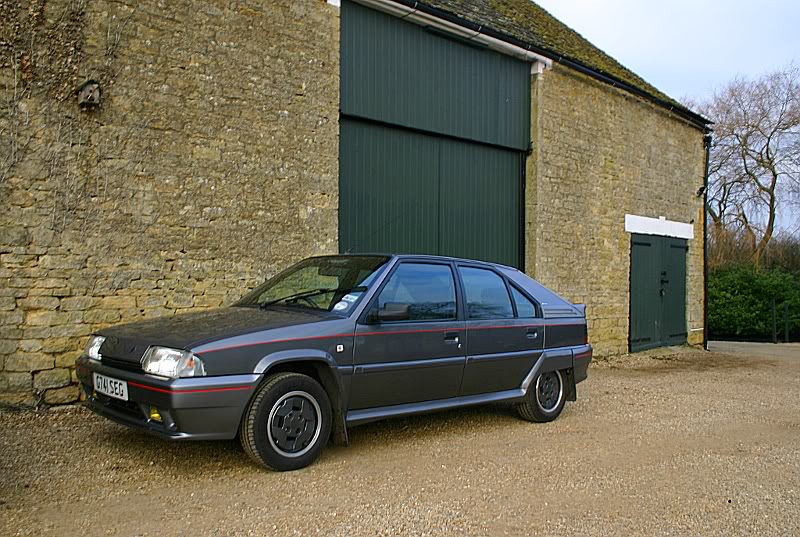 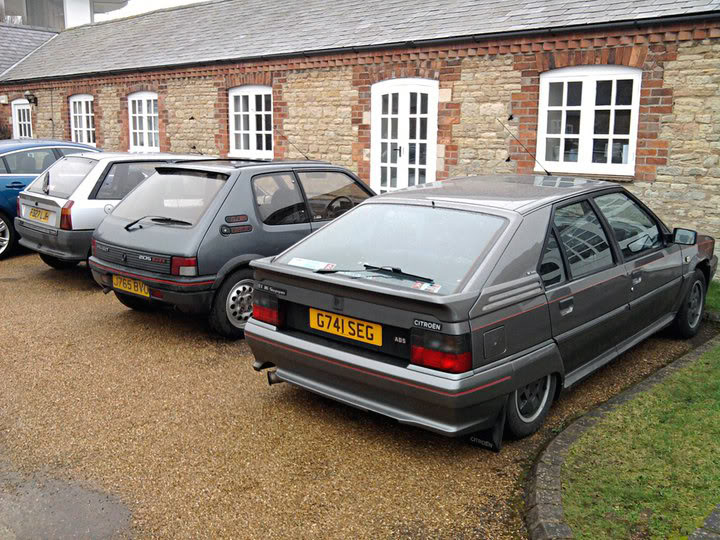 My future updates will be a lot more in-depth, I just wanted to get the thread started with a bit of an introduction... Any questions ask away!
Last edited by Matt H on Wed May 09, 2012 2:12 pm, edited 1 time in total.
Top

A lovely pair of valvers Matt. VOT is the car whose photo on Wikipedia convinced me to press the button and buy my BX.

Question is, which do you prefer, and why?

Long answer: I would like to think that I prefer the grey car, as it is the one I plan on keeping long-term, but hearing how smooth the white one is (even after being stood for so long) and the fact the suspension stays up for the best part of a week (the Grey one struggles to stay up for more than a couple of hours), I'm still undecided which one is the better long-term prospect.

The phase 2 is the nicer car to drive, and much nicer to look at, but there is something that draws me to the White one. I think it probably has something to do with the passenger ride in a white Phase 1 16v I had when I was 7. I still remember that day like it was yesterday, and have wanted a Valver ever since.
Top

Doseur strip and re-build? A fascinating excercise and not too hard. Or get a re-con one from Pleides as Kitch did. It's just a bit fiddly getting it in and out.

They're both great looking cars - why do you have to decide which one to keep? Keep them both or buy a third!

What are those military looking nissan huts in the first pic where your 14 is parked?
Todd

You say the P2 is nicer to look at - is that down to condition of the paintwork, colour, or p2 shape vs P1?
Ray

Glad to hear that the P1 is running again. What was the problem in the end?
www.classichub.wordpress.com
Top

toddao wrote:Doseur strip and re-build? A fascinating excercise and not too hard. Or get a re-con one from Pleides as Kitch did. It's just a bit fiddly getting it in and out.

They're both great looking cars - why do you have to decide which one to keep? Keep them both or buy a third!

What are those military looking nissan huts in the first pic where your 14 is parked?

It's on the list of things to do. I fitted a new one from a Xantia on the white one, which is why it's so good I guess.

The World War II Nissen huts are on a farm, where I had it stored. It is also where my (I have a half share) Alfasud is stored. They are really interesting looking things, but are heavily guarded, and in a very secret location...

You say the P2 is nicer to look at - is that down to condition of the paintwork, colour, or p2 shape vs P1?

A bit of all really. There is very little wrong with the grey car cosmetically, compared to the white one which cleans up alright, but is hardly perfect. I prefer the Phase 2 styling (although that's not to say I don't like the P1). The colour I can take or leave really. They look great in white or grey, to me anyway.

Glad to hear that the P1 is running again. What was the problem in the end?

It all came down to a broken wire to the ECU!

I received this back from the model makers a couple of weeks back: 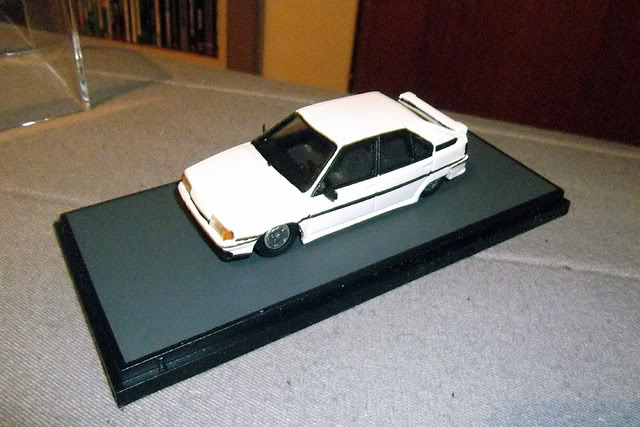 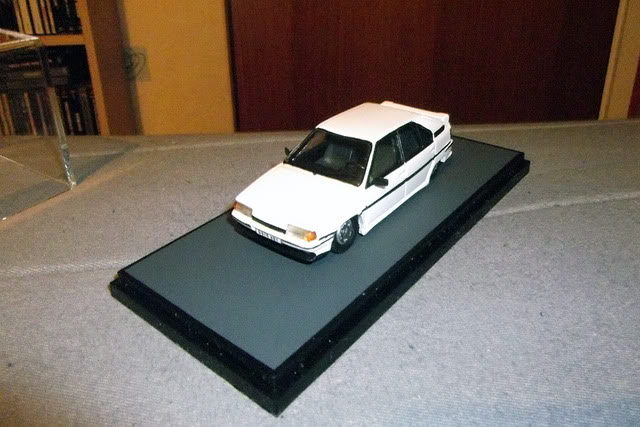 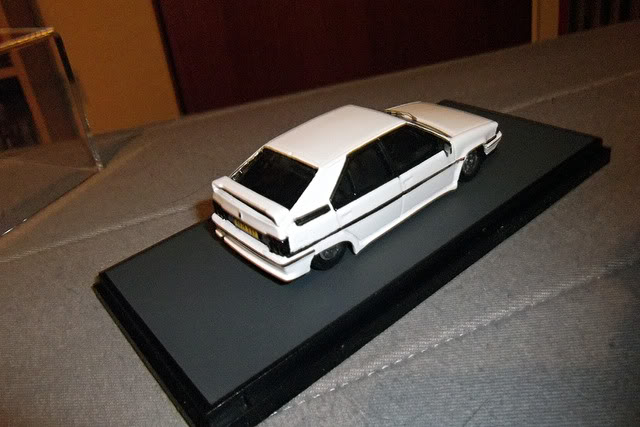 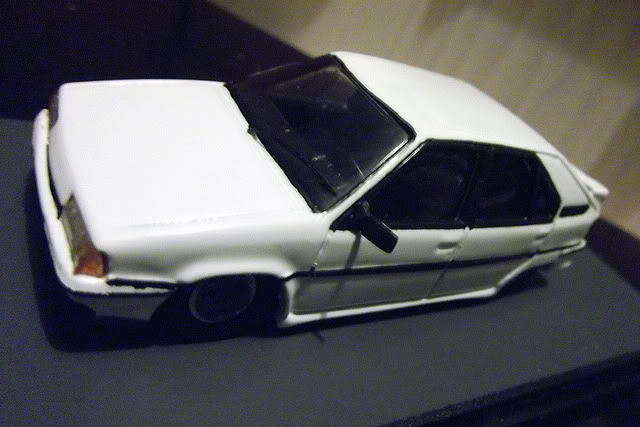 It looks a lot more presentable in real life, but aside from the original model's shortcomings, I think it looks great, and it has been painted to look like my real car

Like my real car, it is truly unique... and it was a little worse for wear when I bought it. I fully recommend a company called Grand Prix models for custom work like this, as they reconstructed the a pillar, added mirrors/windscreen wipers and painted it.

This was it when I got it: 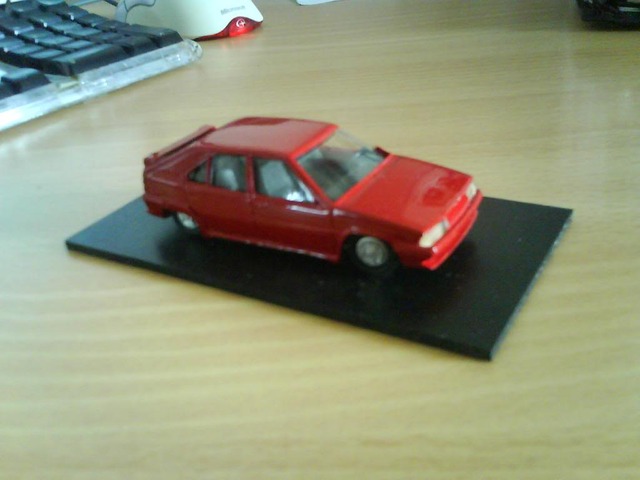 I have also been keeping up with those 1/18 Otto Models, and there is another BX planned for 2011 and some other seriously cool Citroens: 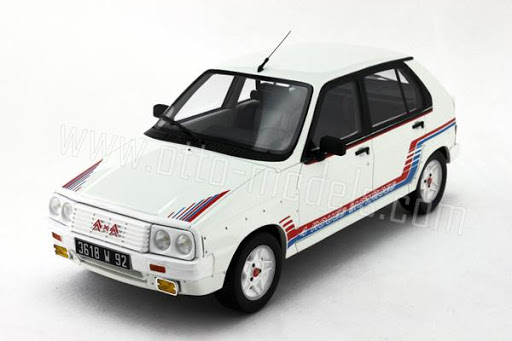 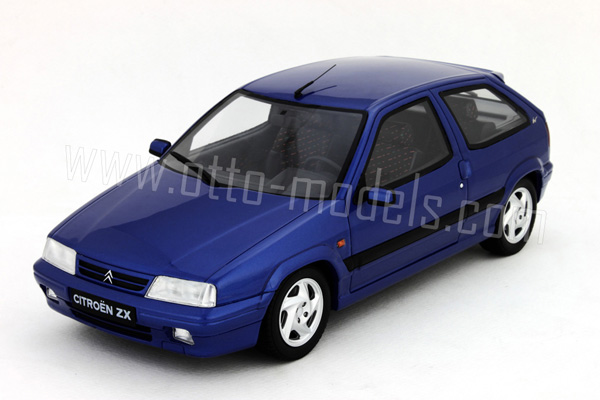 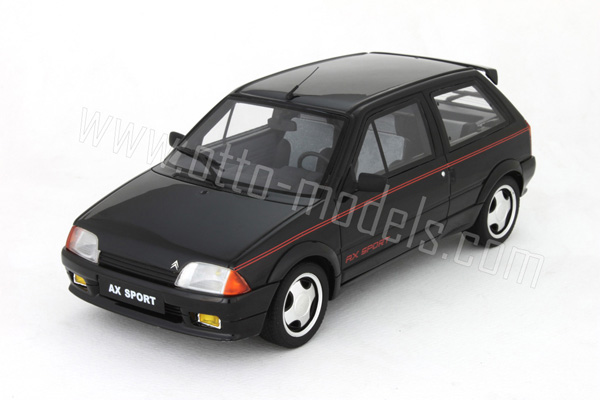 Had a great day out at Santa Pod today... 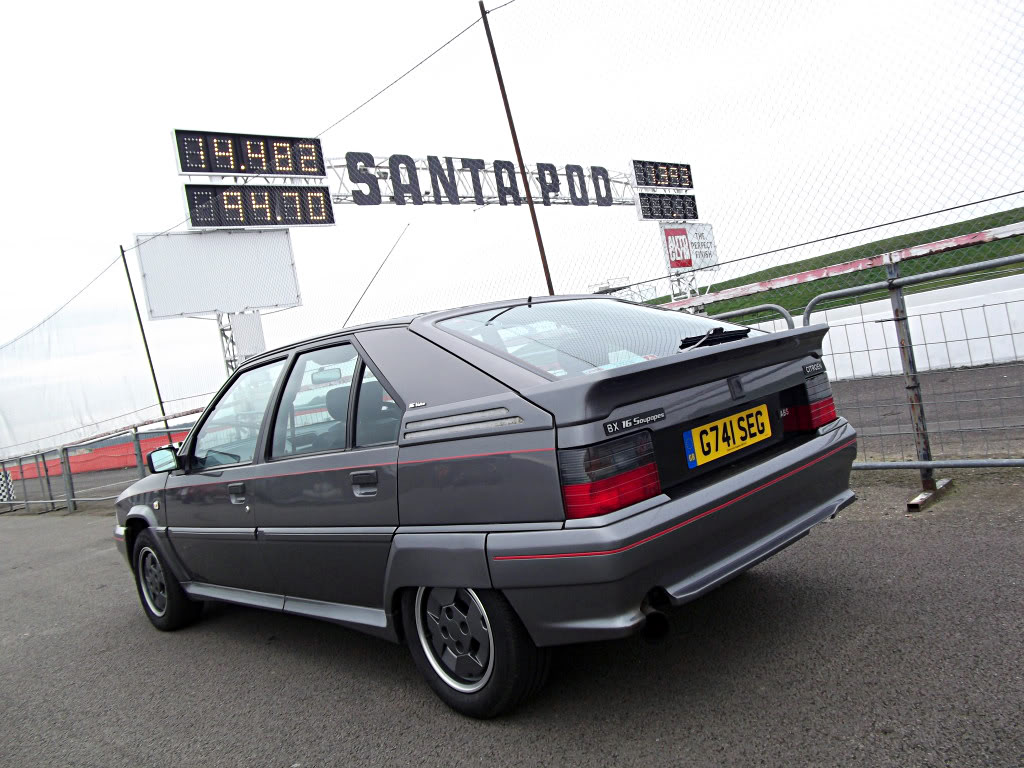 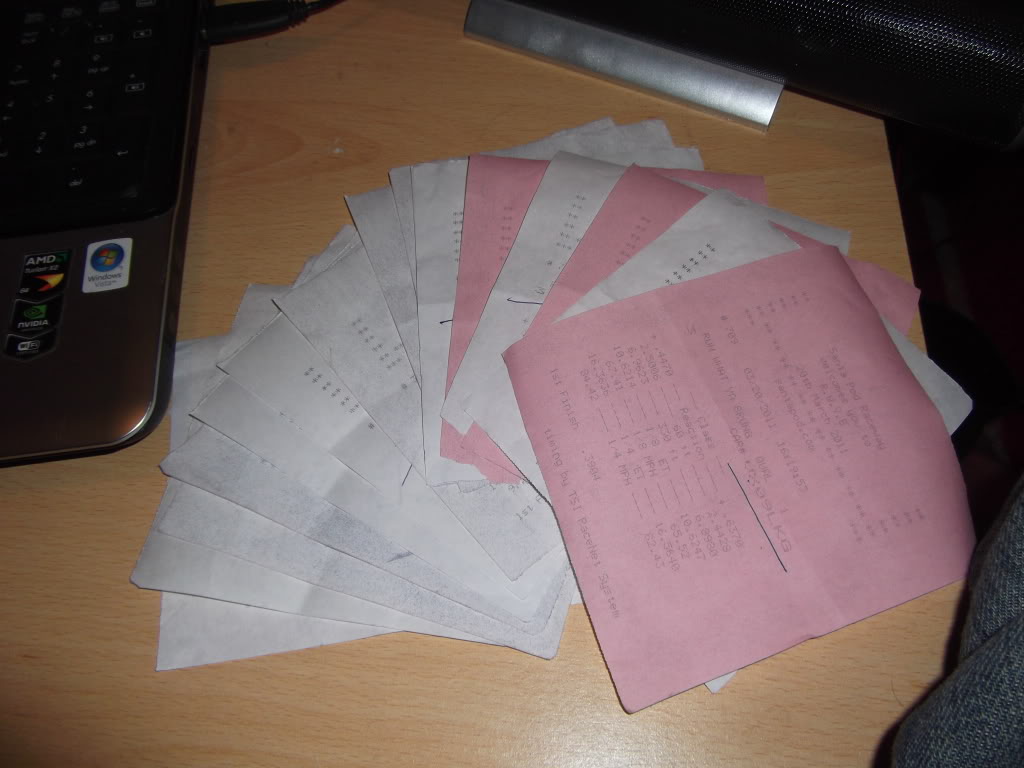 Best time was a snippet under 16.3. To be honest, there's probably about another half second in the car, but I'm not all that fussed. Had a good day, with a few runs, and best of all I didn't break anything

It got some serious attention too. I was approached my about 8 different people just saying how great it was

I've done a 15.4 in mine, but it was a fresh engine, and I'm not sure I'd want to do it that often!
Smokes lots, because enough's enough already!

I think you could make it pretty effective on there for a very small amount of money. Some much harder spheres on the back would help, it squats far too much. Also playing with the gear ratios and tyre pressures. Quite a lot of weight to drop out of a P2 16v too.

Drag racing is something I could never take seriously though... I like corners too much

I just like these events, because you can turn up in any car and have a good laugh with some like-minded petrolheads. I was chatting to a guy in a CL55 AMG. He was really into the BX. I don't know any other place you would get that mix of people and cars.
Top

Did you remove the mudflaps for weight saving!

The mudflaps are off for the short-term, as I got that new set that turned up on here, but I want to attend to a few bits before re-fitting them. All will become apparent in time. Maybe. The plates brighten it up nicely... And I found a place that doesn't need a DNA sample to make them up. I'd usually get them online, but proper fully legal number plates always seem better quality.
Top