does the rear wing on a BX really do anything

Anything about BXs
Messages: 37

does the rear wing on a BX really do anything

......apart from the "plastic" swelling up around the front self-tapper screws, and the paint peeling off .... does the rear wing do anything ?

Does it help in side-winds, does it even reduce drag somehow ?

Or most likely does it just add to drag, so the equivalent on the BX of the F1 DRS is to just leave it off, and if I want to go round corners more quickly replace new spheres with old spheres ?
Top

downforce on the rear wheels of a front-wheel-drive car> Whatever next!!

Compared to my Mk1, with its rudimentary rubber strip across the tailgate, my Athena's Mk2 rear end (number plate and lamps) stays much cleaner when it's wet and muddy (which is much of the time out here). I presume this is due to the airflow channelling created by the spoiler.

On the other hand, I find that exhaust fumes, at certain speeds, are drawn into the cabin on the Mk2, which was never a problem on my Mk1 (1.9GT).
Top

messerschmitt owner wrote:downforce on the rear wheels of a front-wheel-drive car> Whatever next!!

These add ons may seem insignificant but I recall the Sunbeam Rapier, essentially a tuned up Hillman Minx, the series 1 would do damned near a hundred mph and at top speed the tail end would lift almost clear of the road, the series 2 had fins added for the express purpose of correcting this problem, that also was termed as 'just cosmetic' by the trade press. Gibbo

Based on my experience with an XM, it keep's the plot straight and level when you get all four wheels off the road going over a humpback bridge at 80.

Beautiful four-point landing - it's not called a wing for nothing... Haven't assessed the aerodynamic potential on the BX yet, but it does seem to be very good at reducing rear view visibilty. Apart from that, I think the jury is still out.
BX14TE St Tropez 1990 - now sold
Xsara Forte 1.4i 2000
Kawasaki GPz550A4 1987
Top

You normally find as a car gets longer in the tooth things like spoilers, chrome embellishments and decals etc find there way on to the "cooking" models.

Personally I doubt their effectiveness on a day to day basis in normal driving and have never liked "aerofoil" as I think its spoils the lines and hampers rear visibility, great for resting a cuppa on though! 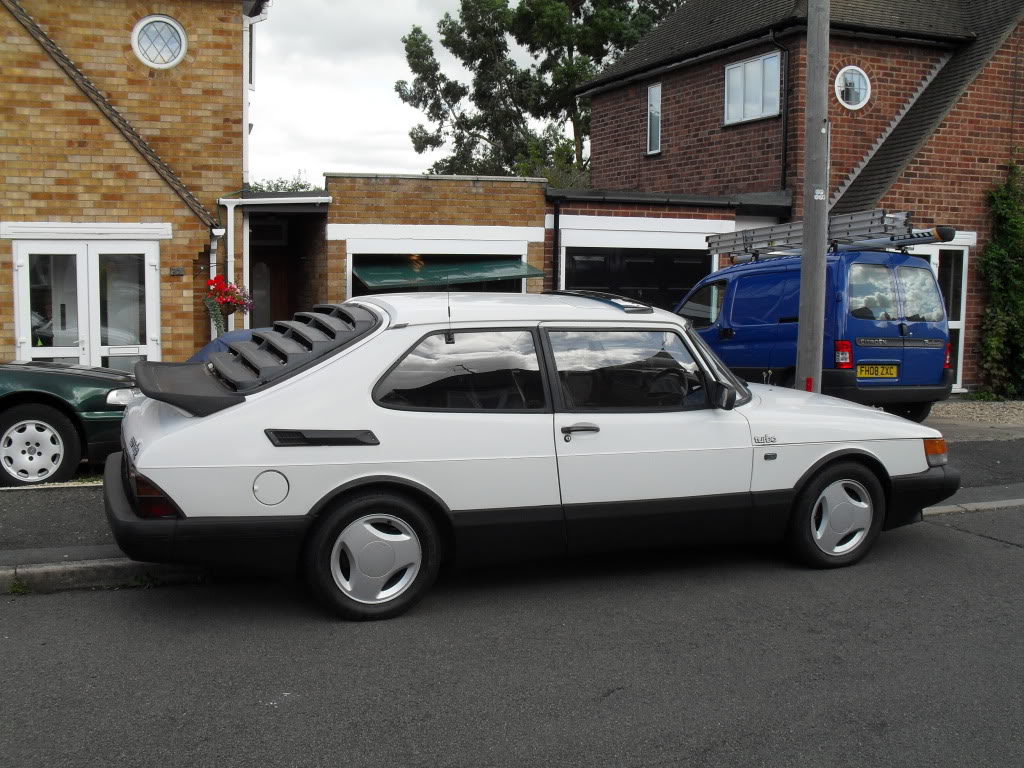 i think the plastic at the front edge of the rear wings is more to stopnstoe chips,

as the MK1 had thick stone guard under the paint at the front end of the dog leg,

john - you need to get that garage door fixed

My thoughts are same as everyone else's, but here's my "angle" (pardon the pun).....

Obviously a wing is just that, an upside-down wing, but the BX wing clearly has no aerofoil shape, so it cannot be for downforce.

However, it is at an angle to the airflow coming down the back of the hatch, so maybe it could push the airflow horizontally and reduce turbulence. According to Wikipedia, a spolier should help reduce drag, so if the "wing" at the back of the BX is not for downforce and is not for cosmetic reasons, then it might be to increase top-speed by reducing circular turbulence in the area by the number-plate
http://en.wikipedia.org/wiki/Spoiler_(automotive)

However, this next link says that a wing and a spolier are both for downforce, so according to their definitions the BX "wing" is neither a wing nor a spoiler, and if it is not cosmetic, then it is a DRS !!
http://www.torquecars.com/tuning/spoile ... namics.php

As well as reducing drag, a more "laminar" air-flow leaving the rear of the car should make it more stable in cross-winds.

I had a 1.6 E-reg in '88 and I remember driving at about 90mph on a m-way in very severe dross-winds when a lot of cars were having issues at slower speeds, and even the BX was twitchy, surprising for a car that understeers so much. But I have never experienced this on the 1.6 Mk2 with the "wing" in place. Obviously the only way to verify this is to keep the "wing" in the boot until I experince this, then stop and put the wing back and try it again, and repeat several times. But how do I stop the rain getting in through the holes .... the best reason for just leaving the "wing" in place ..... and as Roverman says, it is a good cup-holder.
Top

that bloody garage door has been waiting to be replaced for three years now.its on the list...........only freaks of nature over five foot nine crown themselves on it so im not rushing the job.
to get back to aerodynamics-my a8 does 155 mph governed.its steady as a rock in a crosswind at a ton and has no spoilers fitted to the boot.sound design will overcome stability i think.
audi a8 quattro
saab9-5 aero
saab99 turbo
smart roadster
citroen bx tzd
Top

For what it's worth I've never thought the spoiler on a BX will create downforce as it is clearly not an aerofoil. However, because the BX is light - at the rear particularly it is my belief that in creating turbulence at the rear - and there will be a fair amount anyway given the 'cut off' nature of the rear it will reduce the effect of aerodynamic lift on the rear. But I do imagine the effects to be relatively minor - though not adverse - so all in all the rear wing on a BX is basically cosmetic. Of all the wings, I would have expected the Ph.2 16v to actually do something noticeable?
• 1992 Citroen BX TZD Turbo Hurricane
• 2006 Xsara Picasso 1.6 16v
Top
Messages: 37