What does everbody use their BX's for?

Anything about BXs
Messages: 45

What does everbody use their BX's for?

As in the title, would be interesting to know which are daily driver types, which are Sundays and shows only types and then the other type, the moneypits!

Pics also wlecome, preferred in fact.
I'm not a Saint, or a James, but a Tom Saint-James!

But with another poised to enter the fold i shall be once again smoking around in a BX as a daily hack!
I have zero patience for your tedium.
Top

I don't drive daily anymore, as I work from home, but the BX is a car I'll use to drive pretty much anywhere, more so as I get on top of the lengthy To Do list...

Here it is on van duty collecting bits from Mr Roverman. 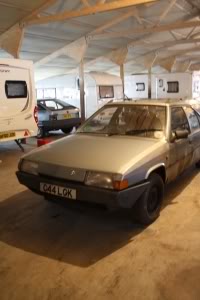 My last BX was very much the daily motor, though it did share that title with up to five other vehicles at various times...

I think hydraulic Citroens benefit from use, and they're joyous to drive. I've never been the 'polish for best' type. Far too much like hard word!
www.classichub.wordpress.com
Top

Every day, only car, mainly used for moving girlfriend's and brother's band stuff around, which means the load space takes a beating.

It gets used for a few longer distance trips (Berlin, Spain, Scotland, and Berlin again this summer), but generally city driving.
Martin

I wouldn't use one daily anymore .... btw I've already had that argument on this forum and don't want it again thanks.

Heres mine next to it's modern equivilent: 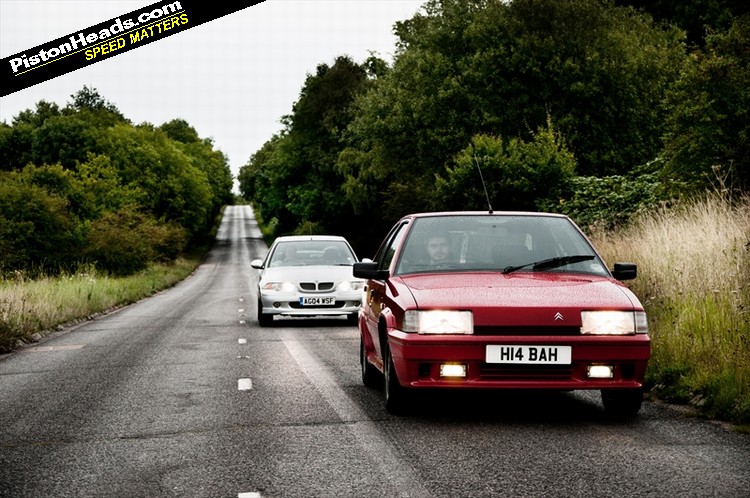 Mine's not a tart, although I am more bothered about trying to keep it tidy than most of my cars, where I generally don't care. But as with those, mechanical stuff is more important to me. I plan to restore this BX one day and the bit I'm more excited by is shot-blasting all the various brackets and components and getting them all powdercoated rather than the bodywork. I only tend to polish it when it's got something on, like that feature or sometimes for a show. Most of the time it's faded, pink, dirty and with a bit of trim hanging off. But it can spruce up quite nicely when needed I'm not into all this originality stuff though - I keep the car as I like it.

Service-wise it tends to have a year in, then a year out. Last year it was my daily and it performed brilliantly but being that I only do 6 miles a day, the economy was pretty poor because it never got a chance to warm up properly. But it often drove around with an engine in the boot staining the carpet, or a tool chest, or a welder, or a set of wheels in. Or even my kids!
I do start worrying after a while about someone hitting it and not being able to find the bits to repair it though, which will limit the amount of daily service it gets pressed into. And then there's the fact that ideally I'll keep it for the long-term, and any daily salt-covered road use I put it through today, I'll pay for in the future with 0.6mm wire and some inert gas. It's a shame, as it's a car designed for all weathers and all jobs. It's not supposed to be a garage queen - as Dollywobbler said, they don't tend to like that anyway. But purely for the purposes of preservation, I will have reign it in a bit from now on.

I think a BX can still make a good daily, but I also think it's better to be a ratty one that you don't care about cosmetically or emotionally, which is becoming a problem as they've just got past that point where they're all doing well to still be here. If I had a Xantia for instance, I'd drive it like a stole it and enjoy not caring.
The national BX register - click to submit a car!

The last BX I had was daily commuter and general transport, until the commute and local work was taken on by a motorbike. The duties it performed included bicycle transport, tow vehicle, taxi and rubbish transporter.

Once the GS was back on the road last year, I stopped using the BX as the GS got used for anything the motorbike couldn't do (transport welding gear, bicycles, towing etc) so rather than have it suffering from being sat, I sold it so that someone else could enjoy it, and I could use the cash for other things!

I was going to write something here, and then I realised Kitch has summed it up very nicely. Daily driver, 50 miles a day for the last 5 years with the occasional couple of months off (like at the moment). But no plans to retire it to weekend use for the foreseeable future, I have another car for spares plus a collection of new parts to (hopefully) keep it on the road.

For me the BX is the prefered drive!

The two petrol ones get little use since the TXD arrived but then when we had just the petrols the TZS was still the number 1 car. In a way it still is just not as much as the diesel TXD.

When you got two runs to work a day or as the case is now taking little one to school as well. The TXD makes economical sense.
Costs of the obligatory twice per year mechanical test and the guvermint charges to use the roads one the BXs (19TRS) has been sat in the garden for the last 3 months since its legality to use ran out. Meanwhile the TZS sits at the back of the garage but does come out on either wet days where the TXD might be left all day in the rain or on the extremely rare this year hot days that aircon may be required

Erm, I dont use my BX's much, although the 19TZD has done more miles in the past 6 months than the rest of them put together. Mainly down to it being diesel and not in such a condition as I wont use it in all weathers, although I keep it clean and leather it off before it gets put away in the garage......

In the nice weather I rotate the useage of the cars, mainly for trips out, car shows and visiting friends but having a new Golf company car which is fully expensed I dont use one of my own cars unless its Citroen related or to visit another "car guy".

At one time my 16TZS was my daily driver, but cost a small fortune and did suffer with the hot starting issues so I sold it for a modern Citroen and regretted it ever since.

mat_fenwick wrote:I have another car for spares plus a collection of new parts to (hopefully) keep it on the road.

What I mean is that with a spare BX, if I need a part desperately I can just swap it from the one that's not in use, and then replace it at leisure. I.e. rather than waiting for a part to be ordered in if it's not quickly available.

But if I had to chose just one to keep on the road, it would be the red one simply because of the time I've owned it and the miles I've driven.

At 184,000 miles the Hurricane is coming off the road (and having a new door at the moment as some scumbags broke into it) while the TGD is taking up the slack as my daily drive. When that gets too nice/rare/long in the tooth to use daily, I'll have to buy ANOTHER one!