'Ere we go. For pity's sake don't mention 14s when Tom's around; it just starts him off dreaming impossible crazy dreams! Haven't you got enough on your plate young man!?

Quite enough thankyou Paul, but is that ever enough?

And here's me thinking i've been a really good little boy recently and got on with BX things without so much as a peep about 14's...
I'm not a Saint, or a James, but a Tom Saint-James!

We've all got eyes bigger than our bellies round here Tom - join the club!

There were some bloody lovely 14s there though.
Top

I LIKE the preview model, lovely interior. I think the herringbone lets down a good TGE. TE sounds interesting, would that be TU or 159 (suitcase)? Preview and TE.
I'm not a Saint, or a James, but a Tom Saint-James!

Sorry NOT a preview but (rarer) Leader so will be a suitcase engine, the TE will be tu powered.
Lots of Motors, mostly semi broken....
Top

Very rare TGE Safari there Mike - all it probably needs is a tickle with a MIG welder - bosh - good as new!?

I went over to the Hurricane today to give it its weekly workout and start getting it ready for a major overhaul I'm hoping it's going to have over the next couple of months. It stood to attention at the first time of asking which I was rather pleased about; if it's not in constant use the front struts can be a bit reticent about getting out of bed (know the feeling).

The rear door shuts have held up pretty well - it's over two years since I did those (how time flies! 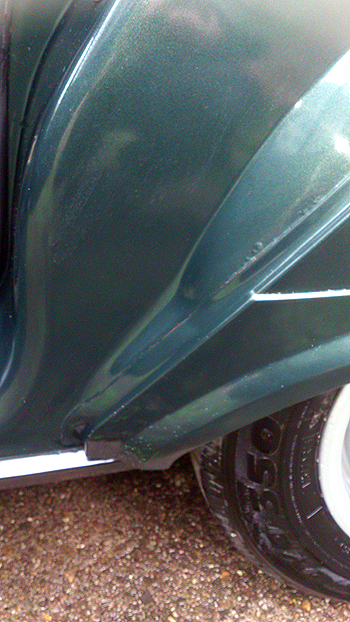 the main job was to get the centre handbrake console out as I have a new one and had promised the old one to Andrew for his TZD. Problem is, they're different

. The one I took out (the correct one) has some sort of plug between the headphone socket that's absent in the new one - it's also a different shape. The plan now is to de-bond the new hand-brake rubber form the new console that doesn't fit and Araldite it into the old one that does. Anyone know what that plug is for between the headphone sockets? 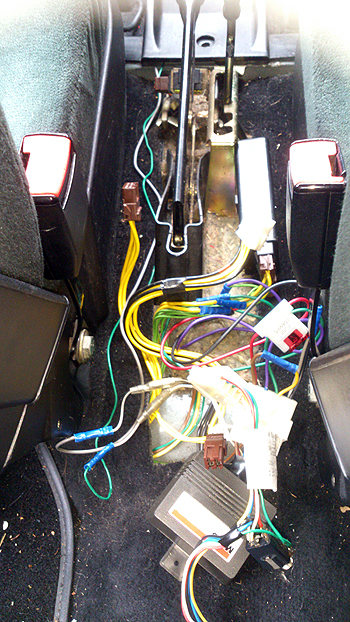 ) Could I have dislodged something in all that spaghetti inside the console or has it just spontaneously stopped for some other reason? Also, there's a great big Moss car alarm box in there that's jamming things up (you can see it at the front of the photo). Can that be easily removed or will it stop everything else working?

I also tried to remove the tail-blazer as I'm about to fit a new one and fit the old one to the TGD (when it's had a slightly more invisible repair). Solid as a rock unfortunately - I didn't have a hair- dryer with me to soften the glue so it stayed - any tugging and the whole thing would have gone tits up. All in all a completely fruitless afternoon

The central locking module is to the right of the handbrake lever in your photo - worth having a wiggle in case the connector has become dislodged although I've expect it to require more than accidental force.

If the Moss unit isn't an immobiliser I'd be confident you can simply remove it...suck it and see?

Cheers Mat - I've sussed the problem (I hope) re: the central locking after a short (well it was quite long actually) phone conversation with Mark. Initially I thought the DIN socket was a screw hole to release the console, stuffed my screw driver inside and it all went a bit 'sparky sparky' - I assume I've blown a fuse? (whoops

The problem with the ‘suck it and see’ approach is that it requires a certain amount of electrical knowledge to dig oneself out of the hole that one will inevitably dig; I still have to look at the little paper diagram every time I have to wire a plug!

I wonder whether a more flexible adhesive than Araldite (maybe Sikaflex) would be best to stick the rubber on with?

Blown fuse seems most likely - I think they share the same fuse. Regarding the Moss box, I was assuming it simply had a plug in connector you would temporarily remove before tidying the rest of the wires. If you Google the model name that may give you a clue whether it's an immobiliser or alarm; alternatively you could post up a closer photo of the box and wires - I'll see whether any of the wire colours jog my rusty memory!

I can confirm the fuse is shared with the central locking. Also the interior lights. 10 amp I believe!
1991 Citroen BX 16v
Top

Mmmm think I've blown a fuse haven't I? I think Sikaflex would be better actually Mat - it makes it (at least seem) like less of a bodge as well! It occurred to me that the reason the new console doesn't fit is that seeing as I bought it on Leboncoin it could well be for a left hooker . . . quelle surprise!