Tell us about life with your BX, or indeed life in general!
Messages: 663

I have been very much enjoying toddling along in the GT over the last 10 days, unsurprisingly a few niggles have reared their heads as it is back in use after a 5 year slumber! The most dramatic was a hydraulic leak, in the same place as the one I fixed on the TRS, it got quite bad quite quickly - in fact on the way home from my last night shift the LHM level got low enough for the warning light to come on, a surprise as it started as just a small infrequent drip. The pipe in question was the end of a metal pipe that connects to a rubber T piece, part goes to the LHM reservoir and the other part to the FDV/security valve - the third end i'm not sure - it goes under the central under-engine support to the rear, steering related perhaps? Not only was the metal corroded and snapped but the rubber ends were perishing there too. 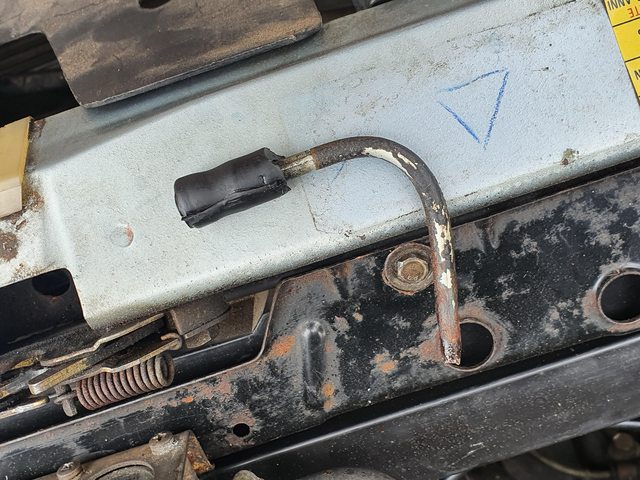 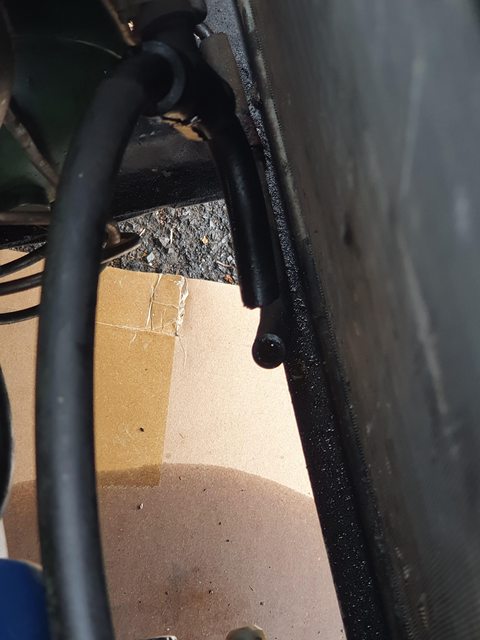 A trim of the affected rubber, a new rubber hose section, in-line pipe connectors and new pipe clips has seen the leak fixed - if not the tidiest solution. I looked up the rubber pipe, Chevronics have something that looks about right but it is either £108 or £180! So I can live with the untidy £22 fix I think.

Other items that needed attention are the aux belts, both the HP belt and alternator/ac belt needed tightening up a little; squeals now solved. The distributor was leaing oil out of the bottom, dripping off of the lower retaining nut - the reason being it had no oil seal at all! I fitted a NOS distributor before the challenge as the old one was damaged but apparently didn't check to see if it came with an oil seal - I couldn't;t find one easily online so I whipped the old one off the broken dizzy and put it on the new one, hopefully that is that, if not I at least have one to measure and search for.

The GT has never been an easy starter, the autochoke consumables were replaced with a NOS autochoke kit I found on leboncoin ages ago. However, the thermoexpandable probe or 'sonde thermodilatable' was of a slightly different length than the old one hence the lack of reliable starting. The car would always start, but then stall immediately. The choke flap is closed when the engine is cold but doesn't seem to open quick enough, so the engine stalls unless you press on the accelerator to keep it going, this though puts in more fuel than the cold engine can burn properly until it warms up slightly and evens out, hence a small amount of black smoke. With the air filter hose off the carb top and being quick enough, I could manually open the choke flap with my finger a small amount from a cold start and this allowed the engine to idle without throttle application, not practical but interesting nonetheless.
Today i refitted the old probe and housing to see what difference the extra length made, it actually made it worse! The car does not now start at all without throttle, the engine was slightly warm at this point so I will let it cool down again and see what happens. I may end up putting the newer, shorter probe back in and seeing if I can adjust it.

New on the left, old on the right. 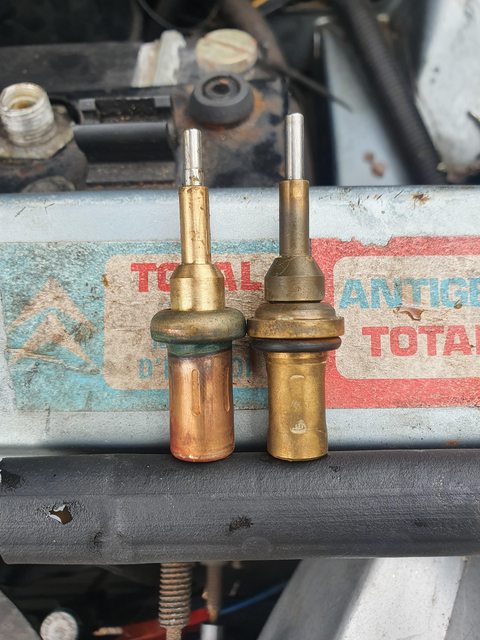 New on the right this time. 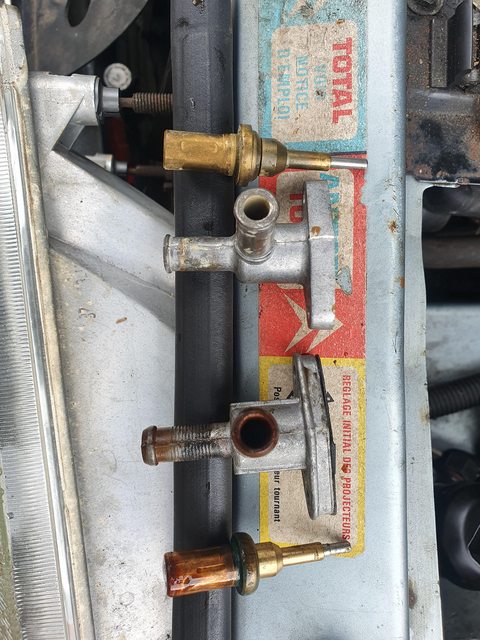 I'm looking into steel wheel refurbishment too, the outer rim is quite corroded, previously the TZ trims hid the lip of the steel wheel - but the GT trims do not and it is really bothering me!
Last edited by saintjamesy89 on Mon Jul 25, 2022 4:39 pm, edited 1 time in total.
I'm not a Saint, or a James, but a Tom Saint-James!

Newer, shorter probe refitted and the adjustment made to around 27mm between the bottom of the roller and inner top of the casing, it was just below 25mm before. The car starts with a little throttle pedal and within a second or two idled by itself. The newer shorter probe was audibly working, the idle decreased as the engine warmed up whilst I was standing there - so that is good news. I'll monitor the cold starts are over the next few weeks and see how we go.

I adjusted the idle when it got up to temperature aswell (post-fans on), it was around 900rpm which seems a bit high. The book figure is 650 +/-100rpm. I adjusted it to about that, the needle sits just above the one in this picture, just above the line on the tacho - I know this is a MK2 cluster, but it has the same tacho markings below 1000rpm for illustrative purposes. Hopefully this won't affect the cold idle, there is another adjuster screw for that so we shall see. 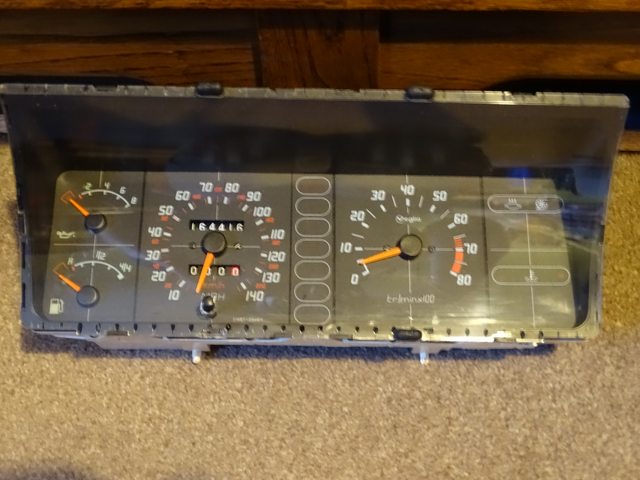 The last BX item for today are the front spheres, the front suspension feels a bit too hard in comparison to the back, I thought it was just sticky struts but that doesn't seem right. I looked into sphere regassing and/or pressure testing and without buying expensive kit, it is a bit of a trek to get them checked! Pleiades and Chevronics seem to offer pressure testing, a long way for me near the south coast. So it worked out cheaper to get some IFHS comofort spheres - fingers crossed for suppleness! Curiosly the comfort spheres are the smaller 400, belwo - comfort spheres fitted and old for comparison. 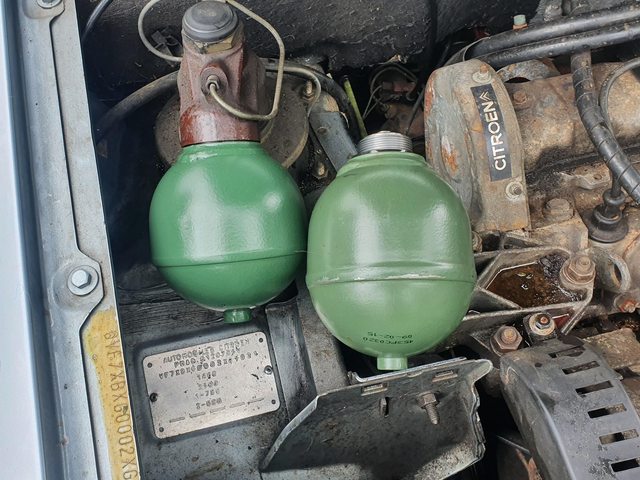