I had a set of Bridgestone 56 and 57s 120/60 17 and 160/60 17 on the Nordy and didn't like them in the wet. The had good grip in the dry but no feed back at all so grip, grip, grip, slide, oops throttle off a bit in the wet. The Pirelli will tell you and start 'crabbing' across the road before letting go. Once did an emergency stop in the wet on a manhole cover with the Nordy on Dragon GTS (Pirelli) slipped about 2 inches and gripped like hell. Well it was either brake or hit the front of a turning Transit!. BTW if you want to know what a NordWest looks like try this link

You can scrape the footrests on the road...I used to have to lift my foot off the pegs sometimes...
Oh and mine is that pinky/purple and white, mmm lovely.

You might try upping the pressures, there is sometimes a lot of variation between manufacturers even at the same size. I've had 10 psi difference between Michelin and Pirelli before now on the Nordy and it makes quite a lot of difference. It might also help because your probably not quite as light as a teenage 125 rider

That may well deal with the rolling resistance. I am fairly sure Pirelli used to use higher pressures than Bridgestone too.
Last edited by Tinkley on Fri Oct 11, 2013 8:32 am, edited 1 time in total.
Top

I'll try adjusting the pressures - I generally run with the back set for a passenger anyway, as I'm the size of 2 people!

That's a nice looking bike, although not my first choice of colour scheme.

If you are painting the bumper can you tell me what plasticising additive is needed for spraying/painting the plastic BX parts. I understand it is a normal 2k mix but with 10% of a 'plastisizer' added as well. I will need to replace a damaged front bumper - thanks Fiesta that did it in a car park and drove off without leaving note..

Also I assume you need to add it to any undercoat/primer. I have PPG Kobe 5:1 which I normally use as an undercoat. Any info would be good, don't want it (paint) peeling or letting go from incompatibility.

I didn't get a choice of colour with the Nordy, it was a pink' un or none. Of choice I would probably have gone with the two tone blue one. I put a grey seat on it a bit later when it wore out and that worked quite well visually.
Top

I gotta talk to the paint specialists about the additives needed - a guy I used to know in the trade told me about an elasticiser, but that was for 2k that I can't spray. If I can't get it mixed in celulose or acrylic I'll probably get a local paint shop to do both bumpers together (I have a NOS mk1 front to go on too!)

Changed that knackered bearing on the rear shock of the Vara last week, the old one came out in bits with the help of some suitably sized sprockets, a vice, a big hammer and a lot of swearing! 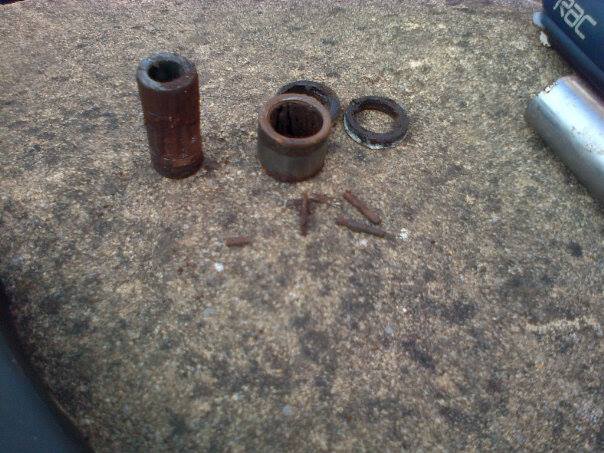 The new bearing went in a bit easier: 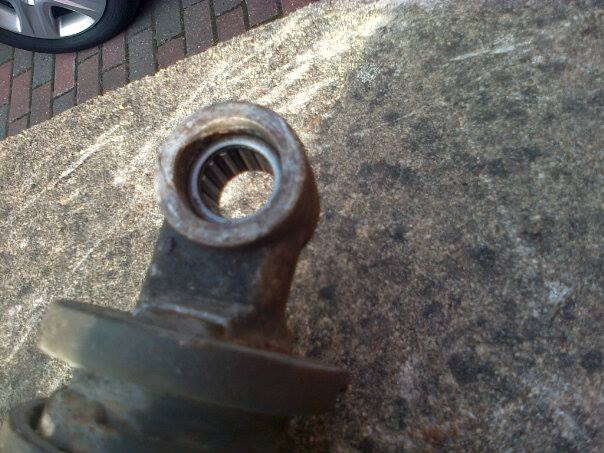 Followed by the seals and plenty of grease: 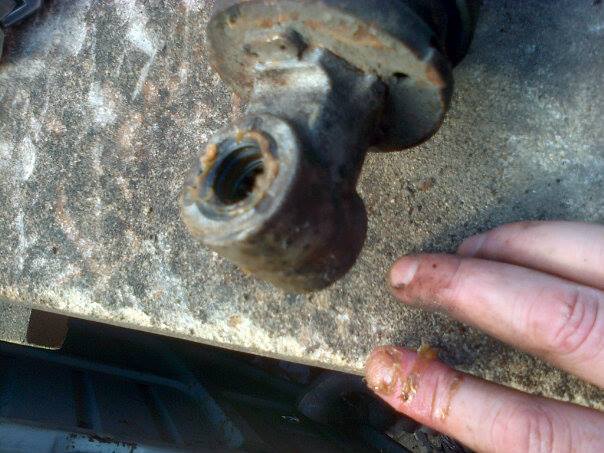 Finally the inner bush went in, again with grease, before it all went back on the bike: 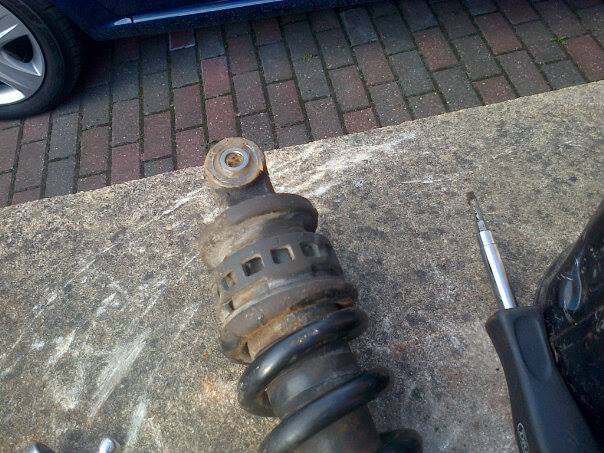 The result - well not much really, it's taken the play out of the bottom mount obviosly, and I suppose it may be slightly smoother but not really noticably. It doesn't creak though!

I have wrapped a neoprene bicycle chainstay protector round the bottom mount in the hopes of protecting it. After a week riding to work I'll have a look at it tomorrow to see if it's doing the trick.

In other news, I've picked up a radio for the 4x4, oh, and I must contact themildbunch about some wheel trims he has (and a wing he's been looking after for me for months

For those have not seen it elsewhere Timex is getting a new friend - Fred the Mk1 17RD!

This is one of a few factors that is leading to me being about to book Timex in for some work at Tony Westons' place in order to get the MOT sorted on it. I've suddenly realised that in slightly less than 11 days Timex is booked on a ferry to Ireland. Of those days, I'm at work for 4, there's a day retrieving Fred, and 1, maybe 2 days rearranging the barn in order to reach my brothers '59 Westfailia splitty, which he's decided to sell. Factor in weather and the general state of the car in question, ad I'm about out of time! Current plan is to get as much done as possible this Sunday, hand it to the Westons for whatever's left, then hopefully get a new ticket on it by next Thursday (so I can take it not the bike to collect the transporter).

Did you get Fred home?
Lots of Motors, mostly semi broken....
Top

Good luck with the collection Mike, i have just made all the final arrangements to get Wilma on Saturday morning. Not looking forward to such a long tow but at least i will have a mechanic with me and if he cant get her started, no one will.

So miracles still happen - after less than one day in the hands of the Westons, Timex has a new MOT!

Well done, Timex lives on and deserves to in your capable hands. Long may she live!

I'm sure I will witness this legendary machine in the flesh and look forward to it.
Top

I look forward to the piccies of the trip Mick, there will be a few of mine available on Saturday, including some of the lhd Estate which will be on ebay very soon. Might even be tempted myself!!
Top

I'll pull some pics across from Facebook when I'm on a better connection, but in the meantime, Fred's back home and tucked away nice and dry. Certainly saveable, but in no particular order there's a list of jobs to do:

That's the minimum. I'm also looking out for wheel trims (I have a couple, just need to make up the set), a back bumper (yes, you can all stop laughing now), and maybe a set of seats in a suitable finish) 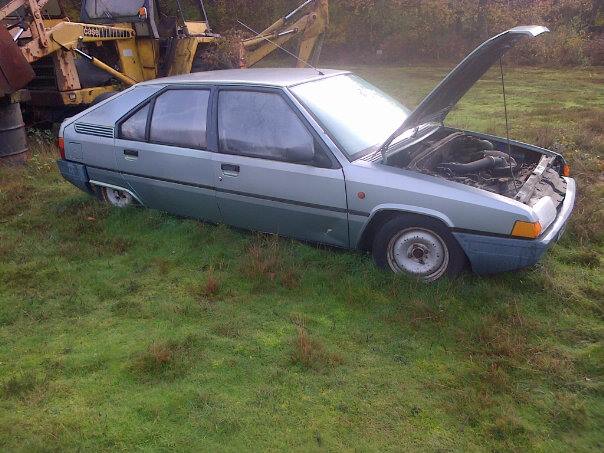 Lots of spiders under the bonnet, but luckily Fred's escaped the rat problems that Wilma has! all looks original to me under here, and apart from under the drivers side washer bottle there's no rot either. 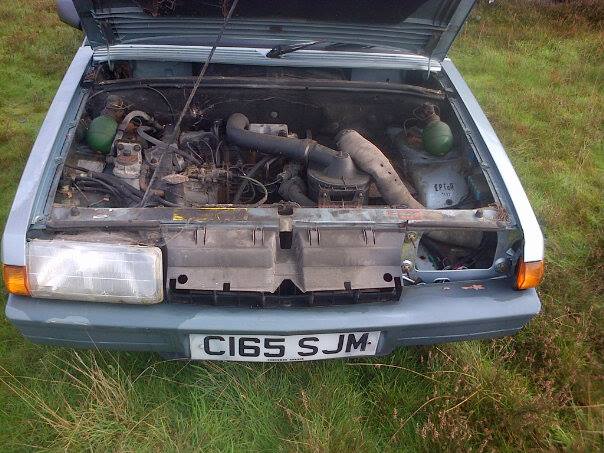 Except for the tatty seats, and the moss growing in the passenger footwell

the interior is pretty good. I noticed that the demister vents for the doors are blocked off (just above the side vents), I've seen this before, but don't know why they did it. 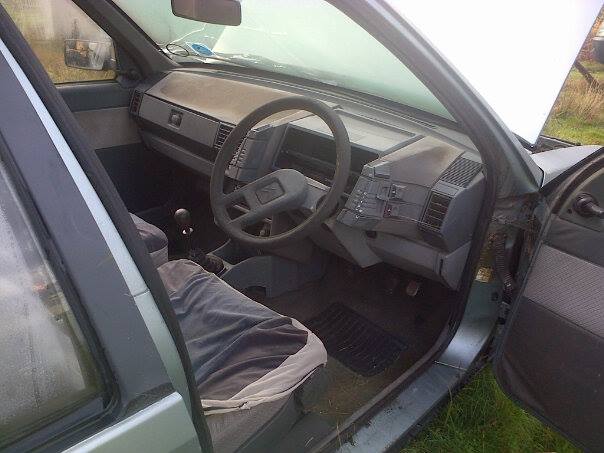 I'm hoping that the rear seats will scrub up, but if not covers will do the job for now. 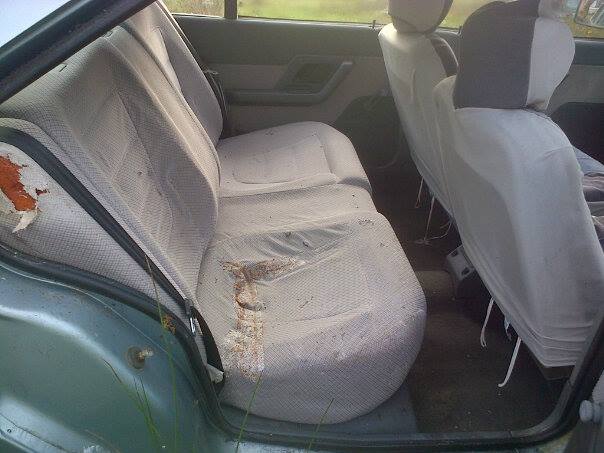 View from the tailgate (which needs new struts!) Although the rear shelf has been cut for speakers, they're period items and with my preference for sound systems in my cars I will probably keep it rather than try to find an uncut shelf. Poking around in the back has revealed the rear corners of the boot floor are crunchy, and I have my suspiscions about the exhaust hangar, although the tops of the arches seem ok. 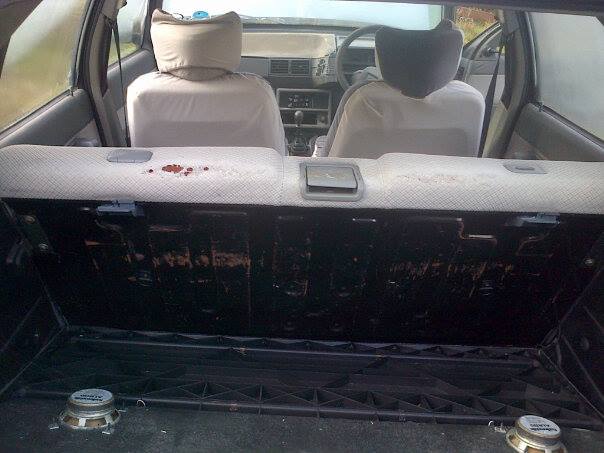 Pillars need a bit of work, but I've seen much worse! 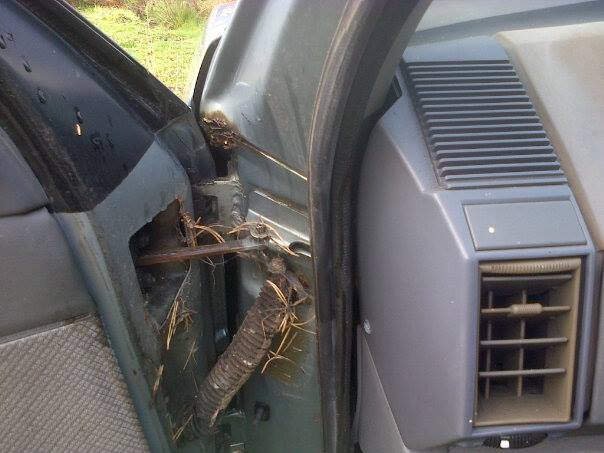 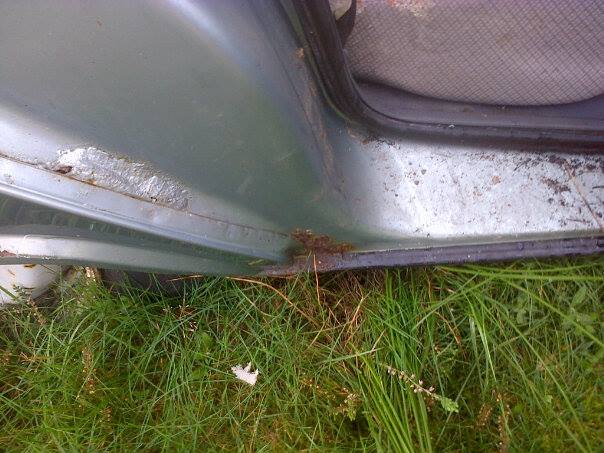 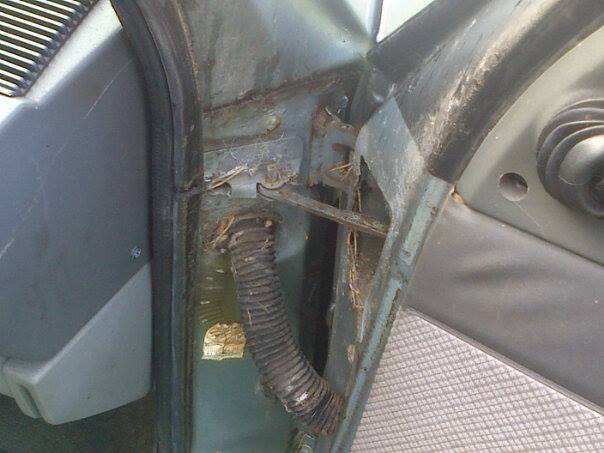 Windscreen is shot, and the passenger pillar will need work at both ends before a replacement is fitted. The screen rubber is the later pattern with the curved top corners, so I'm guessing that it's already been replaced at least once. 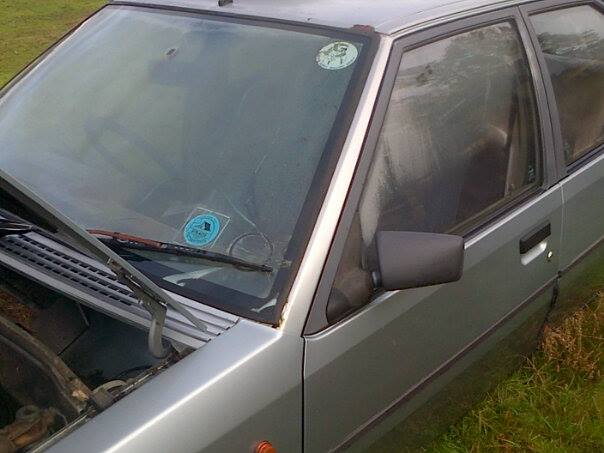 The trip home was uneventful, if wet, although getting Fred unloaded was interesting, as he'd got well and truly wedged - just because a car was winched onto a truck, it doesn't mean it'll come off again, although with a bit of rocking, jacking and tyre inflation, he was eventually parked up next to Mitch. 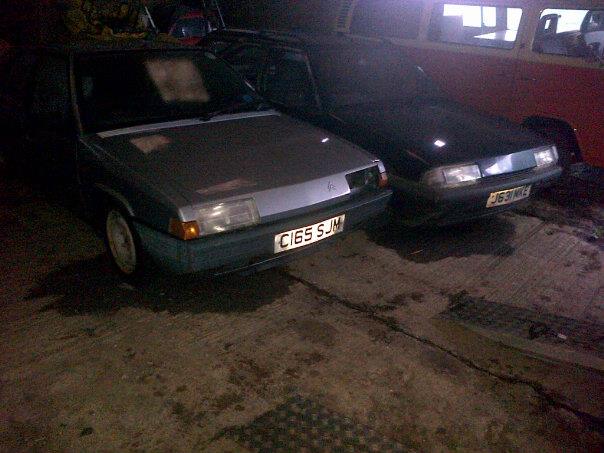 In other news, I managed do drive Timex over a traffic island in Pembroke Dock, the only casualty being a tyre (now replaced), plus the sump collected some new dents. And tomorrow and driving halfway across Ireland to meet up with Kieran and have a look at his collection of BX's - it'll also give me a good idea of the road conditions in the part of Ireland I'm hoping to take next years Challenge through.
Mike Sims
BX 19RD Estate Mk1 - Timex!
BX 4X4 Estate - Oh god, I've done it again!
BX 17RD MK1 - it called to me!
BX14 TGE, - SOLD
XM Turbo SD,GS Club Estate,Visa 17D Leader,HY Pickup,Dyane Nomad,Dyane 6,2CV AZL,Falcon S,Trabant P50,3x Land Rovers (88" series 1,109" series 2a FFR,series 2a Marshall ambulance),DKW F7, Lambretta LD150 x 1.5,Mobylette SP93,Ural Cossack,Ural M63,CZ 250 Sport,Honda Varadero 125,lots of bicycles & tricycles including (but not only) Sunbeams,Higgins & Bates!
Top
Messages: 382