You all know dollywobbler's stripey BX, you can read all about its story thus far here: viewtopic.php?f=13&t=11244

Since everything is all in line to get the car to me on Wednesday I thought maybe I should fill up a bit of time by starting a thread on it, even though I don't have it yet. Up until very recently I've had a Maestro as my daily and while it's been a reliable little donkey of a car, it's not kind to my back and it falls short of some of my needs in a car, such as load carrying, so I needed to replace it with something. I was planning to stick with BL and get a Maxi or an Allegro estate to keep my Princess company but then I noticed the advert for the stripey BX which I've had an eye on for a while and with the price it was offered at I thought it would be foolish not to.

I'm under no illusion that the the car is anything other than in need of some TLC, but the history available about it online reassures me that the work needed isn't beyond what I can do and afford and that the car is perfectly rescuable for what I need. I don't do huge mileage every year, but I do have a few long distance runs so I should have the luxury of time to work through the various issues with the car.

My primary concerns are getting the car's niggles resolved as quickly as I can, particularly as it might need to do a couple of quite long distance runs soon after me getting it. Then I'll turn my attention to the bodywork and get that rear corner sorted out, it's not severe enough to scare me off and it looks like a relatively straight forward repair.

Other than that, I'll be cleaning it to within an inch of its life, because that's what I do when I get any car. It will probably get some Saab three spokes and it may or may not get a bit of extra black on the back end, but mostly I plan to keep it as Citroen intended because the BX is a very good looking car to begin with. Something a bit like this.

This will be the first diesel car I've owned, but not the first I've driven. I think my expectations are realistic about comfort, handling and power and compared to a late 'Ledbury' Maestro (Google it) it should be positively refined. The important thing to note is that I've wanted a BX since the nineties but never thought I'd be in a position to own one. Okay, so I wanted a black hatchback with red trim and a white estate is about as far away from that as you can get while still being a BX, but that doesn't matter to me so much as I will, very soon, be the unfeasibly proud owner of a BX and will have realised a childhood dream.
Last edited by vulgalour on Wed Aug 07, 2013 12:30 pm, edited 14 times in total.
Top

I think you'll enjoy the BX. Where a Maestro is just dull to drive, a BX feels much more fun. The PAS is one of the best (when it works - it behaved entirely last trip out!) allied to that super ride (it's more comfortable than my firmer Turbo Diesel).

Driving an NA diesel is an unusual experience. When you get to 3000 revs, change down. Going higher up the rev range won't make things any quicker, just noisier. The torque curve is so flat that low revs is the way to go. I look forward to seeing it develop in your ownership. Having seen you resurrect the Princess, I think you've got what it takes.
www.classichub.wordpress.com
Top

Hmmm. Wish I'd know that trick before! Was looking a photos of the BX on the BXagon in 2009 and the bumpers were spotless.
www.classichub.wordpress.com
Top 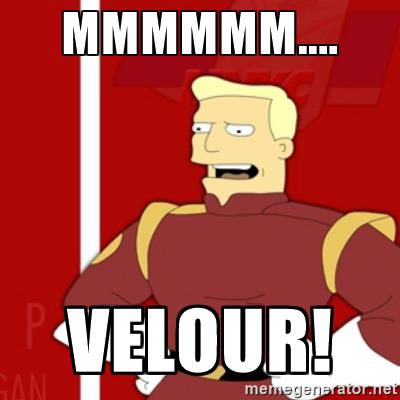 FrTed wrote:Yay VA - welcome to the dark world of hydropneumatics.
Im sure its going to get detailed to a very high standard if the Prinny is anything to go by.

How about a Harlequin edition BX? With red velour trim.....

Here one Phil made earlier

(Photo from THIS thread) ! 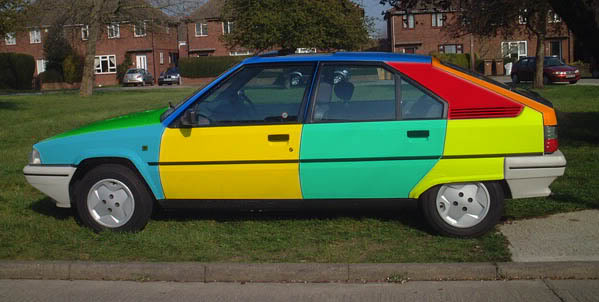 I've been pondering that idea for my TXD, but I think just getting the bonnet resprayed makes more sense!
www.classichub.wordpress.com
Top

Oh dear. It really is a stripey saga. Car was collected at half two today on Vulgalour's behalf. It's made it as far as Shrewsbury but is now running out of power. I've suggested priming as much as possible and seeing if that improves things. Bother! I've never sold a car of fail before.

My only thought is that either the fuel filter is clogged or it's got a case of jelly-in-the-tank. It had half a tank of (fresh) fuel when it left here, so it can't be that it's just run out.
www.classichub.wordpress.com
Top

I wouldn't worry, it's not like you gave me your home address so that I can turn up unannounced and exact my revenge... oh wait.

It's Wat I feel sorry for, what a pants day he's had with all of this!
Top

Though he did volunteer! I mean, expecting a £250 22-year old Citroen with a lengthy list of faults to drive perfectly well for 160 miles would be considered absolutely madness by non-car enthusiasts. Mind you, I bought it for £266 (first time around) and expected it to drive over 3000 miles around France. Oh, hold on. It didn't manage that either... (still has the eight euro second-hand replacement bottom hose though. A sound purchase!)
www.classichub.wordpress.com
Top

It'll be tomorrow before I really get a good look at what's wrong, I'll probably get some photographs anyway. It's not an adventure if there isn't adversity to overcome (he says, from his comfy chair).
Top

I did the job last year - I noticed a crack starting when I was changing the heater tap so thought I'd better sort it before getting stuck somewhere with a loss of power...

I could tell you all the story of how this came to be parked outside my house. But it is quite late and my brain has stopped working. Instead, here are three photographs taken at 2am in the rain-sleet of a car well known in certain circles. 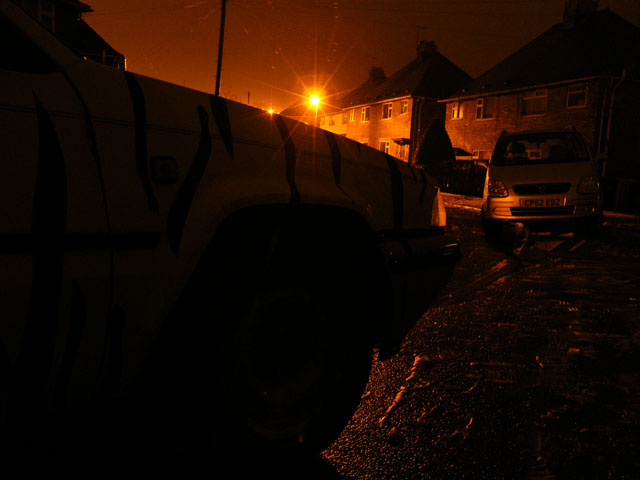 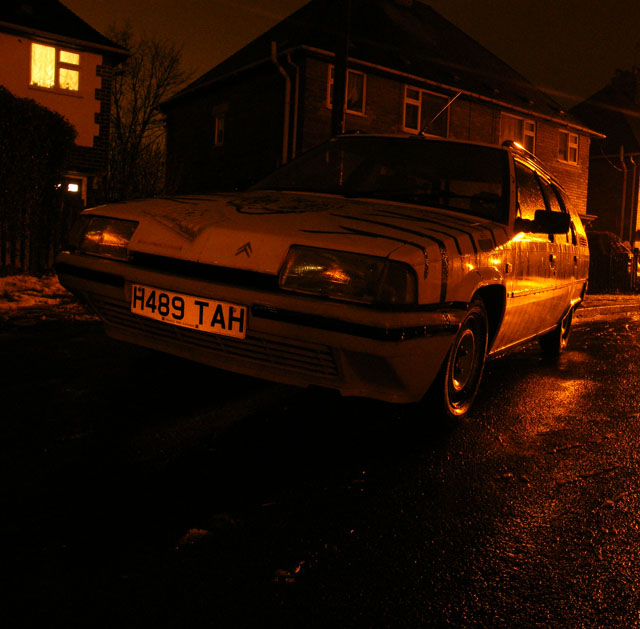 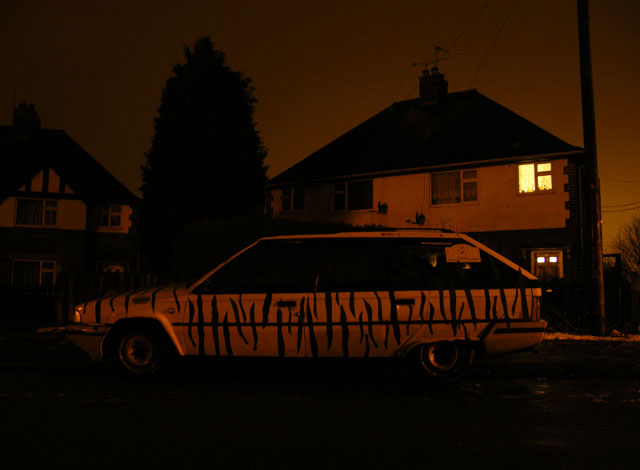 After the sun has risen I shall provide you with more information, but for now this shall have to suffice.

I don't know why my photographs are not showing... see them here: http://s845.photobucket.com/albums/ab16 ... roen%20BX/" onclick="window.open(this.href);return false;
Top

Daylight beckoned, I ignored it for a while because my bed was more comfortable, but I did finally haul myself out of my cave to get to work on the BX. I wasn't exactly nervous about looking at the car in daylight and I was sure I'd like it but there was a little bit of doubt as to whether or not I'd done the right thing in replacing the trusty old uncomfortable Maestro for this tatty Citroen. As it happens, I think I have made the right choice. The car is far bigger than I remember BXs being, but no less comfortable. It's all thanks to those superb tweed covered seats really.

The driver's seat, as is normal, has seen better days. It's still comfortable and works, but the plastic trim and head restraint are broken, I need to look into how to fix them. This is just how the car was before I got cleaning and really, apart from storage mould and a bit of tree scaff, it's not that bad and should clean up very easily. 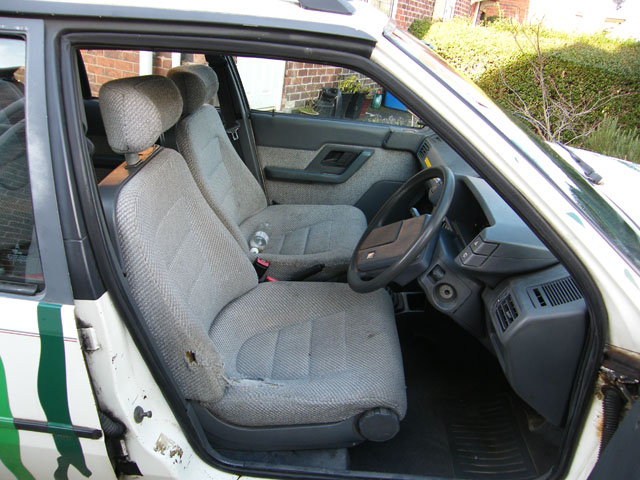 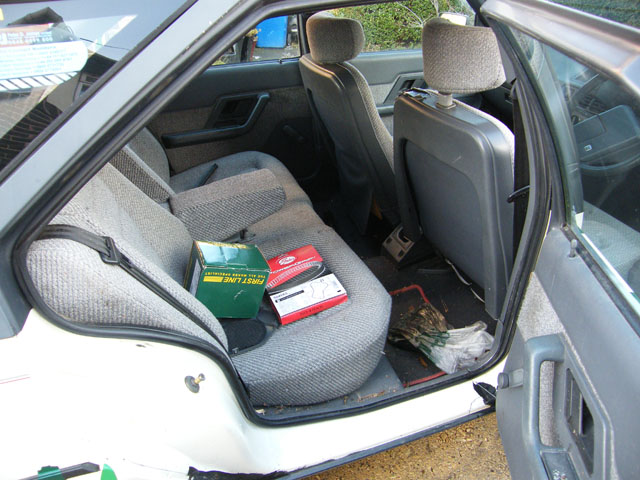 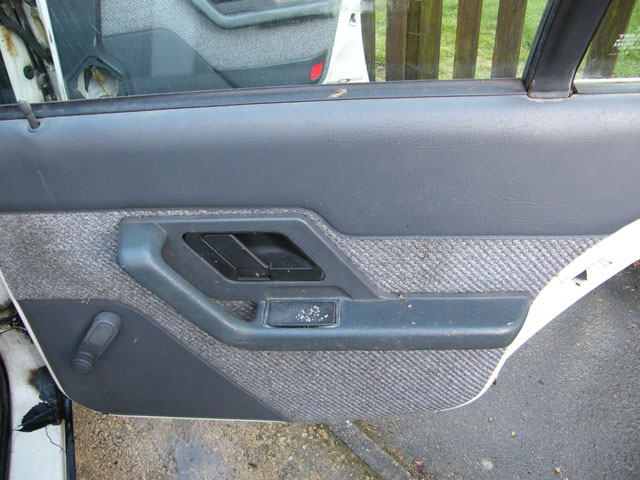 This is the only bit of extra rust I've found on the car and it looks far worse than it is thanks to it being wet and on white paint. 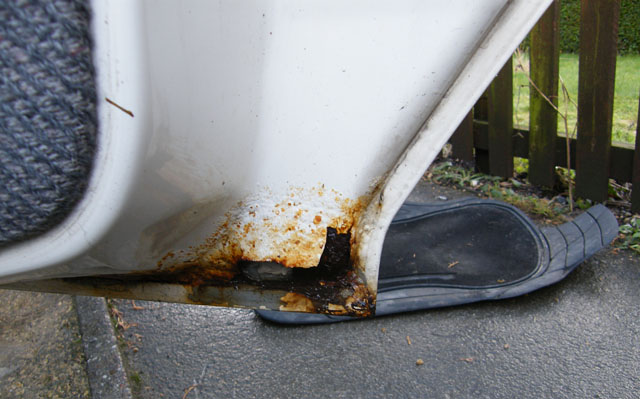 The luggage area is vast, and full of bits of tree... 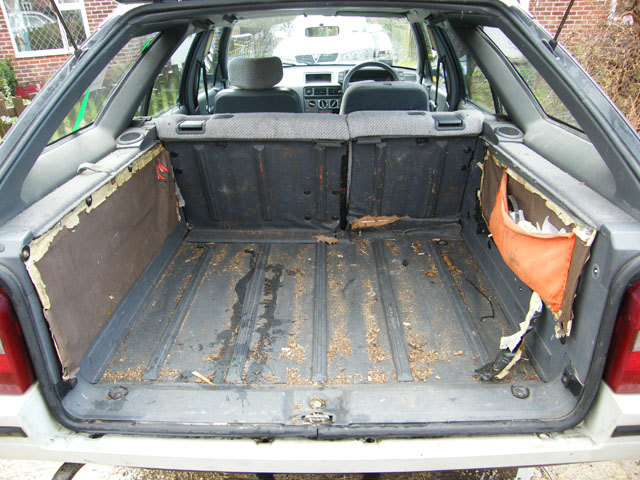 ... or it was, at any rate. Took only a few minutes to vacuum it out. I removed the improvised covers from the sides too, it all looks very tidy and should just need a quick scrub to freshen up. 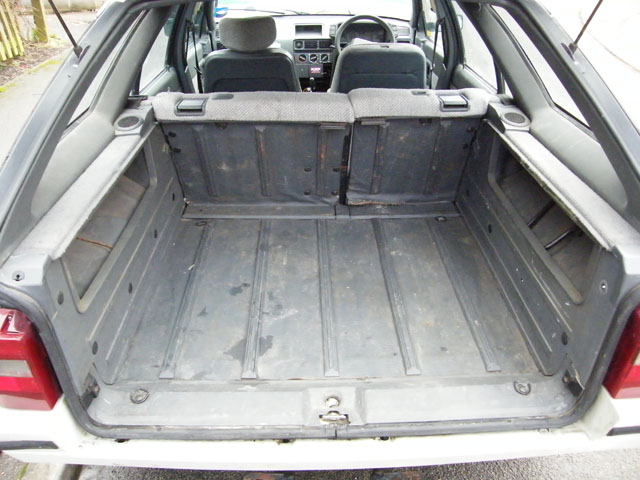 After I'd had a bit of a poke about I got on with destriping. The stripes are making a reappearance in the future, but I'm keeping just how I'm doing that under my hat for now. I moved the extended life sticker from the window to the rear pillar, looked tidier and I like it as a sticker. Completely decluttered the rear window too. 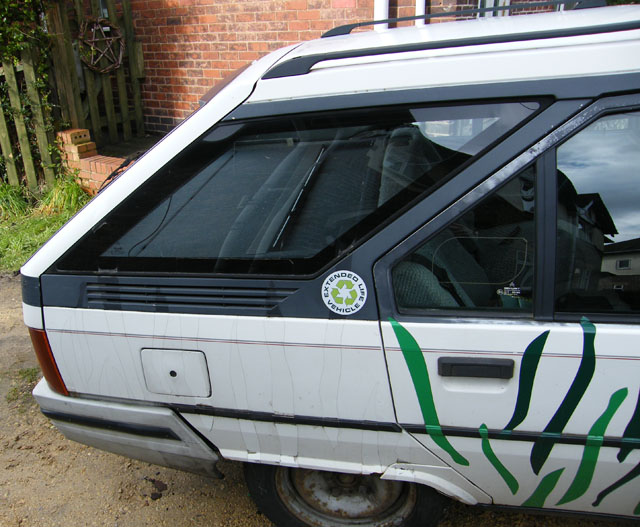 Made a start cleaning up the rear end too, mostly just a declutter of the glass. I've kept one or two stickers like the witch on a broom and the Vehicle Watch sticker, but the rest will go. 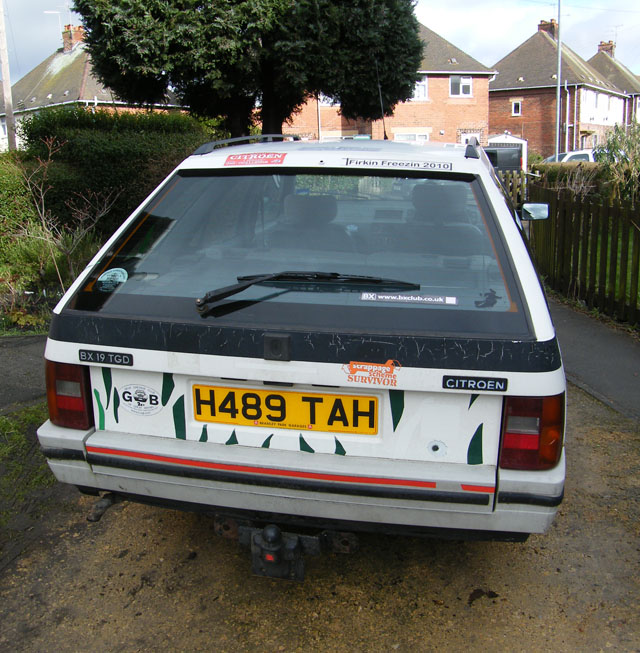 I was, of course, putting off the inevitable which is to investigate that rear corner, the worst spot on the car. Not as bad as feared, actually, there's still enough metal for the bumper to hang on. It also looks far worse because of the colour and the vinyl. 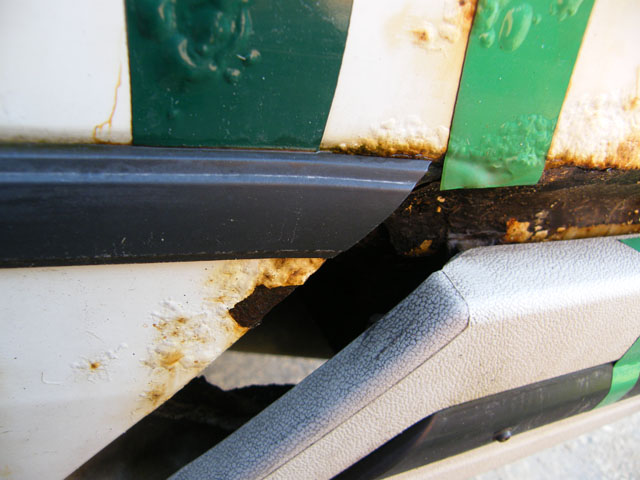 The rest of the spat is fairly solid too, just needs a tickle with a flapwheel and some fresh paint. 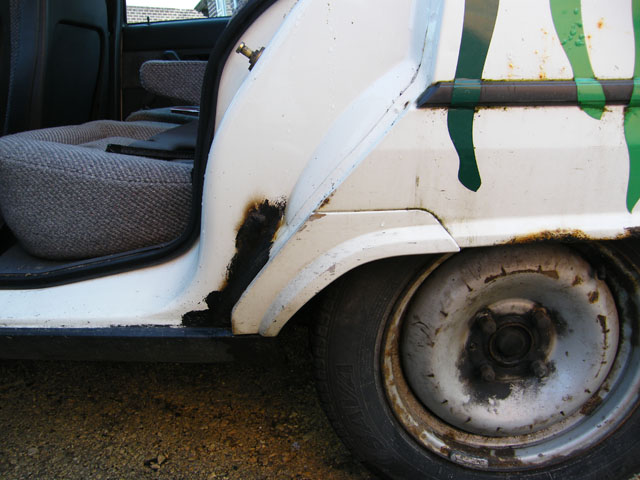 It's hard work removing the stripes, mainly because they were put on quite well, so I haven't removed everything. I did get enough stripes off to get on with tidying up that crusty rear arch. 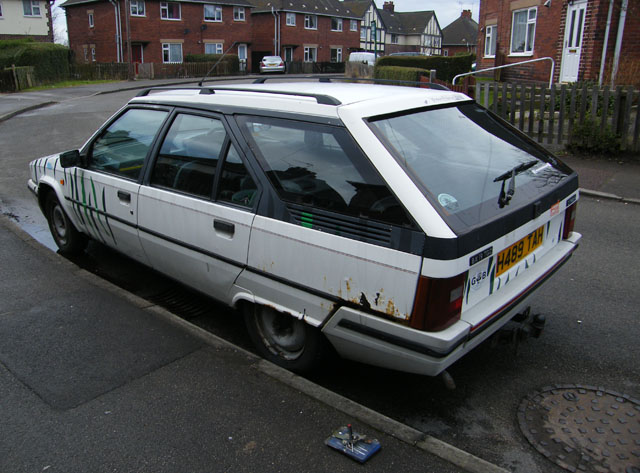 After a clean, I tried just using a clay bar to get the paint uniform and remove the shiny-matt finish from the stripes being on for so long. 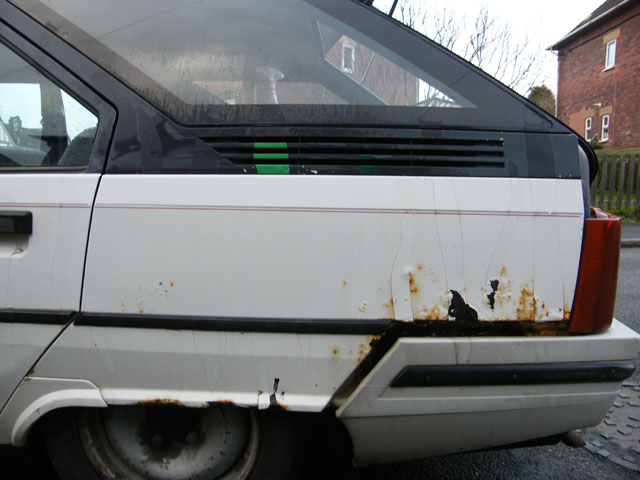 Instead, I got the Farecla G3 cutting compound out and tackled the panel with that. Much of the rust staining disappeared, as did the ghost of the stripes. 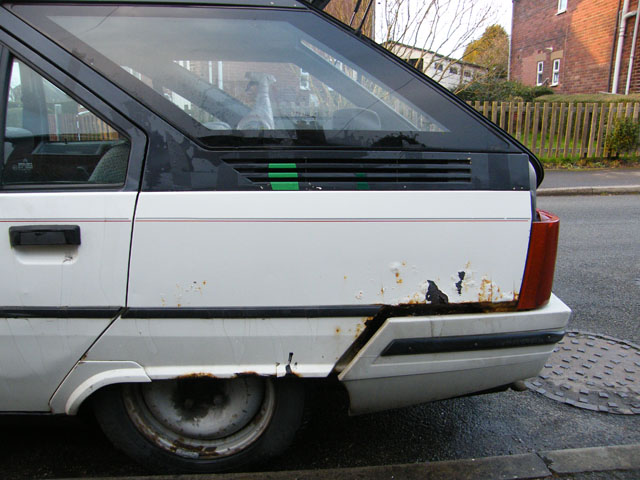 Another attack with the clay bar after this gave me much better results. 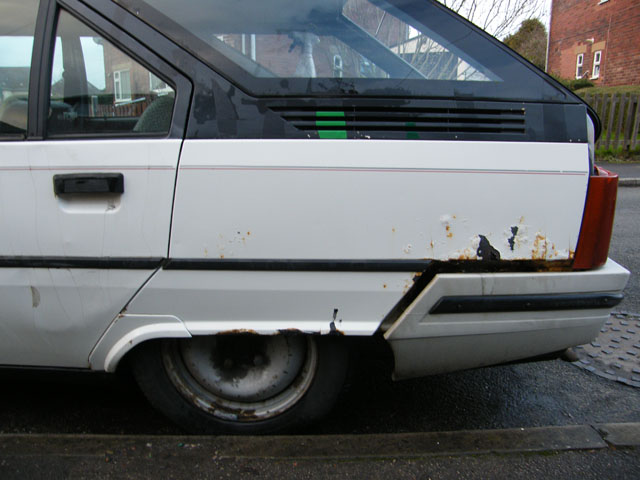 A final go over with the Farecla G3 to bring up a bit of shine revealed a panel that isn't anywhere near as bad as it initially looked. 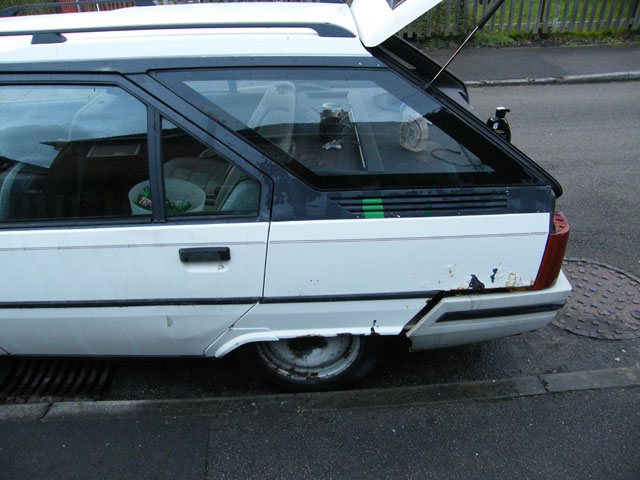 I'm optimistic about how this is going to turn out. There's some tar spots and some localised surface rust but nothing really serious save that back corner which isn't as bad as it first appeared. The only serious problems to resolve at the moment are the broken pedal box and trying to stop my electricity escaping.

I have no idea what's going on with Photobucket, all the above pictures work fine on other forums I'm using
Top
Messages: 196