Admins - is there a limit on word length or filepaths that's preventing the links from working?
www.classichub.wordpress.com
Top

No, it's the autocorrect changing Citroen to Citroën! I've disabled it now...

I feel bad for causing that.
Top

I wouldn't worry. It's caused other problems I think. Just remember Alt and 0235 and you've got your ë manually!
www.classichub.wordpress.com
Top

Right, I've been having trouble with the electrics which, for some reason, seemed content to run away. First thing to do was get to the scrap yard and find a car with the same bulbs, taking a multimeter to ensure they were useful. Found a Peugeot 205 GTi that looked like it was probably a very nice car before the driver's seat caught fire somehow and wrecked it, the car even had an exterior sliding glass roof and what looked like factory red carpets, I was impressed. One whole pound got me a fistful of useful light bulbs. 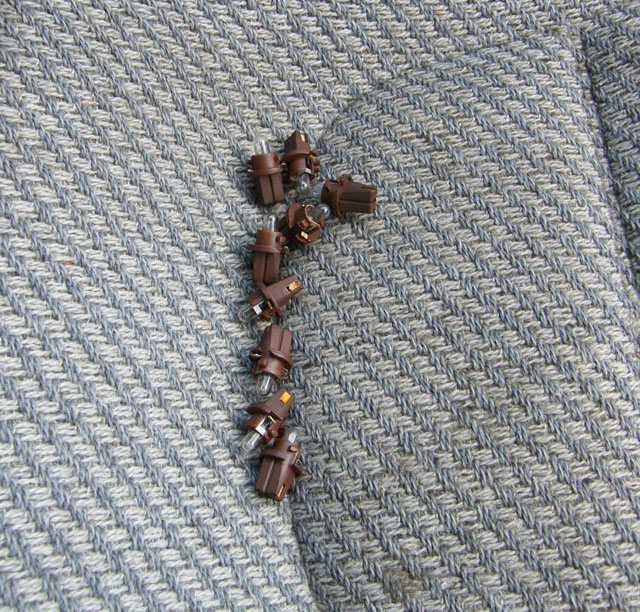 Then it was simply a case of removing the binnacle and changing the bulb, yes? Well no. I'd already had this apart before going to the scrapyard and tested the bulbs to find that the battery telltale bulb had blown so was likely going to need replacing. As it happens, the replacement good bulb - I've swapped with other good bulbs too, for good measure - doesn't illuminate either so I don't know what's going off here. Anyway, this is how you change a dash light on a BX, hope you never have to do it. 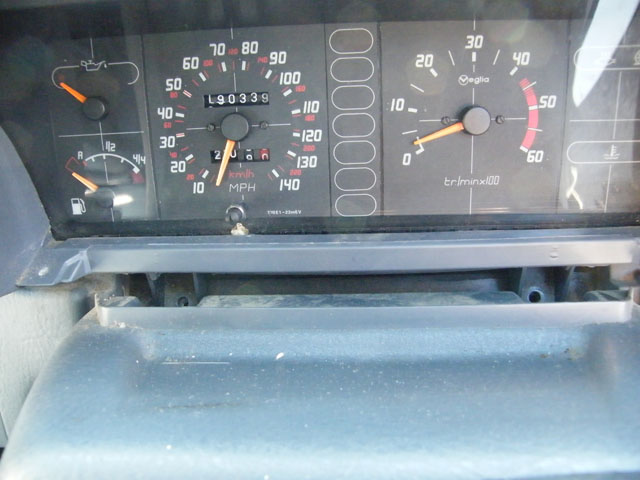 Then, remove the two torx screws from the clock dash tray so you can remove that. 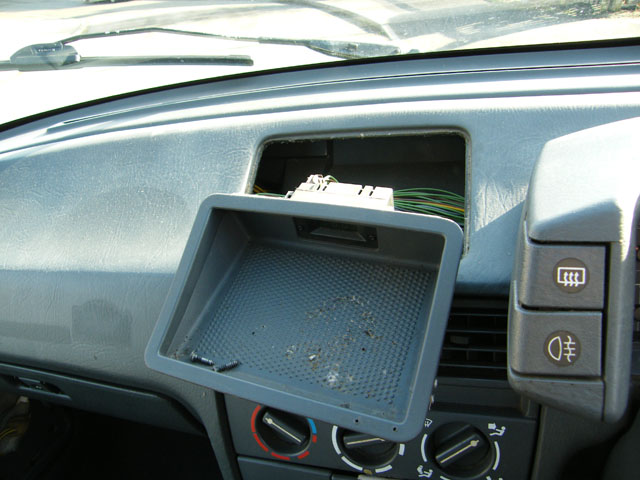 This allows you to get your hand in to find the plastic wingnut that you can't see to release one side of the binnacle. 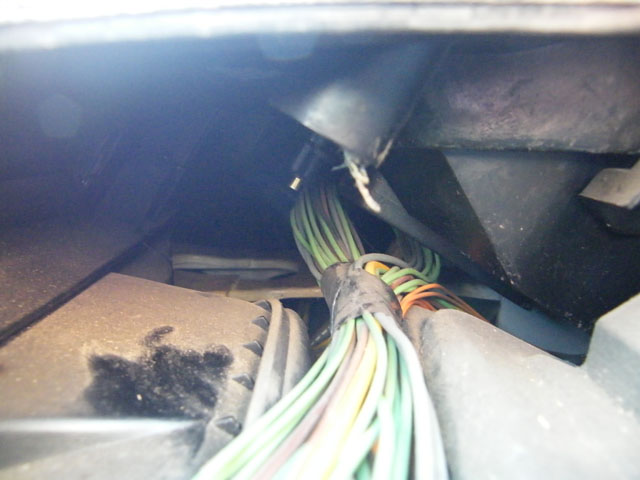 Then, you have to pop this trim/switch plate off to get your hand up into the dashboard and undo the other wingnut that my hands are just a tiny bit too large to reach. 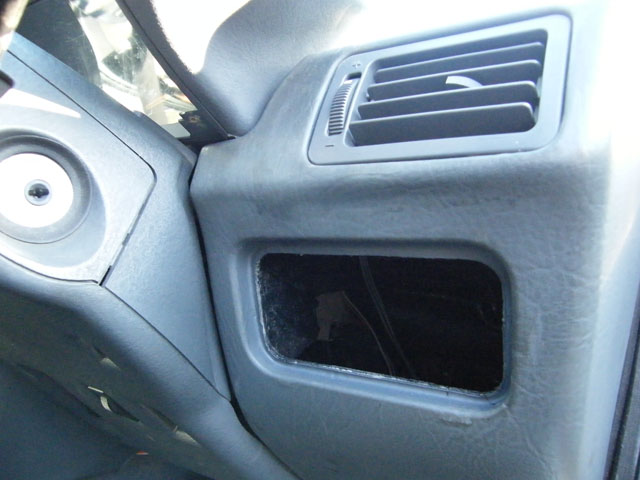 That allows you to move the binnacle forwards a bit so you can get behind and release the lightbulbs, but you can't see what you're doing without disconnecting everything (not about to do that!). 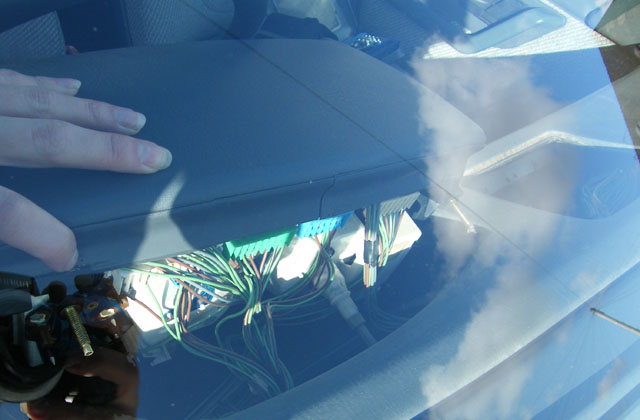 I'm not looking forward to the refitting of all this after that. I think it's probably the worst, most convoluted job I've ever had to do on a car. After all that, replacing the bulb made not a jot of difference either! That's because the problem, as it turns out, was with the earth. The earth plug (on the green wire) was not connected to the alternator and now that it is, the car charges and starts perfectly normally. Tick time is vastly improved too, up at around 15-20 seconds rather than the 8-11 when the car got here. 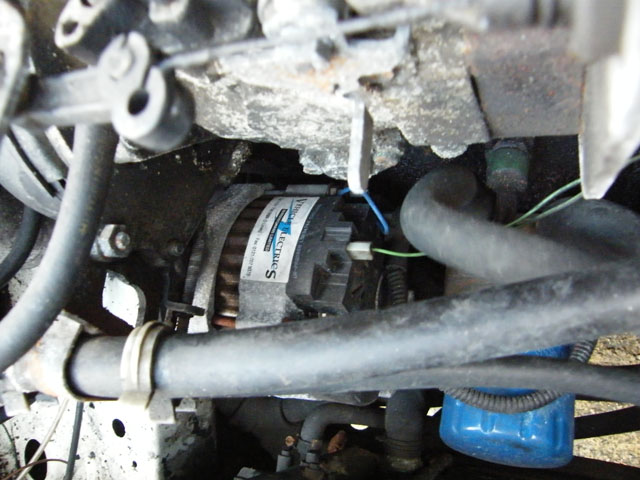 Finally managed to get a picture of how the pedal box is broken. Looks like it's split both above and below the pedal which is now impossible to operate with your foot and the car has to be driven very slowly on the clutch only. 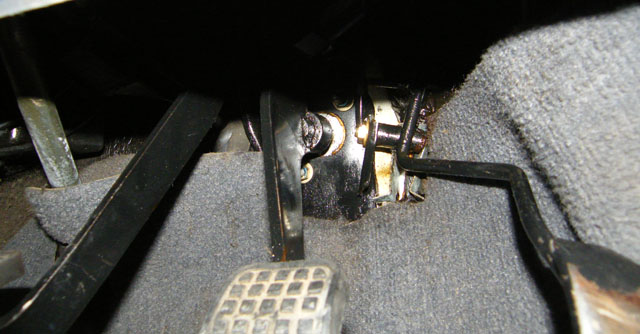 I am pleased we reinstated the interior lights in the car, they're one of my favourite features. 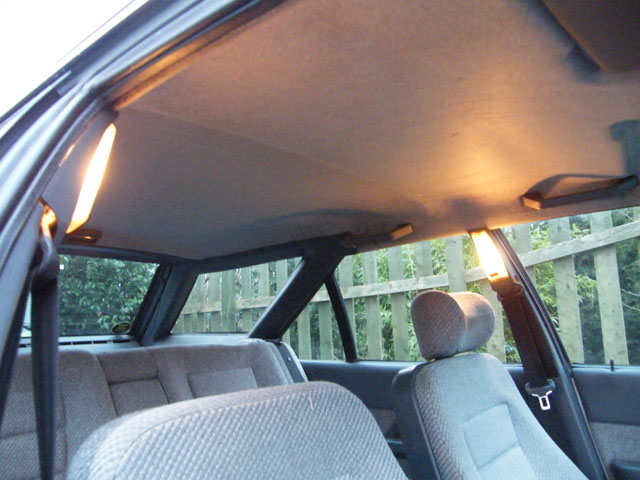 In other, less frustrating news, I managed to completely desticker the flanks of the car. It's looking very clean and tidy with just a few small areas to address. 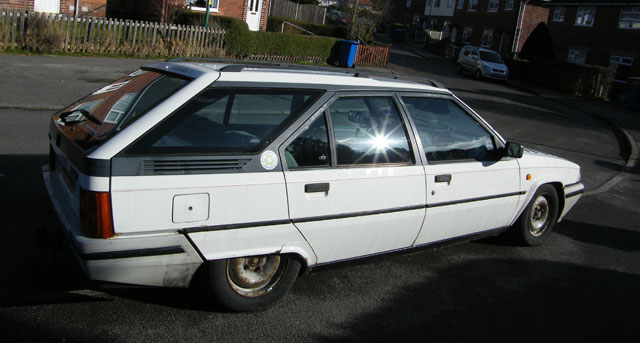 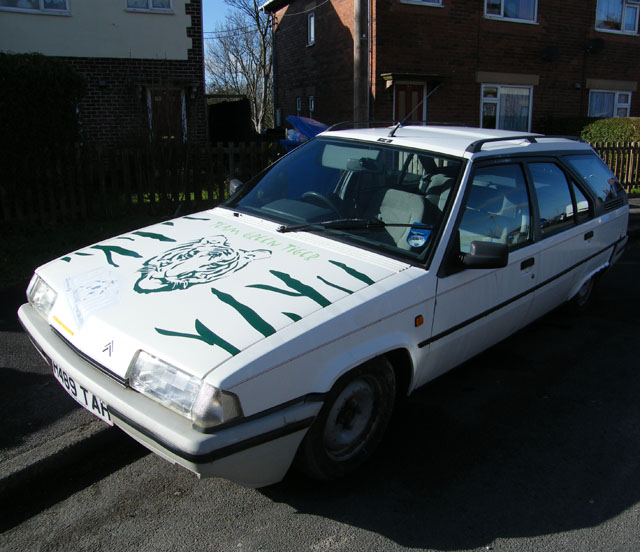 The bonnet is going to be cleaned, but I'm leaving it as it is. I plan to fit a long nose (no grille) bonnet instead as this one is broken. The tailgate was the only other thing that didn't get destickered as the feel of finger nails on painted plastic was too much for me to carry on, horrible sensation! 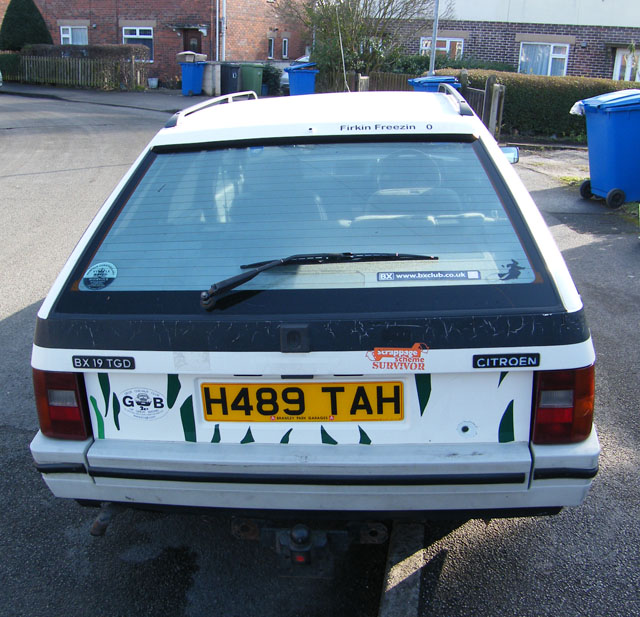 Removed the rubber bump strips from the bumpers, they were very tatty and held on with an assortment of screws. Gave the bumpers a clean before hand but I need a different cleaner (got some notions) to really get the ingrained dirt and diesel out of the plastic. That's why there's a bit of a tidemark on them. The recess that the bump strips were in will likely get red reflective tape on the back and white on the front for that proper old man spec look. 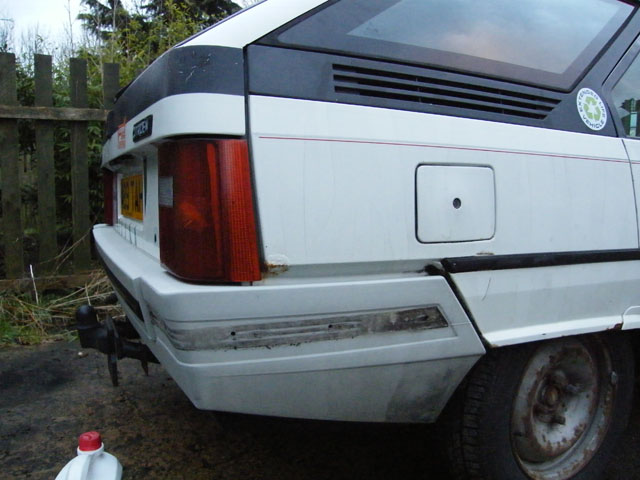 Got the front driver's side wing and the top half of the front door on the same side G3'd but not claybarred. It came up pretty good, the more I do on this car the more confident I feel that it'll tidy up very nicely. 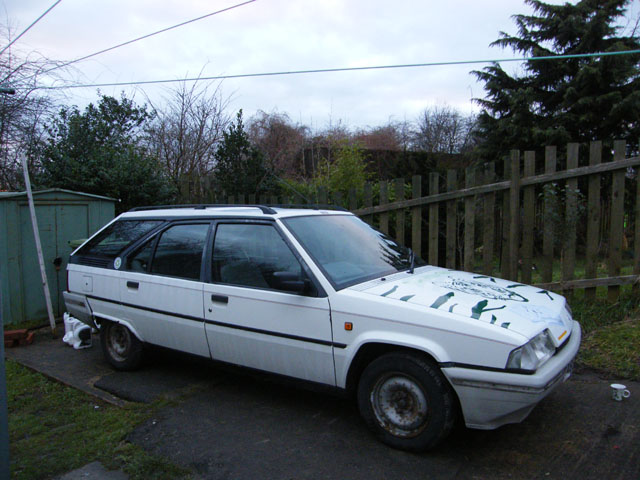 Wow, what a tranformation! And in such a small amount of time. Anything I do with a BX always takes hours longer than anticipated. I really like just the tailgate and bonnet striped, what did you have in mind for the rest of the car?
I'm not a Saint, or a James, but a Tom Saint-James!

I don't want to do much beyond repair and clean, in all honesty, and for the most part everything that needs to be is there on this car, it's a few niggly bits that seem to have wandered off. I could see that what Wally Dobbler was selling was fundamentally a very good car in need of an enthusiast's* attention. I have located a red breaker estate in Lincolnshire that should furnish me with all but the driver's seat base, it has the same interior and a less rusty back end, just a case of driving over when I've got some more funds and loading my BX up with what I need from the other BX.

Beyond that I'm thinking yellow headlamp bulbs, but not film, for a slightly more continental face and I was planning to paint the steels gloss green with Berlingo centre caps, until some smart non-Citroen wheel trims popped up from another BX owner over on Retro Rides which will do the job of tidying up a little cheaper. I've got my eye on various non-Citroen alloys too, one set of which is obviously the three spoke Saab items mentioned earlier in the thread. Tiger stripes will be reappearing in the future, but I'm keeping that particular plan secret until I've got the more serious issues resolved.

Clean of the engine, oil change, flush of the power steering system and welding the back end and the pedal box are my current priorities. I really need the car ready and reliable by the 10th of March as I'll be heading off to Brooklands to collect some stuff for my Princess, should be a doddle to fit a set of seats and a bonnet in the cavernous BX. But several hundred miles in one day with crappy break down cover in an old Citroen is not my idea of a fun day out, even if I do have a friend in a Montego to offer back-up.


*no sane person would touch it.
Top

If you want wheel trims i know a man also in lincolnshire who has a set if Z style ones?
Lots of Motors, mostly semi broken....
Top

These are going to be heading my way in a few days. Okay, so they're not BX or even Citroen proper, but they were a good price and should tidy things up for me quickly. Not too dissimilar to the planned three spokes either so I'll be happy enough with them for the time being. 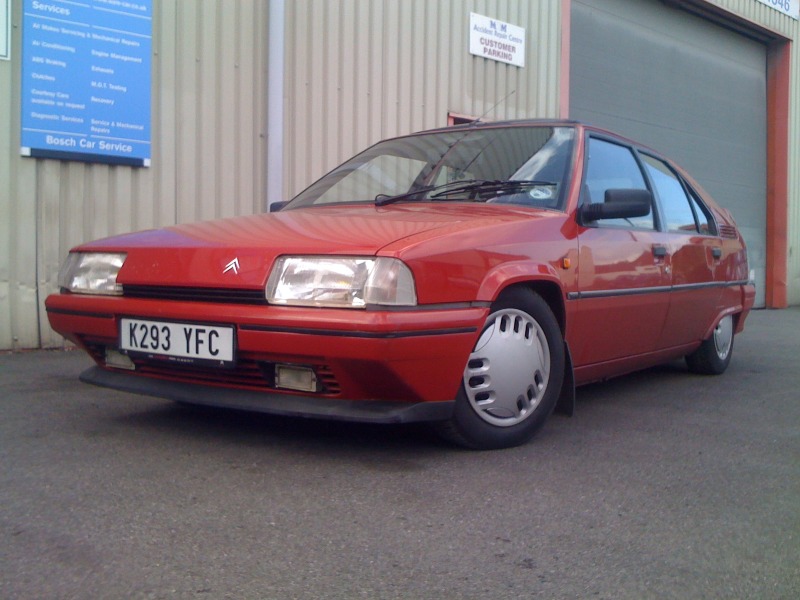 vulgalour wrote:These are going to be heading my way in a few days. Okay, so they're not BX or even Citroen proper, but they were a good price and should tidy things up for me quickly. Not too dissimilar to the planned three spokes either so I'll be happy enough with them for the time being.

Those trims look incredibly like a style vauxhall made for the Corsa B/MK3 Astra, they were only 13" though so can't be them. Always liked them myself

Your spot on there Tom, they are copies of Vauxhall Astra/Corsa ones, but in a bigger size as is often the case.
Lots of Motors, mostly semi broken....
Top

The back wing of that red breaker in Lincs looks a LOT more solid than yours. Surely has to be easier to weld a section in from that than try and make up a new panel.

Forgot to explain. That random cable on the dashboard is the old bodged heater control fitted before I got it. Sadly I think the tap has now seized - fortunately in the hot position! Once the pedal box is sorted, I'm sure she'll be back to her reliable self, so Brooklands shouldn't be an issue. I reckon she's only done 4000 miles since the last service, but given that it was 30,000 miles before that one, probably not a bad idea to do oil and filter again.
www.classichub.wordpress.com
Top

@ Tim, had them on my first car, an N plate burgundy corsa 'montana', 1.2 SPI. The power, as you can imagine, was incredible

More impressive was the noise it made, I fitted a cotton green filter that went right on top of the throttle body. Induction roar, very much!
I'm not a Saint, or a James, but a Tom Saint-James!