Urgh, I'm not in a happy place at the moment with the BX and through no fault of the car's really. I want to get work done but I keep getting hurdles put in my way, the latest being the electric drill dying a death and me not having the spare funds to replace it thanks to the Princess needing a chunk of money for road tax. If it's not one thing it's another.

The sooner I can get stuff done - and there's not a great deal to do - the better. I want to be moving house later this year and the BX is integral to that because it saves me going through the rigmarole of hiring a van. I'll get things moving again in a few weeks when there's more cash in the kitty... I hope.
Top

I think youve done really well in a relatively short time so I am sure it will all cone together,
Dont know where you live but you could borrow my drill if it would help
1991 BX Meteor 1.6

I've got a drill lined up that I'm saving for, it's £70 and should do me well for a few years as it's the direct Bosch replacement for the one of Dad's that I was borrowing. I need to invest in my own set of tools anyway, especially since when I move I shan't be able to ransack Dad's tool collection. Just got to get past the insurance deposit and road tax first. If it's not one thing it's another. Then, of course, there's the saving for the house move and all the stuff I have to replace that I had to get rid of when I lost my house earlier this year.
Top

Charged the battery, started the car up, did some Citaerobics and then noticed it's pissing water and steam out of the thermostat rather a lot now. Nothing I wasn't aware of, I'll just add it to the list. Every time I think about whether or not I'm sensible saving this BX estate I try and find another one with fewer problems and can't, so I'm pretty sure it is worth it. 'Sides, I really like this car.
Top

I'm surprised the thermostat gasket bodge has lasted that long! Can't remember why but when I fitted the 'stat, I had to pull it all apart again, which mullered the gasket. Plenty of blue sealant was used, which sort-of did the trick. So, that lasted more than 30,000 miles!

I've been questioning the sanity of hurling money at the BX estate I've got now. Decided overall that the positives probably outweigh the negatives, and that buying anything else will just lead to a new list of problems!
www.classichub.wordpress.com
Top

I think if you work through the painful expenses on the red one it'll see you good for quite a while, after all you've just splurged a scary amount on pipes, it would be a shame to stop there. I reckon Stripey needs no more than £100 to be sorted and a day or three with the welding machine to be ready for an MoT, which should be happening in about 6-8 weeks time looking at current cash flow. I'm currently off work sick, so cash is a bit tighter than normal, but I'm hoping my week away will offer a bit of respite and help reboot my ability to work again sooner rather than later.
Top

Diesel estates tend to get harder use than almost any type of car, so finding a good one the age of a BX will be tricky, as people tend to hang onto them. You're probably better off persevering with what you've got.
Mike Sims
BX 19RD Estate Mk1 - Timex!
BX 4X4 Estate - Oh god, I've done it again!
BX 17RD MK1 - it called to me!
BX14 TGE, - SOLD
XM Turbo SD,GS Club Estate,Visa 17D Leader,HY Pickup,Dyane Nomad,Dyane 6,2CV AZL,Falcon S,Trabant P50,3x Land Rovers (88" series 1,109" series 2a FFR,series 2a Marshall ambulance),DKW F7, Lambretta LD150 x 1.5,Mobylette SP93,Ural Cossack,Ural M63,CZ 250 Sport,Honda Varadero 125,lots of bicycles & tricycles including (but not only) Sunbeams,Higgins & Bates!
Top 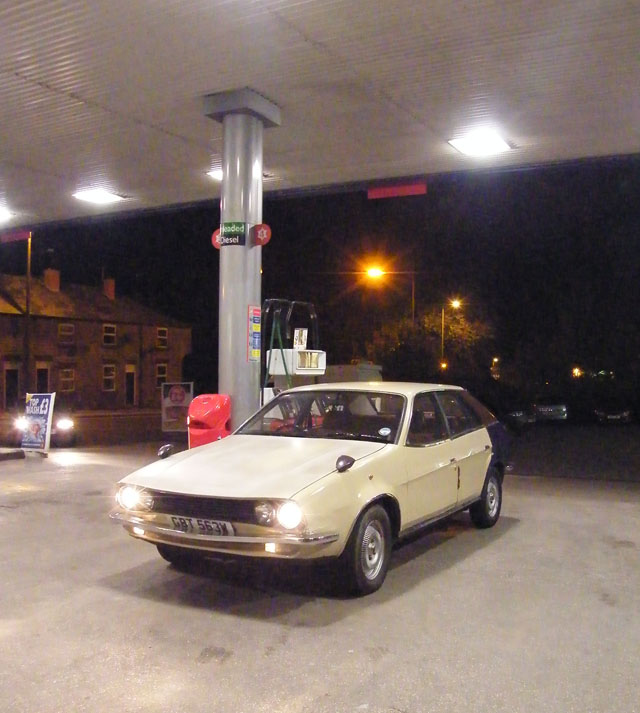 24 hour petrol stations and online taxing ability is great. I've waited 7 long months to be able to get out on the open roads on my own terms with the Princess and it's very, very welcome. Technically, the BX is the superior car in just about every way but I reckon that's to be expected considering it's a good decade newer. But for all the Princess' shortcomings, I don't think any car could ever adequately replace her and I'm delighted to be able to trundle about whenever I want to in her.
Top

My dad had a 1980 Princess 1700 in Vermillion - bought as an ex hire car in 1982 with around 100k on it, and took it up to nearly 1/4million in the next decade or so. Very comfortable, structurally solid (cosmetically tatty when he finally got rid) and for the mileage pretty reliable. Clutches seemed to last around 70,000miles, the gearbox was never touched, and the only engine work needed in that time was new valves and guides after it dropped a valve at 200,000m. The exhaust had a heat shield on one of the silencers that would break a spot weld then vibrate, and the front nearside ball joints seemed to need replacing every other MOT for some reason, but for a much malighned BL car it was great. The only reason he did finally get rid was when the dealer told him suspension units were unobtainable, and he decided he was better off selling it buying something else when it was running, than waiting until something went that scrapped it - this was in the days when you were grateful the yard didn't charge you for taking a car!
Mike Sims
BX 19RD Estate Mk1 - Timex!
BX 4X4 Estate - Oh god, I've done it again!
BX 17RD MK1 - it called to me!
BX14 TGE, - SOLD
XM Turbo SD,GS Club Estate,Visa 17D Leader,HY Pickup,Dyane Nomad,Dyane 6,2CV AZL,Falcon S,Trabant P50,3x Land Rovers (88" series 1,109" series 2a FFR,series 2a Marshall ambulance),DKW F7, Lambretta LD150 x 1.5,Mobylette SP93,Ural Cossack,Ural M63,CZ 250 Sport,Honda Varadero 125,lots of bicycles & tricycles including (but not only) Sunbeams,Higgins & Bates!
Top

Mines done about 72k and the clutch needs doing and it's started making noises occasionally that hint at a balljoint needing to be done so it looks like it's following the same path as your Dad's. Vermillion is one of the best colours these came in, I love the brighter colours in the BL range, it's a shame later cars got painted various shades of brown. Rust proofing was pretty good on these, mine's easily more solid than a similar mileage Ford, and I'll keep an eye on the heat shields as I've had no issue there yet. I hope to have many thousands of miles and a few more years yet of enjoyable motoring and I'm told Maxi spheres are the replacement of choice if you can't get hold of Ambassador or Princess units. Never going to be a numerous classic, sadly, so as she gets older it's going to get harder to keep her on the road but I'm not going to think about that now.
Top

152 miles and counting in the Princess since we got back on the road together. Loving every minute of it. Technically, the BX is the superior car but it just doesn't make me happy like the Princess does. That said, I feel bad that I'm not working on the BX, it looks very unloved at the moment

Good news! Saved some cash on getting the Princess pumped up so I put it towards a flap wheel for the grinder. This is a cheaper solution than getting a drill - £5 as opposed to £70 - and means I can crack on with some welding sooner rather than later. As you can see, the Princess sits rather higher than she did before. 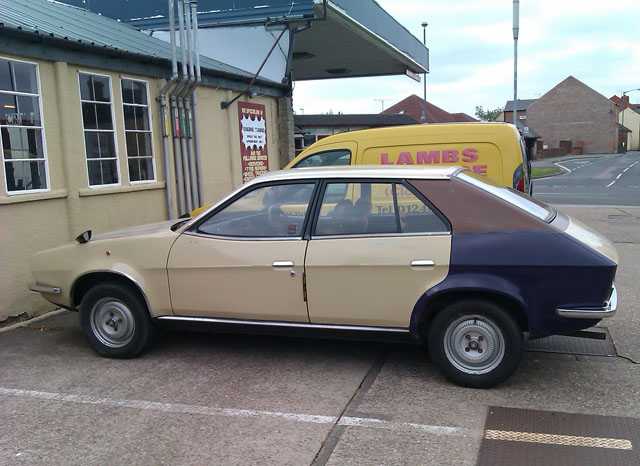 If my brother and I get the time to do so, we should see the welding on the BX done in a few days as there really isn't that much to tackle. Then it'll just be a case of saving up for the big AEP order, road tax and MoT which, all being well, should go without too much of a hitch. I just hope the couple of weeks sat in the garden haven't done too much harm to the belly of the beast.
Top

Fired up Stripey today after putting the battery on charge over night. The battery appears to be holding a charge and the multimeter gave healthy readings to show that the alternator is working as it should and there isn't strain on the battery. Suspension exercised and while a bit stubborn to rise at first, Stripey soon remembered what fun it was to go up and down and all was well.

Didn't get any welding done today because I've managed to misplace my metal cutting things, like a noob, but it did allow me to have a look and a listen to the car. The last lot of fuel I put in was diesel rather than veg, primarily because I wasn't sure how long the car was going to be laid up for repairs and I didn't want the veg going off. I've got a weird issue that's arisen now which is after about five minutes at idle the car will just cut out, as though it's stalled. No dropping of revs, no warning, it just stops running. Turn of the key and it fires up straight away no problem.

I'm thinking there is an air leak somewhere, I'm just not sure which pipe it is, and I wonder if the fuel filter is blocked again. It might be something else, so I bow to the superior knowledge of my floaty boat peers on this one.
Top
Messages: 196