As the title says, is this possible? Could you totally strip out a LHD car, more or less down to the shell and place in parts from a RHD car (inc. drive-train)? Or could you mount a LHD body onto the subframe/running gear from a RHD car? How much cutting/welding would be required? I know that there would be issues with taxing etc. but leaving those aside, practically and mechanically could this be done?
Kieran

I expect it can be done Kieran,
ime sure that there is someone on the forum with the knowlwdge.
I have just been outside to check 2 of my Mk 1s, luckily side by side, a left and a right hooker and it looks possible. OK, you may have problems with the steering rack, dont know if you could just reverse this. Also, you would probably have to change throttle and clutch cables. I suspect the holes for the steering column are either there with a blanking plate or marked in some way. Cant check because of the bulkead sound deadening in the way.

Once again however the cost in both time and money would to me be of great concern. It would be cheaper to buy another one in running order and keep the other as a spares motor. Finding another MK 1 of course would be difficult but not impossible as they do turn up as i know having aquired 2 in 6 months.
If its to be a long term project and you can do the work yourself then go for it but if you have to pay someone to do it then i wouldnt even consider it myself. Anything is possible given time and money. If it was an Austin 7 for example ide say yes right away but for a BX, well, saving a MK 1 is great but i think that in the end you may just have to say that the effort may just be a little too much.
Good luck with it.

As they say, anything can be done if you have the skills, time & money.

I don't know the specifics for the BX, but the most difficult bit would probably be altering the bulkhead, unless they put the holes in both sides for pedals, column etc (like older Land Rovers for example). If they don't have these holes, the ideal way of making sure the holes are in the right place (at least in relation to each other) would be to cut a drivers footwell out of a RHD car and weld it into the RH side of the LHD car, after lots of very careful measuring. the redundant holes in the other side can be filled with new metal. If not you're into measuring a RHD shell and transferring all the hole positions over, which would be easy to get wrong.

Mechanically, I guess you could just swap the RHD specific parts, but to do the bulkhead work properly I'd probably drop the subframe, so if your RHD donor is good mechanically you may as well just fit the whole subframe to the LHD shell.

I don't know what the law is like in Ireland, but doing that over here (assuming you do it honestly) would involve having to re register the car, including putting it through the IVA system, and unless you either used all new parts or can prove the parts used were the same age as the shell (surprisingly easy with the aluminium parts as they all seem to have date codes cast into them) you'll end up with a Q plate, with the potential hassle of higher insurance premiums that come with it.

Thanks lads. This is basically what I was wondering, for example, if the holes were in the bulkhead etc. and just blanked off. Yeah Mike this is in relation to the DTR and trying to decide what to do with it! Well time and money are a big factor.
On further investigation the roof appears to be holed, so it isn't a great indication for the rest of the body. With the state it's in a restoration is probably uneconomical and I don't think it'll be done. So given the source of RHD mk1s drying up, we were wondering, at least in theory, about getting a LHD mk1 (could be even petrol for example, maybe France, where you can still find them for cheap; it wouldn't have to be running and would most-likely have a much better body than the DTR which wouldn't be hard

) and using the parts from the DTR. At least it wouldn't have been sacrificed for nothing!
Kieran

If you're not fussy about the model you start with then finding a Mk1 donor in France for little money shouldn't be too difficult - Unlike the estates which were only really changed at the front when the Mk2 came out, there were several detail changes all round on the saloons - just look at the Tim's thread for the restoration of hs DTR to see the fun he had sorting out the rear wing on it.

As for it being a runner, although I like the idea of taking 2 non runners and making 1 good car from the 2, it may be cheaper to spend a little more on one that's capable of being driven home, and saving on the cost of dragging it back. I dunno about from you, but we can get flights into France for about £50 (last I checked), then a ferry back for 1 car for around the same upwards depending on crossing, while you could spend a lot more than that on the ferry for a Land Rover and trailer (for exemple).
Mike Sims
BX 19RD Estate Mk1 - Timex!
BX 4X4 Estate - Oh god, I've done it again!
BX 17RD MK1 - it called to me!
BX14 TGE, - SOLD
XM Turbo SD,GS Club Estate,Visa 17D Leader,HY Pickup,Dyane Nomad,Dyane 6,2CV AZL,Falcon S,Trabant P50,3x Land Rovers (88" series 1,109" series 2a FFR,series 2a Marshall ambulance),DKW F7, Lambretta LD150 x 1.5,Mobylette SP93,Ural Cossack,Ural M63,CZ 250 Sport,Honda Varadero 125,lots of bicycles & tricycles including (but not only) Sunbeams,Higgins & Bates!
Top

All this depends on if you have unlimited funds to spend on the project and i mean unlimited.

If you havnt then its time to get real and admit its not going to happen.
Ok, if its a really rare motor from 1920s then ok, its a possibility but not for a 1980s jobbie.
Do as i suggest, look for a more fixable motor, over here or in France, ship it over and it will cost a damned sight less than sorting your DTR. Its economics bud despite what others say to you.
Been frank with you, hope you dont mind. Thought the very same when i collected Mollie from Chessington at the end of last October, proposing to scrap her but found that she is amazingly rust free and a C plate too.

Andy have a look on your scrapper you should be able to see the mounting points for LHD on that shell,

im fairly certain either the hole/points or pressings are stamped into both LHD and RHD shells already for both options,

if the holes are there already but blanked out you only need to move the blank's over,

in this case you will need a RHD donor car to swap all the dash, instruments, wiring, steering, all the front end hydraulic/brake piping, clutch and throttle cables, pedal box if different to LHD, and anything i have forgoten,

There are some mounting blanks for LHD on the scrappers bodyshell but they dont look quite the same as the opposite side but ime sure they could be cut out ok.
Hope the piccie helps. 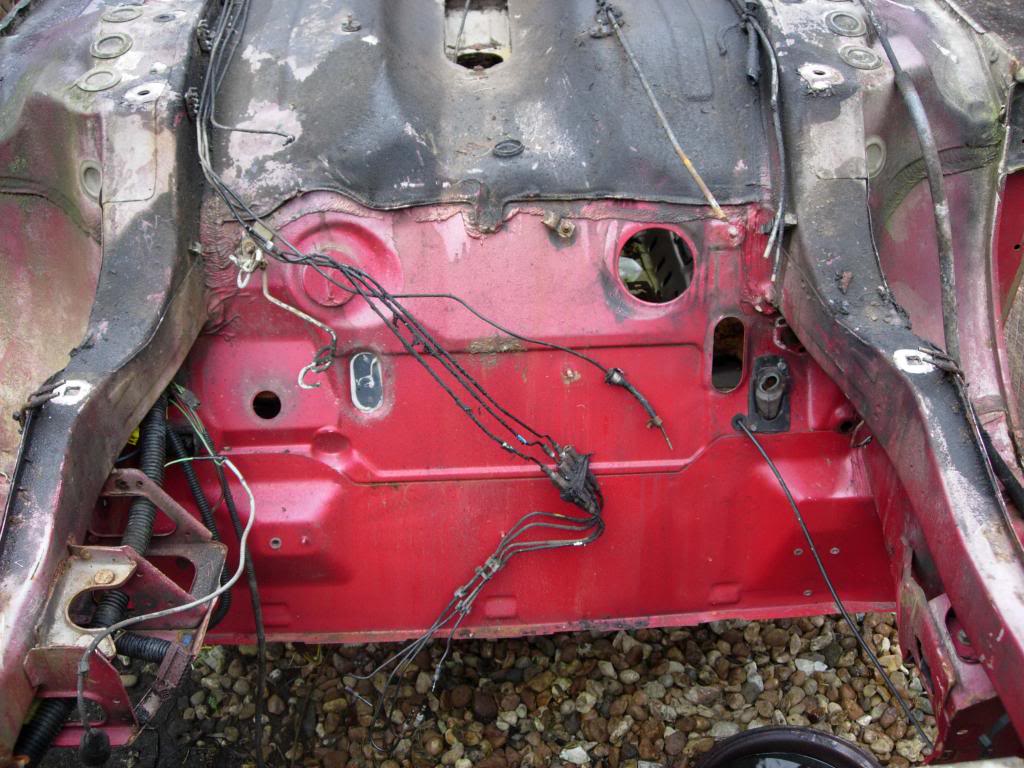 Thanks Malcolm and Andy


citronut wrote: if the holes are there already but blanked out you only need to move the blank's over

I was hoping it'd be relatively "simple" like that..


citronut wrote:in this case you will need a RHD donor car to swap all the dash, instruments, wiring, steering, all the front end hydraulic/brake piping, clutch and throttle cables, pedal box if different to LHD, and anything i have forgoten

Certainly have one of those, a very rusty mk1 DTR

Andy, that pic is looking at the engine bulkhead and the car is upside down? The holes don't appear to be in exactly the same position for LHD relative to RHD, but those indents do appear as if they might serve a similar purpose on LDH cars if cut out. It'd be interesting to see a pic of a LHD scrapper.
Kieran

Yes Kieran she is on her back.

However, i dont plan to scrap Sophie at the moment so cant give you a piccy of a left hooker in bits.
Remember what i said though bud, be a lot cheaper to go get one already done, even if over here than do what you propose and keep your Mk1s as spares.It will become a money pit.

Mothman wrote:However, i dont plan to scrap Sophie at the moment so cant give you a piccy of a left hooker in bits.

Such a unique one shouldn't be scrapped anyway!
Kieran