Tell us about life with your BX, or indeed life in general!
Messages: 264

Bloody hell, that's some in-depth rebuilding going on there!

Good to see someone commit to a 14 too.
CCC BX monthly column writer bloke thingy - bx@citroencarclub.org.uk

Caffiend wrote:I have a work meeting in Luton next Tuesday

I feel your pain, but at least you get to leave!!

The work DOES look great - we were over today to collect the Xant ( in for routine service/MOT ) and were treated to a "look see".

Your subframe now looks too nice to put under a car - you should keep it pristine, over your mantelpiece

Daisy had her rear-end rebuilt this time last year, for her MOT, and survival. The pics are on here, and on the Chevronics Facebook site, so I know your pain. But, my reasoning for having the work done was the same as yours -" she is my car, and I want to keep her".

Keep us posted, she is in the best possible hands and they will do their very best for you and your BX.

Daisy wrote:Your subframe now looks too nice to put under a car - you should keep it pristine, over your mantelpiece

Rob told me it was back and waxing lyrical about the finish! I've already considered the glass pedestal so I can admire the underside, but I have a suspicion the neighbours might think I'd finally cracked.


Daisy wrote:Daisy had her rear-end rebuilt this time last year, for her MOT, and survival. The pics are on here, and on the Chevronics Facebook site, so I know your pain.

I've had another look at the Daisy photos and the corrosion is truly phenomenal, but as I found out, the rear bumper hides so much. The pain is more than counterbalanced by the joy of seeing your car being skillfully and lovingly restored. I wish I had the equipment and know-how to do some of this work myself, but as I've said previously, seeing the scope of the work that's being done, it's best done by an expert. No-one indulges in DIY heart surgery and this is no different - To paraphrase the rifleman's creed "This is my BX. There are many like it, but this one is mine. My BX is my best friend. It is my life…", so yes,

Daisy wrote:she is my car, and I want to keep her

It is always warming to see this level of work being done to a much loved car.
Top

Another couple of photos...

The rear subframe has arrived back and is ready to be re-fitted, wearing a nice new powder-coating. As Sandre has already said, far too nice to hide under the car, but how else will the wheels work? 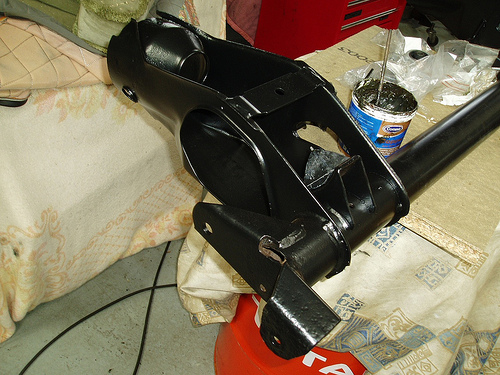 Rear subframe after shotblasting and powder-coating

Meanwhile, all the missing metal on the NS wheel arch is being replaced with new steel... 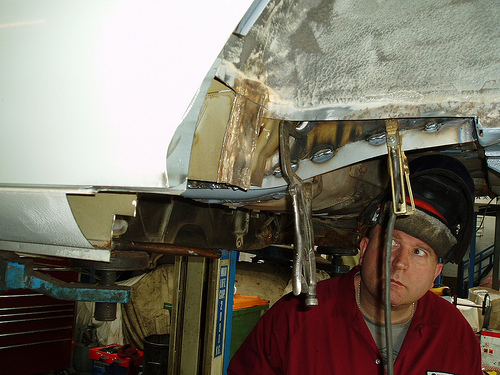 All NS rust cut out and new metal being welded in 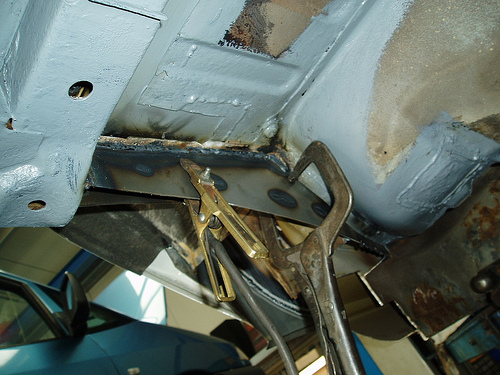 Nice work! Just as I'm feeling pleased with myself after spending most of the evening welding mine, along comes these pictures to bring me back down to earth...

I think your work looks lovely Mat - Chevronics probably have more 'state of the art' resources at their disposal?

Des - to make all the work visible when it's finished you could get some of those blue lights under your car like those Max Power lads? I expect there's plenty of information freely available on the 'Barry Boys' website? That'd look 'bangin'? Just a thought . . . easy now.

I wasn't angling for compliments there (but thanks

); rather I was meaning that it's a reminder of what feels like a big job, actually isn't really when it comes to something like this.

Unfortunately my meeting overran and I didn't leave Luton in time to nip into Chevronics and look at this. There's nothing else for it Des, if you come to a CCC event you'll just have to turn the car upside-down.

Or I suppose you could put a mirror on the floor ...
Diagonally parked in a parallel universe
1991 TZD hatch (Triton Green)
1992 Hurricane
Top

Paul296 wrote:Des - to make all the work visible when it's finished you could get some of those blue lights under your car like those Max Power lads?

Paul, I was thinking very much the same, along with the installation of a foxtrot oscar stereo, complete with a 1000 watt power amp and a 4 x 12 cabinet. I could rig the lights up to a sound-to-light unit and then crank the dial up to 11 and then play BTO's 'You Ain't Seen Nothing Yet'. The resonant frequencies would split open the newly-welded seams and pulverise the driver's in'nards, beautifully lit by the ultimate son-et-lumiere. What a way to go!

Tim will be round shortly to administer a punishment beating for even thinking those kind of things, let alone going public with them on a post.


Caffiend wrote:There's nothing else for it Des, if you come to a CCC event you'll just have to turn the car upside-down. Or I suppose you could put a mirror on the floor...

It's getting worse; first the subframe, now the nuts and bolts... 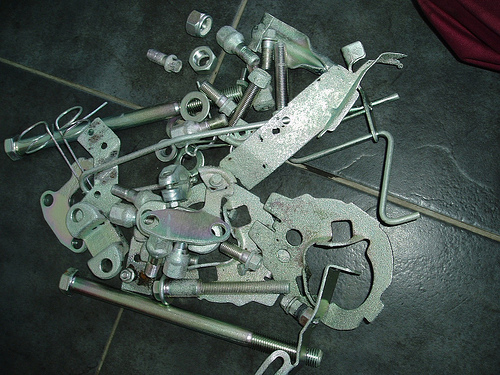 Plated parts from where the sun don't shine

Meanwhile, this is going into the engine bay. I'm thinking of asking Rob to remove the bonnet so everyone can see the bling... 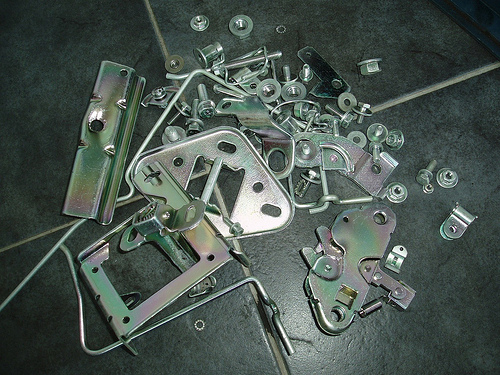 Yes, but it's cheaper and quicker with a wire brush and a can of black Hammerite, but possibly not as pretty.

This next bit won't console Mat one bit (Sorry, mate) but here are the edited highlights of the reconstructive surgery around the NS sill and the rear wheel arch. It is truly impressive, and all credit to Mat and everyone else who has the cojones to hack rusty bits out of their pride and joy and weld in new metal. As I've said before, way out of my league, which is why Chevronics are doing it. 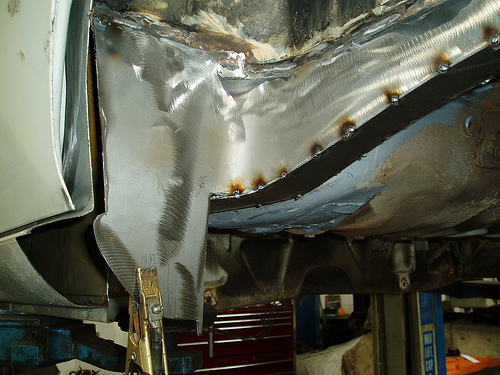 Reconstruction of the NS sill and rear wheel arch 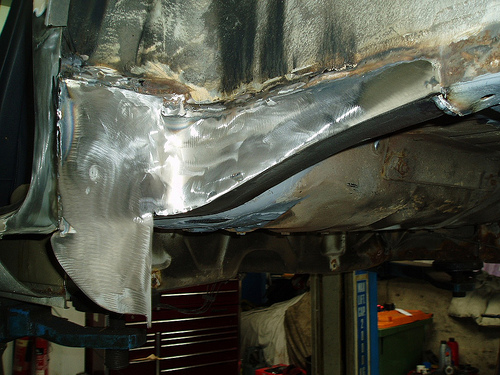 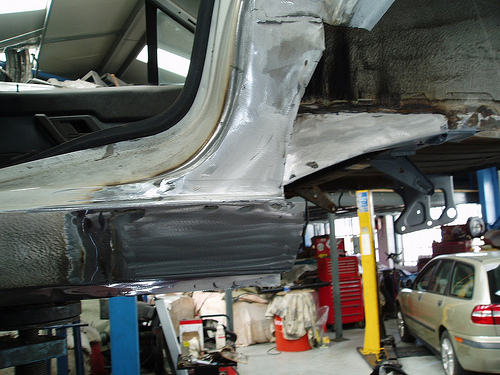 Get a clear perspex bonnet made up for giggles, then you can see the shiny stuff and avoid it getting rained on. I'm actually surprised at how much yours has had to have replaced, it really didn't look that bad to start with.
Top

It may well be that you decide against the underbody lights and attendant 'bling', but somehow when it finally rolls out of Robs workshop looking all glorious, BTOs 'You ain't seen nothin' yet' blasting from a stereo system would be oddly appropriate I think?