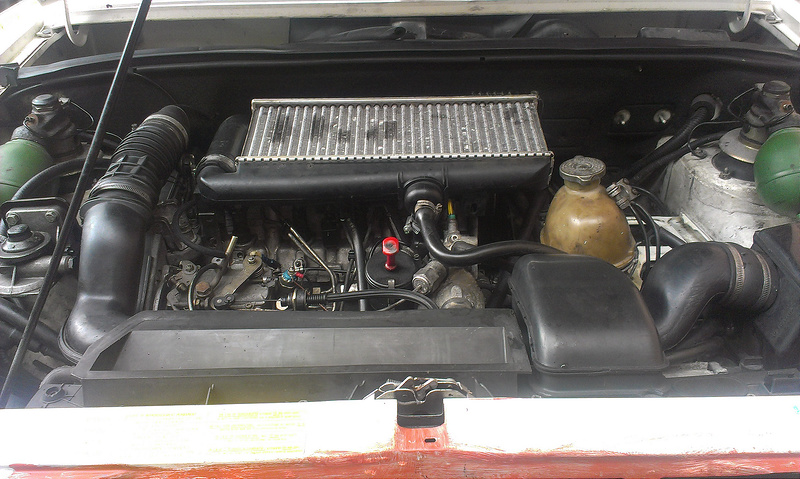 :
Looks more like an engine now! Nearly done, just need a fuel filter, to fit the return fuel hose (new straight through rubber pipe fitted), prime her up and she'll be ready for cranking.

The red paint is red oxide primer x 2 coats. Once I have some colour coat, I shall rub down and spray the area to original colour. The red oxide should keep the o2 out for now to stop the rust forming - unless red oxide is porous?

The front end that sits behind the bumper is now all treated with Bilt Hamber DEOX, 2 coats of red oxide and seam sealer along the spot welded seams. Then two coats of waxoyl's under body sealer which I think is really great stuff. It's thick, and stays a tad soft (but not too soft) and flexible. It's been on the TZD for 3 years with no signs of problems/rust returning: 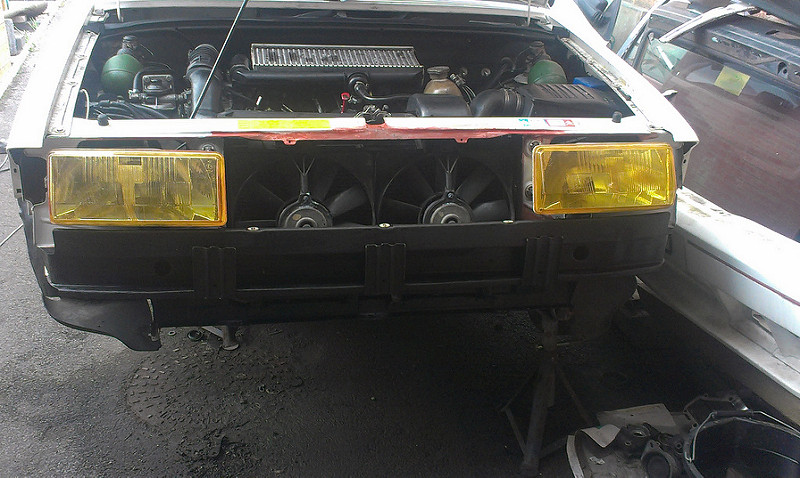 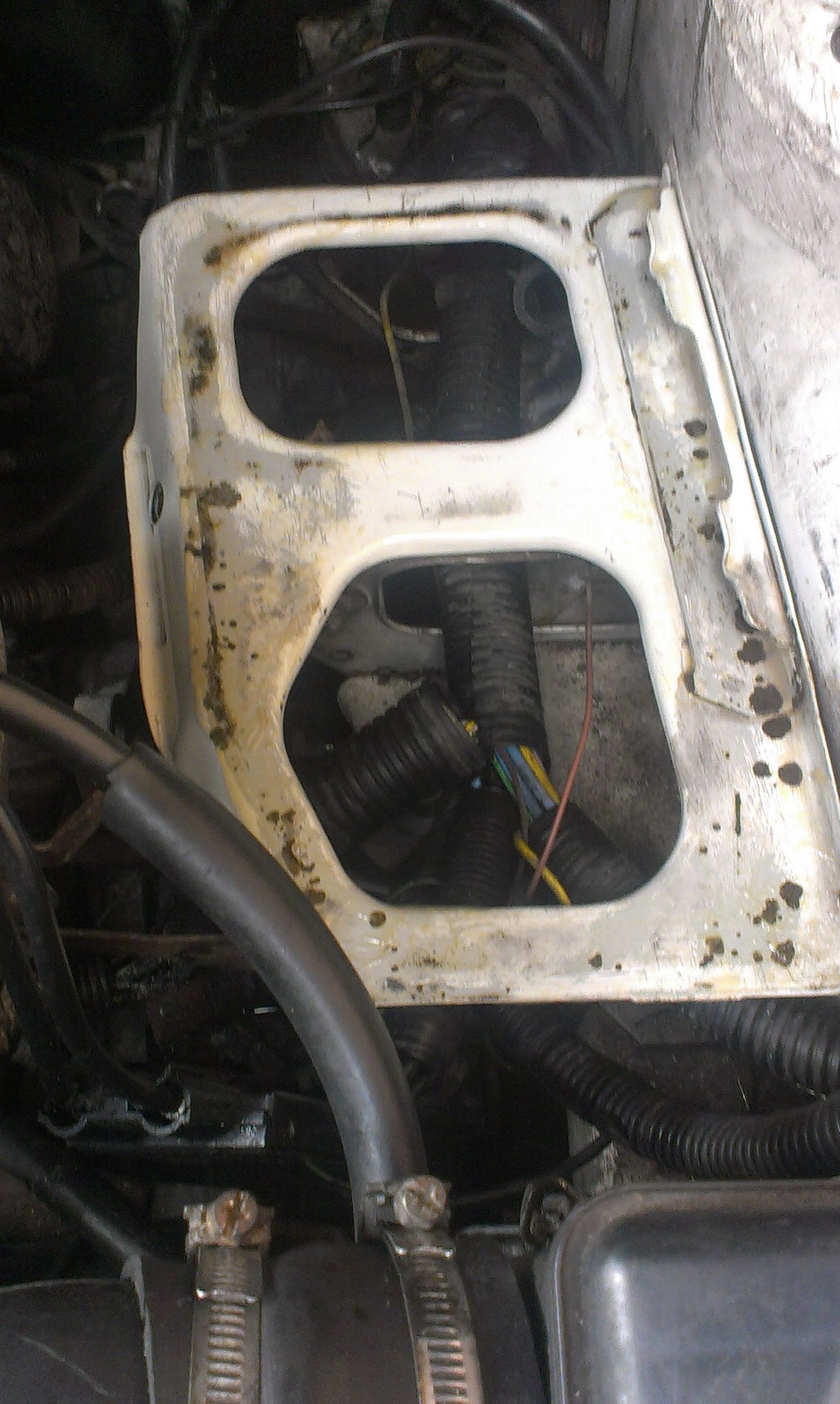 The amazingly near rust clear boot. A smidgen of rust along the seam where the rear seats bolts down. I have treated it this side but it'll need doing underside as well: 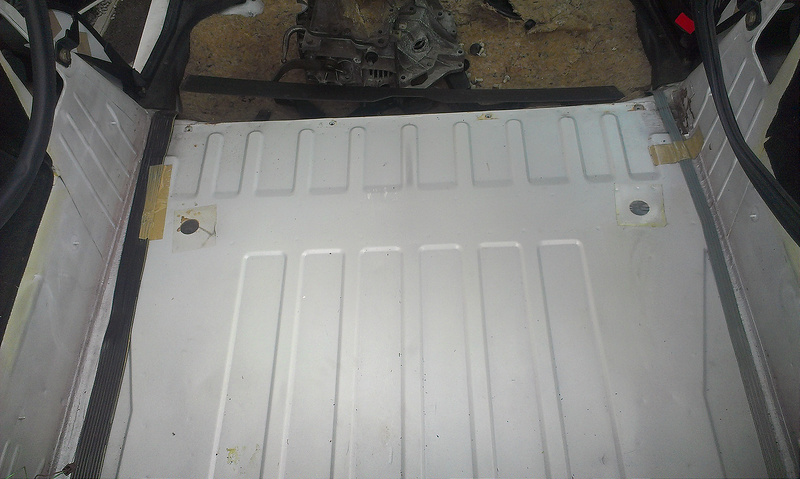 The rear nearside of the boot - gone in the usual places (exhaust hanger) but it really isn't bad. It'll need clearing up from the outside and probably a bit of welding: 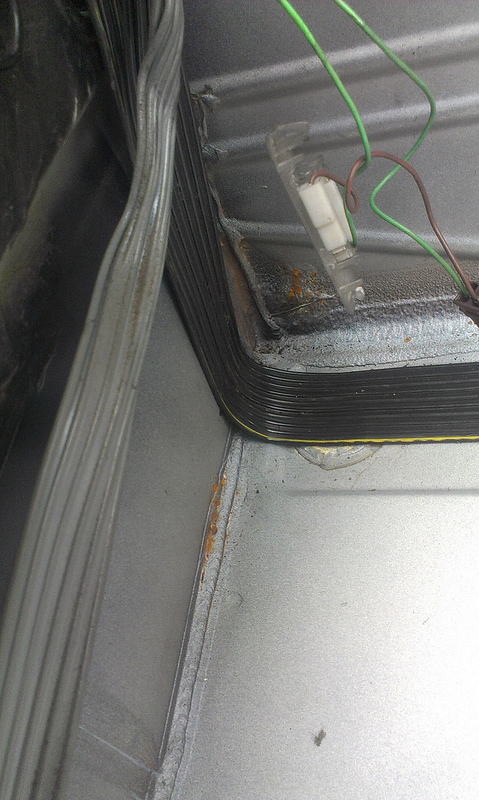 The off side rear wheel arch has started to rust through. This will need welding up too: 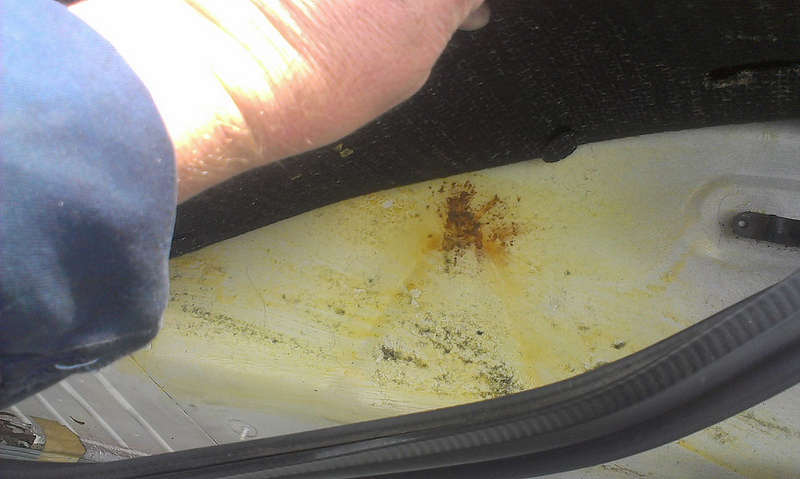 Bird poo! How does bird poo get in a car? Was it french poo? Merdre! 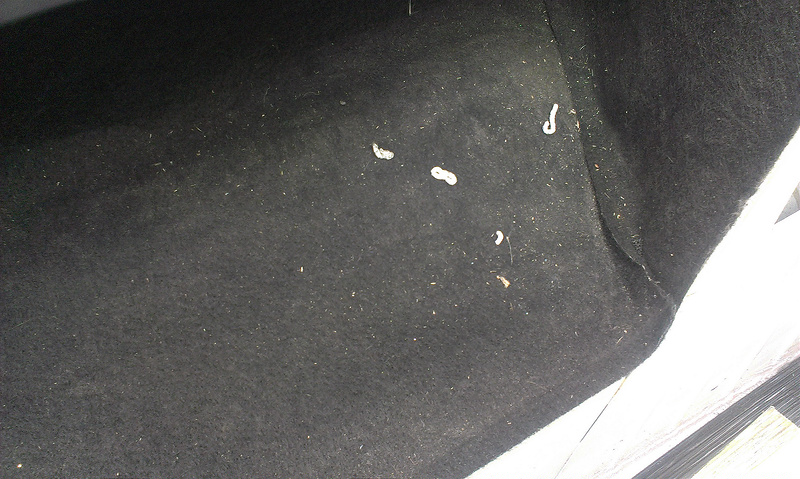 A bit more rust than i'd have expected

Mind you, it has been a year since it was parked up.

It's not bird poo, it's some kind of insect poo, snails, slugs etc. We never quite worked out what but we used to get a lot of it in the hidden areas of the awning!
I have zero patience for your tedium.
Top

Could of cleaned the intercooler

Perhaps I will clean it! It's not full of crud mind, just a few oil stains.

The back seats and the boot trim is all in now.
The c pillar and b pillar trim is all black.
The refurb end brake calliper is fitted, but needs pads and discs fitting and then a bleed. I also fitted a new brake flexi as the original had started to crack.
Battery tray double primed and the underside of the slam panel is derusted, double primed and double under sealed.
I'm in two minds wether to exchange the dash boards and fit the interior side of the air con. Not sure I can cope with a grey dash and besides, it means I don't have to store it/prevent damage etc.

Oh badgering bottoms! The exhaust flange of the gt turbo didnt align, both by height and angle, but it was damned close. Not sure how to get over that for the minute so I had to remove it and replace it with the original kkk, hateful job, all full of fibreglass now

New fuel lines fitted, old Skool turbo back in and I plumbed up. Just waiting for fuel filter to arrive tomorrow and I can fire her up. I need the pressure up so I can close the gap in the front callipers and apply firm handbrake. Then I can crack the near side hub nut and drop the hub carrier off - the threads that carry the brake calliper are knackered so I need to swap the hub carrier with my tzd
1990 BX 16V Platinum Grey
1990 BX TGD White
1960 Morris Minor Clarondon Grey
1971 Triumph 2000 Auto Valencia Blue
Top

Decided that a direct air con swap is not the way forward (I.e. I shall remove it from the scrapper and fit it at a later date into my replacement) so I refitted the heater box. Once fitted, I noticed I hadn't put the the heater matrix back in. So, unbolt the steering column and loosen the bolts to drop the heater box. Ok, done.

Fill her up with water and crank the engine over at 5 second intervals. Before she fires up, I thought I'd check for leaks. Fakin' oil everywhere.

Oooops there's a hole in my head. Well, the cylinder head. It's the hole slightly 'eclipsed' by the camshaft. 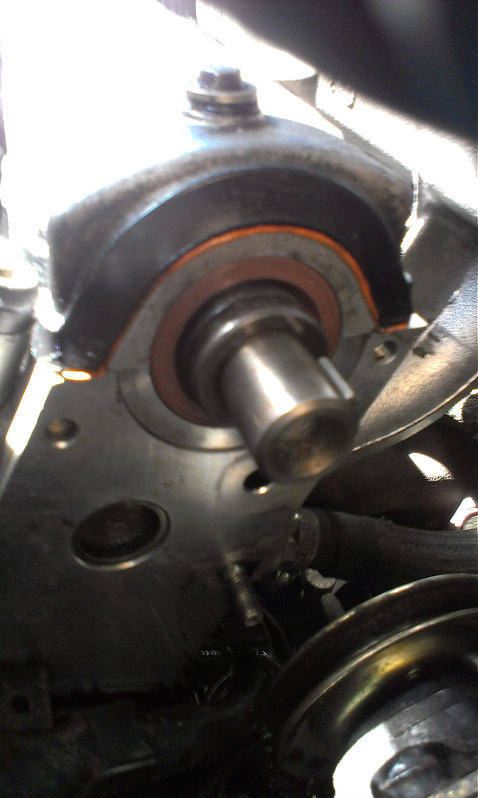 On the previous head this hole was blocked by an M8 grub screw. But in my new head, there is no thread to take this grub screw. The hole will need to be drilled and tapped but I ain't doing that with it on the block as swarf will undoubtedly drop into the oil ways. As a temporary measure, I made up a plate and a rubber gasket to seal the hole. The mk 1 version didn't work so I had to alter it slightly. 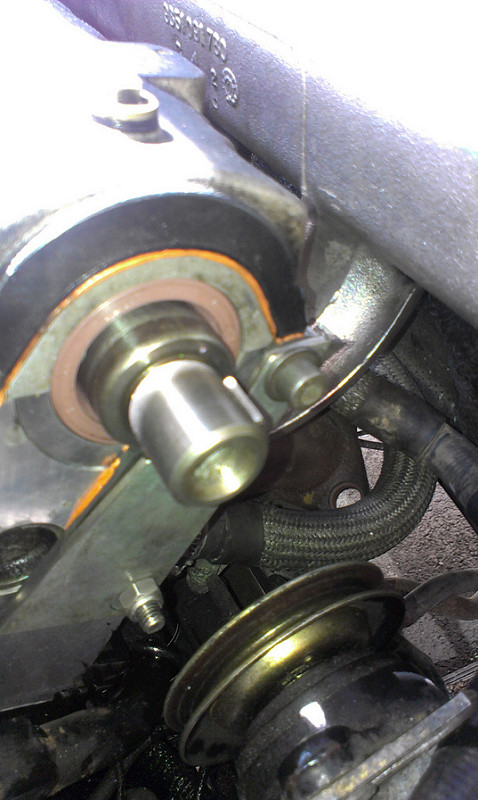 Eventually, the fix worked and eventually she fired up. I left her running for about 20 mins, checking the header tank, opening and closing the bleed screw, checking for leaks etc. after the 20 mins I felt the radiator - stone cold. Suspect the thermostat as head side of the housing was pretty darned hot, but only tepid on the other side of the thermostat.

I gingerly tweak each bolt in turn and sure enough, two of them are seized. So I now have to replace the thermostat housing but with the later labyrinth type. GRRRRrrrrrrrr.

Still, whilst she was running she ran quite sweetly. I also knocked over my box of bolts sorted into m6 and m8. Happy bunny not I. Take a deep breath, drink 50 pints of cider and two gallons of winoplonk and start again next week once I'm out of hospital!
1990 BX 16V Platinum Grey
1990 BX TGD White
1960 Morris Minor Clarondon Grey
1971 Triumph 2000 Auto Valencia Blue
Top

YEs mate, came off a pug 306. But was the oil way left open to lube the vac pump? In any case it's irrelevant, darn pain in the doo dah.

That's right. Jaba came up with the good idea of screwing in an oil pressure sender there to blank off the hole, but your point about swarf still applies.

mat_fenwick wrote:That's right. Jaba came up with the good idea of screwing in an oil pressure sender there to blank off the hole, but your point about swarf still applies.

Did I ?? Thats a good idea.
The Joy of BX with just one Citroën BX to my name now. Will I sing Bye Bye to my GTI or will it be Till death us do part.
Top

it is a good idea although I 'think' it'll foul the cam pulley, not sure though.

My dad has some proper gasket material and I'll make another plate out of 5mm and use the 3rd tapped hole to the left of my leaky hole in addition to the other two.
1990 BX 16V Platinum Grey
1990 BX TGD White
1960 Morris Minor Clarondon Grey
1971 Triumph 2000 Auto Valencia Blue
Top

Wouldn't a small piece of 8mm o/d rubber hose smeared with silicone slip into the hole and then screw a short bolt or screw into it? (along the lines of a rawlplug and screw expandy-type idea)

I've got some pretty standard 4mm silicone hose with 8mm o/d in the garage so it's fairly available.

Just an idea!
I have zero patience for your tedium.
Top

The hole is slightly under 8mm. An 8mm ball bearing, a punch and a fecking big hammer will fix the "leak".

Alternatively, a short length of brass bar beaten in will do.

Or tap the threads then spin the engine over to spit oil and swarf out?

Or tap the thread and then use a piece of small bore pipe (like a drinking straw) in a vacuum cleaner hose to vacuum out all the swarf?

Is the Pink TZD with A/C that gone then? Strikes me that moving A/C from one car to another must mean the amount of work needed on the TZD is massive...
this might be a signature
Top
Messages: 161