Well, today saw her moved to the top of the drive to get a bit more space and fettle into shape for the MOT.

There a couple of minor sill repairs and rust spots to see to, but not necessarily before the MOT.

Two new tyres and some top up lhm aside, I've been giving her an Autoglym paint renovation (fine t-cut) to get rid of all kinds of oily fingerprints and dirt etc.

I also have a persistent air leak feeding my pump, i need to address this as air affects timing and will explain (hopefully) my gladly deteriorating white/grey smoke problem.

I have managed two side shots, one with black speedlines and one with grey....what do you think? 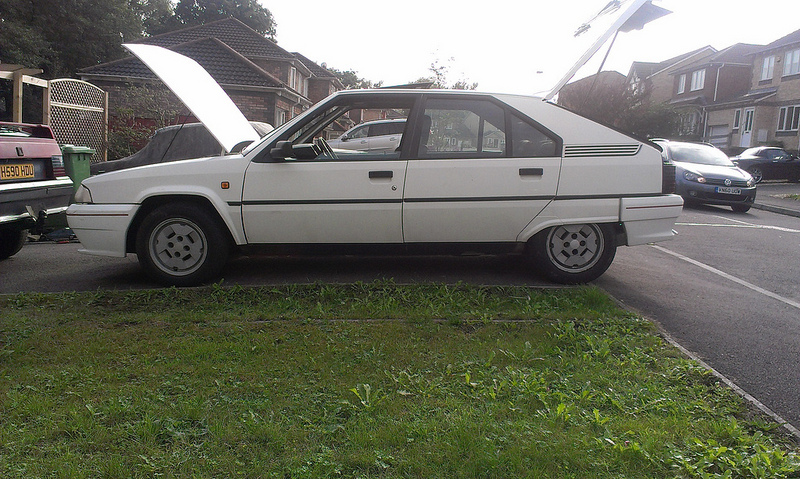 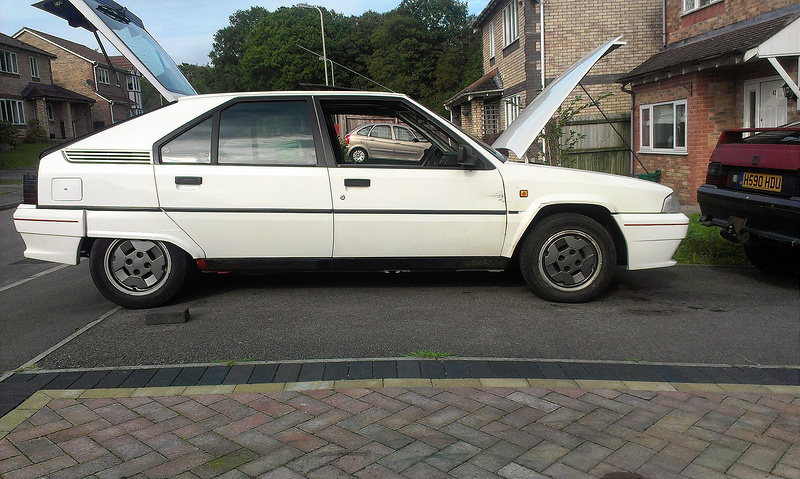 Looking good! (are you replacing the spoiler)?

First time ever, i prefer the light alloys.
I have zero patience for your tedium.
Top

MULLEY wrote:I vote for the silver alloys, makes it look nice with the white paint

I like the anthracite wheels, but agree no spoiler makes a nice change.
Lots of Motors, mostly semi broken....
Top

Out of interest, did you reconnect the fuel heater behind the block? I believe it's gone porous which is why i bypassed it and cured the starting fault it had when i bought it.
I have zero patience for your tedium.
Top

Thanks chaps, nice responses. You know, I have an inclination for the silver ones too and I didn't think I would. It looks slightly more honest somehow, or as Mulley put it, less chavvy.

I'm afraid I shall disappoint some here then, as I will add a spoiler, but a whale tail type and the 16v c pillar grilles. Basically, when I've finished the 'project' she'll be a white hurricane, but I have a bit of work to get there yet, although I do (smugly) have the bits.

I know this won't sit well with the purists, but a pair of mk 1 front wings would suit. If you look at from the side, the orange repeaters stand out nicely with the white paint work, but by comparison, the pale anaemic front indicators don't sit well. Imagine mk 1 indicators and you get a nice orange contrast link type thing - or am I talking crap?! I have a mk 1 indicator so I'll sticky tape one on and take a piccy today.

I thought after a few turns of the steering yesterday with the weight off the wheels that I'd sorted the power steering issue (I.e. It was just air) but it's still heavy on the ground. However, I am very low on lhm and possibly on high it was letting some air in, so I'll need to top up and do a thorough bleed through of the system, fingers crossed.

Jay, I still left the rear heart isolated on the rear of the block but I did re-install and standard filter and primer assembly, mostly as I accidentally pulled the end out the primer bulb you put in and couldn't get it to reseal, but I have a X@ntia one on my scrapper, so I'll pull that off today and see if I can be air free.

I'd be keen to know people's opinion on the mk 1 front wing idea, pics to follow tonight!

Des, I'm sorry to disappoint, but the spoiler is going on.......the valver/hurricane spoiler is the only one I like though and I do agree however that a non spoiler look is that little bit purer. I'm with you on the tail blazer things though........eugggggh!

Your car to do with what you wish - it can always be changed back at a later date.

What do you think to these? 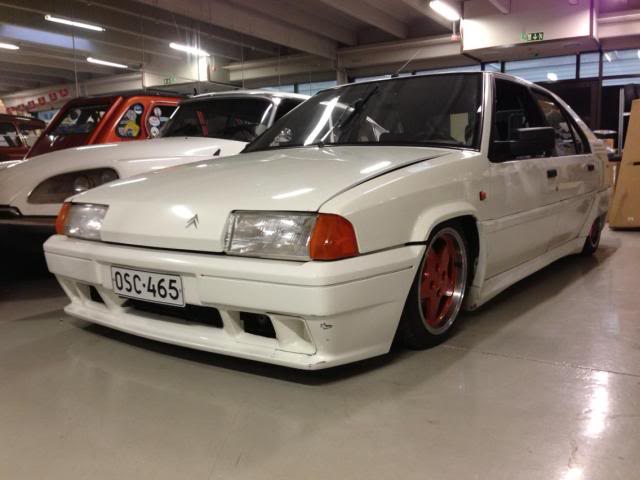 From this thread. I can't decide about the wheels, so won't cast my vote. I'm having enough trouble making up my mind about mine! Are you fitting side skirts?

BX Bandit wrote:I know this won't sit well with the purists, but a pair of mk 1 front wings would suit. If you look at from the side, the orange repeaters stand out nicely with the white paint work, but by comparison, the pale anaemic front indicators don't sit well.

Totally agree with you about the orange contrasting with the white, but have you considered colouring the clear indicator lenses orange? It would be a whole lot cheaper and quicker than changing wings. I'm thinking about doing it for the St Tropez (more purists upset) for exactly the same reason.

I've picked up some posts about this on another forum and this Tamiya acrylic paint comes highly recommended. Follows on from Matt's post above.

Not to worry about the spoiler. I just think the profile and shape of the BX is compromised by bolting anything on to the back. I had no strong feelings about this until I had one BX with and one without.
BX14TE St Tropez 1990 - now sold
Xsara Forte 1.4i 2000
Kawasaki GPz550A4 1987
Top

Ive never liked the aerofoil, much prefering the rubber or P2 16v type so good choice.

I think the Mk2 indicators in orange are a bit too big and look wrong but its not my choice.
Lots of Motors, mostly semi broken....
Top

I agree with Tim there, too big and, although not sticking with an original spec car, I only wish to embellish with genuine bx items. Besides, imagine the below pic with a mk 1 wing and I think it looks great.

I won't bother with the sill kit Matt, I'd prefer to have it as something different from the valver, so that the valver remains the extra bit special.

As regards expense, I've managed to scource, though not yet obtained two used mk 1 wings, and one indicator, I have spotted another on eBay so I'll be buying forthwith.

To me, although it won't be or look a true BX, it'll resemble the BX Sport somewhat, which I really like. 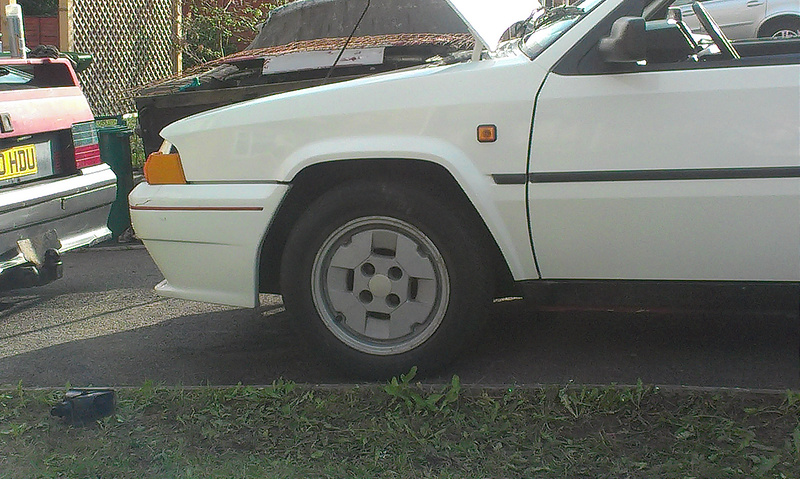 Another vote for the silver speedlines here.

Its strange how tatstes differ, we all like BX's obviously but i hate the P2 valver rear spoiler, i mean REALLY hate it.
where as i really like the shopping trolley handle of Ph1 valver, TZD etc etc.


Life would be dull if we were all the same Mat, a more varied bunch of guys and gals on this forum you probably wouldnt find!

I prefer the long nosed bonnet, dislike the pram handle spoiler and am happier in the light and airy grey interior over black (but not a pre 88 model as thats too light and looks plasticky (yes they did two shades), the Z trims over speedlines and the Mk1 interior (but not the GT dials) but would choose the exterior of a late Mk2 with two tone bumpers over anything even a Mk1. I also prefer automatic petrols and manual diesels....
Lots of Motors, mostly semi broken....
Top
Messages: 161