Anything about BXs
Messages: 37

Following on from Kitch's decision about a paint job or not, I've been considering what to do with mine before the show. At the very least it will get a good clean inside and out, a polish and I'll paint the window surrounds. It's likely the tyres will be fairly new by then, so that will make it look a bit tidier (although I think tyre black goes a bit too far on a non-new car).

It's the other little details I was wondering about...like should I leave the GB sticker on? Showing that it still is regularly used, even for long trips. And my rear number plate is deteriorating, so that needs replacing anyway. However, I do have the original rear dealer plate (with the wider pre-2001 font) which I removed to fit a pair of new plates when the front got damaged shortly after purchase. So I could get a new, matching front made up if not too expensive, plus I still have the original dealer's tax disc holder.

Personally things like that don't bother me either way, but what about the wider public at a classic car show? All thoughts and opinions welcome.

Dealer plates and tax disc holder every time if its going to be on display to a wider 'classic car' carowd.

I think Tim can get old-font plates made up. I do hate modern-font plates on cars that wouldn't have had them when new. (have been meaning to get a set made up for the 2CV for many years!). I don't mind a car that looks its miles though.

Once you're at the show, I'm sure the polish will come out anyway but for me, it's clean glass that really makes a car look good.

Actually, just had a thought, if you don't mind lugging it all the way to Birmingham and back, how about having a suitable selection of logs in the loadspace? I'd really like this year for at least one car to somehow be 'stuck' at normal ride height too. Might need a bit of thought beforehand.
www.classichub.wordpress.com
Top

Funnily enough, you're not the first person to have suggested logs! Sound like a plan.

) by just cutting a couple of blocks to fit under the front and rear subframes. Not sure axle stands would go low enough.

Dollywobbler wrote: Actually, just had a thought, if you don't mind lugging it all the way to Birmingham and back, how about having a suitable selection of logs in the loadspace? .

I think the 'logs thing' is a really good idea - instead of a bit of tarting up just present it as what it is - a working car that does exactly what it says on the tin (and plastic). It'd make a nice contrast to all that half-assed polishing rubbish that some of the nerds on here go in for.

Paul296 wrote:instead of a bit of tarting up just present it as what it is

In that case do I even need to bother cleaning it? 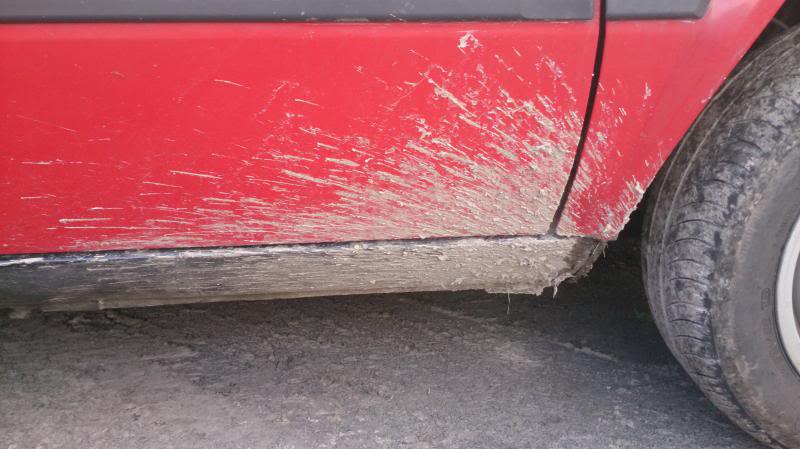 That's after just two days; I am washing it every week (including the wheel arches!) to prevent mud build up but it feels a completely fruitless task

I like the workhorse idea, but plan on using the show as justification for a bit of tidying up!

No reason why a workhorse can't be tidy. I'm just trying to think of a way to garner interest rather than just having a row of shiny cars.
www.classichub.wordpress.com
Top

Dollywobbler wrote:No reason why a workhorse can't be tidy. I'm just trying to think of a way to garner interest rather than just having a row of shiny cars.

Public expectation at car shows for well presented examples of cars has never sat well with me as something I want to do as a pastime. But it is they that pay the money to enter so there is a tacit agreement that there has to be a constructive attempt at a good showing of tidy cars. Unless a stand is offering a display of some narrative content. All this preparation can be a lot of work. I wonder how much good it is for some cars as it can be cosmetics when full detailed work would move things forward further. Then again I might one of those who just do not get the NEC type show thing. I know there are folk who gain great pleasure out of it, respect it and I hope all goes well.

Last year, 2CVGB went out of its way to have presentable but not immaculate cars on its stand, and people loved it. I'm not saying don't have shiny cars, just have a bit of balance.

A few 'props' to go with logs sounds a great idea! Maybe we should also have a tree for Mat to fall out of?

Thread Bear wrote:Then again I might one of those who just do not get the NEC type show thing. I know there are folk who gain great pleasure out of it, respect it and I hope all goes well.

I think that's a fair point, it is not fully clear of what the driving aim is for this activity. At the Motor show the aim is clear - to promote product awareness and sell new cars. The success of the show will be measured by how many cars are ultimately sold as a result of the companies attendance at the show.

The motivation for attending a classic car show is obviously different. I guess the driving factor for the attending members on BXC is to get the BX recognised as a classic as the CCC membership has been generally dismissive of the BX's importance despite the initial Citroen marketing hype.

I too hope they succeed, but I wonder how the success of the show will be measured? As sales of cars here is not the issue, clearly there must be other factors & maybe it's just for the chat?
1991 BX19GTi Auto
Top

It's all about raising the profile of the cars, which hopefully makes people consider one in the future. You also get to chat with a LOT of people who remember then and want to reminisce. It would be interesting to know whether site traffic increased after last year's show. I absolutely love just standing around chatting to folk, helping with technical queries (did you know we have a great forum etc?) and generally doing my best to 'sell' car and club. I certainly don't go just to chat with other BX Club folk, though that's nice too. We can do that in a field for much less money!
www.classichub.wordpress.com
Top

In danger of digressing a bit, but it's my thread so who cares.


I wonder how the success of the show will be measured?

I think that for the clubs with paid for membership, success could be partially measured by the increase in membership after the show. Obviously no such financial incentive here, although more members is generally a good thing.

My personal reasons for offering the car are partly selfish I'm afraid - I'll get a bit of a proud feeling having people looking at and (hopefully!) admiring the car that I've done a lot of work to (although not necessarily cosmetic) and that I choose to do most of my driving in. I was both pleased and surprised that it got voted onto the stand.

Back on topic, a general tidy up, logs and a chainsaw it is! I'll bring my older red and black one, which will match the car nicely

Dollywobbler wrote:Last year, 2CVGB went out of its way to have presentable but not immaculate cars on its stand,

We all have differing opinions of what is presentable and whats not and wont always agree.

I think Mat if you can make it looks as good as you can then fair enough, i.e. washed, polished and hoovered, clean the windows and touch up any glaring issues then people will know its a high mile workhorse that is cared for but used.
Lots of Motors, mostly semi broken....
Top
Messages: 37