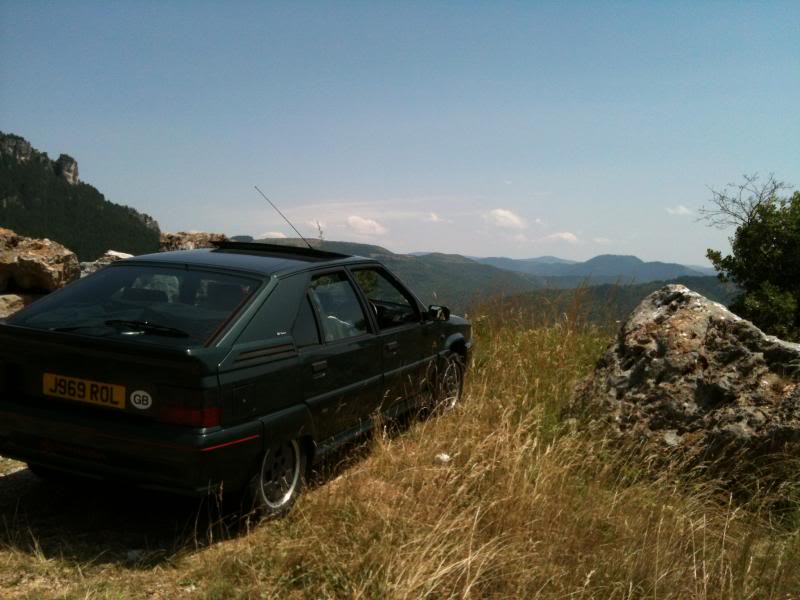 Thought I'd start a post for my lovely 16v. The picture is from a recent 2,300 mile round trip to the south of France (pictured here in the Cevennes national park), which passed without a hitch apart from one instance of starter motor reluctance in 40 degree heat.

It's had a bit of an interesting history, which I've culled together from the history folder provided by the previous owner and from looking back over various posts on the 16v forum, but it boils down to being a 1991 16v in a 1992 Hurricane body, with the only thing not officially 16v about it being the rear subframe and antiroll bar - the latter being slightly thicker on a 'true' 16v. Sadly you can't swop the ARBs over because the 16v ARB has integral brackets, whereas those brackets on the rest of the BX range are detachable. The previous owner (who shall remain nameless) lied to me about that and led to me wasting lots of time and money on trying to sort out his botched efforts, but let's not dwell on it, because overall he sold me a very solid car for a very reasonable price having performed the rest of the conversion to a high standard.

Having owned a real 16v for 10 years prior to this (which is now Patersom's one) I can't really say I've noticed much difference in the handling. I suppose it's a little less taut around bends, but hardly noticeable - especially because I doubt I've ever driven a 16v with the correct 16v spheres (has anyone?!). And the DVLA think it's a 16v so I'll leave it as that.

The engine allegedly had £9,000-worth of mods done to it by a previous boy racer owner. I'll scan in the garage sheet so you can all have a laugh at it at some stage. It has a 'chipped' ECU which only seems to raise the rev limit... The 3rd and 4th gears are from a 205 apparently, to improve acceleration. When I got it, it was all debadged apart from a modern 'Citroen' logo emblazoned across the rear bumper (gross), but I'm slowly putting that right.

Overall it is in marvellous condition, if I do say so myself. The fully refurbished wheels are a particular highlight for me. Cosmetic jobs that need doing, however:

It also has half an a/c system that I may or may not get round to finishing once I source all the missing bits (but the trip to France wasn't really that bad without it, I think we've all gone a bit soft about 'needing' a/c lately) and I reckon the fuel pipes look a little too corroded for my liking. The offside rear arm needs doing. Oh and the handbrake cables rub on the wheels, but then so do everyone's...

I'll update every now and then when I get round to these little jobs (and no doubt others that will crop up!)

You can, so I've heard, fit a 16v rear ARB to a non 16v setup. Not sue who has done this, Docchevron would be the best to ask. I believe it requires a bit of grinding but I'm not too sure. I have half a plan to do this to my TD and the bits to do it!

On the handbrake cable side, some non genuine makes are too long. I'm unsure which makes are the longer ones vs the correct length ones, but it does mean you don't have to put up with the rubbing!
1990 BX 16V Platinum Grey
1990 BX TGD White
1960 Morris Minor Clarondon Grey
1971 Triumph 2000 Auto Valencia Blue
Top

Mended the throttle cable over Christmas. The spring on the throttle butterfly is pretty strong on a 16v, so I think the plastic standard attachment at the pedal end is alway prone to failure. So I thought I'd beef it up a bit. Used a mountain bike brake cable from Halfords, thoroughly greased. Found a suitable bolt and drilled a hole in it. Then once fitted, used thread lock on the nut, and voila. 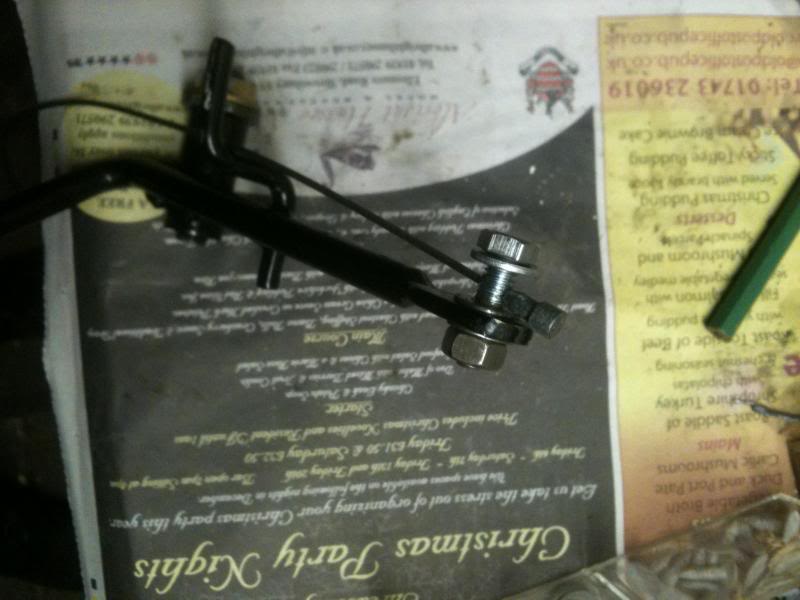 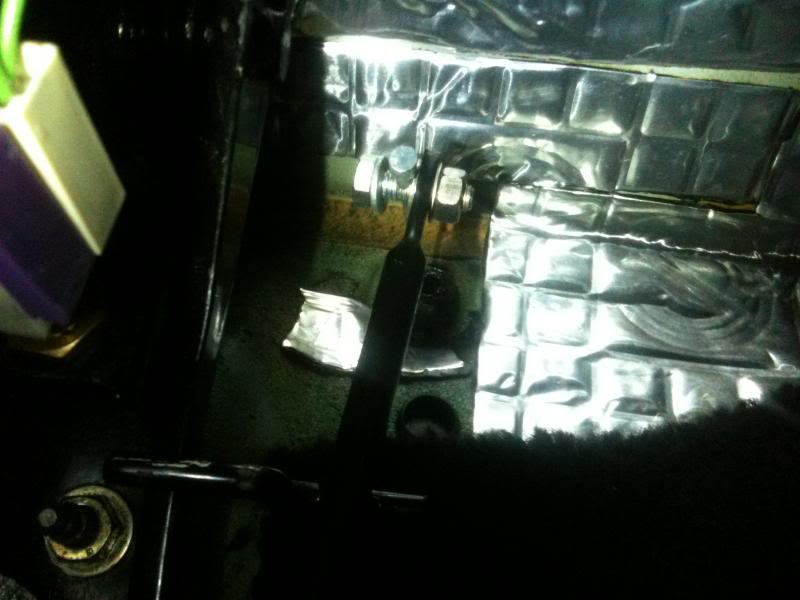 Here's a long overdue update. It's still running! My neighbours are all big fans and every time I'm crawling underneath it or am bent over peering into the engine bay people stop to chat. The local kids call it 'sick', which I think is a compliment.

Some of the usual age-related issues are arising, but I've just treated it to a bit of TLC with a full service and cambelt change (I'd forgotten what a nightmare that is on a 16v, and is even harder in the pissing rain out on the street), and all doing well considering the age and mileage. I also got the struts reconditioned by Pleiades and had the spheres recharged so it's back to its floaty self. A slight knock from the front suspension still, but when I had the front end up to do the cambelt there was a bit of play in the offside track rod end, so perhaps it's that. I got 500 miles out of a tank (approx 35mpg) on a recent trip Oxford-Shrewsbury-Gloucester-Axminster-London, and only half of that was motorway, which I thought was rather good. I saw another BX on the M40 just north of Oxford, and we exchanged waves, if you're on here?

This time next year I'll be charged by TfL every time I drive it due to the new ultra low emission zone bring introduced. So perhaps this is my last year with her, we shall see. But as it happens I ride my bike most places for local journeys, so I'd say the BX only gets used 2-3 times a month. This may result in me thinking the extra payment is worth it for the fun of driving a 16v ( once you've left London's congestion behind!)

Always a few little jobs on the list to keep me going, which should keep me busy through winter lockdown, weather permitting. A slight blow in the exhaust and a few wiring gremlins spring to mind.
1991 Citroen BX 16v
Top

The key word is "fun"! Partly due to an impending MOT and wanting to test a few things I took my GTi out yesterday for the first time since March. Indeed the petrol in the car was put in in Honfleur at the end of last year's Challenge, so it's only done 300 miles in a year...

Once it had loosened up, what a joy to drive! Just so comfortable, feeling so light and nimble compared to our other two cars. So much nicer!

I don't know if the rest of you experience this, but so many people stare at the BX now. Of course being rather angular it looks very different or perhaps it is just a battered, noisy car driven by a handsome driver! When we lived in Gillingham some of the kids on our street called it the Back to the Future car.

Welcome back Rob, glad you still have the 16v....wish you still had the Gti!
Lots of Motors, mostly semi broken....
Top

First Forum I was on was run from Singapore by Brij or similar. Other users were Graham, Jeremy, MikeE Bob Smith and JBUK. The likes of Roverman and Cavmad came along later
The Joy of BX with just one Citroën BX to my name now. Will I sing Bye Bye to my GTI or will it be Till death us do part.
Top

One of the long standing 06 16v club members and probably moved over from original forum as I did.
It was a lot busier then.