Advertise your car for sale here. No parts or eBay spots in here please.
Messages: 18

As per title, we suddenly have too many cars and i want to clear the decks a little. So i offer the forum folks this... 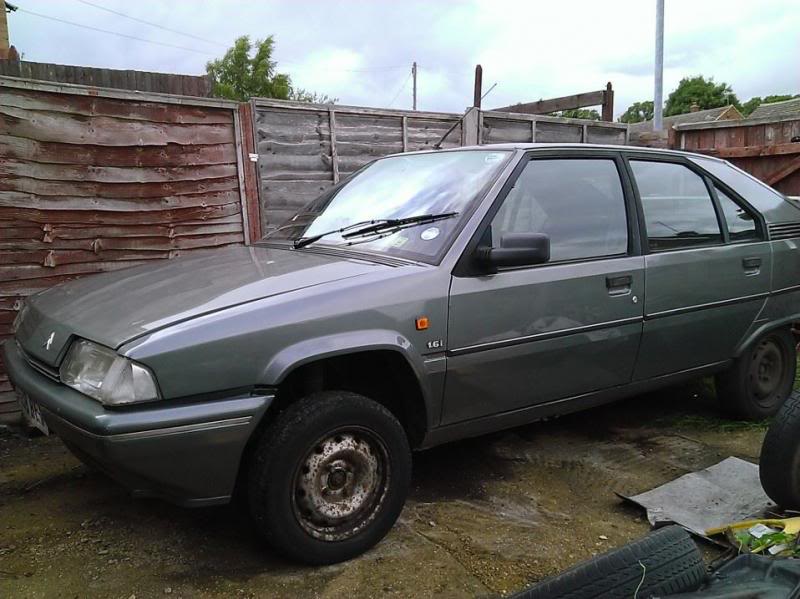 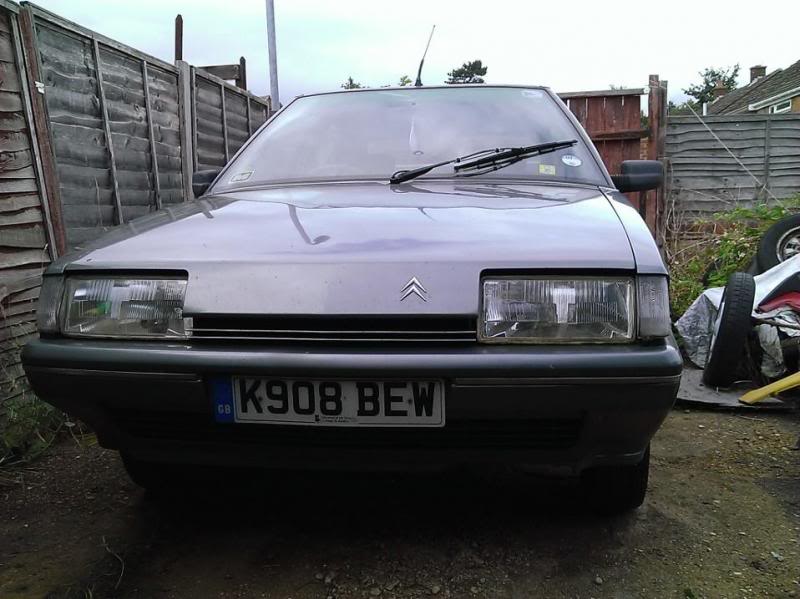 Its driving and raising lowering, its had some MOT standard remedial welding, it needs a little more (and i mean a little, as far as i know that is) It actually drives pretty well.
When i got it the octopus was throwing out lots of LHM, so i have bodged it up with cut and joined sections just to keep it mobile. It also has an oily engine bay due to a broken oil filler pipe that was throwing out for goodness knows how long before i got it. its done 160k or something but has obviously been looked after most of its life.

Its mainly good nick. And should go back on the road without too much hassle.

I paid 200 quid just to save it at the time. I will take offers, although id like to get close to what i paid, but try me. I need the space more than the money. If there is enough interest in parts then i will break it.

Sorry, i should have pointed out, it ran out of MOT and tax in july. (when i bought it)

It failed on inner front wing welding im told and LHM leak (which i can believe as ive addressed part of welding and the LHM leak is gone.

Ive just run out of space and the auto now deserves a decent driveway space until it can be garaged.

As i say, im open to offers but my aim is close to what i paid, which is only 50 quid above scrap money anyway to be fair.

Stinkwheel wrote:
I paid 200 quid just to save it at the time. I will take offers, although id like to get close to what i paid, but try me. I need the space more than the money. If there is enough interest in parts then i will break it.

Stinkwheel wrote:
I paid 200 quid just to save it at the time. I will take offers, although id like to get close to what i paid, but try me. I need the space more than the money. If there is enough interest in parts then i will break it.

I know, look at me, its like ive been feckin' about with old cars for years or something. Honestly Rich, i know people dont like talk like this about breaking, scrap etc....But its only an old BX

Stinkwheel wrote: , i know people dont like talk like this about breaking, scrap etc....But its only an old BX

careful Matt you will get Leeched , I mean lynched for saying things like that

Seriously though, this needs to go.

First person with 100 quid buys it. Dont make me do anything regrettable folks

He's all talk - he'd never break a BX! If he did he'd be sleeping next to the Berlin Wall for a good month

Charlotte wrote:He's all talk - he'd never break a BX! If he did he'd be sleeping next to the Berlin Wall for a good month

It does make you feel bad. I went home feeling sad last night after an evening with G-SEG, even though I found even more rust while I was taking it apart! If you acid dipped it, I shit you not you'd have next to nothing left!

Still felt sad though. The fact it looked nice didn't help either. I like BXs

He's in Northants, not a zillion miles away from Kettering. Very handy for Derbyshire in fact.

EDIT - or should I say THEY ARE in Northants. Sorry Charlotte.
www.classichub.wordpress.com
Top

I've recently joined this site, although I've had BXs for many years and absolutely love them, or indeed any hydropneumatic Citroens, but I've only ever had BXs.

I probably should start a new thread (and apologies for the long ramble) but...

I also have a 16 TXi (but in silver) and I was wondering if you reached conclusion on whether or not it's 'just an old BX'? Sadly, last November my TXi, which I've owned since 2001, developed an engine problem. One of the oil seals leaked oil onto the cam belt. I'm not sure if it was the top or bottom one (the oil had sprayed everywhere), so I replaced both and changed the belt but I was left with a misfire that I could not diagnose (I've changed the plugs, leads (the old ones were leaky) and dangled an earth wire around the coil but couldn't see any spark leaping out of it in the dark, so I don't think it's electrical (HT wise)). I've also changed the throttle body from a spare one I've got and cleaned all the electrical contacts, but it made no difference. I took the timing covers off twice to re-check and re-check again that the timing and holes line up perfectly, so I don't think it's a timing issue, but perhaps I'm wrong. I guess the next stage would be to measure the crank angle and cam lobe position, but I've not done this. The misfire only occurs when warm and when pulling away from stationary, particulary when a high torque is demanded. No misfire noticeable when running at high speed, although since the problem developed I daren't take it on a motorway voyage. Sometimes the misfire coincides with a back fire, so I think that's a good indicator that there's fuel going in, but not combusting. I've also changed the fuel filter too and the air filter was only changed six months ago for the MOT.

I've suspected the head gasket for many years on this car because I've had a mysterious coolant leak which is more noticebale on short journeys, also some mayonaise in the usual place and the exhaust always looks very steamy. It's never been a problem beause I frequently top it up. With all the work I've done recently I've now confirmed that the head gasket is OK because I've done a combustion leak test (negative) and a leak down test (no air bubbling up through the coolant). I did the leak down with the pistons at the top and bottom and when at the bottom, there was also no air bubbling through the coolant, so I think that also rules out cylinder liner cracks (so th ecoolant leak might be through the liner o rings?). There is however, plenty of air leaking down through the rings of all the cylinders (which may explain why a oil seal popped) and cylinder #2 has an inlet valve leak which has been on-going for many years because I can hear it when the engine is under load (although it's never yet been a problem). I don't have a proper leak down tester so I don't have any %s for you. I tried a compression test too, but the results are ridiculously low, so I think my tester is duff. The engine over recent years has also started to consume oil and this has been getting much more noticebale on long trips which probably indicates worn rings/liners more than valve stem seals.

So my conclusion is that the timing is probably OK, but the engine is not in good shape, and the compression may just be too low to support complete combustion over the whole load range. It's done 140,000 miles and I've always looked after it with very frequent oil changes. It mainly does motorway journeys because I use my push bike for everyday commuting and some local trips. Is this the way these engines tend to go? Has anyone had a similar experience with a BX 16 or an equivalent Pug? Apart from this, the engine sounds OK, ie bearing wise. I'm rather disappointed to face this problem at this mileage especially with a good six months test left.

Anyway, after about 5 weekends of trying to sort it, I simply couldn't do without a car anymore and the misfire at lights and junctions is either just disconcerting or dangerous! So I've now got a Mk3 Mondeo diesel (which of course comes with it's own bundle of problems, but I'm learning fast and it rewards you with a nice all day long 1850 rpm engine speed at 70 mph and cruise control, so I'm sort of happy with it, but blimey it's complex!).

That puts me with one too many cars really, and hence my initial question here. I'm not quite sure what to do with it and sadly I don't own acres of land with barns etc. I know really it's not worth any money (ie scrap value) despite having 6 months test. I think the engine needs a re-build.

If I can find 'a space' I might keep it and if I find the time, I'll get it back on the road. However, that will be many years down the line I suspect and the deterioration will set in further by that point. I have a turbo diesel engine from my old TZD which I had to scrap in 2004 because of rot, so perhaps I'll convert my TXi to diesel (I quite like the sound of that, has anyone done that here?). I'm quite attached to it (very sad), so I'm reluctant to sell it as is, but if someone is interested, then please let me know. The body has corrosion in the usual passenger side wheel arch which will need welding before the next test I think, but otherwise it's not too bad. I Waxoyled everything when I bought the car in 2001 and have tried to keep on top of it since. The windscreen is just starting to go misty around the edges too. I put a reconditioned alternator on it about 500 miles previously. I changed the clutch and cam belt in 2008 at 120,000 miles. In the last three years it's had new front brake callipers, clutch cable, handbrake cables, front spheres, ACC sphere, hydraflush and new LHM and new tyres all round. There's no tax and it's currently SORN because I transferred the insurance to the Mondeo.

Oh yes, and I forgot to mention, that I also have a BX 16 RS pilot which perhaps I'll introduce to you one day, so I might keep the TXi for spares - watch this space.

Theres no "just an old BX anymore Ed" the numbers are that rare nowadays, sadly the "cooking" cars (no offence) dont fetch strong money unless its a 16v or Turbo D or something very special, ike the super low miles Pilot on ebay and Graeme's 6000 mile Mk GT.

The 16TXi is a nice and rare model at the very end of the BX production and did away with the common 1.6 carb problems and are a nice car to drive. That misfire may be something simple as electronics, theres lots of tech bods on here who can help.