Hi guys, had a bit of a time trying to start the TXD turbo these last few mornings. Once, I could put down to it just being a BX, but twice is too coincidental.

The engine will start as per usual, then after 10 seconds or so, then sound rough and stall. When I mean rough, the XUD 'cracking' noise gets louder and it then stalls. It won't then start for several minutes, no matter how much glowplugs, or right foot is given (have tried with and without both in all combinations), it may cough and splutter as if it's trying to start, then eventually it'll splutter enough that if you give it some juice it'll catch and roar into life - with the accompanying blue smog that this one makes if you rev it when it's cold (which I very seldom do). This happened Sunday and this morning, almost identical behavior both days.

A few notes, when anything but balmy it needs two whole lots of glowplugs before it'll start on all cylinders (whole being waiting till the relay clicks off), this one needs glowplugs when it's warm out too. There is a lot of oil and gunk in the breather system, as I found out when I last serviced it (intended to take all intake hoses off and clean inside them, but time or lack of, hasn't allowed it). It's down on power for some reason, but is doing better than usual mpg (usual 49-53, currently 55-58), and the back box is quite holy, and if you kick it, soot falls out the holes!

I need to do the back box before the MOT anyway, and I still want to clean all the intake and breather hoses. So maybe that's a good place to start?
I'm not a Saint, or a James, but a Tom Saint-James!

Sounds like fuel starvation - are you using diesel fuel or some mixture of veg oil, engine oil, whatever? Just wondering if a drop in outside temperature is causing your fuel to complain. Fuel filter?
Top

It does indeed sound like fuel starvation.........or, same thing ultimately but different, air in your system.

Is it on the road/in frequent use?
How old is the fuel?
What colour is the smoke at the exhaust when it's dying?
Does it run/fire up smoothly before it dies?
1990 BX 16V Platinum Grey
1990 BX TGD White
1960 Morris Minor Clarondon Grey
1971 Triumph 2000 Auto Valencia Blue
Top

Thanks for your replies guys. I usually use shells nitro+ diesel, only because the shell garage on the way to work sells it rather cheaply.
It's my daily drive, does over 50 miles a day and has done nearly 15,000 miles since I bought it last December, so I guess that rules out old fuel and lack of use! It gets fairly hard use, I used to really enjoy the turbo kick, sadly it's less of a kick now.

Doesn't really smoke when it dies, but when trying to start again white/grey smoke is just visible. When it finally does start, and usually at every cold start up, there is a little puff of blue smoke (usually can't see it, except when I park on the drive and can see the reflection of it in our lounge window).

Not sure when the filter was last done, certainly not in my ownership.
I'm not a Saint, or a James, but a Tom Saint-James!

It's a lucas Neil. It's always been flat before the turbo comes on boost (noticed by Kitch, during the rolling road day in comparison to 2 other TD's) - this hasn't changed, but the surge when the turbo comes on boost used to make me smile like a little boy, now it's much less of a kick and a bit disappointing. I suppose mid range on boost is noticeably down, as is top end. It's always had a flat spot lower-top end.

Maybe a better way to describe it is by speed, as the rev counter doesn't work! In 3rd flooring it, it used to come on boost at 40 (pull the rug under you're feet style), go flat around 50-55, then pick up just after 60 and pull surprisingly well all the way to just over 70 when the governor comes in. You still notice it coming on boost and get a nice little perk up, but feels flat all the way to the top after this.

I never lacks power, just feels slower than it was. It was dyno'd at 90.3bhp at the flywheel (average of 3 runs) in the spring.
I'm not a Saint, or a James, but a Tom Saint-James!

The grey one has the same start and then stall problem, but only when I park it facing up hill....
It's also economical but relatively slow - the white one's much faster (bit much more black smoke). A while back I cleaned out the small bore hose from the intercooler to the Boost Control Valve (it was full of oil) and that seemed to perk it up a bit, but I think the valve itself is probably on its way out.

KevR wrote:and may also account for the occasional hiccup/stutter in general running, which again seems more common when I'm going uphill. I'll be changing all the front/rear fuel lines shortly.

Funnily enough, I noticed both Sunday and this morning a little hiccup up one hill and a tiny surge on another. Also on very long journies, say motorway miles after a couple of hours, when I pull in somewhere it has idled oddly, almost as if you're pressing the throttle lightly at regular intervals (every couple of seconds). Has done this one other time, when it was very hot in July and we went around longleat in it - was fine all day, but at a roundabout on the way home did the same when idling. Turning engine off and back on again fixed the problem.
I'm not a Saint, or a James, but a Tom Saint-James!

If it's never been changed before I'd check for a split in the boost compensator rubber diaphragm... These can be very slightly split for a while causing sluggish performance but they can bite you badly given the right conditions!
The whole unit is a pretty easy change and available from Delphi still for around £100 + VAT - There's also a great eBay seller who just sells the rubber diaphragms much, much cheaper but a bit more fiddly to fit..

On a lighter note the Lucas pump will start to rev slightly and not hold a correct idle speed if it's drawing in too much air... If it's not been changed recently I'd look at your fuel filter housing... I've just changed my old Purflux for a universal Bosch screw type with an inline bulb primer as my TD suddenly started having a high idle like yours and was almost impossible to start when pointing uphill.
1988 BX 19 Gti 16v
1991 BX 17 TZD Estate
1991 BX 17 TZD Estate
Top

Ok, thanks for all your input guys.

I already have a bulb primer, if this is significant?

While i'm here, where is myfuel filter? Sandre's TZD turbo has it between the LHM reservoir and the sphere. Could mine be somewhere really convenient like on the bulkhead and behind everything? 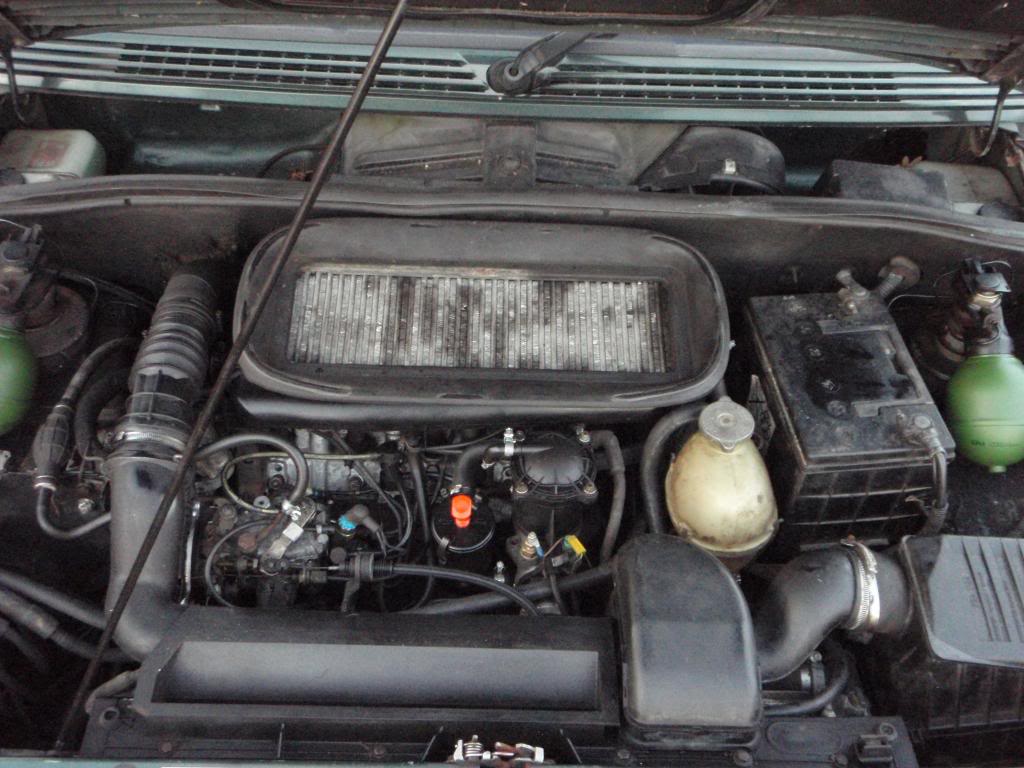 Lucas are very prone to air ingress and can suffer problems without any significant loss if fuel or external sign of problems.
Firstly, I had a Lucas pumped tgd turbo. If you parked it nose down on my drive, it would start as usual, then rev it's nuts off, with the revs surging up and down. Park it arse end down and it would drive normally.
About a year later it just lost all it's get up and go, it felt like a asthmatic 1.7 n/a. It turned out that the diagram responsible for fuelling the pump during turbo boost had gone porous, letting air in and playing havoc with the fuelling and timing. I believe it's a reasonably common failure. When they work, personally I think Lucas are better at starting and economy, but they are so unhappy about air.

This, IMO is where Bosch get their deserved reputation, not quite as good, but very much just get on with it. If air gets in, it just gets dealt with.

Mild bunch has beaten me to it! Being a 93 you have the later style fuel filter. These Can let air in too on the thermostat type valve on the lower left hand hand side of the filter housing, toward the back. I really need to put up a piccy.
1990 BX 16V Platinum Grey
1990 BX TGD White
1960 Morris Minor Clarondon Grey
1971 Triumph 2000 Auto Valencia Blue
Top

She does use water, and oil, and LHM. But fairly sure nothing is being burnt, as the engine is always black underneath (subframe will never rot on this one!) and it drips onto peoples drives/the road.

Had a pretty good look at the expansion tank a couple of months ago, had to replace the stat housing-to-front-pipe sealant ring, ran it until the fan came on to remove air from the system, had very few bubbles even then. Usually check fluids weekly, and top water up every other week or so and oil similarly. Had the radiator warning light on on the dash twice now, when I forgot to check the water for a while

The oil I put down to slightly worn piston rings, i've never seen blue smoke when the engines warm.
I'm not a Saint, or a James, but a Tom Saint-James!

Might be a good idea to plumb in some clear line between the filter and pump, VW style, too. Gives you a good visual indication of air getting in and early warning of old fuel lines and dodgy filter housings.

Even after I changed my fuel filter housing and the car starts much better, I'm still noticing occasional bubbles in the fuel line... the steel pipes don't look great underneath and I should probably bypass the fuel heater at the back of the engine.... Not sure if you have that setup on your TD as you have the newer filter housing as Bandit mentioned..
1988 BX 19 Gti 16v
1991 BX 17 TZD Estate
1991 BX 17 TZD Estate
Top