Some of you know I've been looking int this for a little while, and although I hope to have a finalised proposal for the route in another week or so, I just want a feel for how many people might be able to make it. I think the biggest issue for may will be cost:

Working on the basis of Late June / Early July for the dates, it'll be around £300 / car for the ferries.

Fuel is a bit more expensive, but not much worse than the Highlands were this year.

Camping will be on a par with this years costs, and I have found a few sites that also have hostel & B&B accomodation.

I'm happy to plan for however many (or few) will be going, but if there's a general consensus that a cheaper option may be better for next year, giving people a chance to save for 2015, I've heard Wales suggested as an alternative location, which I'm also willing (with the help of some of our welsh members with regards to decent routes etc.) to organise.

Would love to get to Ireland at some point but my plans for 2014 are very much up in the air. Naturally I'd be more than willing to help with any fallback Welsh plans.
www.classichub.wordpress.com
Top

Sorry chaps, i would love to go but have promised a week away somewhere warm and sunny next year.
Lots of Motors, mostly semi broken....
Top

Tim Leech wrote:Sorry chaps, i would love to go but have promised a week away somewhere warm and sunny next year.

So you are going to Wales then?!!

I'm up for a Eire Challenge. If I can secure a co-driver to split that costs. I'll sail from Heysham.
Mark Smith

I think we have Espania in mind and going on one of those aeroplane wotsits!
Lots of Motors, mostly semi broken....
Top

If it went ahead, I'd be keen to do it but the ferry costs would make it doubtful I think

Again, happy to help with any Welsh plans - maybe combine the two and have a couple of days exploring Wales either side of the ferry crossing (Holyhead to Dublin then return via Rosslare to Pembroke?)

That's a possibility Mat. One thing to bear in mind is the ferry costs vary depending on the day of the week - Tuesday's and Wednesdays seem the cheapest as far as the southern crossings are concerned, but I'd have to check for the northern route.

The one I usually use is Pembroke - it's a nice big boat and usually has plenty of space, and has retractible stabilisers to cope with rough seas. There's the option of cabins, but I can usually find a bench seat to kip on, or failing that find a quiet corner of the observation deck to roll out a sleeping bag.

If we use Pembroke for the way back, there's a good, full facilites camp site (including free WiFi) a few miles from the dock that cam be used, enabling us to take the morning ferry back, getting into Pembroke at lunchtime. Then if you fancy self catering there's a nice picnic are on the edge of the town.
Mike Sims
BX 19RD Estate Mk1 - Timex!
BX 4X4 Estate - Oh god, I've done it again!
BX 17RD MK1 - it called to me!
BX14 TGE, - SOLD
XM Turbo SD,GS Club Estate,Visa 17D Leader,HY Pickup,Dyane Nomad,Dyane 6,2CV AZL,Falcon S,Trabant P50,3x Land Rovers (88" series 1,109" series 2a FFR,series 2a Marshall ambulance),DKW F7, Lambretta LD150 x 1.5,Mobylette SP93,Ural Cossack,Ural M63,CZ 250 Sport,Honda Varadero 125,lots of bicycles & tricycles including (but not only) Sunbeams,Higgins & Bates!
Top

I'm up for being a co-driver and promise not to put my feet on the dashboard. Especially if I happen to be driving at the time. Go on, make me an offer I can't refuse, you know you want to.
Diagonally parked in a parallel universe
1991 TZD hatch (Triton Green)
1992 Hurricane
Top

Ireland would be a really cool place to drive round - I've done it myself, down the East coast anyway. Some truly great roads over there, but it's unlikely I'd be able to do something like that what with the young family etc.

But if something happens in Wales I don't need much prompting to go for a razz around the Evo Triangle!

I would certainly be up for Ireland and could also help with a Welsh do...
Hilary Stone

Well I've had another great week over there, including some travelling to meet people (Hi Kieran), and a plan is starting to form.

I have to chat to the CCC All Ireland Rally organiser, but assuming that it's the last weekend in June, the basic outline is as follows:

Meet up on the 21st June somewhere in North Wales, either at that night's camp site, or somewhere an easy afternoon's drive from there.

Sunday and Monday see a bit of Wales while travelling south through the country - this will give those who can't make Ireland a chance to join in if they want.

Tuesday take the afternoon Pembroke - Rosselare ferry, then spend the night at Ladies Island camp site, about 10 minutes from the port - I've stayed here and it's a good, full facilities camp site. This will also give those who wish to cross to Ireland by a different route the chance to meet up with us over there - good routes from Dublin etc.

Wednesday - Friday will involve making our way across the bottom of Ireland, then up the east coast where I can now say there are some fun roads to travel along.

Saturday and Sunday will be joining in as much (or as little) as we want with the all Ireland Rally.

Monday - Head over to Roscrea, Co. Tipperary, where I know of a good camp site between there and Shinrone, Where Mum has rashly invited us all to a BBQ dinner!

Tuesday - Depart for Dublin, Belfast, Rosselare or wherever you are crossing from (easy access to most of these from here) to hit the ferry and home.

I have deliberately chosen Tuesday for the ferry crossings as they are the generally the cheapest days of the week. I have amassed quite a few details of campsites, several of which also have either hostel or B&B accomodation on site (for those who don't do canvas), which I am going through now to find the most suitable sites for our needs.

If you have a choice, and cost is a factor, go for a diesel motor, as I found it was around 10p / ltr cheaper than here, while petrol was up to 5p more!

While you don't need a passport, you do need some sort of photo ID for the ferry - they rarely check, but I was pulled over and checked on the way over this time.

Over the next few days I'll try to put up more details of route, costs etc. but in the meantime, here's a quick pic: 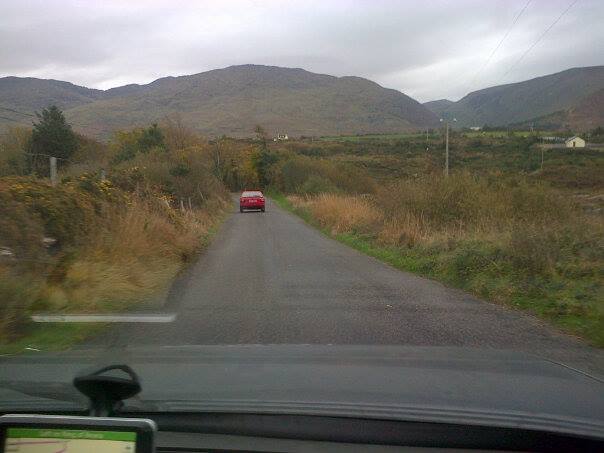 Looks like a fun trip. Can't do it myself (shame on me!