It seems that with age, the contacts in the switch deteriorate and cause a voltage drop - leading to significant dimming of the dashboard lights when you brake, or a non-start situation if the starter won't turn. All four circuits in the ignition switch can be bypassed with a set of four relays, leaving the switch simply to carry the low switching current required by the relay coils.

Arguably this is curing the symptoms (of poor contacts) rather then the root cause, so while it may not be a perfect solution, given spares availability, it may be a realistic 'best' fix. Any resistance present in the contacts will be less significant - i.e. cause less voltage drop - with the smaller current needed to operate the relays, minimising the problem. Additionally, the relay coils will probably operate with a much lower voltage, probably approaching 6 V so the point at which voltage drop actually becomes a problem is less likely to be reached. Also, because the switch is carrying little current, the deterioration of the contacts will be much slower and instead will occur to the contacts in the easily replaced, universal 4-terminal relays.

With the aid of a section of loom cut from a scrap car (thanks Jaba!) this is what I've made. You could do the same with standard male and female spade connectors, but it's a little more fiddly to wire in plus they are the less common 4.8 mm type.

Dimming of the dash lights when braking is now minimal, and I've suffered no more failures to crank the engine over.

interesting Mat - I'm wondering what are the four circuits...? I have a simple mental picture of 1- accessories on/off, 2-ignition -on / normal running position where everything is alive in the car & 3- crank/starter motor. Steve
Top

That looks like a possibility in Timex's future - I think I may be buying a lot of relays in the next few weeks as I suspect the headlights aren't performing as they should either!
Mike Sims
BX 19RD Estate Mk1 - Timex!
BX 4X4 Estate - Oh god, I've done it again!
BX 17RD MK1 - it called to me!
BX14 TGE, - SOLD
XM Turbo SD,GS Club Estate,Visa 17D Leader,HY Pickup,Dyane Nomad,Dyane 6,2CV AZL,Falcon S,Trabant P50,3x Land Rovers (88" series 1,109" series 2a FFR,series 2a Marshall ambulance),DKW F7, Lambretta LD150 x 1.5,Mobylette SP93,Ural Cossack,Ural M63,CZ 250 Sport,Honda Varadero 125,lots of bicycles & tricycles including (but not only) Sunbeams,Higgins & Bates!
Top

Mike, this particular mod won't do anything for the headlights, and indeed won't make any difference at all if your ignition switch is in perfect condition. I've heard some people suggest putting relays in everywhere as if they will magically cure every problem! But to me this does make some kind of sense, as it's taking load off what could be a weak link.

Steve, there are two circuits which become live in the 'ignition on' position. It could simply be they designed it this way to spread the load over two sets of contacts in the ignition switch, in which case 3 relays may suffice if they could take the total current. From memory, fuses 1, 2 and 3 are directly fed by the ignition switch with the rest of the ignition controlled circuits fed via original relays. I can't remember which circuits are which but it would be logical for each contact in the switch to feed a separate fuse; the starter motor being unfused.

Kev, I like the look of the micro relays and have used some before, acquired from a scrap Vauxhall. 20 amps *may* be pushing it a little though, depending on which circuits are fed directly? I think the heater blower is one of them, which on AC cars has two motors. Hadn't used Beal before but yes, a lot cheaper than VWP!

Sorry Mat I wasn't clear - Timex has it all! Dipping dash lights when the brakes are on (or when the indicators flash for that matter) occasional refusal to start (currently cured by shorting the connections on the solenoid when it happens) and headlights that aren't as bright as they should be (particularly on dip) still, only another 5k before I hit the 1/4 million miles! I'm going to start by wiring a couple of relays into the headlight circuits, then see how I go from there.
Mike Sims
BX 19RD Estate Mk1 - Timex!
BX 4X4 Estate - Oh god, I've done it again!
BX 17RD MK1 - it called to me!
BX14 TGE, - SOLD
XM Turbo SD,GS Club Estate,Visa 17D Leader,HY Pickup,Dyane Nomad,Dyane 6,2CV AZL,Falcon S,Trabant P50,3x Land Rovers (88" series 1,109" series 2a FFR,series 2a Marshall ambulance),DKW F7, Lambretta LD150 x 1.5,Mobylette SP93,Ural Cossack,Ural M63,CZ 250 Sport,Honda Varadero 125,lots of bicycles & tricycles including (but not only) Sunbeams,Higgins & Bates!
Top

Ah, I'd wondered if that's what you meant after I posted. On mine I'd wired a supply from the ACC position on the ignition switch to the radio, so it would turn on and off with the ignition. But the voltage drop was getting so significant that occasionally, depending on what was turned on, the voltage on the switched supply to the radio would drop below its trigger threshold when you braked and it would turn off!

I'd suffered the no start situation before, and mounted a relay on the injector pump which sorted it. In one way that was a good solution as it minimised the length of cable the starter solenoid current had to travel along. But after a year or so, on hot days I think the relay suffered from the heat as it would sometimes failt to crank over when stopped at a petrol station for example. Fine after a longer stop though. So that relay has now been removed and I just have the mod detailed above.

Here's the photo showing where I mounted the relays, under the steering column: 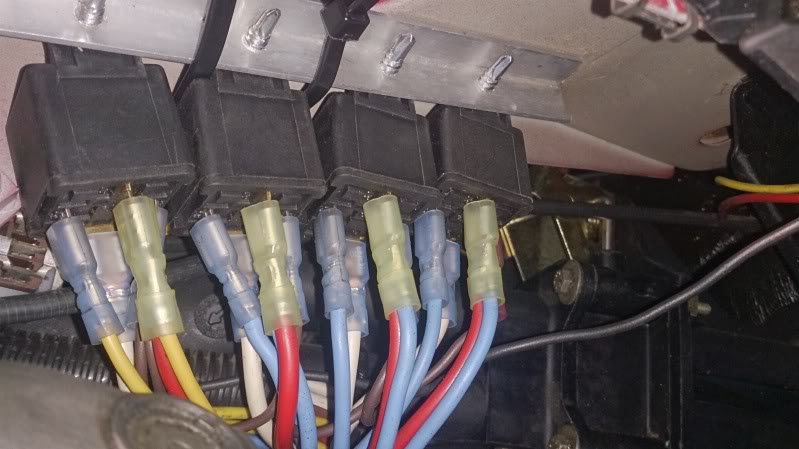 It would be easy to build in an immobiliser by putting in a hidden switch into the earth wire from the relays if you so wished. But I doubt whether BXs are in massive danger of being stolen

Well it was 9 years ago but the local oik tried to steal my 14RE... could not break the steering lock so if that still works with the relay mod you are probably still OK. Damage to my steering column was interesting as I attempted the first corner, sudden massive stiffness as the inner connected with the shroud....heart rate increased rapidly....
Top

) and could snag on the steering column. It would then wrap itself around the shaft, and tighten up the more I turned the steering!

Tinkley wrote: Well it was 9 years ago but the local oik tried to steal my 14RE...

That's about the same time someone tried to steal mine!

They damaged the drivers window seal in trying to gain access but fortunately did not succeed in getting in (maybe were disturbed?).

mat_fenwick wrote: It would be easy to build in an immobiliser by putting in a hidden switch into the earth wire from the relays if you so wished.

I'll have to do this mod properly on my car at some point. I have done it on the 3rd ignition wire & done like you have suggested, put a immobiliser switch on it. I put the relay under the heater & put the switch under the drivers seat. Then my brother took my keys & tried starting the car

mat_fenwick wrote: mounted a relay on the injector pump.

I wonder if sticking a starter relay in the scuttle might be the best of both worlds? Carefully done it would look like a standard fit as well.

Never had a barrel fail, but then i dont think i've had a BX on an original barrel. The curse of valvers perhaps?

I did the same on two BXs because the lock failed, it works perfectly!

Dont forget to use a fuse for the relay control circuit and also remove the locking bolt from the steering lock(!!)
Top
Messages: 18