Here's where I'll post the ongoing tale of my 1992 BX GTi automatic and 1991 BX 16 TGI Break, which live with me in Salzgitter, Germany.

The GTi was acquired for 950 Euros in 2010 from Chemnitz, Germany. Here's my earliest picture of it, taken on the way home next to Dad's C5: 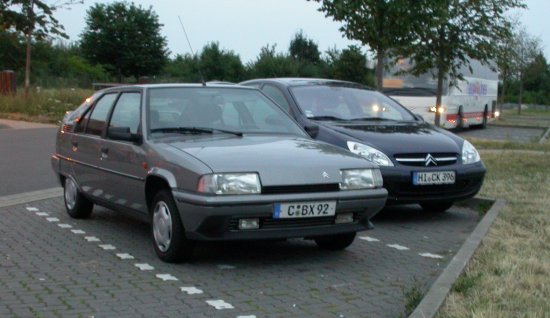 Originally nicknamed "Grisu" after a comic character (too complicated to explain why), it has since become known as the "Ölquirl" (roughly "oil beater" in the same sense as "egg beater") due to its torque converter

Things that have been repaired or replaced since, in roughly chronological order:
- GTi alloys with Continental 185/60R14 tyres (very pleased with those)
- New brake discs and pads all round
- One-spoke steering wheel instead of the original, but un-Citroen-ish three-spoke "sports" wheel
- Replaced central locking remote with matched sender and receiver
- New spheres all round, except accumulator which still seems fine. I opted for early BX 14 spec spheres (500 cc, 55 bar, 1.8 mm front / 400 cc, 40 bar, 1.1 mm rear) as per this site, and am very pleased with the ride now. Handling is not quite as defined as it was, but good enough for me -- despite the GTi badges, spoiler and wing, I see this car as a comfy cruiser.
- New rear arm bearings
- All-new exhaust system from cat backwards
- New brake discs and pads again (parking it for a year will do that)
- New front brake hoses and strut return hoses

All in all, the car has proven to be not quite as reliable as my previous one, a 1987 Golf GTI 16V, but has more than made up for it in fun, style, comfort and character. I'm seriously hooked, and despite two old Volkswagens still in my life ('70 Bug convertible autostick, and '83 Panel Van Diesel highroof) I cannot imagine a BX-less time for me in the foreseeable future. 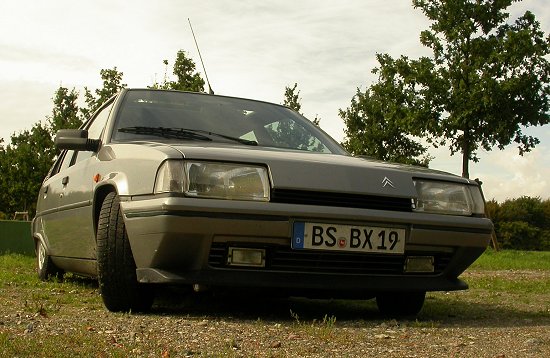 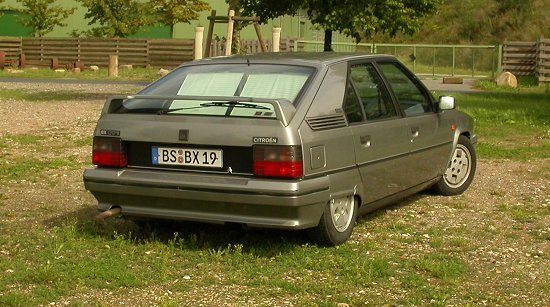 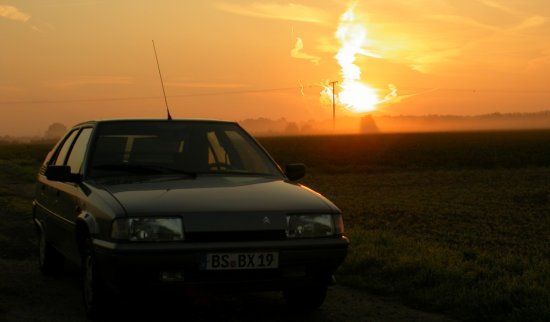 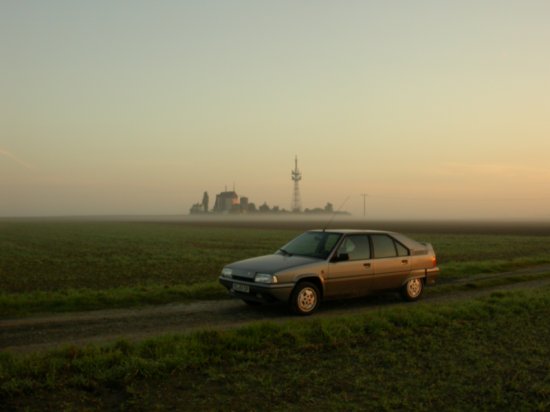 The upcoming winter will be the GTi's last one as a winter car. It's replacement as such is my 1991 BX 16 TGI Break, notable for its price (50 Euros), its mileage (an alleged 500,000 km) and its complete lack of luxury: manually operated untinted windows, no central locking, no power anything. It is going to stay like that, but will be fitted with TZI seats soon (the original ones are incompatible with my back, and also completely shot).

The only acceptable photo I have so far: 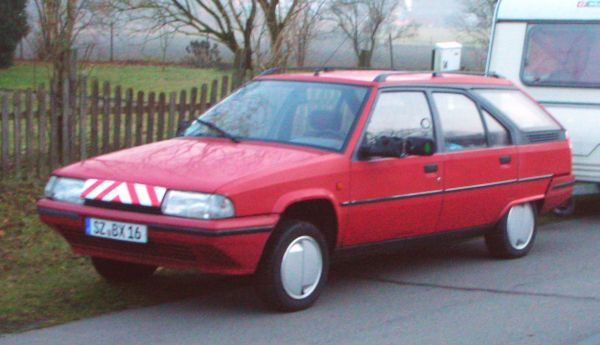 It's nicknamed the "Streifenhörnchen" (literally "striped squirrel" due to its stripes, actually "chipmunk"). The stripes are my doing -- both for safety reasons and as the first step of a planned decoration project, on which more when it's done.

Lots to do on that one, most of which is identical to the GTi's "done" list above, most notably rear arm bearings, spheres, and exhaust. But it will always remain the workhorse.

Lots to do on the GTi as well, of course. It never stops, does it? But then, at least there'll always be something to write about

Also planning some modifications, nothing drastic, but it will not be kept 100% original. (I'll keep the bits though, so if and when my taste changes, I can always go back to its original state!)

Very pleased to have found this forum and to have been warmly welcomed. Thank you! If there's anything I can do (translate, locate or relay parts from German sources, whatever), feel free to ask. Also feel free to pester me if I don't reply promptly, as I've been known not to do.

The first week of driving the GTi again is over, and as expected was a blissful experience. I had forgotten how nice this car is to drive. It reminded me of an old Top Gear (UK) episode, in which the three presenters had each bought what they thought to be the best British car (on a budget). James "Captain Slow" May, having opted for the Rover 75, was predictably ridiculed by the others who had bought some sort of sports car. James, tired of their explanations on how theirs would be the best cars for dashing around (or whatever the wording was), replied that, the traffic and road conditions being what they were --

These ten words, for me, sum up what owning a BX, and especially a GTi auto, is all about. With its wonderfully comfortable ride and enough power to accelerate briskly without having to noisily rev the engine, I think this is one of the most waftable cars in its class, regardless of era. And yet, it doesn't completely insulate you from the outside conditions the way big, modern cars do: both engine and wind make themselves clearly heard, you can feel the cornering in the steering wheel -- you just don't need to suffer from the waves and bumps like the other drivers do. And the handling, even with the soft suspension spheres from the early 14 RE like I have fitted, is still positive enough to confidentially waft along at three-digit speeds, even in mph.

I dare say James May, had he ever driven one, would have approved of this car.

The Break passed its TÜV inspection (German equivalent to an MOT, I think) on Wednesday, and as of yesterday is registered again! Two years closer to its 30th birthday, which is the age needed to register as a historic vehicle here, which means less tax and insurance. Hopefully we'll make it, the Break and I.

The GTi auto meanwhile suffers from a severe case of broken engine. But fear not, the donor car (also a GTi auto) has already been purchased.

Always something, isn't there?

The GTi engine is toast

Lost all oil on the autobahn and went solid as a result. So I needed a donor. Here at its arrival last weekend:

Another GTi auto, some small parts missing, paint completely shot, no TÜV of course ... 225 Euros. Next on the agenda: Check both GTis thoroughly for rust, and then decide which one to keep. Yes, the grey one looks much better, but looks can deceive ...

If the silver one turns out to be the keeper, I'll just repaint its roof and rear quarter panels grey (ETB gris dolmen), and put all the doors, hoods, bumpers etc from the grey one on it. Bit of work, but it would save me the engine transplantation. I'll report on the final decision when it's made.

Meanwhile, some more pictures of the "new" car: 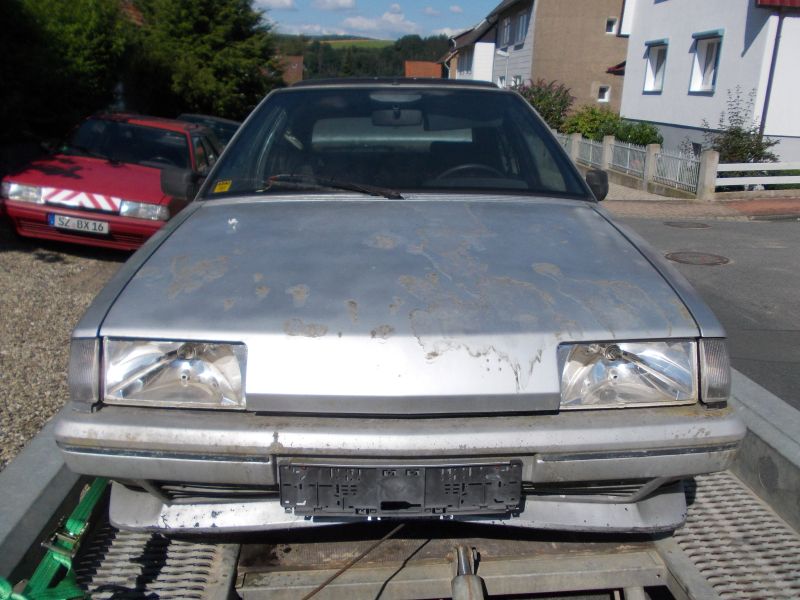 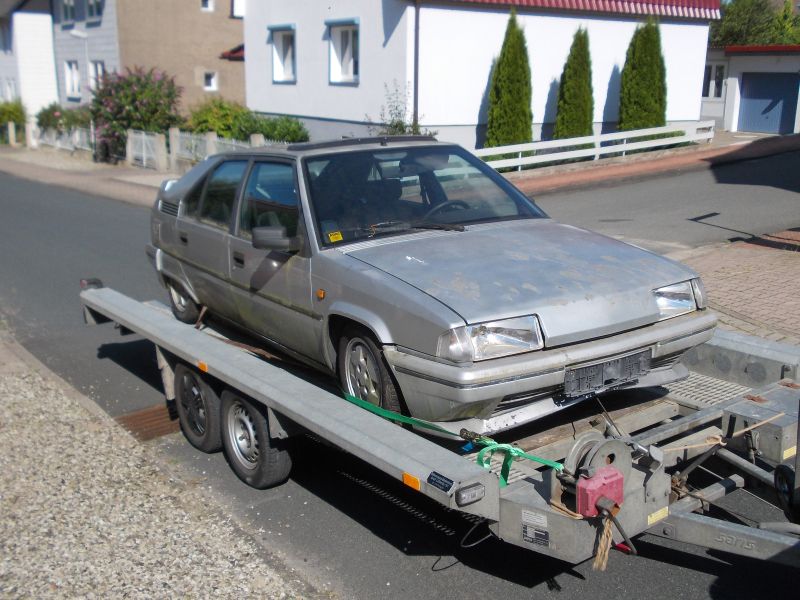 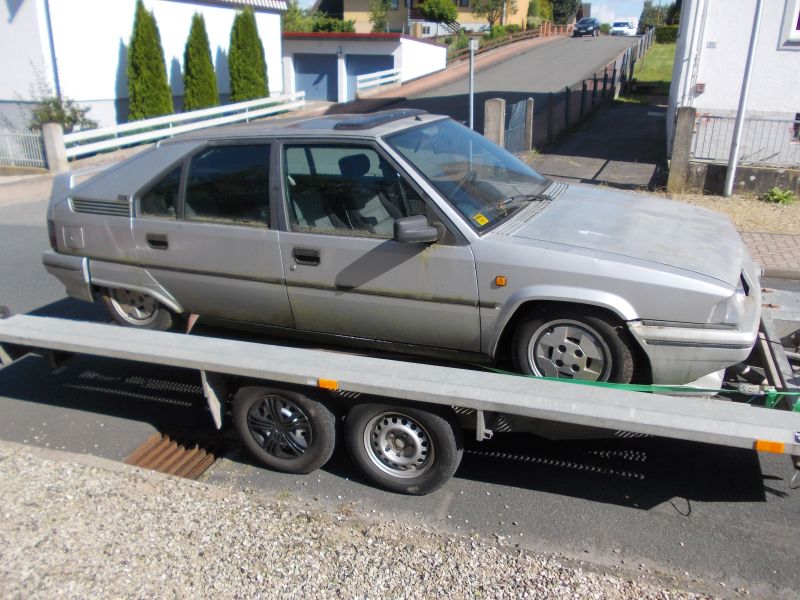 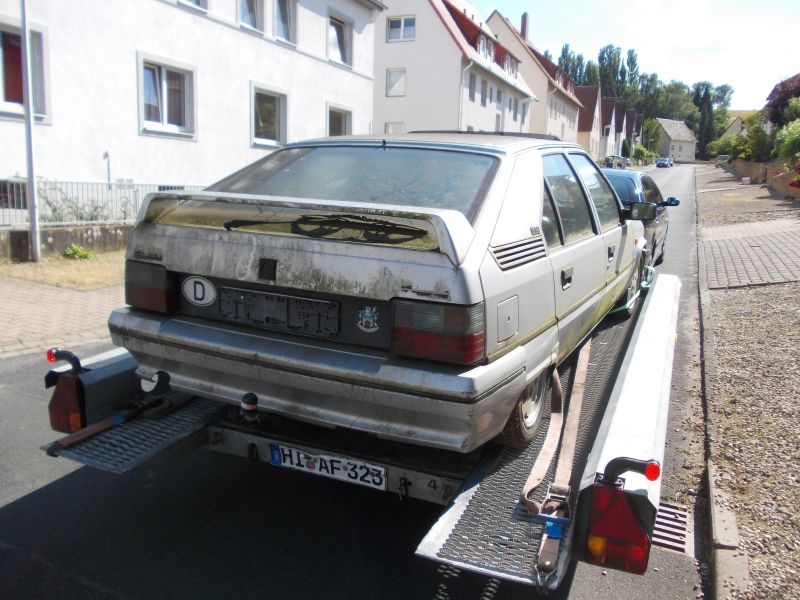 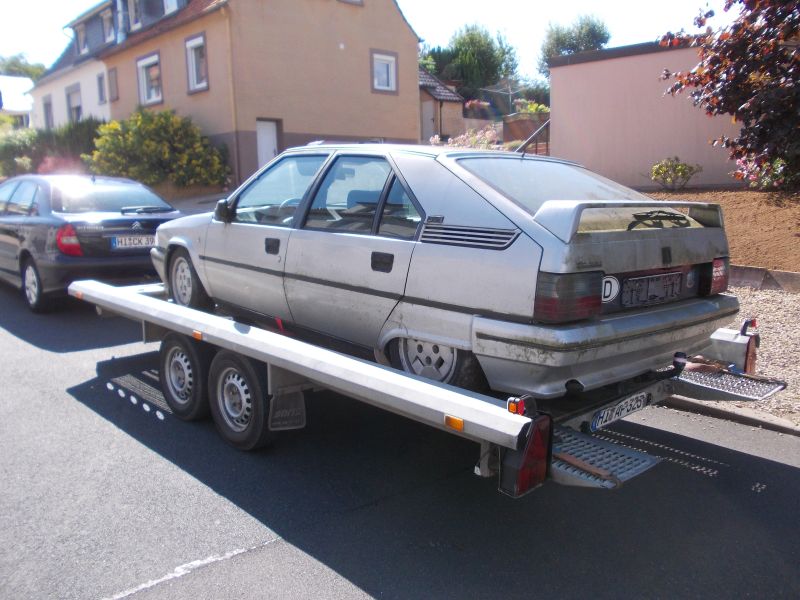 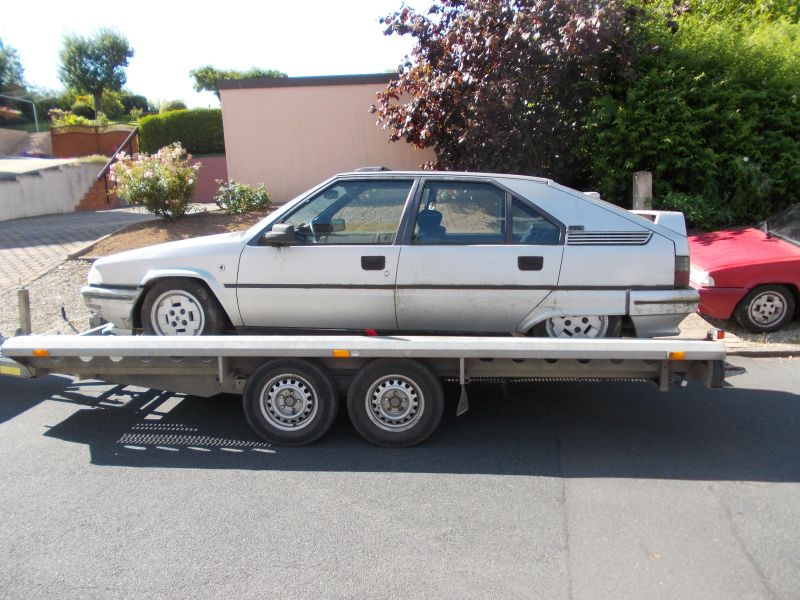 Good luck with its execution.

They are also substantial looking number plate carriers on the donor, are they a normal accessory for cars in Germany? Perhaps number plates are a personal issue item?

Plate carriers are almost the norm in Germany. Seems it's against our pedantic souls to drill holes in the brand new plates to affix them to the car

I have some on the grey GTi too, but there's a reason to that which I will illustrate once I've gotten around to actually implement the idea. On the Break, the plates are just screwed to the car, which is the more elegant solution in my opinion, but which is seen almost exclusively on customized cars these days.

Stood for two years whence I fetched it. And the door handle protector thingies are not the only goodies -- six inch wheels (16V), a split folding rear seat with headrests, and the sunroof wind deflector are all very welcome additions to whichever GTi I'll end up driving. And the Break will receive the power steering and the black dashboard. Nothing goes to waste!

The silver GTi is doomed. I discovered plenty of rust in the door sills, especially at the bottom end of the B pillars, and also a big hole in the front left wheel well. Also, there's lots of non-functioning stuff, window lifters and sunroof and mirrors and such, the debugging of which is more than seems worthwhile. The dolmen grey one is completely working (except the engine of course), quite freshly TÜV inspected, and also much nicer looking.

The silver BX's engine hasn't been started yet (starter motor seems to be shot), but I turned it with a wrench on the camshaft bolt, and it feels good (and makes promising sounds) when doing so. Timing belt and plugs also look well. I'm really quite confident about this.

Good call, probably. I'm gonna do that, thanks.

Anything else I should change while I'm at it? New fluids, fuel lines and belts go without saying. Any hydraulics that are known to fail, easier to change with the engine out, and not too expensive to replace while not yet broken?

Water pump and possibly the Octopus would be a good thing to do as well.

Clutch? Much easier with engine out, even if an auto...